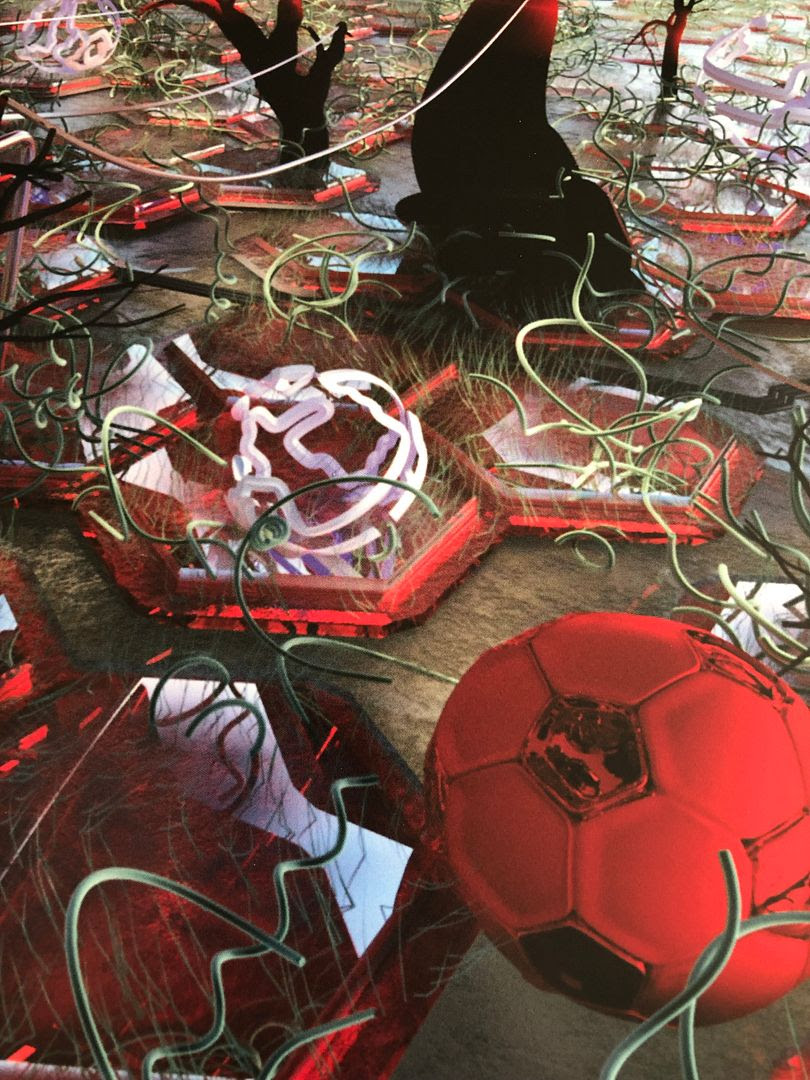 At first this sounds like it will be an audio collage of various sounds spliced together, which we have heard from Fire-Toolz before, but it then goes into these beats which makes it feel like something out of the 1980's or 1990's (that's vaporwave!) and then there is static as if we are changing the radio station.   New wave guitar notes now bring out something like The Cure before they get magical and this is a sound collage but just in a different way.    Beats ane electronic water dripping take this into a place like techno, the pace quickens now and it feels like something from the film "Run Lola Run".

Vocals come out somewhere between alien and screaming and when mixed with this dreamy synth electronica, I feel like this could be the sound best crafted by Fire-Toolz, a signature sound if you will.   Ringing and static, we change the stations not stopping on anything for too long.   The next bit of vocals sound more like screaming than anything else as this takes on that Marilyn Manson feel (Which is "Anti-Christ Superstar" era for sure, though I wish Manson did an electronic album like when Smashing Pumpkins did) This now just floats out into the aether, blissed out and dreamy electronics.

I enjoy how the singing can seem so destructive, like something from a metal or screamo song and then the music takes on a lighter synth pop tone- it reminds me of K-pop at times even- and yet somehow they just work together.  I've heard bands in the past (not naming names) who have tried to combine two different genres of music which felt like opposites and they'd end up with songs that had two different feels to them, but Fire-Toolz makes these sounds morph together to form one sound and that is just something not enough artists are trying to do (nor have they ever)

The electronics aren't quite video game, but they're close.    If you took something that was vaporwave- and the examples seem to be everywhere- and added in something screamo you wouldn't quite be able to get this sound.   It's not a matter of taking DRAKULA DOLPHIN and adding in the vocals from Scary Kids Scaring Kids.   Each individual element of these songs is much more deliberate and specific so that even when it comes through like harsh modem squeals it is done so to reflect that single moment in time.  Rarely do artists create music where every aspect of it comes out so perfectly on an individual basis and yet still maintain an equally (or great) creation as a whole.

Dreamy whirrs make me feel like we're in a, um, dream sequence and not enough television shows and movies use this sound any more to create such a feeling.   Sax plays through and it feels like we're on in the fog for some reason, some sort of movie like "Lethal Weapon" where Mel Gibson is telling us how he doesn't care about being alive anymore.    Synth tones bring out fast paced beats now which make me feel like we're either running out of time in a video game or just plain running.   These tones come out like you're stepping on some kind of pad and each one lights up as it creates sound.

A little of that pinball sound to remind us we're vaporwave still, to keep us grounded, but this music is really so much more than that.    The flip side opens up with ohms and a serious sense about it, like a television show about doctors from the 1990's.     There are sounds of percussion with this one which I cannot quite place but it adds a faster beat to the slower inhale and exhale which, as always, Fire-Toolz just seems to make work.   More magical sounding tones come out next and this just gets taken to a whole other plane.    This slips into a nice groove and the song becomes what the kids call a banger.

A samurai sense can also be found in these songs, like they're about to fight but then the electronics break down and it feels like the samurai somehow have lasers and, yeah, it gets complex even for me when I'm thinking of someting between Bruce Lee and Star Wars.    I wish there was a way to describe music that feels like it's going to lead you into something else.   The ambient tones here make me feel like we're going into that Underworld song from "Trainspotting" but it hasn't quite kicked in yet.    I'm not sure how to think of that as a genre outside of the wind chimes blowing on through now.

With a deeper sense of bass now, the vocals return now and we're back to that genre of music I think Fire-Toolz has really come into as their own.   The electronics come and go now, robotic and then with a sax before the beats start right back up.    This is one you can dance to now.    The screaming returns as well and if anyone else is creating this similar sound... No, I just do not believe that they are.    Drones bring acoustic notes with them now, as it has calmed now.    We are floating like angels.     Beats slowly come back and this has a "Streets of Philadelphia" sense to it because that's what I want to start singing for some reason.

Bells are ringing in the distance and static comes screeching through to break up the calm.   Computer sounds continually remind us that this is vaporwave.   The beats just break down so heavily now it becomes something that you have to move to whether or not you want to, I find myself nodding my head along without even realizing it.  "Knight Rider" type tones come through in a full panic.    It's space pinball now.    Rapid fire beats ascend into space and then a cat meows, which is quite possibly the only perfect way to end this record. 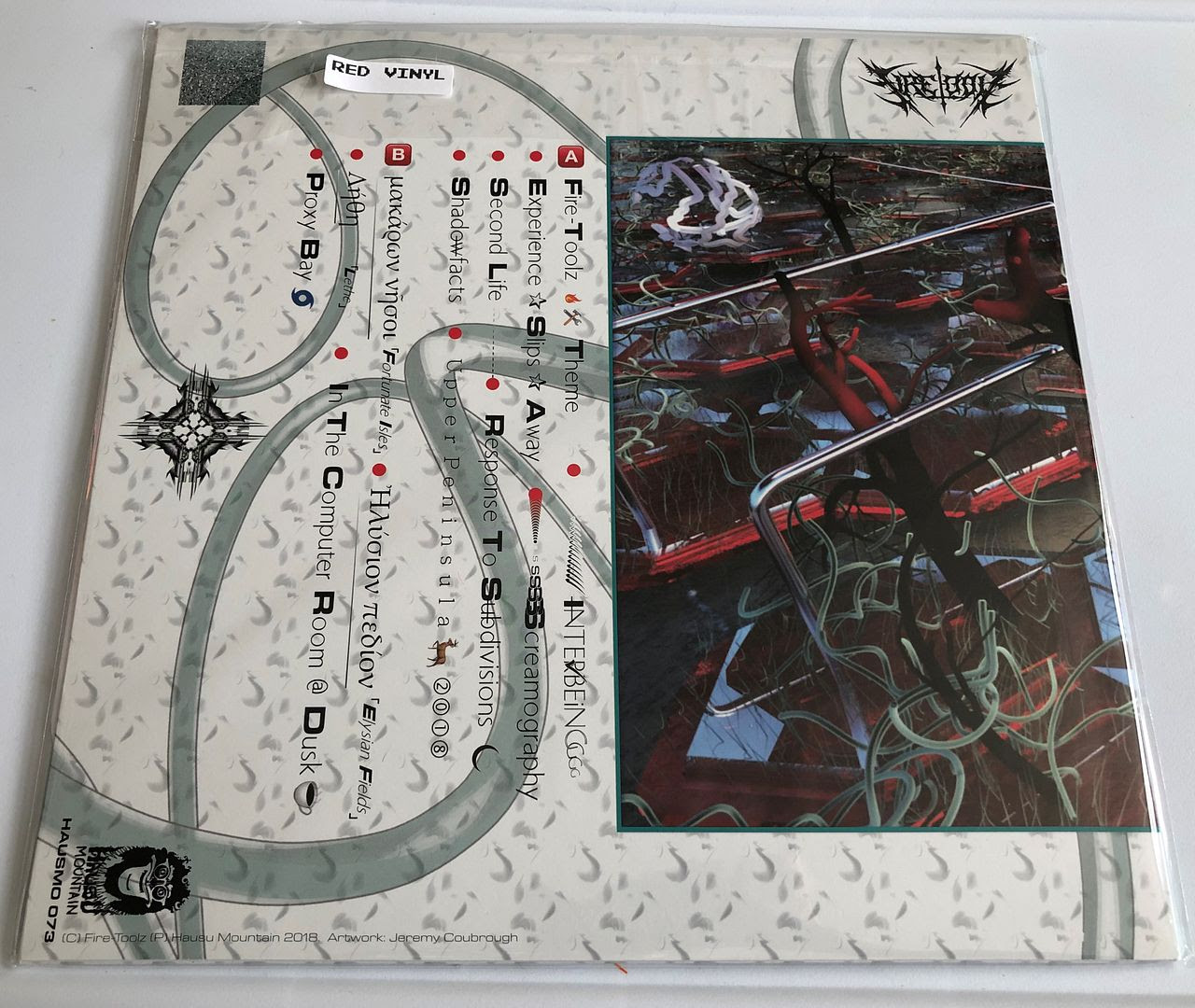 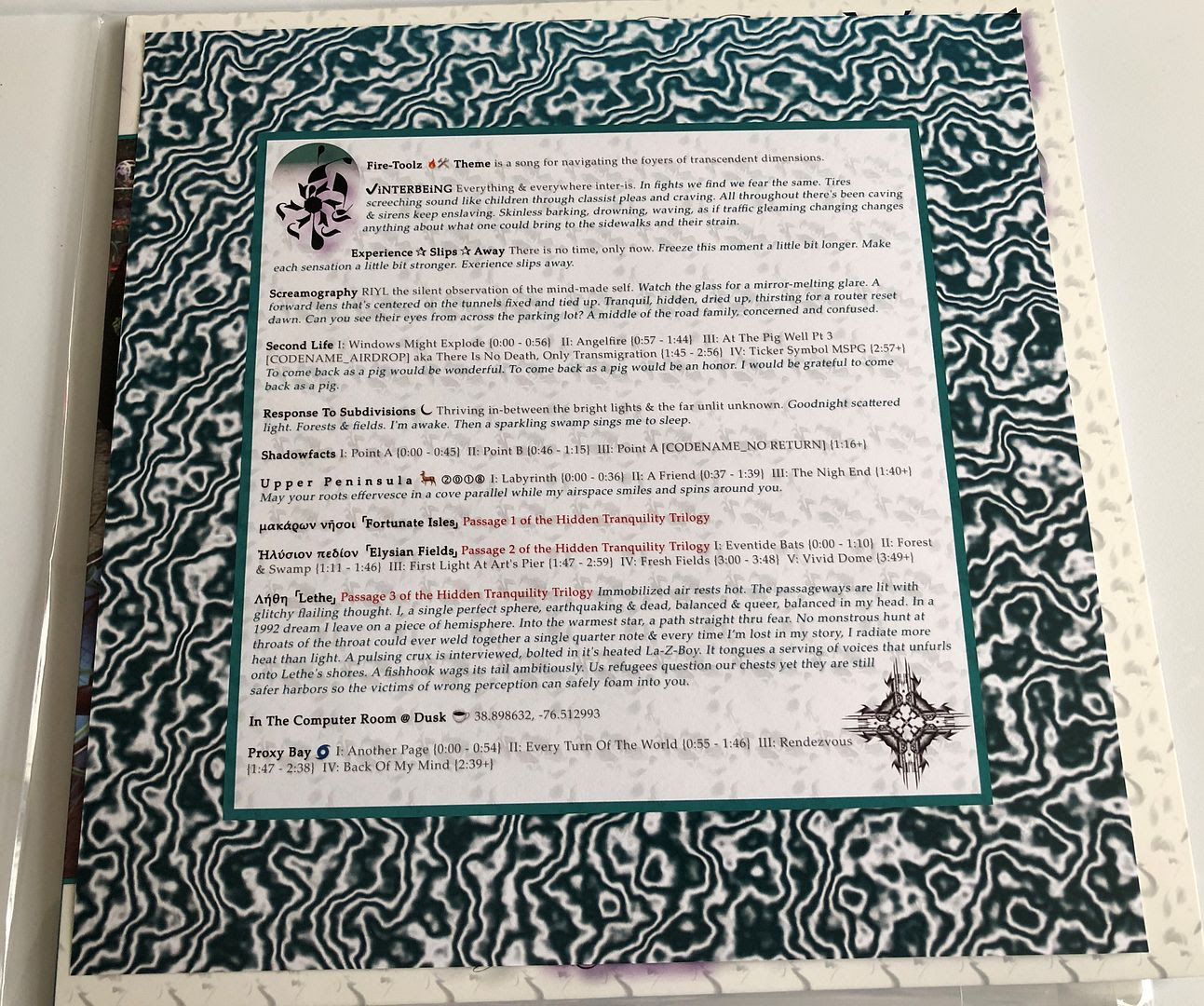 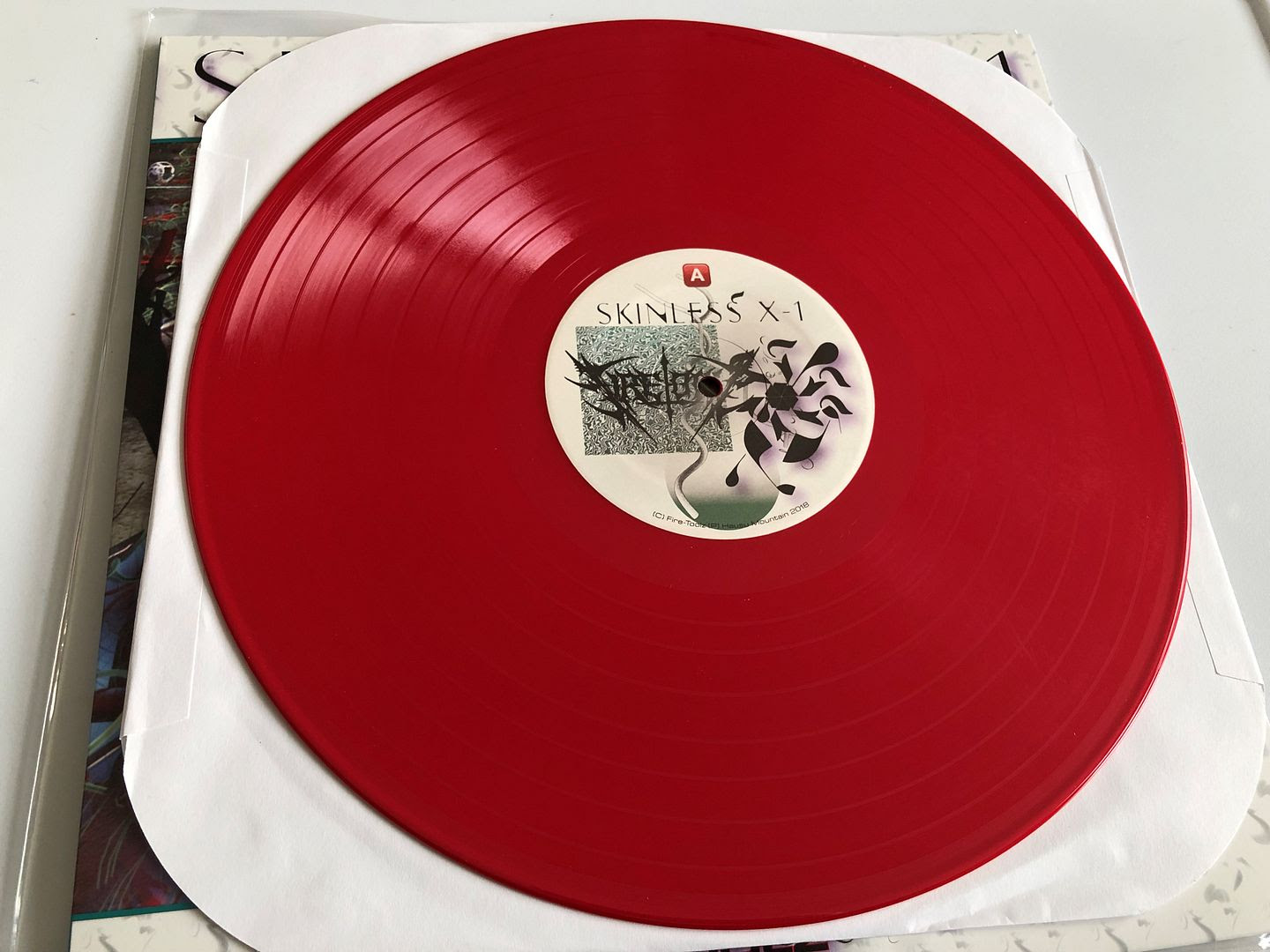 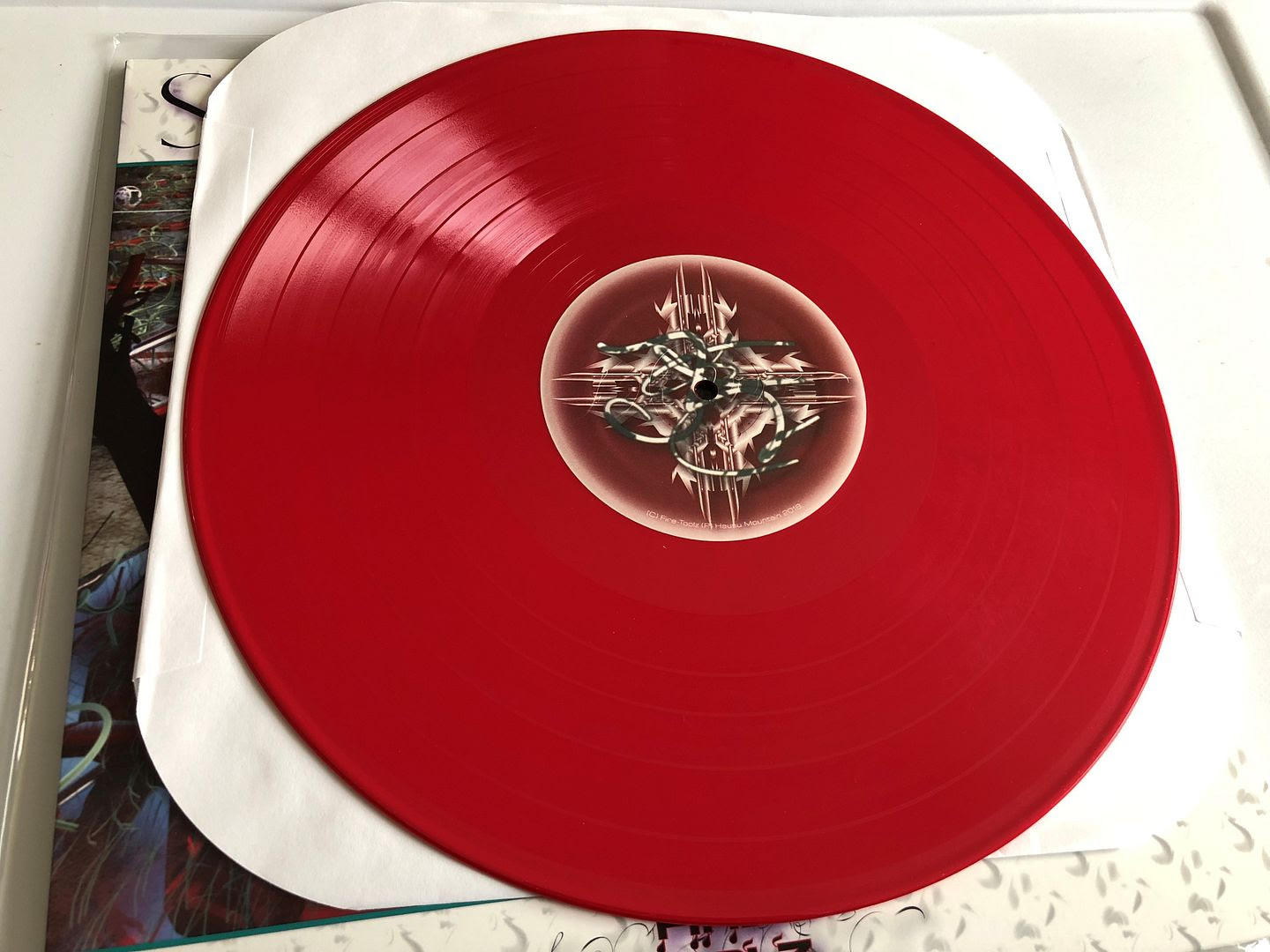