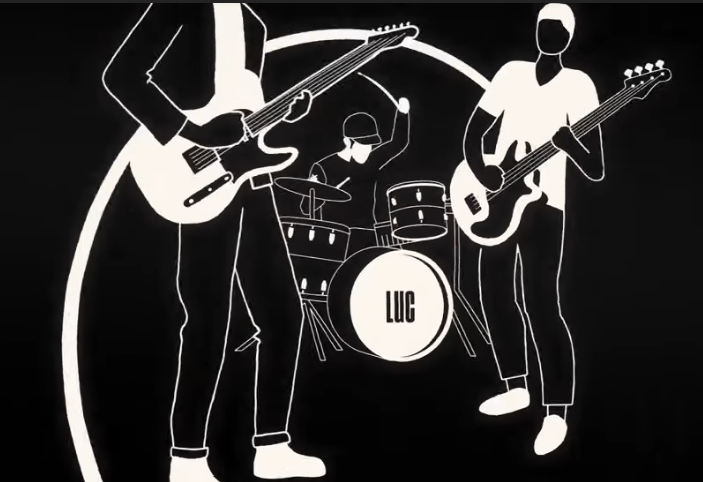 This might be one of those things which is only funny to me, but I first opened this track through Spotify and pressed play.   While the song was playing, I also opened a link for the video and anyone who has ever opened a YouTube link knows how much they love autoplay.    Before I could press pause on the video, Tiffany Haddish began talking about GroupOn and the way the words formed with the electronics of this song somehow seemed fitting.   So for a moment- but only a fleeting moment- I felt like I had slightly made a remix of a small piece of this song and it was wonderful.

When you reach the point that Luc has with melody, it becomes difficult to describe the sound overall.    On one level, it has this electronic feel like Garbage but at the same time it has those hooks that really draw you in like Metric.   The way that it rocks in this start and stop way though also reminds me of a band such as Ok Go, who I only really know for a few songs and a live performance I once saw years ago, but the similarities are there simply because it's what first comes to my mind.   Along with these pleasant chords come lyrics which you should also be paying close attention to, quoting as well.

While the video has a sense of minimal animation it somehow sets the tone for this being something you can dance to or rock out to, depending upon your mood.   It isn't so much that it is simple as it is effective and in the heyday of MTV this would've been an innovative concept so of course now, all these years later without someone really doing something like this before, it stands even more true.    Though it can be said about most music videos which are put together well, I feel this particular style makes this one an even more serious work of art.

Sometimes I will admittedly listen to a song and feel like it's fun but not really understand it.   As with "Glow", you can put this song on in a pop sense where you listen to it while driving or exercising or something to that effect because it is faster paced and really gets my energy going.   But when you listen to the lyrics- and I mean really listen to them, which I often don't do- this is a love song.   Sometimes such things can go over my head, I'll admit that, but I somehow managed to catch this one and even if you're not happy and in love you can at least move to this one and appreciate how it doesn't really sound like a lot of artists out there right now and really also leaves you wanting to hear more songs by Luc.

Posted by Joshua Macala at 2:16 PM