This is such a delightful movie from the 1980's.   It follows many of the tropes that horror movies are not supposed to do anymore and things which they are often made fun of for ("Scream" covered a lot of that) but I still can't help but love this movie because it's so formulaic but yet somehow also so perfect.   "The Unnamable" follows two groups of college kids who are kind of related but not really (There's this one scene where they cross paths in the library) and boy are they stupid.   You think someone in this movie would have some common sense, but that seems to evade them all.

What happens is, these guys are talking about how this monster lives in this house and there's no real word to describe it so he does refer to it as being "unnamable".    After a lot of other nonsense, they finally go to the house with the hopes of finding said monster.   First off, this one guy goes and he dies right away so his friends are looking for him and they end up in the house with this other group of guys who also have girls with them and it's just too many people and none of them are smart enough to get out of there.

When the group of guys + girls first arrive in the house, the door locks behind them.   One of the girls says so and one guy goes "It's probably just stuck" and then some other guy is acting the fool in another room so they all go after him instead of saying, like, you know, "Hey, we're stuck in here, this might not be the best situation.  Instead of running around and exploring let's work on an exit strategy".   They also have a conversation about how everyone only likes one of the girls because she has big boobs, so it's hard to feel sorry for them when they die.

It reachees this point where these guys go looking for their dead friend because they realize he didn't go home for the weekend or whatever and so why would they go into this house looking for him, by themselves, and not call someone and do something more officially with police or at least campus security I don't know.   You have to throw a lot of logic out in this movie and like I said, it follows a lot of the "No, don't go up the stairs" and then they go up the stairs type of ideas.

I'm not sure how to describe "The Unnamable" as a monster.   It has hooves but stands on two feet.   It could be something from Narnia, but it could also be something from a Guillermo del Toro movie.   If anyone was going to remake this, I'd want it to be GDT, but that is one of the things which makes this film so special.  As some of them die early on, you see pieces of this monster, the hands for example, but you don't really get a good look at the full villain until the end.   It's that anticipation, that build, to be like "I gotta see this thing" that really makes the movie.

On top of that, you know when people would see this in theaters they wouldn't be able to go home and tell their friends and family "Oh, it's this giant ape", like they would about King Kong.   No.  That's the beauty of it all!  You would have to say "Well, I can't quite describe it, so you have to see it for yourself".   Even some near 30 years later as I type about it right now, there is a photo on the cover of this Blu-Ray but you still don't get this full experience of the movie- which you should- without seeing "The Unnamable" move and breathe.   And its butt. 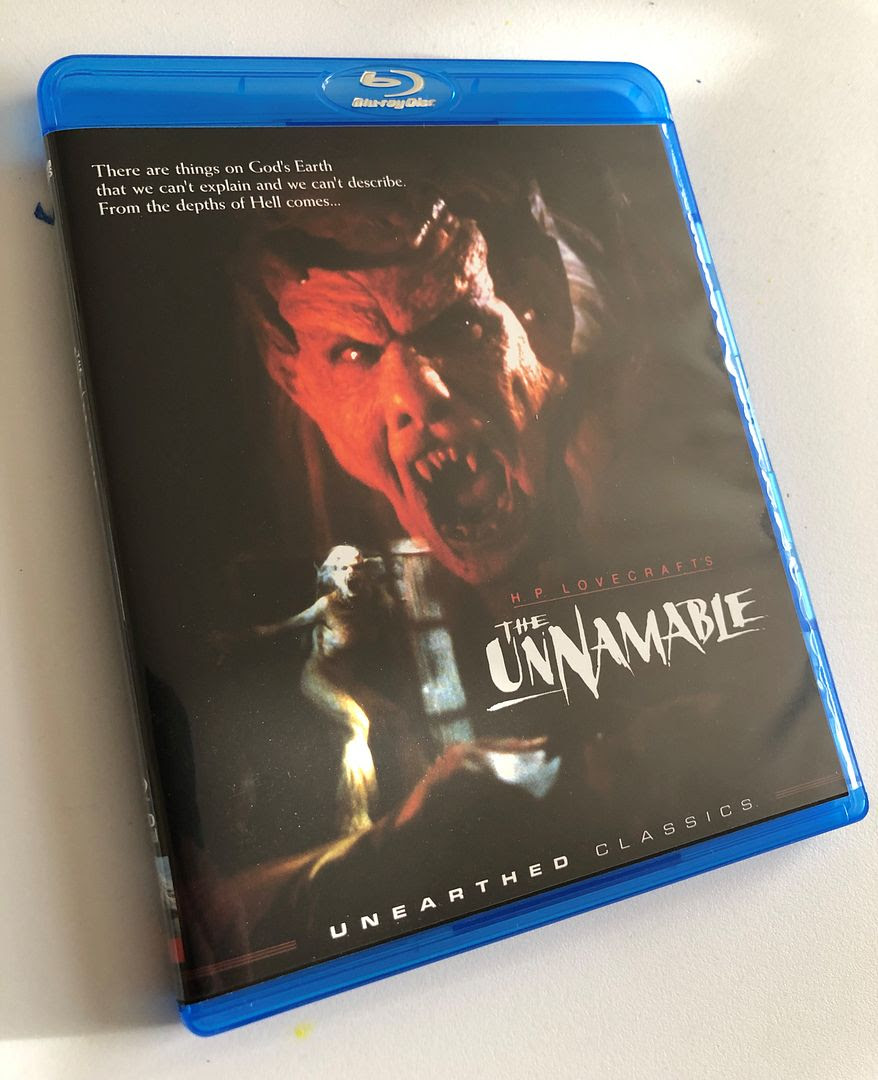 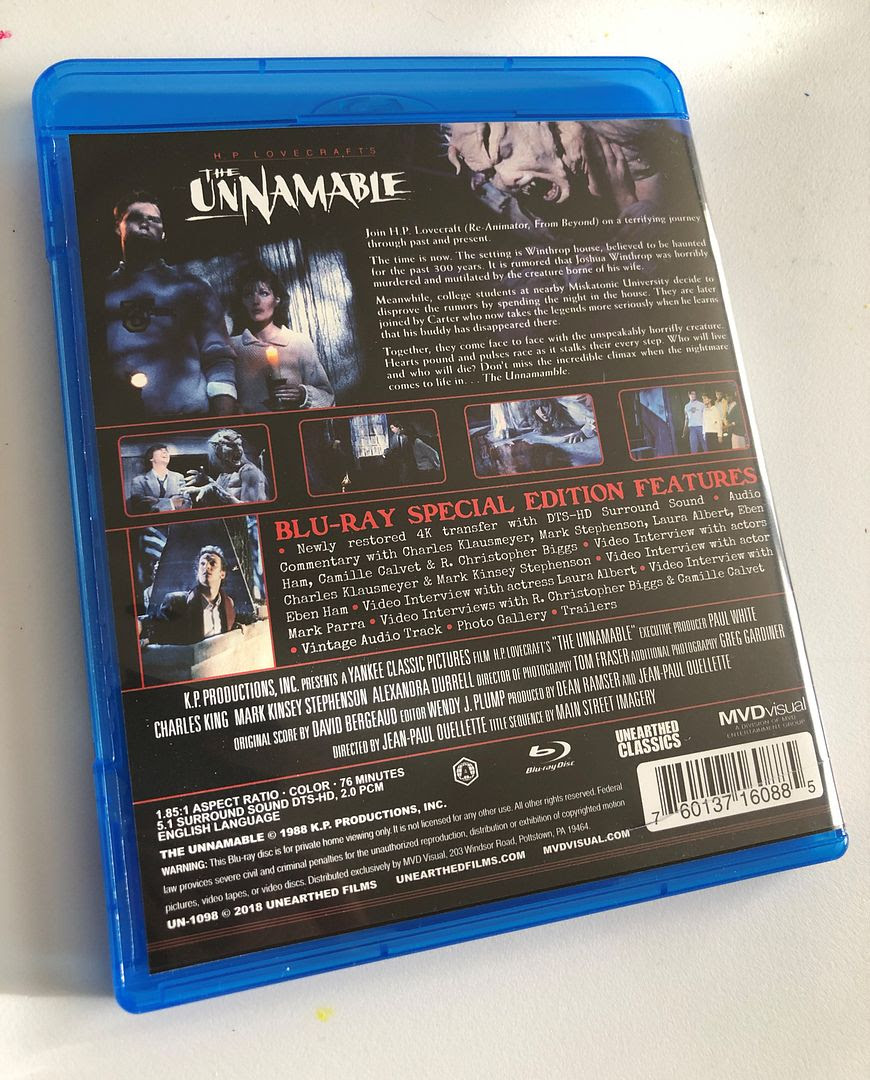 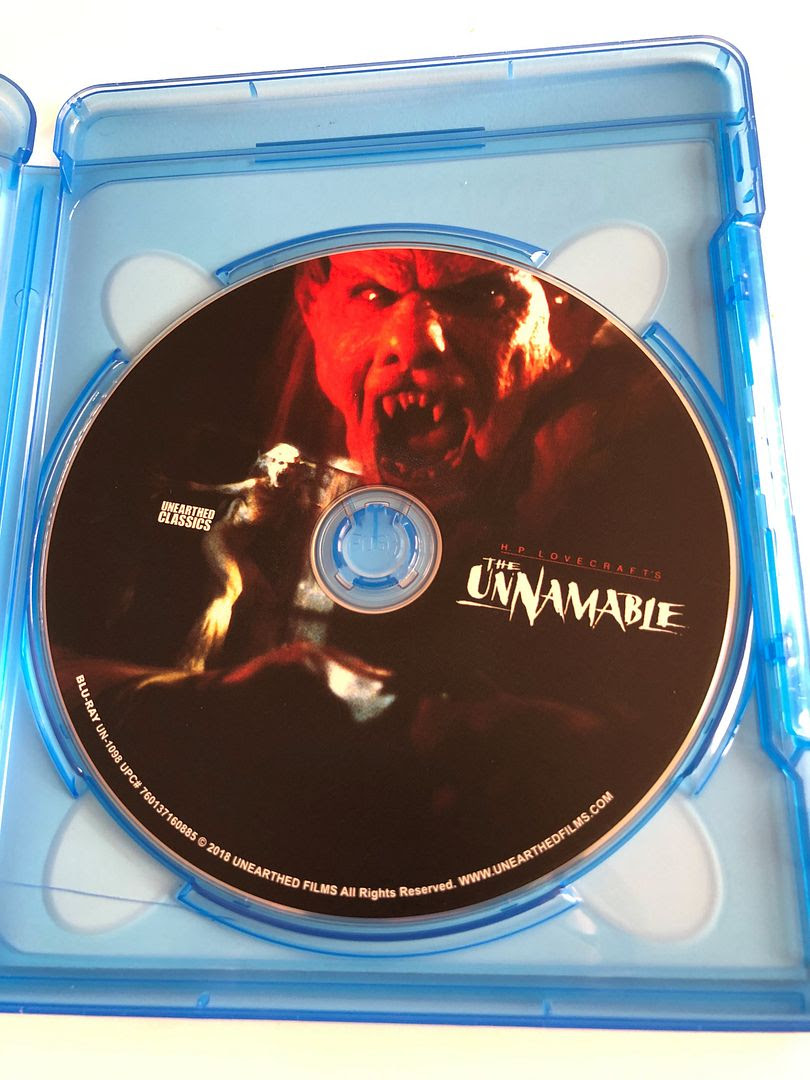 Posted by Joshua Macala at 1:23 PM