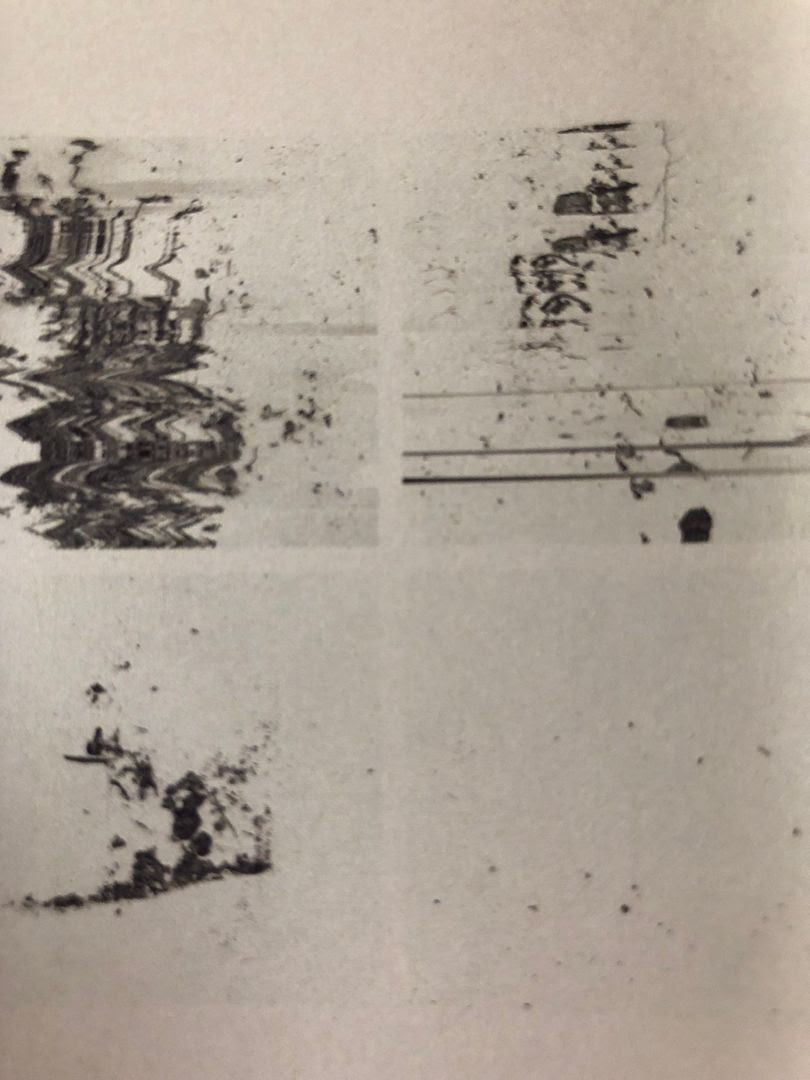 Dark electronics thunder down.    Beats are distorted as the skip and create a haunted feeling.   This somehow turns into tribal beats with western guitars and there is also singing.   I still remember the first time I heard vocals on a German Army cassette-- I was so confused because I thought it had always been (and always would be) instrumental and then I thought maybe I had missed something lately and it somehow switched over or maybe there was something I'd heard before that had vocals and just forgot.   Such is the mystery of German Army.

Tones like Pong come through on a loop with drum beats as an audio clip repeats every once in a while.  I am reminded of this Jon Cryer movie called "Hiding Out" for some reason.    Quieter, X-Files type tones come ringing through now.   There is another audio clip now, but it isn't on a loop it's just telling its story.   The sound grows with it and there is a bit of magic in it, such as that "Masters of the Universe" movie.    Though, eventually, this audio clip seems to break down into whispers, tucked away in the back it becomes harder to hear over the music and feels more like someone speaking in a crowded room where you would have to ask them to speak up or simply someone talking behind your back.

Beats now bring out ambient tones which have a great deal of bliss behind them.    Audio clips or spoken words are back once again.    This is slightly like Tears For Fears.    Hollow beats now bring about western guitar notes and it feels like we are about to get into trouble.   In some larger level, this track could have started with an audio clip simply saying "Darkness washed over The Dude" and it would have made perfect sense.     This seems to fittingly end the first side because it leaves us in a position where we have not reached a conclusion yet, as often times we feel as if the character needs to overcome this adversity.

Great guitar riffs, vocals and true beats begin the flip side.   There is a certain industrial sound in here I enjoy but in terms of industrial music it is also a bit lighter and the guitar notes pierce through a bit louder, which is an interesting twist on something you might have heard before-- equal parts The Cure, NIN and David Bowie.    Tones now come through in a sequence where wavy vocals accompany them.   It feels robotic but also oh so pleasant.   The beats really begin to stomp now.   For some reason I am also now reminded of The Wild Side.

The way the next set of beats come out makes me think that we are building blocks for some reason-- not in any particular way so much so that it feels like some sort of elaborate video game, an advanced version of Tetris on some level I suppose.   This builds and grows into one of the strongest songs on this cassette and not just because the overall weight of it feels so heavy.    The next song has a series of beats and an audio clip (or perhaps spoken word piece) on repeat.   It feels rather artsy but also like it is coming through in a serious way with one of those giant bells like you'd find in a tower on top of a church.

As beats fade from the background to the front there are these alien landing type of synths and this one grows slowly, synths so familiar we feel like we have been to this planet before and yet it remains unexplored until now somehow.    We're into this new beats loop now, which is slightly more upbeat and less feeling like we're going to be taken to some other planet to be dissected (Although this could just be the clever disguise the aliens want us to fall into so they can abduct us)  Words are being spoken in the background of all of this.   It could be that final warning from someone that we needed and if you don't understand and take it seriously you might just be next.