Movie Review //
Here to Be Heard: The Story of the Slits 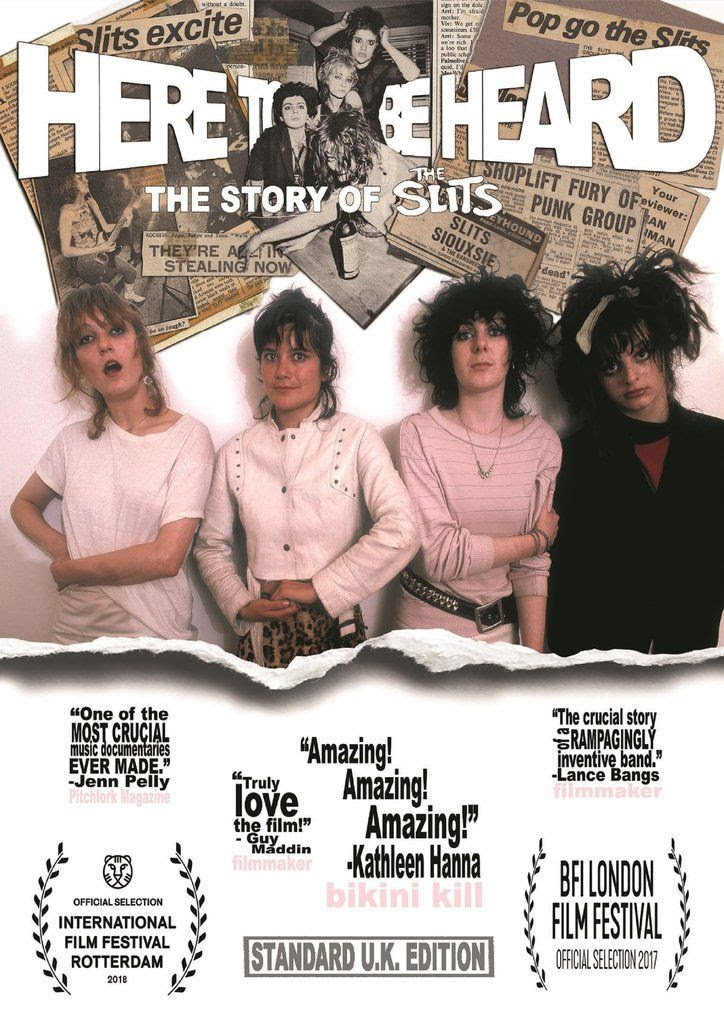 If I've never said this before I will say it now but I am someone who watches documentaries because I enjoy learning new things, but I also will watch just about any documentary you want me to that is about music.    That being said, I also firmly believe that not every artist has a documentary made about them and that is for a rather specific reason.   I feel as if it is only those special artists who stand out from the rest who get to have the documentaries tell their story further, beyond the music.

How do you describe The Slits to someone who has never heard of them before?  I told someone I was watching this documentary and my short paragraph of explaining it said that The Slits were an all girl punk group in the 1970's but eventually became reggae/experimental later on, constantly redefining the way things were not just for women but music on the whole.   Isn't it funny how you look at The Slits now in 2018 and they just seem so... I don't want to say common because Ari Up would still stand out in a crowd today if she was alive, but they were doing things back then no one else was doing which feel more commonplace now.

Aside from the style, aside from breaking of fashion barriers, The Slits created incredible music.   One thing I feel I constantly struggle with is comparison points for musicians who are female.   There are only so many you go back to-- and it's not that bands went unnoticed it's just that for such a long time, as this documentary points out, music (and punk) was dominated by men.   Watch as The Slits discuss bands like Sex Pistols and The Clash.   They went on tour with Buzzcocks, for example, but you won't really see as many other women in the scene, it wasn't like "Well, of all the other bands of women out there we chose the best to go on tour with us".  No.  They were really the only ones.

Ok, I'm willing to admit that if you know your punk history they weren't the *only* ones so much as that they were the definitive ones.   People came out to see them based on word of mouth.   This is something where it's before the Internet, before Bandcamp and SoundCloud, so people weren't saying "Oh yeah, I streamed some of their songs and they sounded cool"   They didn't even have a record out and people were showing up to see them and really digging what they were doing!    The very concept of that in 2018 would result in an artist having next to no one come out for their show.

Many times, I wish music went back to what it was like before The Beatles, before there were records.   If you wanted to hear an artist, you had to go see them perform live because there was no recorded music of them.   But even just to go back before the Internet... It's crazy to me, because even in the late 1990's when I began going to see live music all the time I had people give me sampler CDs so I'd go see a band based upon knowing one of their songs.   And then there was Napster.   But it's difficult for me to think about seeing a band based upon word of mouth and I wish we could somehow get back to that.

The Slits were a special band.   They still are.  Everything that everyone attributes to Sex Pistols and punk rock should be attributed to The Slits ten times over because they just weren't opening doors for women, they were opening doors for music.   I actually prefer the later sound of The Slits to their earlier music but it's all just so wild and crazy you have to really take it all in, song by song.   Even in 2018, these songs still hold up-- they're still somehow top of the class if they were released today.

At the end of this film is a quote by someone saying that you should do whatever makes you happy.   You should find your passion and embrace it, and other people might not like it but it will be rewarding for you.    That really kind of hit me hard.   I know I messed up the paraphrasing on it and I don't even remember who said it, but it still had this profound impact on me because it's what I'm doing with my life.   I'm not the most popular writer by far, but I'm fine with that.   I think we all need to kind of dissolve the myth of popularity and do what makes us happy.    That and hear The Slits in every band we listen to from now on.
Posted by Joshua Macala at 12:05 PM