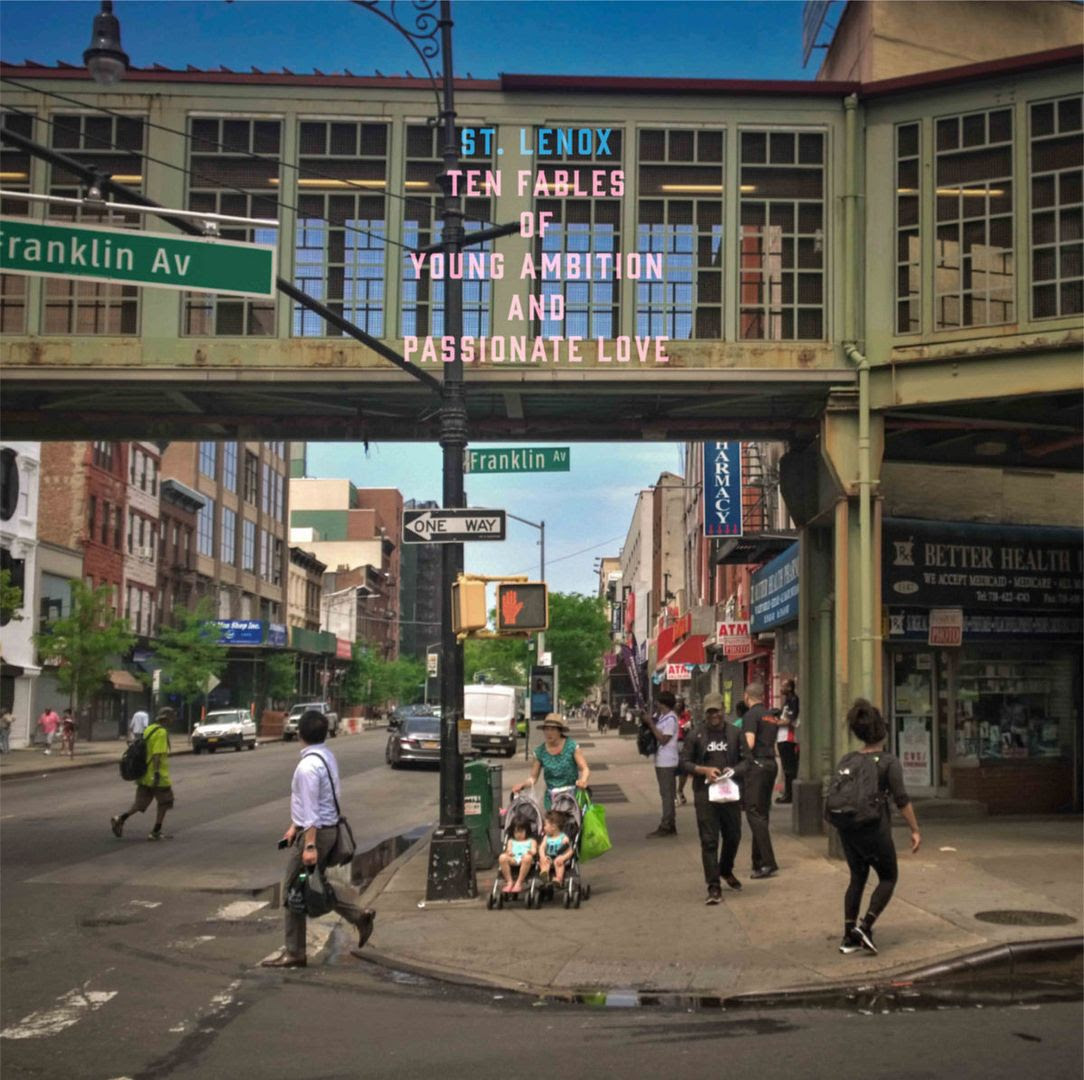 When I first listened to St. Lenox, on this album, my first impression of how the vocals sound is that they remind me a little bit of Barenaked Ladies.   See, there are two sides to this though.   On one hand, the artist behind the name St. Lenox is merely singing in a style which they find comfortable and therefore you can't really say someone sounds exactly like someone else unless they really try to, so Barenaked Ladies just becomes this reference point of something which is well known.   Also, when I worked in a record store in the late 1990's, I listened to Barenaked Ladies full albums and outside of their radio songs they aren't that bad.

So, with that out of the way (because I felt like I had to state it but also explain it) I immediately fell in love with St. Lenox on the first song of this album because it's just so raw.   With that unique voice, the song "Hashtag Brooklyn Karaoke Party" (Which, I'm in, send me the evite) has storytelling lyrics (which remain throughout the album) and it just is so passionate as he pours his heart out in each and every word.   "Heartbroken on the dance floor at the gay bar singing songs about gin and whiskey" is a line that I will never get out of my head and this is catchy in the sense that after a few listens you'll be singing along.

After the first song I want to clap-- I'm confused when I don't hear the applause because it sounds like it was live, right in front of me.   There are a lot of words in these songs as well, but you'll get used to them as they go and slowly sing along with the hooks and then begin to also take them verse for verse, word for word.   In that regard, the lyrics do remind me a bit of Say Anything and how breaking down their lyrics to sing along can be a similar process.

Bell tones begin the song "First Date" and so this isn't just a raw acoustic album, though if it was I think I'd rather like it (If there is anything such as a "live/unplugged" album out there or one in the works please let me be the first to know, thank you)  Pianos now remind me of Billy Joel and even a little bit of Springsteen as those vocals continue to define this album.   One line that sticks out to me is: "You know I always wanted to meet a farmer" since my family is from farmers (My mom's parents and even one of her sisters) but I just as much enjoy the line: "I write poetry to the music in my mind"

"You Have Got To Feel It" has a saxophone and is just smooth while "More Than Romantic Love" just cranks out the soul and tugs at my heartstrings, a particular phrase I thought I would never type, especially about music I enjoy.   Yet somehow, underneath this all, there seems to be a sadness.   I don't know if it's the fact that it is lonely within the music or if it is just the fact that this music can make you feel so many emotions but it makes me want to cry, but in a good way.

Dreamy grooves in "Apparently" brings us line like "I feel like the shock of it has dulled my emotions", but it's easy to pick out a line without the context.   The other lines around it also help to drive home the point and as such you really need to hear the full songs.   It's a story, not a phrase.    "Brooklyn Supredream" has a faster paced electro feel while "The Hungry Years" starts with piano keys and those big beat drums, somewhat like The Rocket Summer, before going into MIDI.

In a strange confession, this album taught me what a troubadour is.   There is a bookstore with that name I've been to, but now, because of St. Lenox, I've finally decided to look up the word.   Still, there was this time in the early '00s where bands like Taking Back Sunday and Brand New came out and were called "emo", but I'd say St. Lenox should be the true definition of "emo" as everything about this album is emotional.   This is not for the faint of heart and after listening to it you feel different.