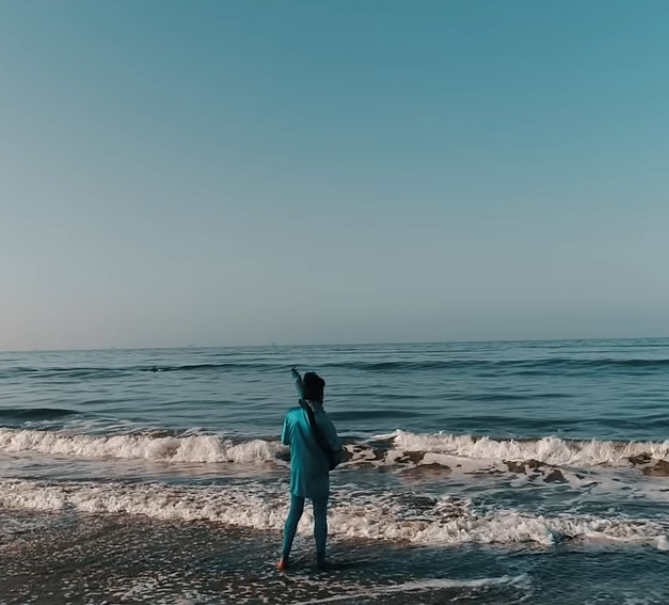 The overall vibe of "Liquid Lotus" is one of relaxation, meditation.   It starts off with what sounds like a sitar and singing, though the singing is really more of a chanting.   It kicks in with this great drum beat and then there are actual words being sung- verses and a chorus.    There is a strong Indian vibe to this, which I've also most recently said in my review of the Swimming in Bengal cassette, and there is a bit of similarity here but this has a much more traditional Indian feel to it in some way and it feels really also like something you could dance to; it has that rhyhtm which just makes you want to move.

"Liquid Lotus" also happens to be seven minutes in length, so after about halfway through (maybe the four minute mark or so) the singing stops and it just seems to kind of slow down before it fades out.  The interesting thing about this is that I like to use the beginning to kind of relax but the part with the vocals which is more upbeat makes me think more of something where you can really center yourself with the world and then it can fade out into meditation again as well.  It is in this way that I do prefer to think of the middle section as somewhat of a mantra.

In the video, we can see the artist sitting on rocks and on the beach as well, as it begins with the calming of waves, the soothing feels of sands and, well, who doesn't just look at that image of water and sand and feel calmed by it?    Everything in this video related to the artist is also blue.  I'm not going to read too far into this if I shouldn't, but I believe it's because of the connection between ourselves and the Earth, which is mostly made up of water (blue) and the sky (also blue)  I also like how he is barefoot on the beach, connected with the Earth in that respect.

Some shots show him on a rock where you can see the ocean and the sky with him and they all seem to somehow blur together, which is likely the point.   This feels like a very minimal video- one person, only a handful of settings- but it speaks volumes.   Then it switches over to a different camera lens, something to make it look a little bit older.   There is another character now, a woman, and things seem to have changed from being all blue to being more colorful.

As it begins to break down this woman begins to dance with a neon colored hoola hoop- it basically looks like a circle of light- and isn't it interesting how I watched and wrote about this song yesterday from LeeSun called "My Life" which has a video and features a hoola hoop in it as well.   Woudn't it be fun to make collections of videos based upon common themes such as this?   I think it would and I think it's far more than coincidental-- a sort of sign from the universe that you should be watching both of these videos like episodes of the same television series.

When the song begins to fade, after the singing, we return to the beach and then we are in nature with all of the trees.   The colors go back to the blues and it just becomes peaceful.   It has that visually relaxing image to accompany the music and I feel like this is something you would listen to at the end of the day to wind down and kind of find your center if you were particularly stressed out at work.   And yet I could imagine listening to this in the morning to start the day and set yourself on the right track just the same.

Posted by Joshua Macala at 3:30 PM