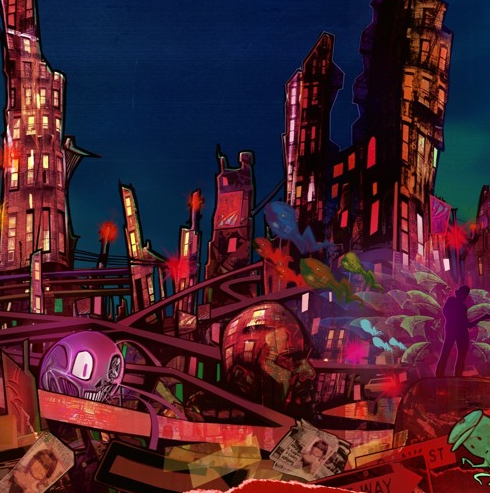 This begins with piano and drums which remind me a bit of The Cancer Conspiracy, but this first track is really more of an introduction (As it is called the "Prologue") and my early thoughts of this being neo classical somewhat remain true throughout the album- to an extent- but this song just really seems to open the doors to watch the rest of the album grow and expand throughout.

"Vodka Tea" really opens up this album with an upbeat rock sound that could be influenced by polka but also has a bit of that gypsy punk feel I love to it.    Somewhere between Gogol Bordello, Scattered Pages and even Devotchka this has that certain sound which I love every time I hear it.   "Bag Of Nails" has a more distinct rock sound to it, with these loud guitar riffs like something you'd hear from Hendrix.    "Sad Boy Summer" has some funk to it while there are words being rapped and it's kind of like Barenaked Ladies but something else a little bit harder as well.

A song like "Fast Response" has a heavier sound to it but also reminds me a little of Streetlight Manifesto.    There is a pretty straight forward jazz interlude as well, which just makes this album that much more amazing because it demonstrates the pure musicianship on every song.   "Whale Jail" is somewhere between Ricky Martin and The Stray Cats and if that doesn't sound appealing to you then I don't know what is because it's just so much fun.   In some ways this also reminds me of ska and/or Sublime.

Of course once I think this, you'll also hear the piano ballad "Arrows" which kind of goes against my previous thoughts.    "Let It Snow" is also not a holiday song (or about the winter really) and it has these lyrics near the end which remind me of Nirvana.   This just takes on such a big rocking sound by the end it is hard to ignore what is going on and after listening a few times you will find yourself singing right along.   This also only seems fitting as the album comes full circle and ends with this great piano-based outro.