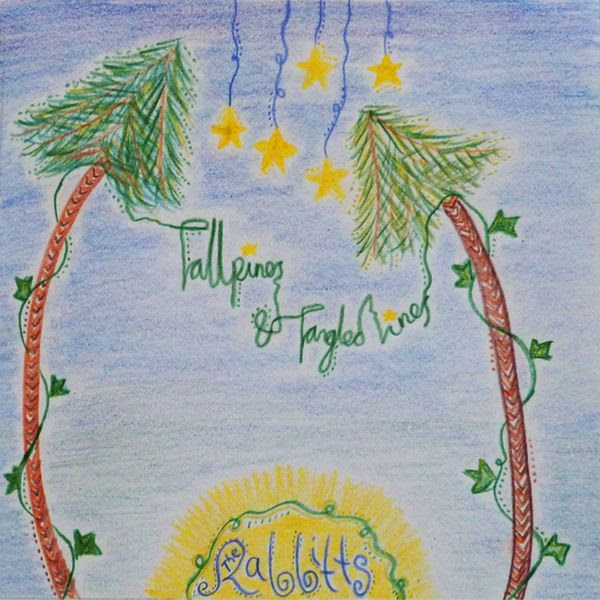 Music has that quality where it can make you feel emotions.   Sometimes, even if you're not angry you can put on an angry sounding song so that you can get energized.   Or maybe if you are angry putting on an angry album will help you work through that anger.  With the music of The Rabbitts, the general feeling I get from this is happiness.   It's a strange thing because I don't think people spend enough time being happy to realize it can get just as pumped as the angry songs and also help you work through the hard times.

While this can mainly be described as acoustic folk rock there are other levels to this.   On the surface it can sound like The Forecast (Who you may or may not remember) but maybe for those who listen to the radio it's a little bit closer to Of Monsters and Men, even though I don't listen to them other than the "hits" I hear here and there.   With a harmonica in place it can feel like Tom Petty or Neil Young but I just keep thinking of this as sounding like some great duo of the past.   Since I can't put my finger on which duo though (I think of She & Him and Johhny Cash & June Carter, which are both slightly accurate) I can only say that The Rabbitts have crafted a musical sound all their own.

What's interesting about this as well is that there are two members of The Rabbitts- Odhran and Lucy- and they share vocal duties throughout the songs.   When you listen to music with two vocalists they tend to either sing together (harmonize) or take turns.   With The Rabbitts though, the vocals seem to follow no real pattern from song to song, The Rabbitts once again making their own rules.   While they can trade off singing turns, sometimes it feels like they're singing in rounds and other times they sing together.   Sometimes though, when they're singing different things but at the same time is when I seem to like it most of all.

Going back to the idea of happiness with this album, there is a line in the song "Wild" which has stuck with me for some reason and it says that: "Happiness is only real when shared".   I never really thought about it before, but it has this philosophical sense to it where you have to imagine that you aren't really happy- you don't really know- unless you tell someone else.  I have very few people in my life, so I spend a lot of time by myself, but I at least tell one or two people, you know, "Oh yeah, I'm going to go home and watch this movie by myself" and that kind of confirms my happiness to them and to me.

At the same time I think that line stuck with me because it makes sense on two other somewhat related levels.   Firstly, it has that idea that if you're happy sometimes something as simple as smiling at someone can make them feel better, you know, you should share your happiness in that way-- pay it forward.    But perhaps the greatest meaning to it, which even I, the lonest of the loners will admit here and now in this review, is that, yes, happiness is only real when you are with someone else.   It could be friendship, family, whatever, but the people in our lives (Even if it's under five) are what makes the world go round.

"Swallows" is about rain and that feels fitting to me since it's been raining here a lot lately.   We've gone from 90 and hot to 60 and raining.   At times this reminds me of childrens music and not in a bad way.  It's something I'd play for a child because it's not something they'd be offended by, but it also just has that upbeat quality to it where you want your baby to be smiling and laughing.   But, it isn't like "childrens music" in the sense that I'd compare it with artists who are actually filed under that genre.

On #MusicVideoMonday I shared a video for "Luna Lupe", which I would take to be the lead single off this album, and as such when that song comes around in that country/folk type of way, it makes you feel like you're home.   You know, it's not something everyone knows or gets to experience but when you are grown and move out of your parents house but then go back there, you know where the bathroom is, for example, without having to ask.   If you've heard "Luna Lupe" (and you should have by now) then "Tall Pines & Tangled Vines" will have that same instinctive happiness built into you.

Posted by Joshua Macala at 1:19 PM