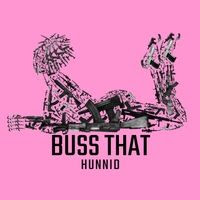 In my time listening to hip hop (since the 1990's) I've not heard anything like Hunnid before.   This is a single song called "Buss That" and it has a catchy chorus as it's just a matter of singing along with "Buss that, baby, buss that" and I feel like it could be a strong radio single in that sense-- because it has that pop appeal within the chorus but what it could be compared with in terms of other songs I've heard is not so easily defined.

The music feels like, it feels fun and free.   These tones behind the beats are like stepping on clouds or perhaps that old game Q-Bert.   This is where it gets difficult to describe because on one hand, a lot of rappers who want to be lighter these days use autotune and back in the day I'd think of like Heavy D, for example, having a song like this but it's still not quite the same.

From "shimmy shimmy" to "cha cha cha" to "da da da da" there are some sounds to sing along with that aren't just words but one of my favorite lines in this song- and life in general now is:

So whether you're going to dance to this song at a moderate pace, want to sing along with the hooks or just need to impress your friends, Hunnid has got your back and is an artist worth looking out for, yes, even just based on one song.   This is everything a single should be.