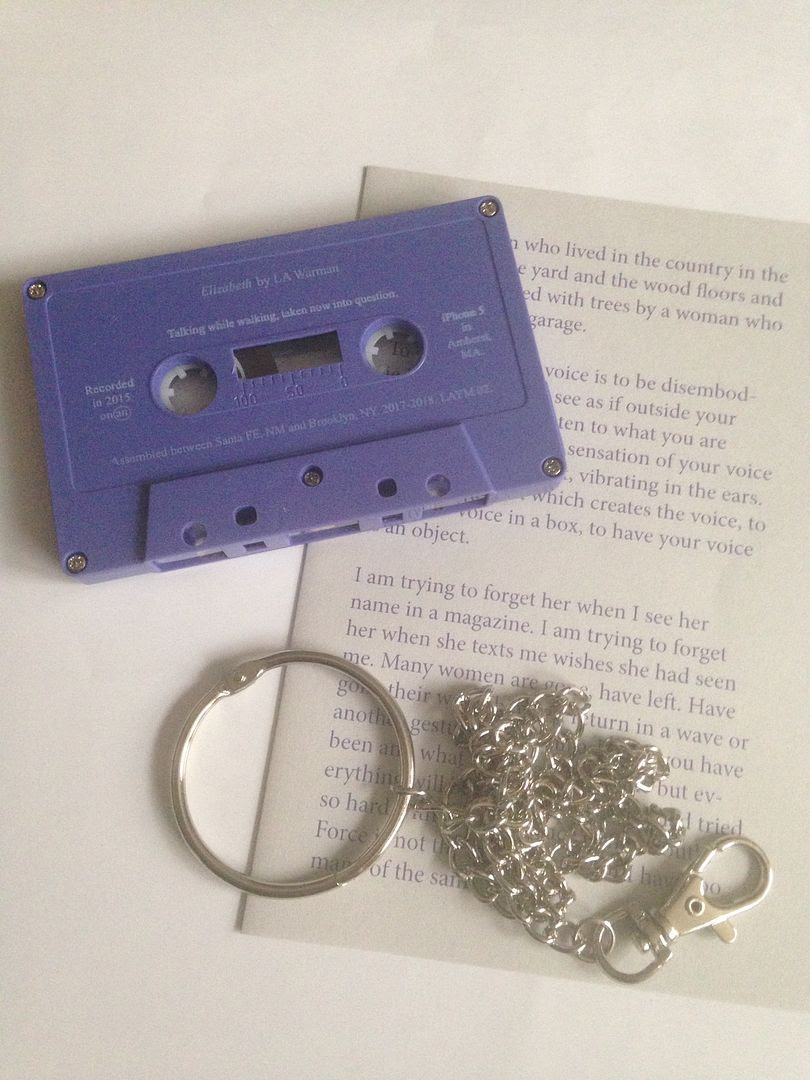 Perhaps the first thing you should know about this cassette is that Looking at your mint publishes non-musical audio.   This is an improvised talk about the internet and throughout it you will hear other sounds besides the artist speaking.   There are these background noises- at one point it sounds like a musician on the sidewalk is performing and at another time on the flip side there is a man and a woman having a fight, which the artist pays note of, while there are a few times when the GPS speaks on accident.

Pauses occur within the talk, so it's not just this sort of straight forward lecture about the subject and at the same time it feels like the artist's mind can wander onto other topics and things which just seem to be happening in the surroundings.   In some sense, this feels like a field recording and in another sense it has that spoken word aspect to it, so overall it just has both of elements combined.    It makes for something interesting, unique and worth listening to more than once to draw from the key points to reflect on and decide whether you agree with them or not.

The strongest point of the internet on this cassette is that it exists, which seems obvious to say but in that respect it stands true that no matter how much people want to spend less time on the internet or go back to the way things were before the internet, we, as a society, simply cannot.    The artist is clear on wanting to avoid cliches but I can use the cliche myself to say that we've already opened that can of worms (which is the internet) and now there is no going back.

Consider the internet in this sense though, and only because of one of my most recent experiences with it.    I was recently at a store and saw an item there for $19 and change but closer to $20.    I thought about purchasing it, but then ended up passing at the time.   A few days later, while at home, I thought about it and decided maybe I really did want it.  I went to the internet (eBay to be precise) and found it on there for $3 cheaper than what I would have paid in that store.   We can do just about anything on the internet these days and that's just one of the ways it is superior to going outside and buying things.

A point which really stuck with me about the internet as well is that it can be stopped, in the sense that you can log off.   The comparison is used that if you are walking down the street you must keep walking and cannot stop in a similar manner.   I do think that is beneficial as well.  If I'm in the middle of something on my laptop it's easy for me to put a pause on it (just shut my laptop) and then eat food or shower-- whatever I need to do-- but if I'm out, say, at a shopping plaza, a mall perhaps, and I feel hungry I cannot just magically be back at home and make myself food.

Though this cassette has no case, it does have text printed on its shell.   It comes with a wallet keychain for some reason as well as printed linear notes, which is a nice touch.   It's one of the most unique ways a cassette has been released from what I've seen and I think that is also something which rings true, strongly, because of the nature of what is on the cassette itself as well.   The cassette concludes with the artist meeting up with Elizabeth- which it feels was the plan all along- and so Elizabeth seems to be less the subject of this cassette as the destination but life is about the journey is it not. 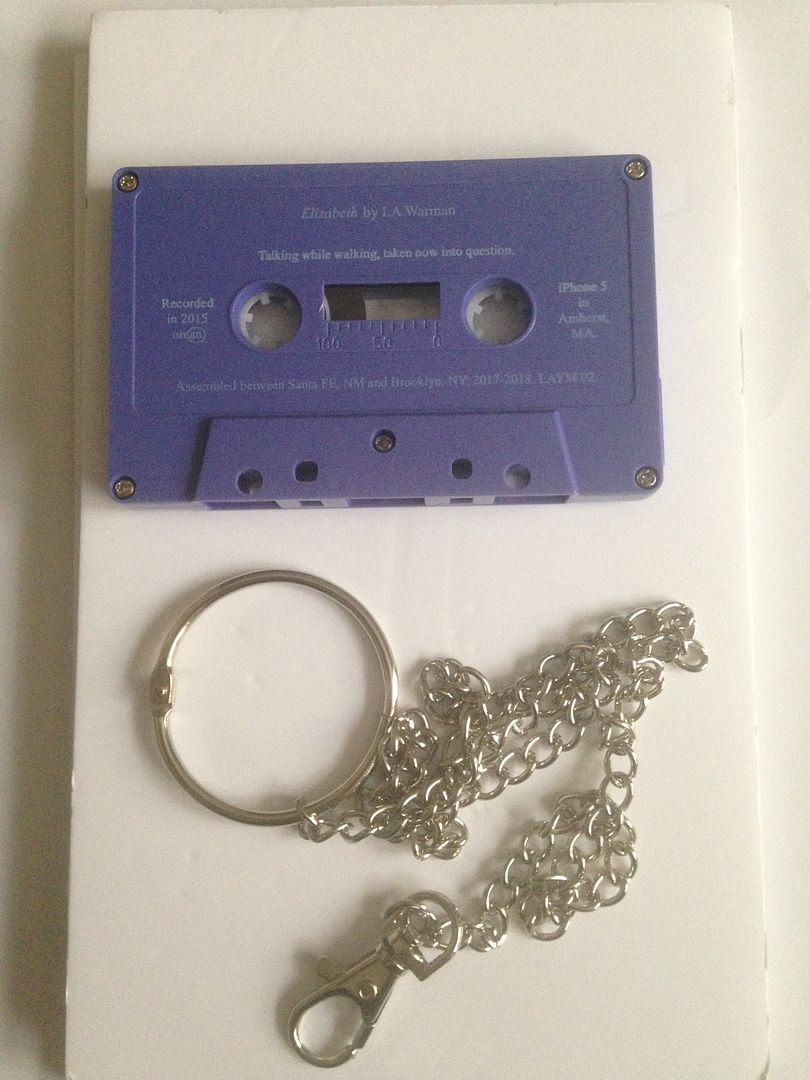 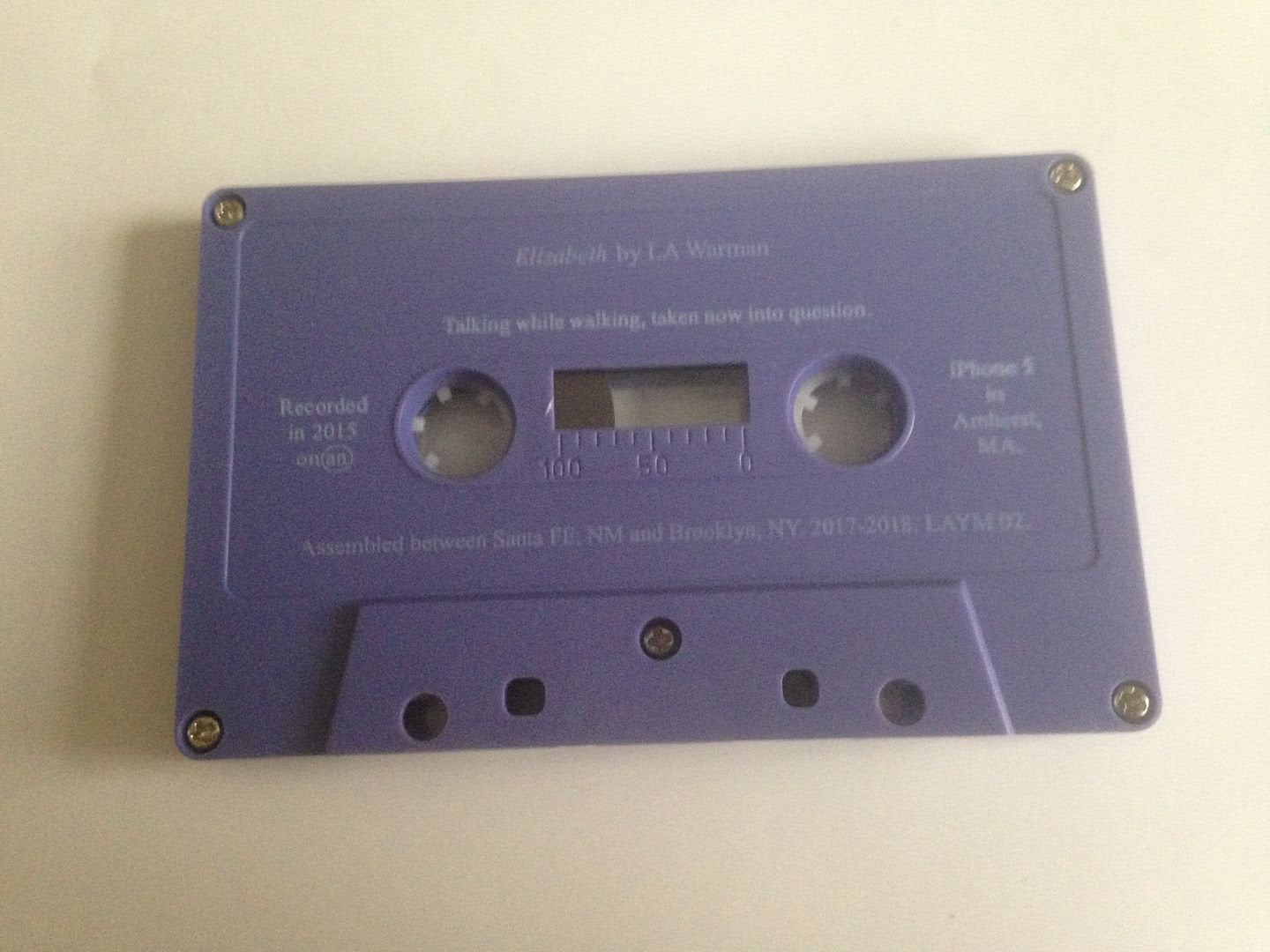 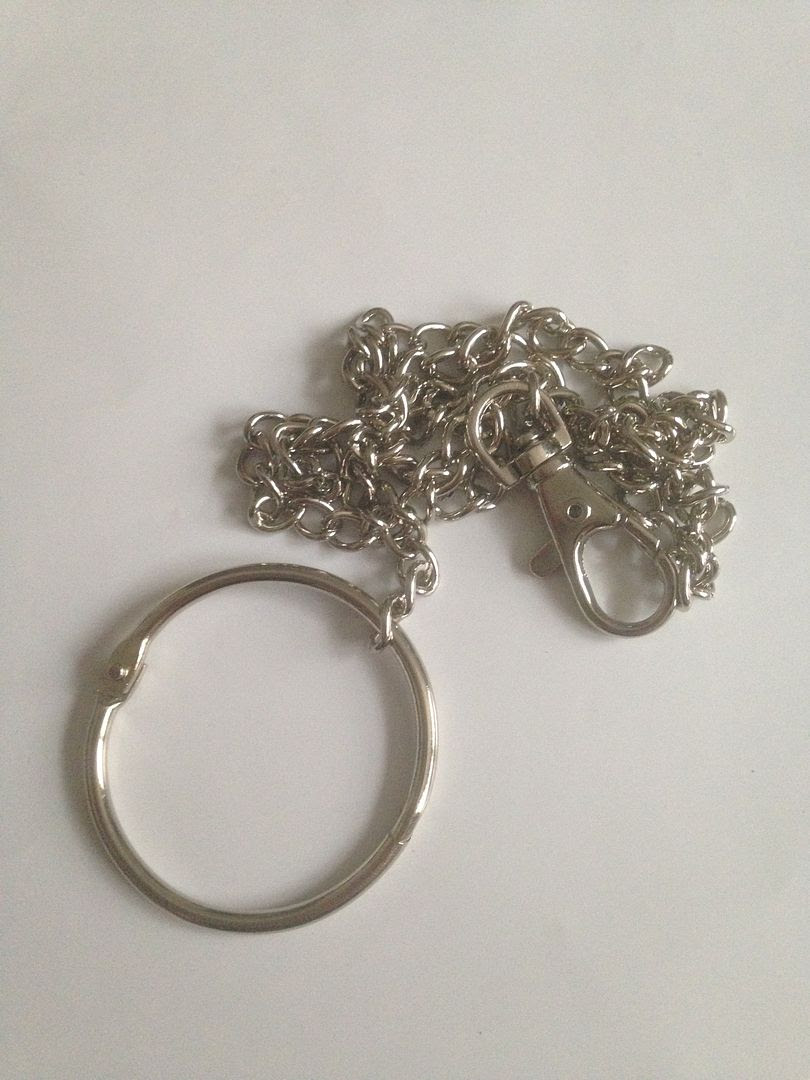 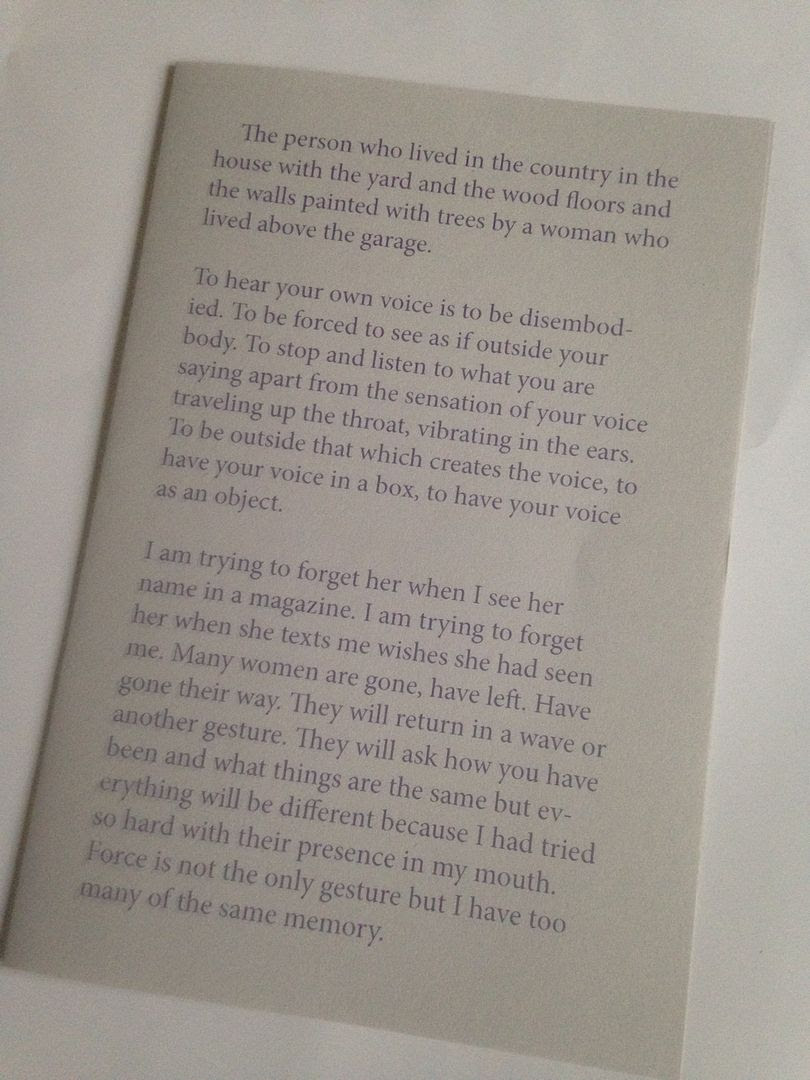 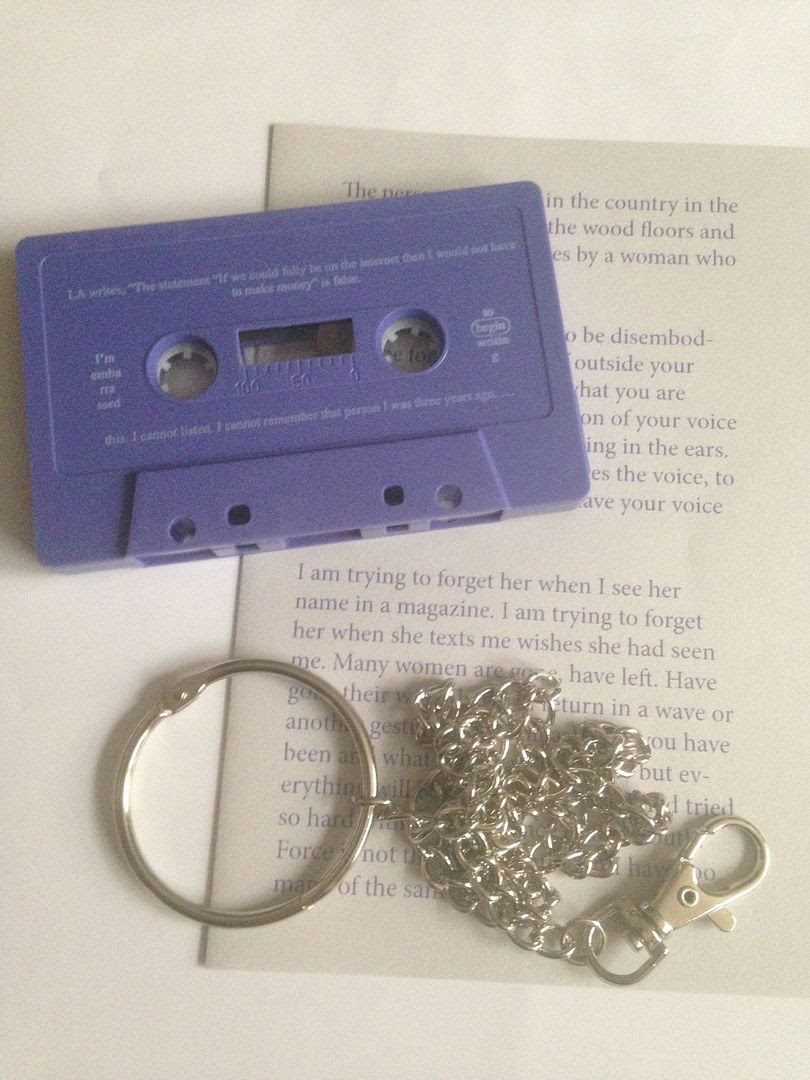 Posted by Joshua Macala at 9:05 AM