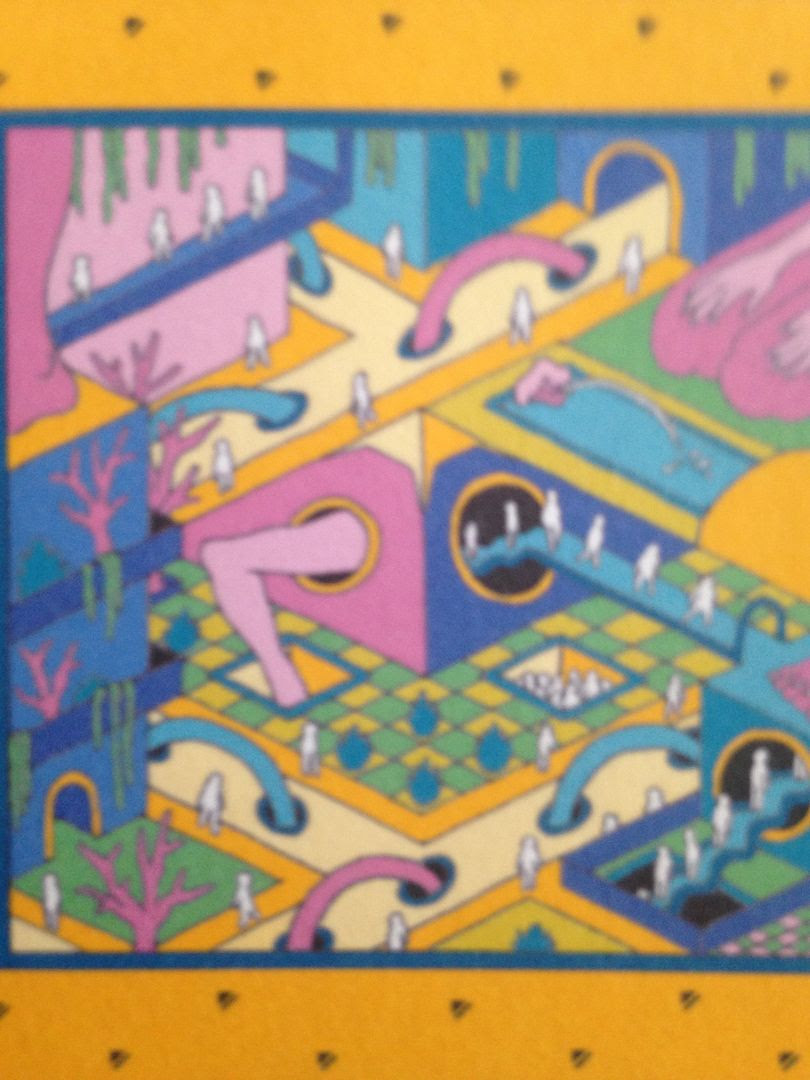 This is the third Comfort Food cassette on Already Dead and it is also my third review of a Comfort Food cassette on Already Dead.   I know I've written before about how all food could really be comforting in some way, so let's get into the heart of the matter, shall we?   This cassette begins with words spoken in darkness and then there is this singing which kind of forms words but not really and you just have to hear this first song to feel the Primus/tribal type of vibe where some of the sounds are words but they aren't really lyrics.

The second track reminds me of a mix of At-the-Drive-In and Rush while having a trumpet in it as well.   "Dollar Legs" has talking in the background as audio clips come through of what appears to be reporters interviewing people after some big disaster.   This song also has Darko The Super spitting words over all of the mayhem and darkness.   It reminds me of Us3 somehow (Remember them?) but also by the end of the song I feel like it grows a bit trippy, yet has those qualities similar to that of the Kill Bill soundtrack.

On the flip side we begin with some sort of horns and screeches which feel haunted, like a pained animal dying.  Bass notes or possibly guitar notes come through and this just has this building feel to it, like it's growing into something massive yet terrifying.    There is singing which ultimately just makes this that much more intense and it goes from this horror movie vibe to psychedelic freak out real quick.  I am these guitar notes being played while the guitarist is lying on the floor.

The drumming continues through this hanging bass and the guitar twangs on through as well.   It is also worth noting that Comfort Food is a duo but they play music which makes them sound like a ten or twelve piece band.    There is an ad for Vitamin B1 and I agree that food is important but so is being happy.   I always struggle with the idea of, say, soda for example.  I know soda is bad for me (so terribly bad for me) but sometimes I just crave Mountain Dew so I'll drink it anyway.  I used to drink almost a liter of Mountain Dew a day in my younger years though, so once in a while now is okay with me I suppose.  I also believe this song has a harmonica in it.

As the singing kicks in, this song reminds me of something between Beck and those Blind Melon "Tones of Home" only also not, which is just how you have to expect Comfort Food to sound-- like others but not like others.    The horns come blaring through like jazz and if there was some kind of music that you could loosely describe as being a mix of experimental rock with jazz then Comfort Food would be right up there among the best of them.   It's just so odd that at times I'm thinking this is like Frank Zappa and then at others I hear free jazz.

At times it can feel like these words are in a different language (not even saying "not English", but just something not from this planet) but I think that is also an accurate way to describe this music overall.   It's taking those ideas of rock and jazz and noise and putting them together in a way that isn't like anything of this world.   If you do not want to listen to Comfort Food because you haven't been impressed with them in the past for whatever reason, this could be your best chance to jump aboard the Comfort Food bandwagon as this is one of my favorite cassettes, in general, to date. 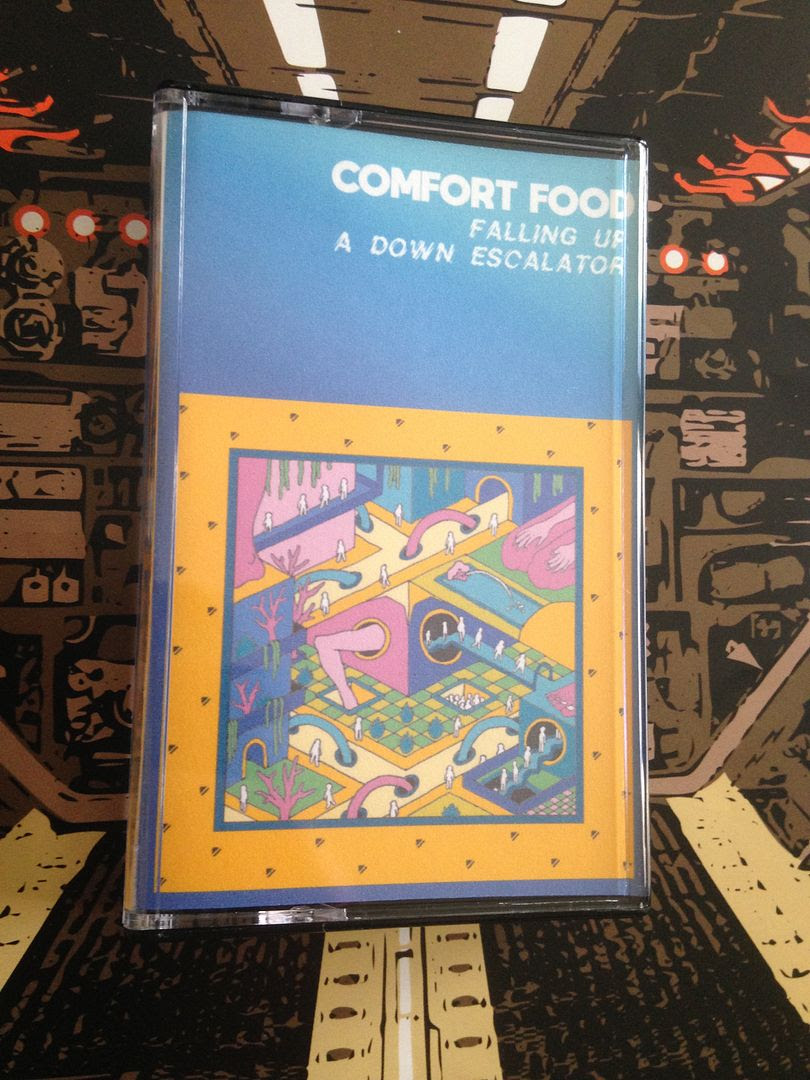 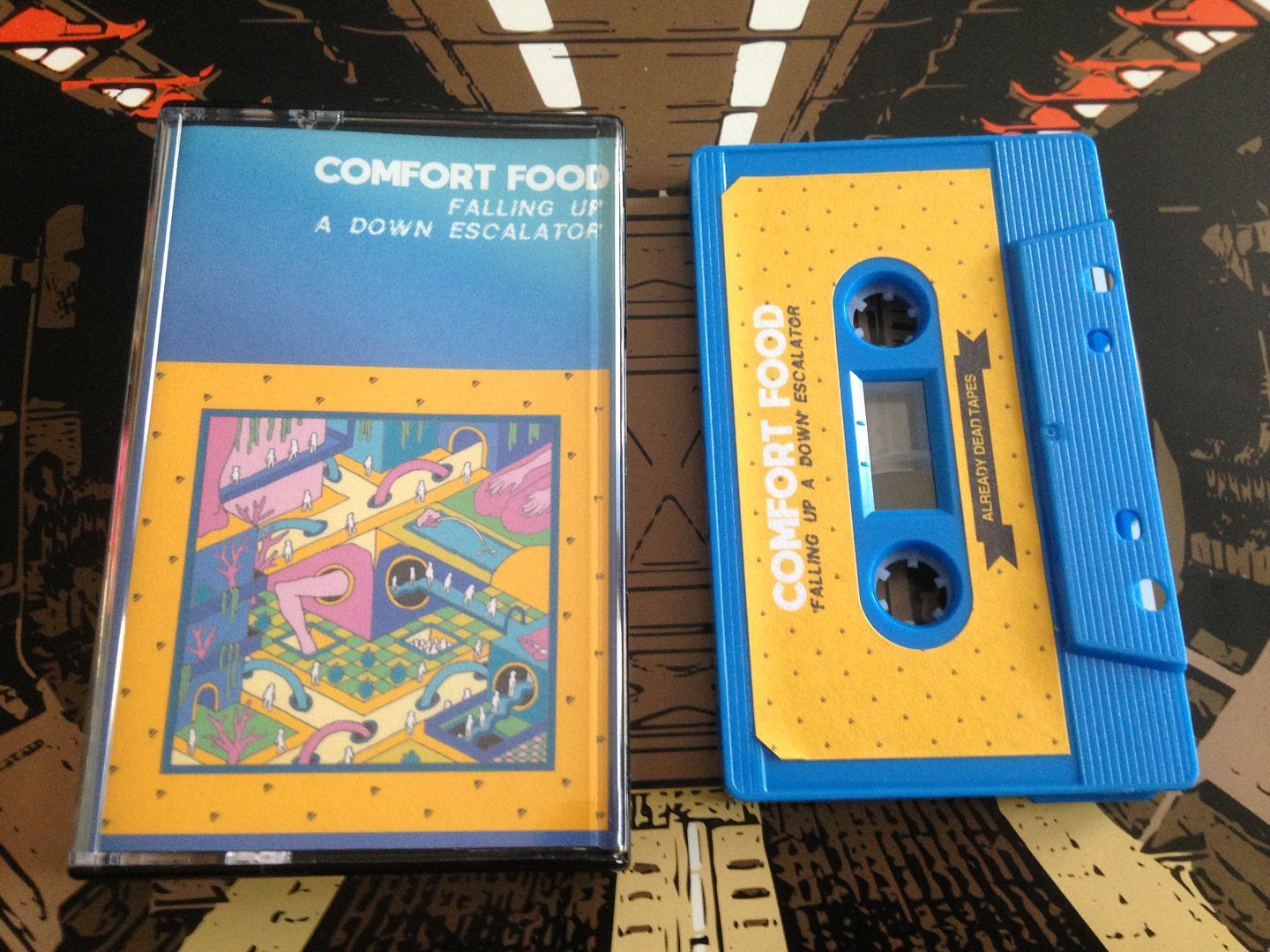 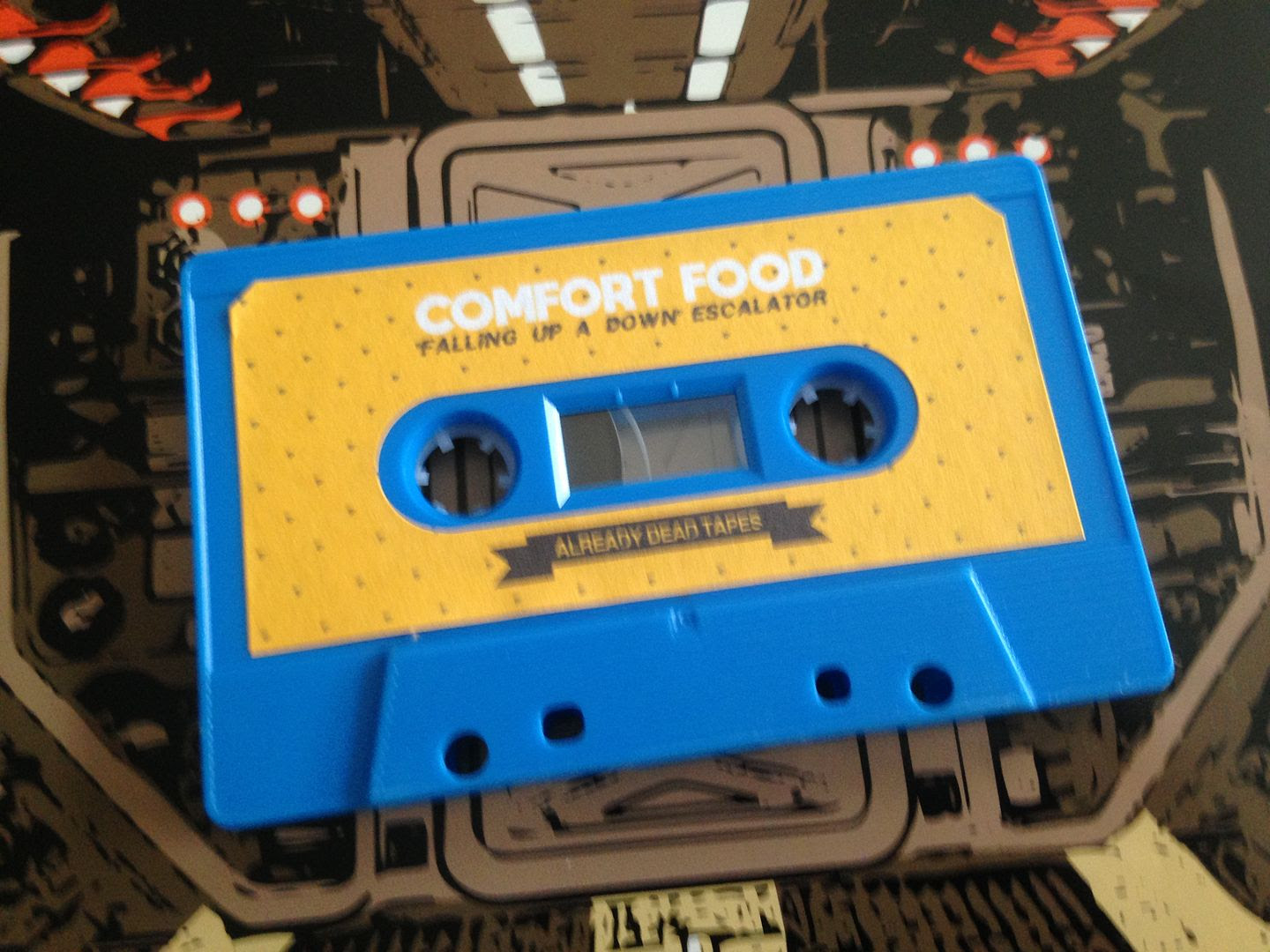 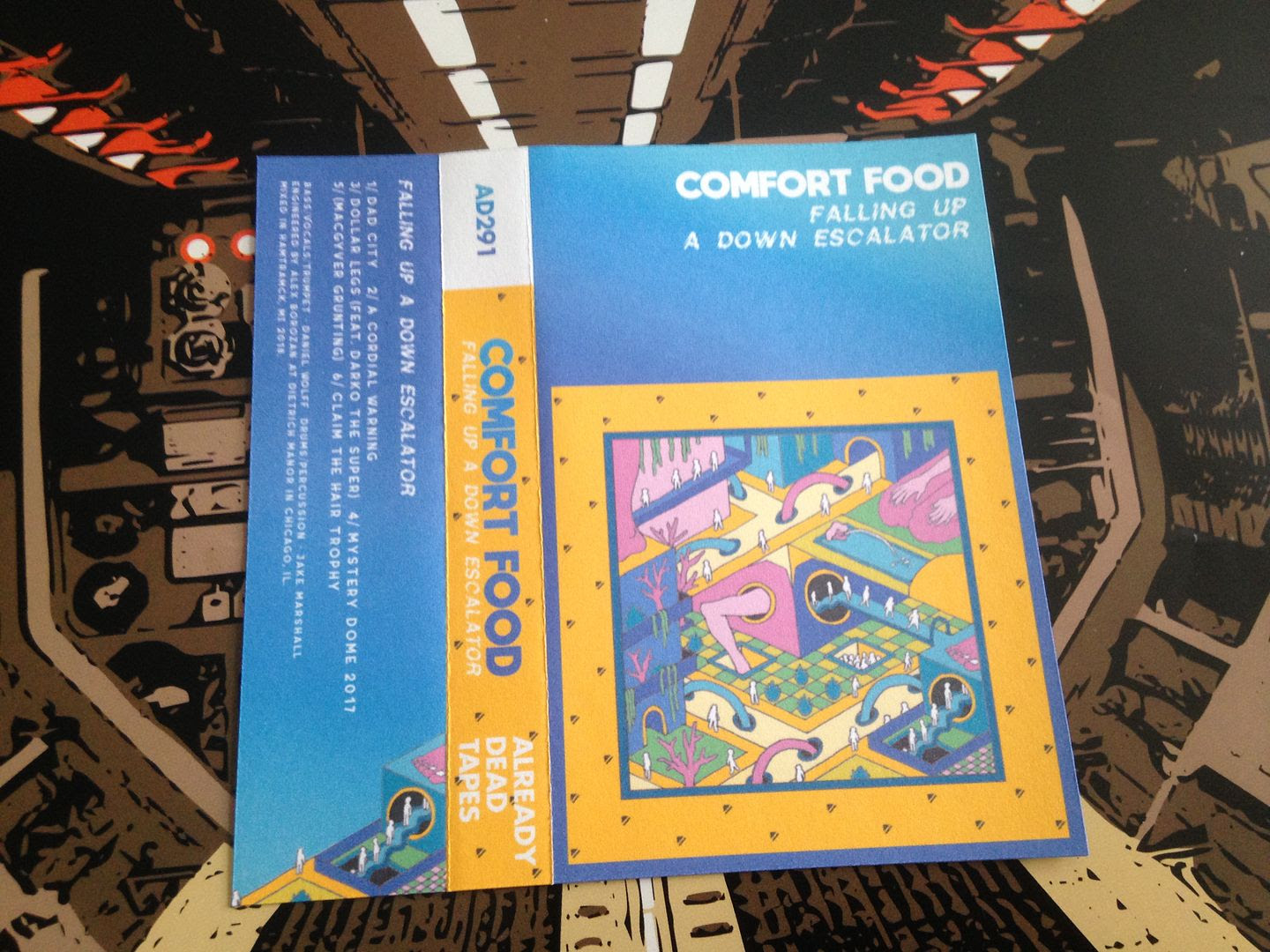 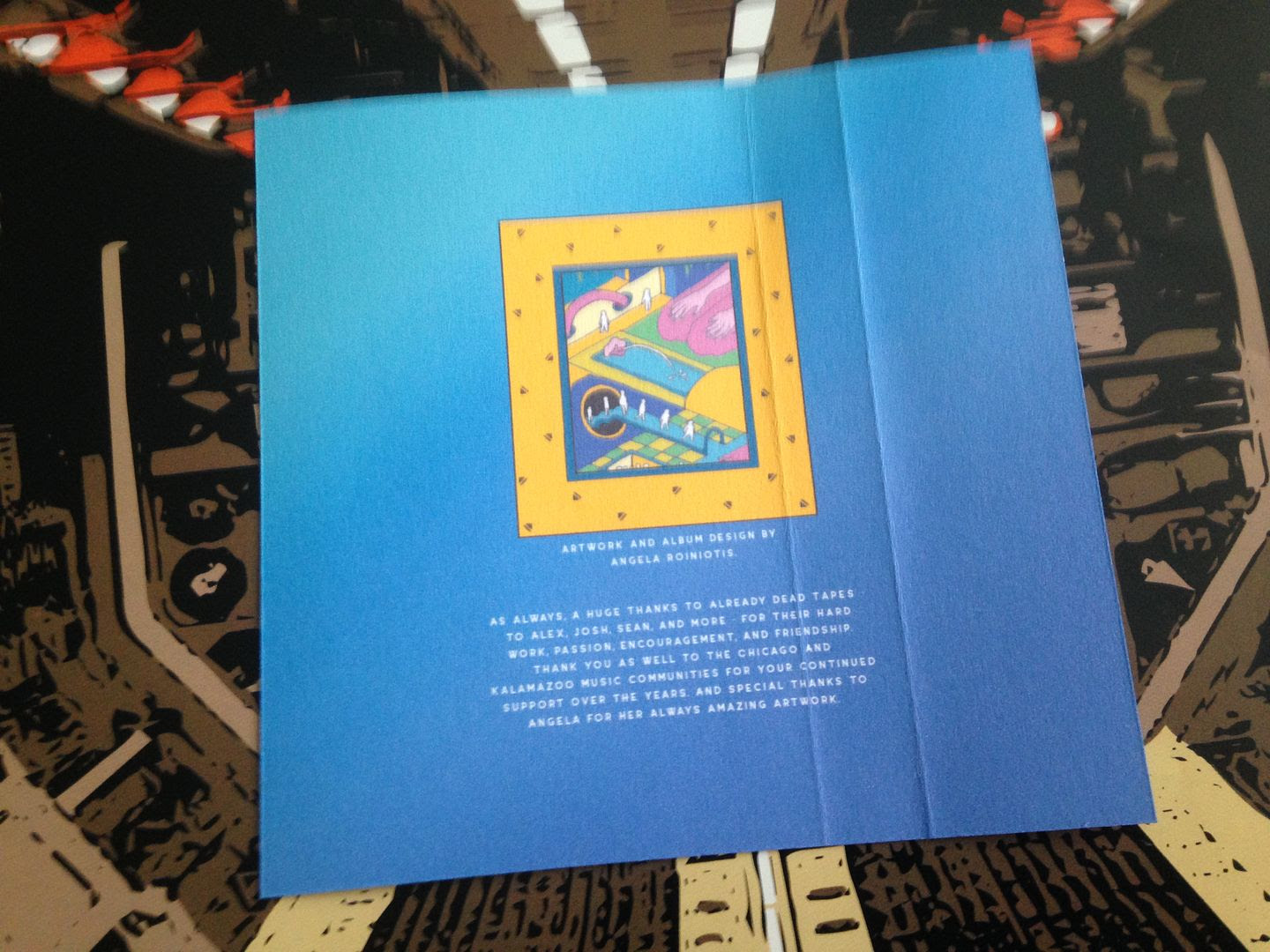 Posted by Joshua Macala at 2:20 PM