(Editor's Note: This Undertaker action figure was originally reviewed under the impression it was from Series 63.   This is because while we were out we opened it up and threw away the packaging.  When we got home and I looked it up on RSC the only similar figure I saw was Series 63, though it doesn't have the same head scan obviously.   RSC didn't have the Series 58 Undertaker available any more which is why I overlooked him when planning the review.  On one hand, this is okay because it means we haven't found the Baron Corbin series in stores yet (and skipped Becky Lynch), but on the other hand it makes me feel a bit foolish.  Whatever.   Life goes on)


When we found this Undertaker figure at Walmart I assumed he was part of either the Sasha Banks series or maybe even the Kalisto/Renee Young series since they still had some of them there.   It wasn't until after we got home I realized he was part of the same series as Baron Corbin and it managed to somehow jump over the Becky Lynch series then as well.    I'm hoping we can still find B62 in stores and more of B63, though right now Baron Corbin is at the point that if I see him in stores as a Basic I'll buy him but if not I'll wait for an Elite version of him.

The main selling point for this Undertaker figure for us was that he came with the bonus gold championship belt.   I asked Quentin if he wanted The Undertaker because he came with it and Quentin said yes.   We have only ever seen one other figure in stores with this title before and it was a Fandango and the title had been stolen from the package.   So, yes, this was our first chance at getting this gold belt and so we seized the opportunity because Quentin always seems to be fond of championship belts.

In the car, after we opened up Undertaker, Quentin said he wanted this gold belt to be the WWE Demon Championship and Finn Balor and Kane were going to fight over it.  I mean, I understand that he's four and he's my kid but someone in WWE should really consult him about his booking ideas because it can't be any worse than what's going on with Kane right now anyway, right?

I really became a fan of this Undertaker figure the minute I opened it.   We only have one other Undertaker figure and he's in his tights/tank top and came with the jacket/hat deal and he also has the mohawk and head that doesn't sit quite right on his neck.   This Undertaker looks like someone you wouldn't want to meet in a bar fight.   His legs are heavy (which sometimes makes it hard for him to stand because of the small shoes they gave him) but he just feels like someone I would put in hardcore matches and he'd really mess you up.

We were at a Walmart in Bristol when we found this Undertaker and then we went to Target in Southington afterwards and found the Dean Ambrose/Roman Reigns Summerslam Battle Pack.   So these three figures kind of go together based on that and as such I've been making this Undertaker chokeslam Dean Ambrose off of high places and onto things.    I realize he probably had this look when he fought Brock Lesnar, as I believe it to be his return look from after losing to Lesnar at Wrestlemania (When 'Taker kept hitting Lesnar with low blows) but he just seems like a death match wrestler to me for some reason and I love it.

I'm not sure we'll buy another Undertaker figure but the two we have are fitting our collection just fine right now.   At Target they also had the single carded Undertaker from the Summerslam series marked down to $6 and change (as is) but nothing seemed to be wrong with him and yet we passed on that figure, so yeah, unless it's one of these special situations I don't think we'll be adding any more Undertakers to our collection any time soon, though Savers grab bags are always an option. 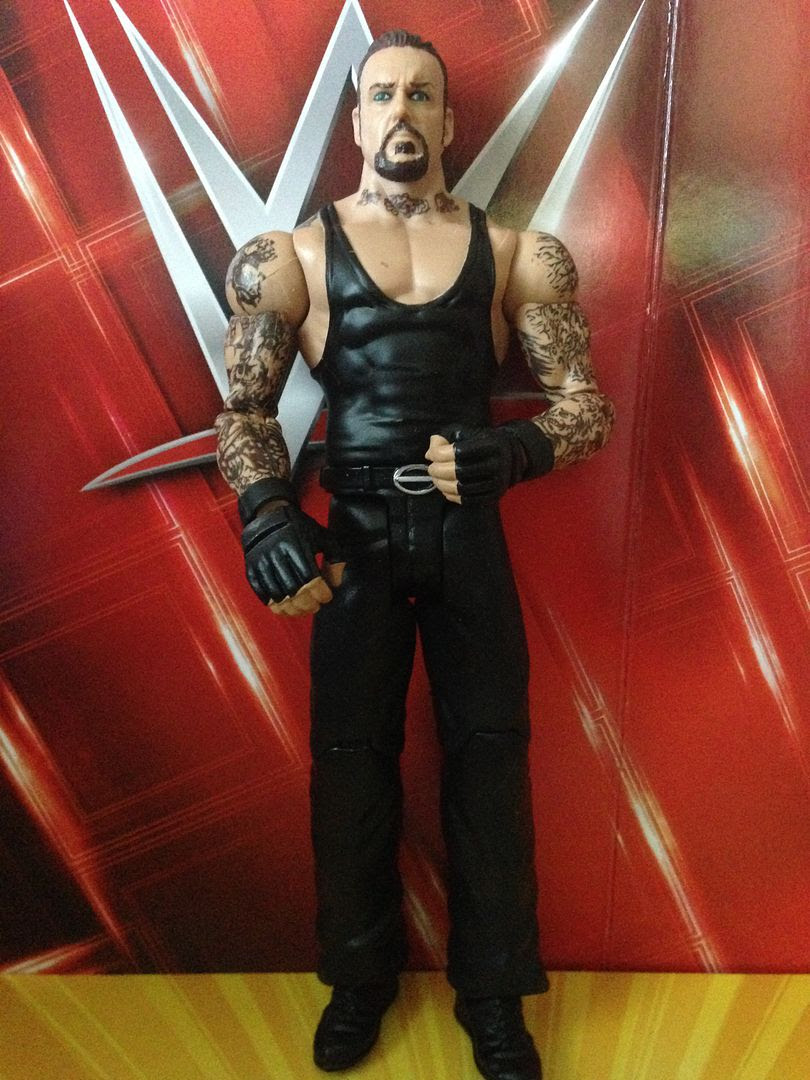 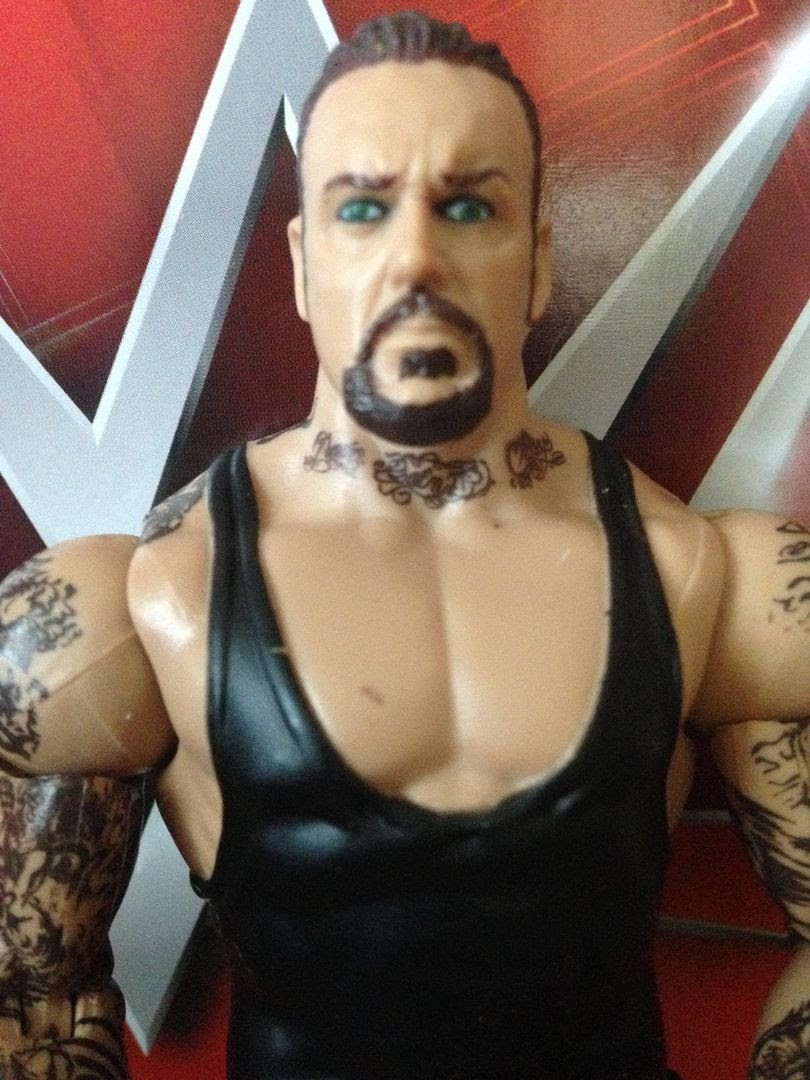 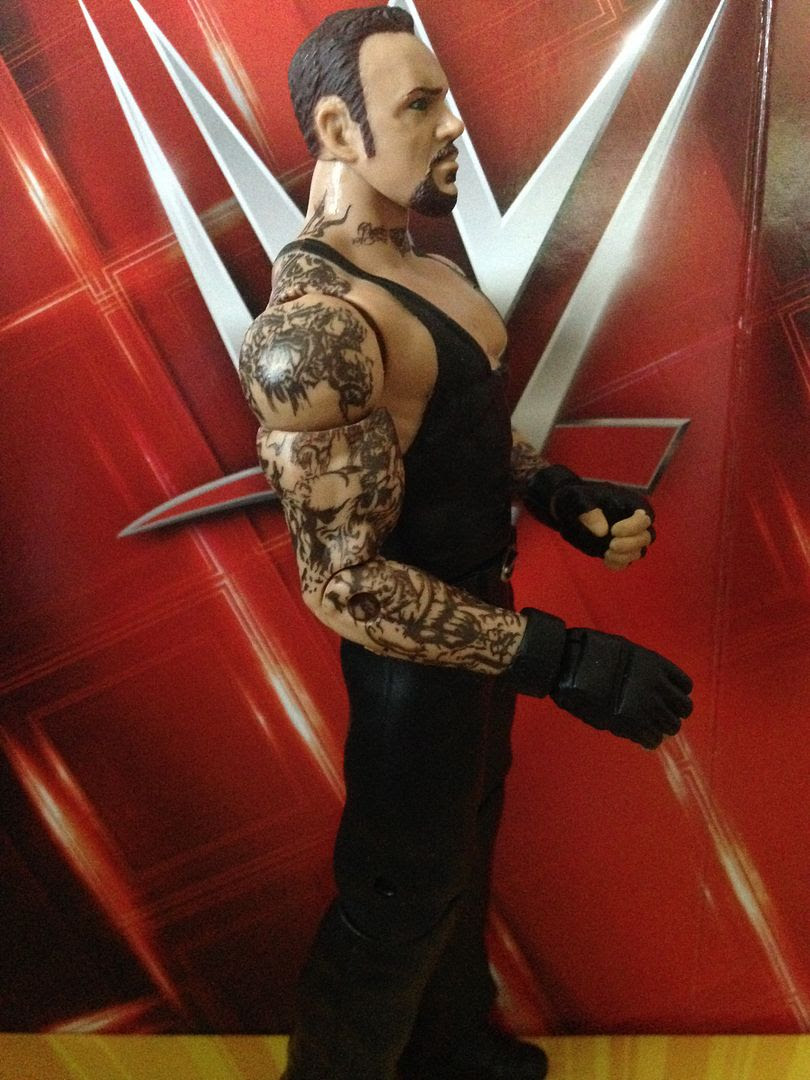 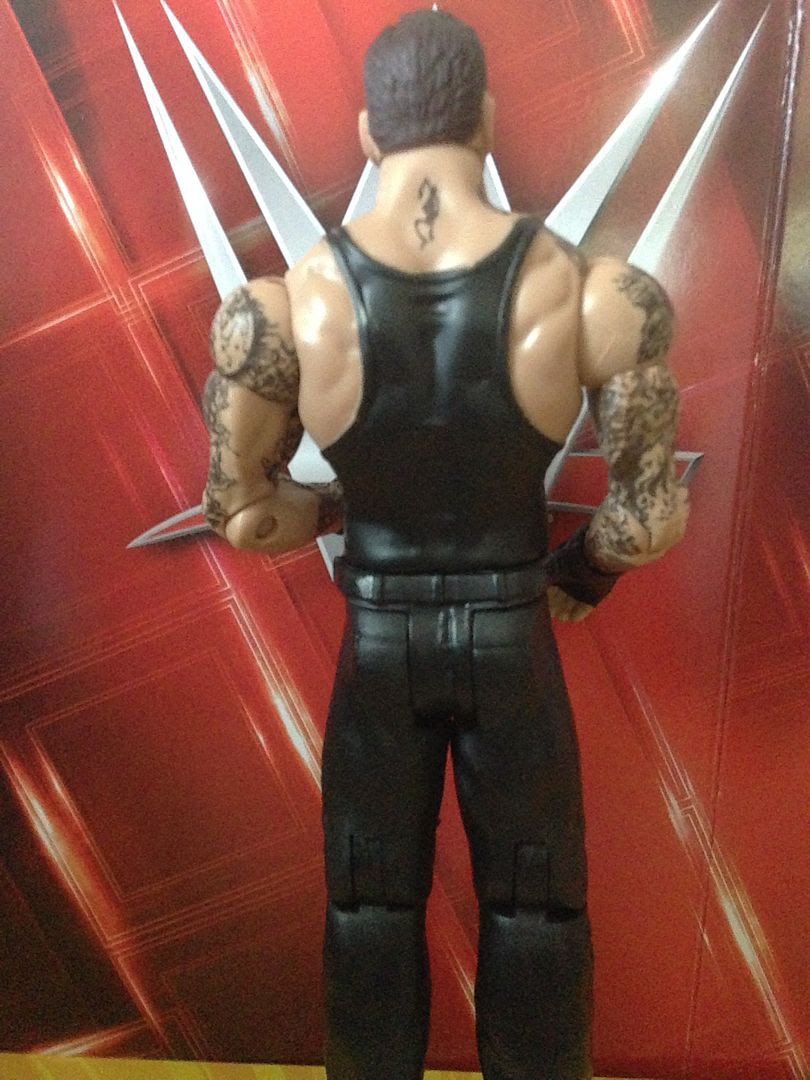 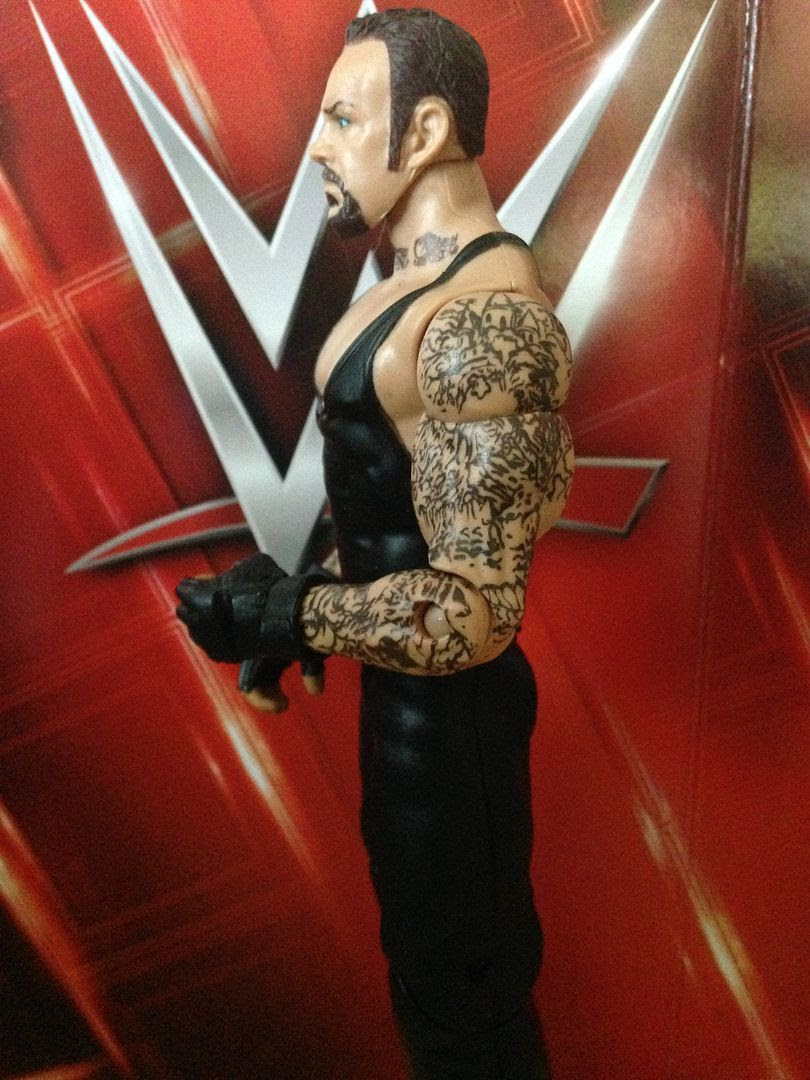 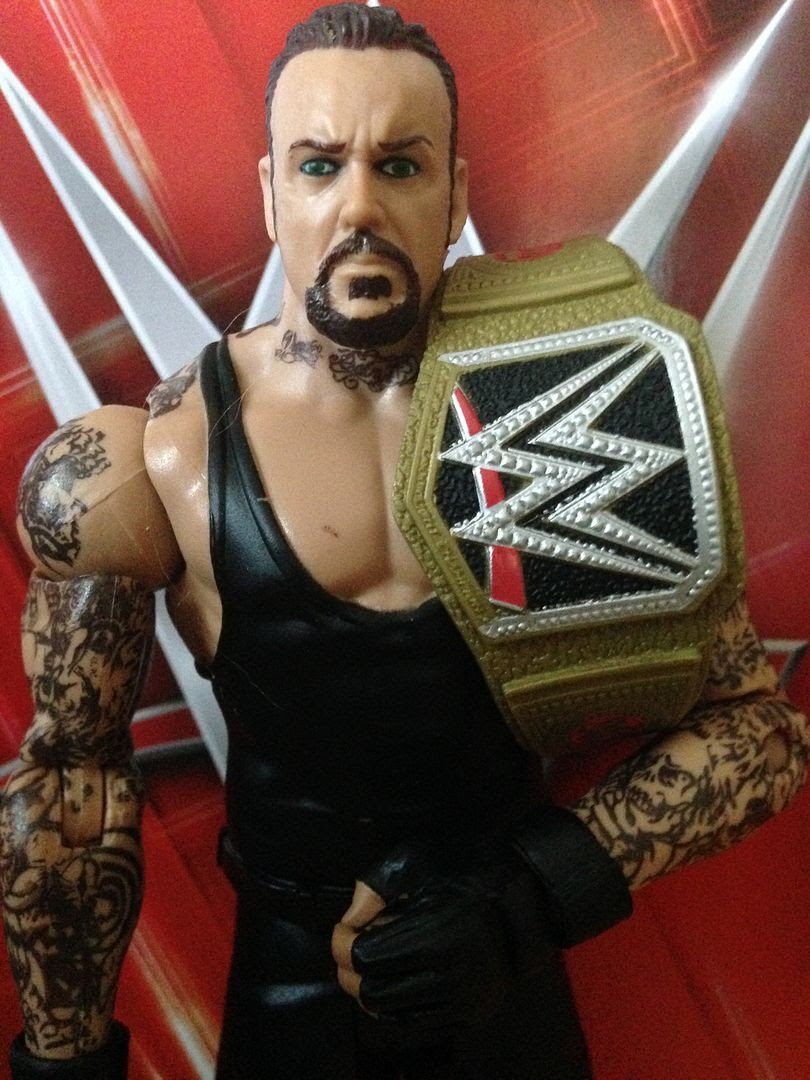 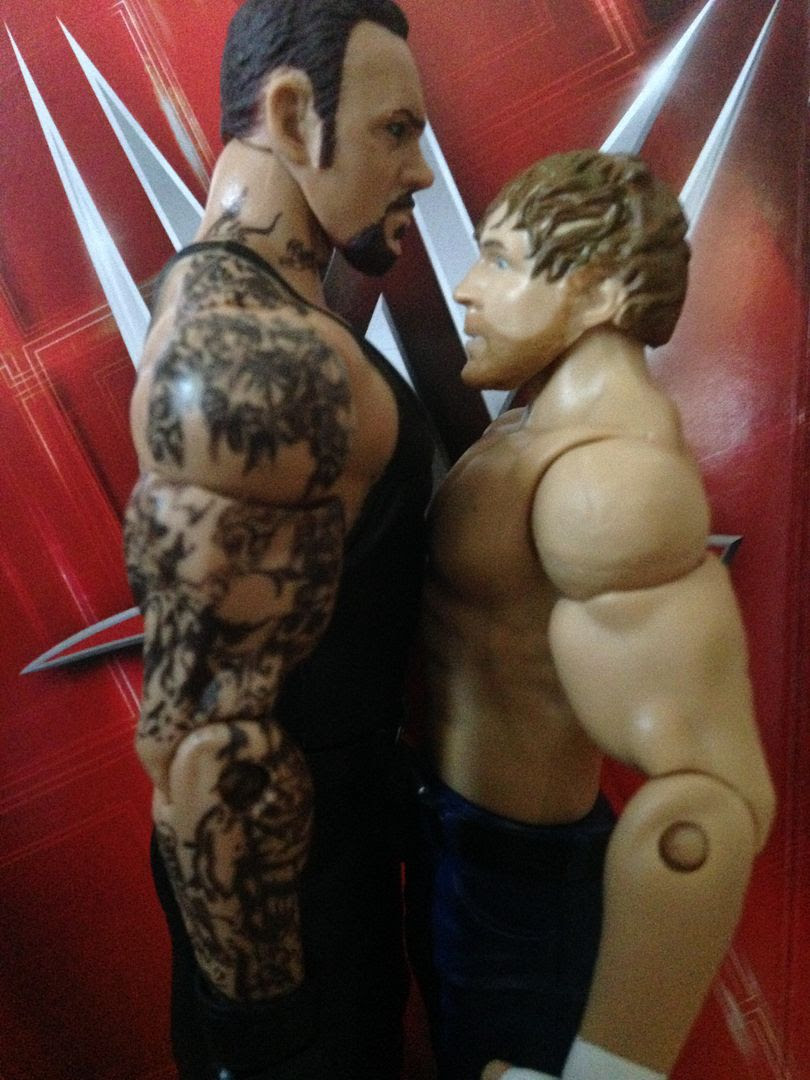 Posted by Joshua Macala at 8:08 AM