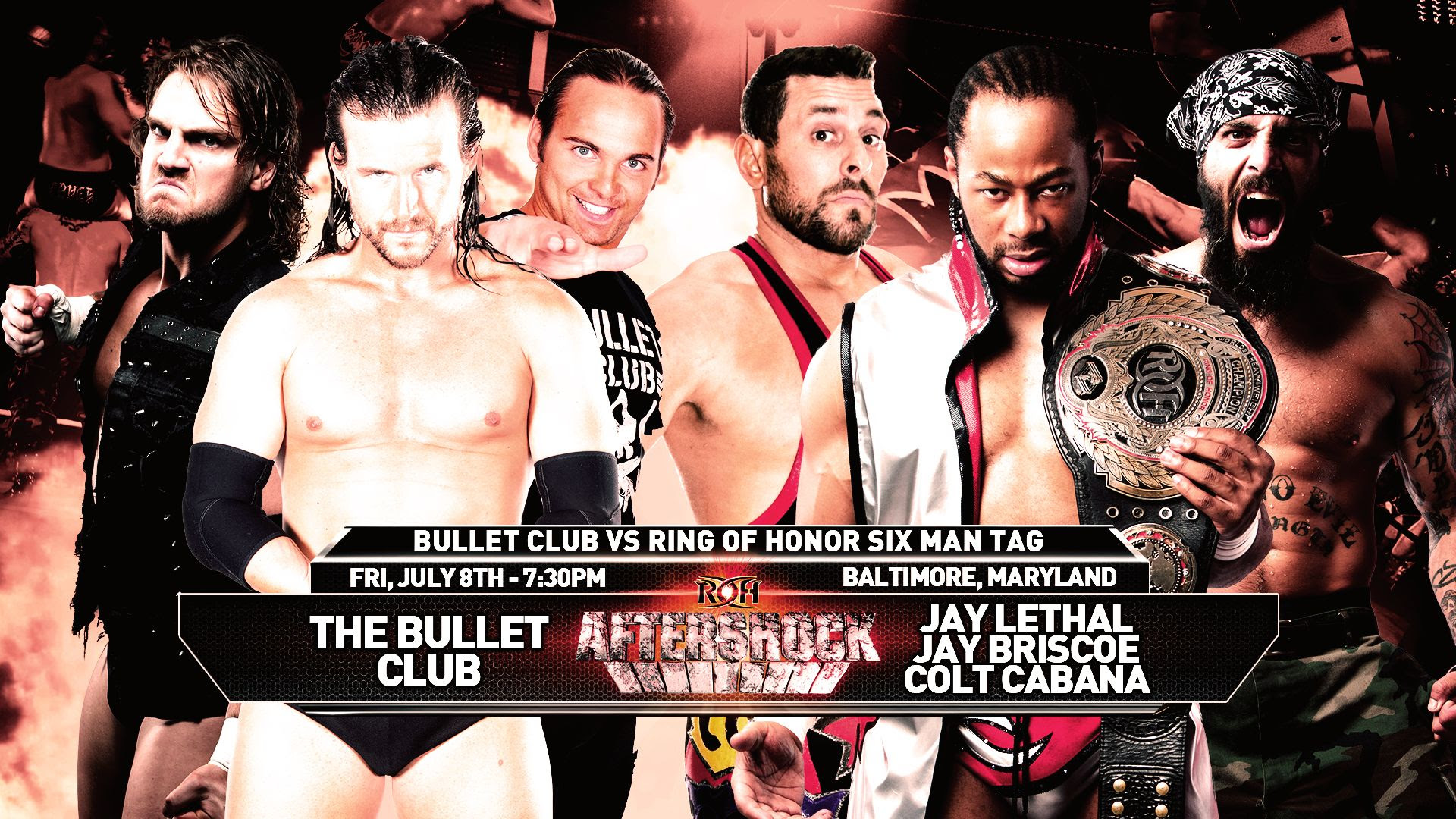 This wasn't quite a PPV and it wasn't quite an episode of ROH TV, but I'd say it was somewhere in between as the ROH TV episodes are typically around an hour, PPVs around three hours and this show was around two hours.   Still, it was fun to see in some ways, even if it meant listening to Matt Taven on commentary talking about how he's in the new "Ghostbusters" movie (which according to iMDB he is not) and Kevin Kelly complaining about how that movie should have never been made because, hey, why be a fan of something, right?  Not liking the new Ghostbusters because it's not the original guys is like not liking ROH because it's not under the guidance of Gabe any more, in which case you wouldn't have a job, Kevin Kelly!

The opening match saw War Machine defeat two sort of jobbers and it was pretty much a squash match.    It is very possible we will see Leo St. Giovanni & Shaheem Ali again but let's face it-- War Machine needed this win to get them back into seeming like a threat again.   I don't know.   I'm still not sold on War Machine as a tag team, but here is ROH's chance to once again try and sell me on them.

Jay White defeated Lio Rush in what could be considered the match of the night.   This was a tricky match because ROH just brought in Jay White and Lio Rush was the TPT winner and so it was strange to see these two fight to a clean decision with Jay White winning.   It kind of feels like ROH wanted Jay White to be their TPT winner but couldn't sign a deal with him at the time and so now Lio Rush is taking a backseat to him (after losing his title shot as well, it just seems like Lio Rush is fading out in ROH)   I just hope WWE doesn't give similar treatment to whoever wins their CWC in favor of Will Ospreay since Opsreay signed with EVOLVE and that can easily put him into NXT as we've already seen.   The best part of this match was Matt Taven making fun of Lio Rush.

The All-Night Express defeated Cheeseburger and Will Ferrara.   I guess since Jushin Liger is back to Japan Cheeseburger had to find a new tag team partner, but I do like the team of him and Ferrara.   What I don't like is the ANX and how they want to "Make Wrestling Great Again".    Perhaps they should really push the envelope and say they want to "Make ROH Great Again" and discuss how it was better under the leadership of Gabe and how most of the top guys from that era have since left for other promotions because of the way the booking is now.  I mean, I don't mind ROH- I can take it or leave it- but it just feels like their talent does so much better outside of ROH itself and that speaks volumes about ROH as a company.   I'm not just talking about Samoa Joe in NXT vs. Samoa Joe in ROH, but I'd rather watch the Briscoes in New Japan or see Silas Young in AAW than see them in ROH which feels a lot like their home.   It's a strange situation indeed.

In the next match Bobby Fish defeated Kamaitachi without the ROH TV Title on the line.   There were quite a few racial comments from Bobby Fish before the match started and it caught me off guard.   Since Kamaitachi joined up with The Addiction he turned heel so why is it that Bobby Fish is using the cheap racist jokes to... I don't know... It didn't feel like he was trying to get cheap heat as much as he was trying to get a laugh but this is the type of thing we might have seen in the 1980's in professional wrestling but in 2016 there is no place for this blatant racism and it has made me look at Bobby Fish in a new light, which is not a good thing.    For those who may have missed it, the commentary table told Bobby Fish that Kamaitachi was likely not going to shake his hand so Fish asked if he should bow, which is all right for a Japanese custom and all.   Then Bobby Fish- out of nowhere- asks if he should throw a calculator or math problem at him because, you know, all Asian people are good at math.   Fish then struggles to remember the game of checkers they invented, thinking of Chinese Checkers before Kevin Kelly has to clarify that Kamaitachi is Japanese and not Chinese, but hey, "Racist" Bobby Fish doesn't care.    This wasn't even "It's a joke dude, lighten up" as much as it was straight up cringeworthy.

Joey Daddiego (aka J Diesel) defeated Chase Brown next.   Chase Brown is an interesting character as his nickname is apparently "Cauliflower" and his theme music (which they said he composed himself) says things to that extent and he even came to the ring carrying a head of cauliflower.   Yes, he looked like a hobo/clown and it was all just too surreal after the previous match as well, so I move along and hope that we don't see an eventual Cauliflower-Cheeseburger pairing, which seems inevitable now that I type it.

Donovan Dijak (ugh), Chris Sabin and Kazarian all lost in a four corners survival match to Mark Briscoe.   This makes sense because Mark Briscoe is in line for an ROH TV Title shot against Bobby Fish, so him picking up the win here over other halves of tag teams and Dijak just makes sense.   It was a fun match though.   Chris Sabin should be ROH Champion one day.

The next match was interesting because according to Cage Match dot net, this ROH show was on July 8th and RevPro had their Summer Sizzler event on July 10th- just two days later.   Here we saw Christopher Daniels defeat Moose (which came about after the previous match) with his feet on the ropes much like Sha Samuels would do two nights like in RevPro.   Hmm.   Interesting booking for Moose, who must be thinking "WTF they doing to me?"   Oh well.   He's in TNA now, so there's that.

Silas Young somehow defeated ACH in a Last Man Standing match (he cheated!) but hopefully this is really the last of this feud now and both of these two men can move on.

Where is Dalton Castle??

Posted by Joshua Macala at 7:59 AM