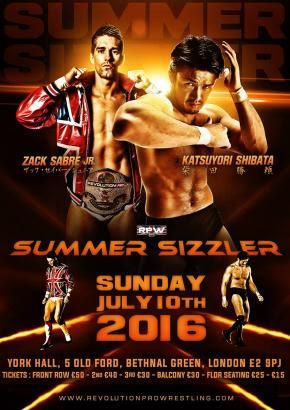 You know you're getting in good with a promotion when you don't check the match list for the cards any more.    EVOLVE is one of the first promotions I did this for and now with both PROGRESS and RevPro I don't check the cards before watching them to see what matches are featured (and most importantly to gauge a level of my interest)   I just put on RevPro's Summer Sizzler because I knew since it was coming from RevPro it would be a great event even if I didn't recognize everyone on the card.

The show opened with a four way match for the tag titles, which were successfully defended by Charlie Garrett and Joel Redman.  I actually really liked watching Jody Fleisch in this match- who I remember being in ROH ages ago- and of course Jonny Storm.   The British Young Bloods were just all right and I think that The Legion Of Lords has potential despite my just plain not being a fan of Gideon Grey.   Still, the British wrestling scene seems to have a better tag team division than most places, even though I'd still like to see some of the top teams from Mexico and Japan (And other countries) come together to fight in WWE in the CWC style only, you know, for tag teams.

In the second match of the night Tomohiro Ishii defeated Josh Bodom.  I like Josh Bodom a bit but he was just in way over his head with Ishii here.    My mind set during this match was along the lines of thinking about whether or not Ishii could be made in the Ring Of Honor action figure line because a) FTC is creating a Future Stars type line with members of the NJPW roster in it and b) He was the ROH TV Champion for a little while, so wouldn't that have kind of made him part of the ROH roster if only for a moment?  I would certainly buy a figure of Ishii, so let's hope for the best.

You can love Moose or you can hate Moose, but the fact is that no matter what promotion I'm watching and enjoying I tend to always see Moose on the card (which might diminish now that Moose is in TNA, but we'll see)  I just... I don't see Moose as being that top guy in ROH or even TNA because while he has good matches for a big guy he just can't carry himself the same way that someone such as, say, Davey Richards can.   It feels like Moose could get tired or just defeated by someone smaller but quicker and even if someone had more technical skills they seemingly could make Moose tap.   (Right now, in TNA, Lashley vs. Moose for the TNA Title, Moose taps no doubt)   He's a big, power guy but that's about it and that can only take you so far because the world of professional wrestling doesn't care as much about Goldberg right now.   Regardless, Moose lost this match to Sha Samuels (Who is not Samuel Shaw in reverse) as Samuels used the ropes for leverage to score the three count.   It was a nice finish because it gives the heel- Samuel- bragging rights while Moose doesn't really lose any of his value (assuming he was negotiating a new contract around this time) because he didn't lose cleanly if you watch the match.    Could it be that this was a Moose match I liked?   Strange times are coming for sure.


When you see Will Ospreay in a match against "The Bruiserweight" Pete Dunne you know you're in for a treat.   When it's for the RevPro British Cruiserweight Title you know it's going to be something special.    I was actually really engaged in this match because I was assuming since Will Ospreay is doing quite a bit in NJPW right now that this would be more of a "put over our champ" deal than anything else.   Ospreay had some near falls and so did Dunne, but I was rather shocked to see Will Ospreay win not because of it being an upset or anything but just because I thought his commitments to NJPW might prevent him from such things.    It was an excellent match, which is to be expected from these two, with a celebratory finish.

In the next match, Marty Scurll defeated "Speedball" Mike Bailey.   I remember seeing Bailey in CZW once and now it seems like he's always in these British promotions.   Mike Bailey is a fun character because he comes out like The Karate Kid and doesn't quite fully wear shoes.   Marty Scurll still got the better of him though, proving that Scurll can call himself "The Villain" all he wants but he's truly one of the best in the world today.    An obvious match to watch if you are a fan of Marty Scurll and, well, you should be.   If names like Marty Scurll, ZSJ and Will Ospreay don't have you investing your money in a promotion like RevPro then you need to decide whether or not you are a true fan of professional wrestling.

I wasn't as excited as I should have been to see Big Damo come out, but then when I saw his opponent was Matt Sydal I thought, "Great, here comes a squash match".   Seeing Damo not fight another big guy actually turned out to be a lot of fun.   Sydal got the win- which was interesting as well- and it was noted on commentary that a win here for Sydal could put him into the Heavyweight Title picture and so I hope that this does because I'm already excited for the notion of ZSJ vs. Matt Sydal.     After the match, the two shook hands as a sign of respect and when Big Damo took to the mic he was blindsided by Sha Samuels.    I'm not sure what it is about this whole situation, but I'm actually really looking forward to Sha Samuels vs. Big Damo and that is definitely a good thing.

You know Zack Sabre Jr and Shibata are going to be great in the main event.    I actually watched this match the same day that I watched the Shibata match from NJPW Dominion just because that was where I was with both events and all.   I'm not sure I have any other Michael Elgin or Kenny Omega matches lined up to go with my next Dominion match though.    Whenever the ref counts, the fans say the next number after that.   For this show though, the crowd was really into Moose.   So when the ref would count "1!" the crowd would respond "2! Moose!"   But when ZSJ was nearly counted out and the ref reached a nine count, the crowd instead forgot about Moose and went into a series of "10! 10! 10! 10!" ala Tye Dillinger.   That was a funny part of this match but otherwise, yes, these two put on a clinic and having ZSJ and Will Ospreay as champions in your promotion is never a bad thing.  The next RevPro PPV event is Will Ospreay vs. Vader and that is just going to be so much fun.   Ahhhhh!!!  I love RevPro so much right now.
Posted by Joshua Macala at 5:54 AM