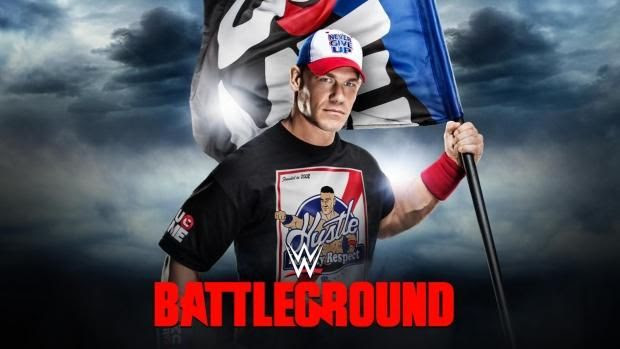 We actually had a decent amount of time to build up from the last PPV to this one by WWE (Though, technically if it's only on The WWE Network then it isn't really a pay-per-view any more because we pay monthly) and so you think it'd be a great show, but yet somehow all WWE can focus on is their draft and Smack Down! going live.    Plus, you know, announcing Randy Orton vs. Brock Lesnar for Summerslam, showing that is the real focus over this seemingly throw-away show.    But, hey, onto the matches!


The Highlight Reel with Chris Jericho and Randy Orton

This isn't really a match so much as a waste of time and a way to bring back Randy Orton without it being a huge surprise.    My guess is Y2J talks too much and takes the RKO.  We need to make Randy Orton look strong going into Summerslam since Brock Lesnar already looks strong in his UFC win.

Match One: The Wyatt Family vs. The New Day

This has been quite the interesting feud if only because it has been darker than what New Day is used to doing.   The tag team titles aren't on the line in any form but I don't think that matters here.   I'm not sure on the status of Luke Harper, but The Wyatt Family needs to look strong during this match and if the titles aren't on the line then they should even win it.    The Wyatt Family will defeat New Day with the return of Luke Harper.   Xavier Woods will somehow become entranced and join The Wyatt Family for a little bit and with the return of Luke Harper, Rowan and Harper will become tag team champions and the world will just get flipped, turned upside down.   Or, you know, New Day wins and the good guys prevail because WWE is boring and predictable.   But I like the other idea so much better.

This match was made after Natalya turned on Becky Lynch at the last PPV and if you want to see it continued since then you'd likely have to have been watching Main Event.   I understand the idea that Becky Lynch having a great match with Natalya can only help her career, but Becky Lynch still hasn't won me over.   What WWE needs to do is send Becky Lynch back to NXT after the draft and let her get to the point where she needs to be on the main roster down there.   Was Becky Lynch even NXT Womens Champion before coming to the main roster?  I mean, I dislike Charlotte but at least she had some matches which made her feel main roster ready in NXT.   I just don't feel like Becky Lynch was there when they called her up and a ten minute (or less) throw away match with one of the best of all-time in a feud no one cares about isn't going to change my mind on that.

Well, the draft has come and gone and one of the big questions I had has been answered: Sami Zayn and Kevin Owens are on the same brand now.    Given this bit of news, these two should totally be in a Hell in the Cell match at Summerslam, so I don't see why this feud has to end here, like they claim it will.   How about Sami Zayn wins by DQ when KO won't stop dishing out the punishment and then we get the rematch which has no rules.    Yeah, that seems good.

Well, Nia Jax was just drafted to Raw but Sasha Banks has said something on social media to the extent that her mystery partner won't be Bayley.   We've seen Paige and Becky Lynch fill this role but that seems less likely this Sunday, given the Lynch-Nattie match.   I'm going to go out on a limb here and say that Sasha Banks will bring back Naomi.   Naomi showed some new gear recently.  Is she cleared to wrestle?  I don't think she's injured, right?  Plus it could help with the whole Team B.A.D. history.  I'm pretty sure Tamina Snuka is hurt to the point where she couldn't be in this match though.   But yeah, let's say Naomi and then next month at Summerslam Sasha Banks wins the title.

Now that it has been announced in the draft that AJ Styles is going to Smack Down! and his friends are going to Raw (Though the same can be said for the other side of this match, oddly enough) I expect there to be some problems and, yeah, let's give the good guys the win here because Karl Anderson can take the fall.

Rusev will likely be building up his winning streak again.   His first victim was Titus O'Neil and now it is Zack Ryder's turn.   At this point, we might as well have Rusev take on all three remaining Social Outcasts at Summerslam.

First we had Titus O'Neil challenge for the US Title against Rusev and now the other half of the Prime Time Players is challenging The Miz for the IC Title.  Wouldn't it have been great if Titus O'Neil challenged Rusev again on this PPV and both Prime Time Players won the secondary titles on the same night?  Oh well.    I'm not a fan of The Miz in general and Darren Young seems to be on a push with Bob Backlund so let's give Darren Young the win in this one because anything is better than The Miz.

I'm not sure what the plan is going forward with the WWE Title.   So long as Dean Ambrose comes out of this match as champion the title will stay with Smack Down! but then what will become of Raw??  It kind of would make sense for Seth Rollins to win the title here- much like how he cashed in during a similar situation only with Ambrose in this match instead of Lesnar- and then Rollins can feud with Roman Reigns on Raw, but yeah, this whole title situation needs to be addressed from the draft.   Still, let's say... Seth Rollins wins because he never really lost it in the first place.