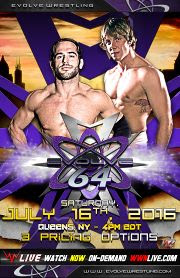 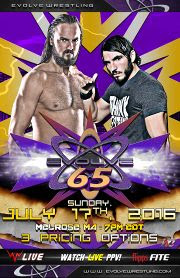 EVOLVE 64 opened with Johnny Gargano defeating Cedric Alexander.   The crowd chanted "This is awesome" before the match even started, as well as "Both these guys".   As I watched Cedric Alexander, hoping Gargano could bring out the best of him, I just felt like his moves were sloppy (like the suicide dive outside the ring and the move which followed it inside the ring)   Alexander tapped out and I just have yet to see anything I like about him.   I'm likely going to lean towards the side of not liking Cedric Alexander soon and I'm okay with that.    After the match, Johnny Gargano was beat down by Drew Galloway, saved by Drew Gulak (Drew vs. Drew) and then Chuck Taylor (now known as "Dustin") and it was basically signed for the main event that Drew Galloway and Dustin would compete for the tag team titles.

Up next was a four way match between Darby Allin, Chris Dickinson, Fred Yehi and Tony Nese.  I expected Yehi or Nese to win right away.     Allin tried to get an early jump on things and Dickinson threw him right out of the ring and it was noted on commentary that Allin was dead.    That was a rough start for that Misfits-looking dude.    So, Dickinson hits a top rope Razor's Edge on Darby Allin- who seems to be EVOLVE's answer to Spike Dudley or Mikey Whipwreck (a jobber who can bump well, with all due respect to both of those men) and then Nese snagged up the pin and win.   I kind of wish Fred Yehi won that one though.  After the match all four men show each other respect and more so for Darby Allin since he almost died in this match several times.    Commentator guy says if there is another CWC next year he wouldn't be surprised to see Darby Allin in it.   Ugh.  Please no.

And then Jigsaw came out and I was like, "What?"   Didn't he lose his mask at one point and start wrestling under a different name?  I *believe* the last time I saw Jigsaw he was in TNA under some weird name.    Then Zack Sabre Jr. comes out and you know Jigsaw isn't winning this one but it's going to be good.    Does Jigsaw vs. ZSJ mean one day we could see ZSJ vs. Super Dragon?? Please????  (I also partially wonder now if maybe ZSJ could make Cedric Aleblahnder look good.)    This was just a really outstanding match between these two.   Jigsaw fought perhaps harder than anyone I've seen thus far against ZSJ while yet also being stretched and twisted in ways which the human body should not bend.    ZSJ got the win after a soccer kick but what an effort put forth by Jigsaw.  Wow.   Such an incredible match.   Perhaps going into my favorites of 2016.

One of the fun parts of this EVOLVE show- which they do now and then- is that the matches flowed together from one to the next with wrestlers staying in the ring.   During the next match- Matt Riddle vs. Roderick Strong- Matt Riddle won after a hard fought contest and then called out Timothy Thatcher.   Now, if you have yet to see Matt Riddle fight and want to know what this guy who is on a Brock Lesnar-like level (only without looking so jacked) is all about then all you have to do is watch this match to be won over.   Anyway, Riddle called out Thatcher, then as Riddle was leaving Marty Scurll made his entrance for the next match.

Is Marty Scurll still champion in PROGRESS?   Until I watch another event that proves otherwise, I'm going to assume that he is.   But, really, I want to see Marty Scurll or ZSJ as EVOLVE Champion.   Has ZSJ fought Matt Riddle yet?  I want to see that.   And just as an off-the-record type of suggestion, if WWE doesn't have any interest in certain EVOLVE talent (Matt Riddle, Fred Yehi, Drew Gulak, Marty Scurll, ZSJ, Timothy Thatcher and so on) then I would recommend FTC making some action figures for EVOLVE because a lot of people crossover into different promotions and I wouldn't mind having action figures for just about all of them.   But yes, as you'd expect, The Villain and Thatcher had a most excellent match and it really has made me a fan of Timothy Thatcher now.


TJP came out post match for an attack which brought out the rest of Catch Point which- you guessed it- brought out Drew Gulak and "Dustin" for the tag team titles match.    This tag match was wild and a lot of what you might expect to happen between these four men did but the great surprise came at the end when Drew Galloway and "Dustin"- who was referred to by the commentator as Chuck Taylor still- captured the gold.    What does this mean for Catch Point?  What does this mean for EVOLVE?   You know, Drew Galloway made an interesting point and it was that he loves independent wrestling and he loves EVOLVE but now EVOLVE is being backed by the machine (WWE) and to an extent you can agree with him even though he is playing the role of the heel.   And that is just how good Galloway is and this whole feud and part of EVOLVE is right now.


EVOLVE 65 opened with Cedric Alexander vs. Tommaso Ciampa and it seemed like yet another chance for Cedric Alexander to prove to me why I should like him-- as in, why I should see what all of these other people see.   I've read spoilers about the first round of the CWC and so it makes sense that Cedric Alexander won this match based upon that, but also, I'm looking for Ciampa to go on a losing streak and snap.   There was this one series of near falls in the ring and when it was done and both men stood up, Cedric Alexander hit this huge kick to Ciampa and that actually impressed me.   So, yes, after watching this I am becoming somewhat more a fan of Cedric Alexander.

Ethan Page defeated Travis Gordon next and then got on the mic to hype the New England crowd up.   This was a fun little bit for the live crowd I'm sure but not as much for those watching at home.   Here is to hoping that with Johnny Gargano being on his way out of "independent wrestling", Ethan Page can take over the role of Face of EVOLVE and thus get some matches which aren't one sided.

In what could be the main event in any other promotion in the world (Yes, including WWE), the third match of the night saw Matt Riddle defeat Marty Scurll by submission.   This match was so much fun and I just love both of these guys so much.    The story with both Riddle and Scurll is that they are both that heel you like to cheer.    You cannot deny the talent of either man and so no matter how much they act like the heel, they'll still be fan favorites in my book.   At one point during the match, Marty Scurll faked high-fiving a fan at ringside and instead ran his hand through his hair.   But the fans still seem to love both these guys- as do I- and wow was this a great technical match with no punches pulled.    Definitely stole the show for me.

In a six man tag, Catch Point (Drew Gulak, Fred Yehi & Tracy Williams) defeated the makeshift team of Chris Dickinson, Darby Allin & Jonathan Gresham.   I still don't care about Darby Allin.   Chris Dickinson was quite good in this match and I'd really like to see more of him in general.   Jonathan Gresham was recently in ROH, but he also is supposed to be bringing back the Suicide character in TNA so it will be interesting to see if he plays into the faction with Drew Galloway or not.    A decent enough match which lead to a lot of in between match stuff and then as Catch Point tried to keep TJP and Timothy Thatcher apart they ended up just going into the next match, in which Thatcher defeated TJP and at this point in time, there are, like, at least five guys I'd rather see that title on than Timothy Thatcher.    Thatcher has decent matches but he's never really match of the night.   If I was booking EVOLVE- and I'm not- I'd put my money on Matt Riddle and have him actually hold the EVOLVE Championship (not just carry it around) and then have Ethan Page chase for it.

In a fun, CWC showcase Zack Sabre Jr. defeated Tony Nese.   I'm not sure what Tony Nese is going to do in the CWC tournament because I don't remember all of the spoilers I read, but my money is on ZSJ to go to the finals against Ibushi based upon the brackets and so, yeah, protecting ZSJ here does make sense, though at the same time if ZSJ won the CWC tournament and lost to Tony Nese here it'd make for an interesting story in EVOLVE down the line.   Regardless, ZSJ is the man right now and this match just proves it.   When the CWC has gone a little bit further and the matches start going live, I'll tell you... It will be some of the best wrestling we will see not only all year but perhaps in our lifetime.

Drew Galloway defeated Johnny Gargano in the main event which only made sense since, as stated earlier, Gargano is on his way out while Galloway is one half of the tag champs and this just gives him another feather in his cap.   In some ways I'm going to miss Johnny Gargano in EVOLVE, but at the same time I feel like he's going to dominate in NXT eventually as well as the simple fact that it's nice to mix things up in EVOLVE as well.   But now who else will step up to this faction of Drew Galloway and his friends?  It's time for EVOLVE to do what they do best and that's start making some more stars!

Posted by Joshua Macala at 6:29 PM