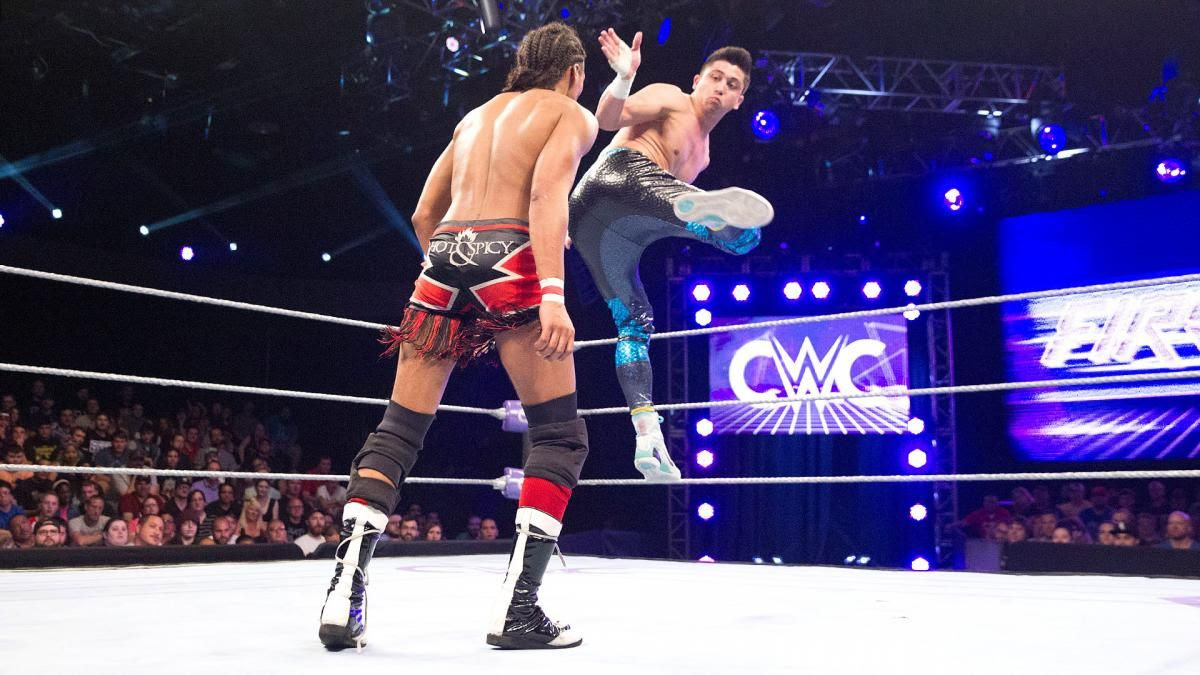 Official results via WWE.com can be found here: http://www.wwe.com/shows/cruiserweightclassic/2016-07-20

It's kind of weird being into this second week of the CWC if only because we're still at that point where you can tell who is going to win (Guy I Know vs. Guy I Don't Really Know) and yet I'm still excited as ever watching this second episode as we get to the first 8, the full half of Round 2.


Match One: Tajiri vs. Damian Slater

I don't know a lot about Damian Slater other than the fact that he is from Australia (they talked about that a lot) and he is not related to Heath Slater.   He has this generic cruiserweight quality to him, like you could just buy an existing Tyson Kidd Mattel action figure and have the same general idea of what's going on in terms of his looks.   I mean, Tajiri is fairly legendary so losing to him isn't a bad thing- and it was expected- but watching Tajiri kick the crap out of Damian Slater and put him in the Tarantula was certainly fun.   Tajiri advances and hopefully with some actual competition his matches will only get better.  Yes, I will say that Damian Slater is one of the first guys in this tournament who hasn't really impressed me much.

TJ Perkins is currently in EVOLVE though he's been just about everywhere except WWE.   TNA (and Hulk Hogan) saddled him with the terrible Suicide gimmick when the look and name got changed over to Manik.   I mean, TJ Perkins is already a star and he doesn't even need to hype himself up to me-- as someone who watches EVOLVE.   I'd actually really like to hear the opinions of some of the people watching the CWC who only really watch WWE and thus haven't seen half of these guys before but I don't know if they exist as I feel everyone watching the CWC also watches the other promotions or at least made themselves familiar with most of these guys.   Oh, and Da Mack (not The Mack from Lucha Underground) is this guy who wants to be the German Michael Jackson.   Sorry, Mack, we already have a Japanese Michael Jackson and his name is Shinsuke Nakamura.   Back to where from whence you came!   Yeah, TJP was showcasing his skills in this match while Da Mack mainly reminded us why someone had to lose.

Lince Dorado is representing CHIKARA I suppose while I'm not sure what to make of Mustafa Ali.   This was a decent match but it was all Lince Dorado for me and I was certain from the start there was no way Mustafa Ali was winning and for the third straight not only was I correct but I wasn't really too interested in seeing Mustafa Ali after this match.

Akira Tozawa is from Dragon Gate and they noted he was best friends with Apollo Crews, so WWE will likely give him a deal sooner rather than later.   Tozawa is a dark horse to win this whole thing and I can't find a lot of information about Kenneth Johnson on ye ol' internet box.   So, yeah, this was a showcase of what Tozawa can do, much like we've seen all night and, I mean, if I had to pick someone of the four losers tonight who stood out the most to me it'd be Kenneth Johnson, why not, but if none of these four losers were seen in WWE again it wouldn't be a bad day for me.   Yet, we have Tajiri, TJP, Lince Dorado and Akira Tozawa moving onto the second round which means business is picking up and the eliminations are starting to become less predictable.    Well, that is after we get through the second half of Round 1 at least.

So this week was a matter of seeing four guys display their skills and four guys basically being the jobbers to them in this tournament.   Matches were announced for next week but all I remember them saying is Brian Kendrick, who will likely defeat his opponent.   For Round 2 matches right now then we'd be looking at some great matches with more meaningful eliminations, though again, I still look forward to these last eight matches we still have in Round 1- as I can't predict Gargano-Ciampa other than to feel like this whole tournament could be for Johnny Wrestling.
Posted by Joshua Macala at 5:54 AM