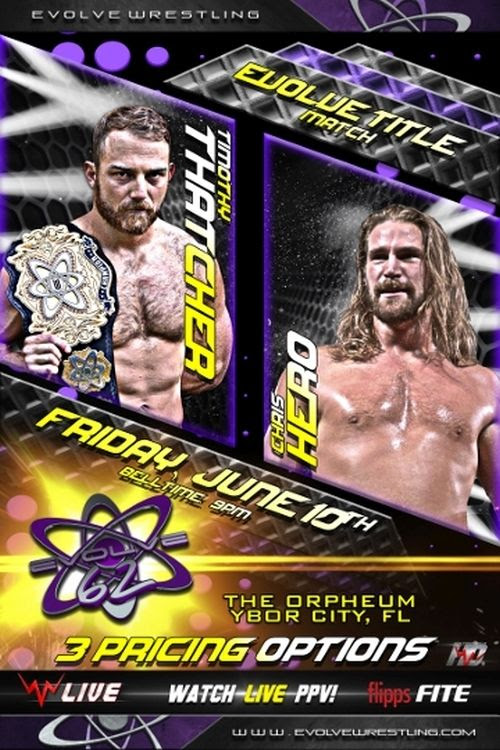 It seems like only yesterday EC3 showed up in EVOLVE and these matches were being booked for June, which felt so far away.   And now here we are.  Making more history.   Since EVOLVE runs two PPVs on a weekend- they had 62 on Friday and 63 on Saturday- I'm going to put my thoughts on them together.

The opening contest of EVOLVE 62 saw Fred Yehi defeat Anthony Nese.   The only other time I saw Fred Yehi was when he lost his CWC qualifier so it was nice to see him on the winning end here.    After the match, Anthony Nese said he was on a bad losing streak and wanted to turn things around.   I've always thought of Nese as being one of those guys who could go to NXT like Gargano and Ciampa, if only because I know Nese has appeared for Tommy Dreamer's House of Hardcore, and Tommy is on good terms with WWE, so...

Ethan Page defeated Darby Allin in the second contest and to be fair, Darby Allin had a story the commentators were trying to tell here but he just wreaked of jobber.

Matthew Riddle defeated Cedric Alexander in what was I imagine one of Cedric's first non-ROH matches in a while at this sort of level.   I've never really been a fan of Cedric Alexander, maybe ROH ruined him for me, but I have said it before and I will continue to say it until it happens: Matthew Riddle is ready to go to NXT.   He might even be ready for the main roster of WWE at this point because there are certainly worse wrestlers up there (SorryNotSorry Braun Stroman) Everything from his look to in ring style just makes Matthew Riddle this complete package that WWE could market the hell out of, but for right now I am glad seeing him in EVOLVE.

I admittedly don't know a lot about the Bravado Brothers and really only remember them from the last time I watched EVOLVE and thought they were the Ballard Brothers, but in any case, yes, I was happy to see Catch Point retain the tag team titles in their match together.    Something about Drew Gulak is magic and Tracy Williams is really growing on me as well.

In the EVOLVE Championship Match Timothy Thatcher defeated Chris Hero is a most excellent match.   I'm not sure why, but I had to look something up about Timothy Thatcher after this match and it took me down a rabbithole where people questioned whether he was British or if it was all part of the gimmick.   Needless to say, I'm not google searching for anything again for a while (or at least until later tonight)

The main event of EVOLVE 62 saw Drew Galloway and EC3 defeat Johnny Gargano and TJP.    Think about this: two of these men are former WWE employees who are currently under contract to TNA, a company WWE refuses to acknowledge.   The other two are part of the CWC for WWE.   It is probably as close as we're going to get to a WWE vs. TNA feud right now, given that each side is under contract to its respective company (Not like AJ Styles vs. John Cena at MITB)    People constantly annoy me when they say that Drew Galloway was fired from WWE for a reason and he shouldn't be in TNA or that TNA sucks for hiring him and all that.    Watch this match if Drew Galloway and/or EC3 still haven't won you over.   It was off the charts insane. 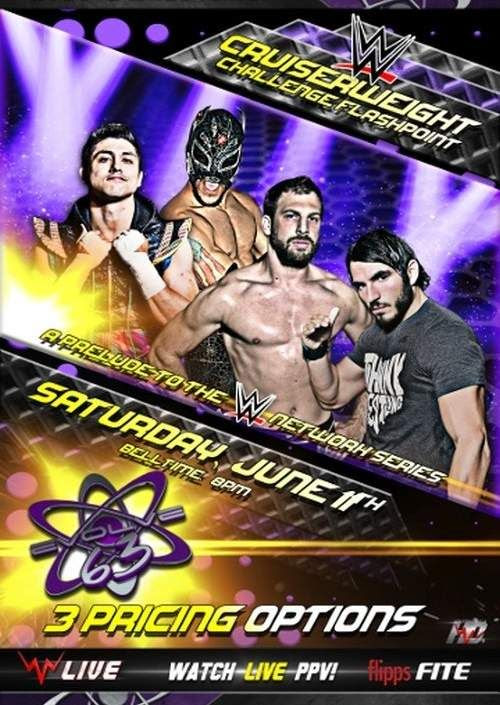 I'm not really a big fan of Cedric Alexander so seeing him get the win over Fred Yehi- who I do enjoy- felt like a strange way to kick off EVOLVE 63.    It's like, just because he didn't re-sign with ROH and might be on his way to WWE now he's some sort of big deal, right?  I mean, Cedric Alexander had a decent enough showing in this match but it only made me more of a fan of Fred Yehi and has not won me over on Cedric Alexander.

Up next was the tag team match of The Bravado Brothers defeating Darby Allin and Jason Cade.    The best part was when Jason Cade used the basketball hoop to his advantage, otherwise a tag team match that neither hurt nor helped either team involved.

I was somewhat excited to see Trevor Lee come out next- to see him outside of TNA- but I was even more excited when I found out his opponent was Matt Riddle because I don't have time to remember who is fighting who in advance and I do like to be surprised.   Trevor Lee really took the fight to Matt Riddle and I wonder if Lee will take sides in this TNA vs. NXT war.   I know I tend to sing the praises of Matt Riddle a lot but this kid is just one of my favorite professional wrestlers right now.    Not only does he have that "It" factor (His gimmick is more clearly defined than I'd say 98% of professional wrestlers) he also brings a sense of realness to wrestling which it definitely needs.   In Japan, they tend to train for wrestling and MMA and they don't really seem to do it as much in the United States, but yeah, I mean, this is leaps and bounds above when Ken Shamrock came to WWE because Matt Riddle isn't trying to be the good guy-- he's the guy that will mess you up for real.   I love it.  Trevor Lee had no choice but to tap as he was submitted in a way which I have not seen before.    Given the proper grooming and time, Matt Riddle could be the next Kurt Angle, given his coming over from MMA like Angle did the Olympics.    Trevor Lee was also fun in this match as it was what they'd call smashmouth-- just hard hitting like a good old fashioned fight, but, you know, with lots of mat technique.   Matt Riddle has this one move where he kind of drops down to the mat and kicks up to his opponents head (Like a lowered insuguri) and it's just too fun to watch.

Timothy Thatcher defended the EVOLVE Championship against Tracy Williams next.   EVOLVE takes their title pretty seriously, so you know it's a big card when they still have three more matches after the title match.    Thatcher ultimately made Tracy Williams tap out via armbar and, I mean, to be fair Thatcher just needs some real competition because right now it's like no one else is even in the same league as him.   Matt Riddle comes out after the match but so does Stokely Hathaway.   Hathaway says neither of these two men is in the CWC but his man TJP is.   What it boils down to is Thatcher granting a title shot to TJP (which Thatcher should retain in) and then after that he says he'll face Matthew Riddle which could be a really tough fight for him and one I really look forward to seeing.

The CWC Flashpoint match was next.   It had four competitors from the CWC in it- Lince Dorado, TJP, Drew Gulak and Johnny Gargano, though they also added Anthony Nese under the stipulation that if Nese wins this match he'll get a spot in the CWC.   Of course, no one else has anything to gain really by winning this match other than bragging rights going into the CWC- which will feature 28 other competitors aside from the four confirmed names going into this Flashpoint match, so you know, still a strong playing field out there.   Obviously Anthony Nese is winning this one and going into the CWC.   Some woman interviewed each participant in this match before they came out and it kind of should have been done in better lighting.   It was odd for this to be a five man match instead of a four corners match.    Johnny Gargano was surprisingly eliminated first by Drew Gulak.    Then, when it came down to it, Anthony Nese did indeed win and he is now headed to the CWC.    This was such a good match that I expect to see all five of these men in action figure form by Mattel one day so that I can recreate this match with them.

Drew Galloway and Ethan Page fought in a match without rules, which was just a brutual, going around the whole building brawl.   This was not for the faint of heart and all I could think while watching this was how it was EVOLVE which won me over on Drew Galloway as a wrestler (sorry, TNA) because EVOLVE posted a free match between he and Roderick Strong and then they had that magnificent cage match that I just can't get over.    This is just another reason to love Drew Galloway, sure, but it also showed me a side of Ethan Page I had not seen before and so I really respect both men so much more after seeing this match.

In the main event EC3 and Johnny Gargano fought in a Last Man Standing match.   Drew Galloway came out to help EC3, but then Johnny Gargano got help as well, not only from some other wrestlers but even the referee hit an RKO!    Gargano won this one because I feel like EC3 and Galloway had to split their wins and losses, but this was still a fun match.   It wasn't as hardcore as the match before it but it did what it needed to do and, well, I mean... Just think about this.   Johnny Gargano is currently in NXT.   EC3 used to be in NXT.   If you told me that these two men would ever meet in the ring, I'd probably wonder how it could happen.   And here is EVOLVE bringing it to you.   This is one of those times we're going to look back on and go "How did they do that?" but for right now I'm just going to continue to enjoy it as I always tend to enjoy EVOLVE.