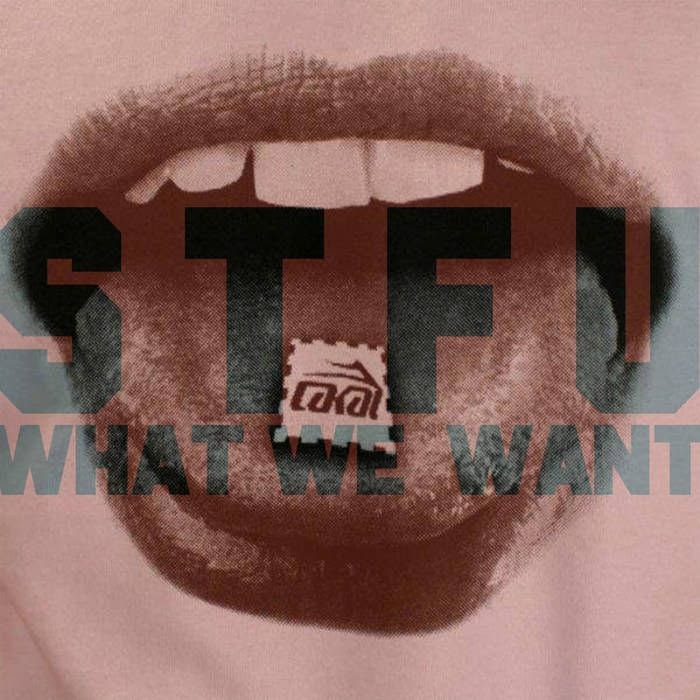 If you told me that I was going to hear new albums from both SPC ECO and Bloody Knives this year (Thanks, Saint Marie Records!) I would be likely to believe you because bands tend to release music-- it's what they do.   But if you then went on to tell me that the guy who makes these driving synth beats for SPC ECO (Dean Garcia) was going to partner with the guy who sings in Bloody Knives (Preston Maddox) to form something called STFU, I'd probably tell you to shut the fuck up because I wouldn't believe you.

Looking back through the years of listening to music, I can't even begin to compare this with something else because nothing does either of these two artists justice.   I mean, Tom Morello has a distinct guitar playing style, so maybe him and Eddie Vedder getting together could be similar, but that still would be something I'd only likely listen to for the Eddie Vedder factor.  I've heard rumors of Zach De La Rocha recording for vocals for songs created by Trent Reznor and I guess maybe that could come somewhat close, but you know what?  We haven't heard those songs and probably never will for whatever reasons.

Everything that I love about both SPC ECO and Bloody Knives comes out in STFU.  Now, in some ways you could think of this as being like SPC ECO only taking out the voice of Rose Berlin and replacing it with that of Preston Maddox (so in a sense, an SPC ECO fronted by Bloody Knives), but this does something beyond that; it is as if Bloody Knives has tainted the music itself as well.

The first song is called "Secret" and as the lyrics come through the chorus of "Now you know my secret" it only feels fitting because the release of this album wasn't met with any fanfare that I know about- rather I just saw it posted on Facebook one day and thought, "Whoa.  Wait, what?"   Usually these are the types of things I know about months in advance and have that anticipation about- that build- but this one was just like "Bam, here it is!".

If you're a fan of SPC ECO and Bloody Knives you'll obviously love this, but I could kind of see people being fans of one and not the other for some reason but if that is the case this might be the glue that holds together your love for both of them.  (Which means if you're a fan of Bloody Knives but don't think SPC ECO is "dark enough" then listening to STFU might change your mind about SPC ECO and vice versa, only with the thinking that Bloody Knives is "too dark")

From the dark and desolate sounds of Stabbing Westward to influences of Garbage and Gravity Kills, the songs seem to fall into a category of industrial synth, something like Front 242 maybe, but they all have this calm tempo about them as well.   None of them really comes out crashing hard in the way that you'd think of Nine Inch Nails' "March of the Pigs", but that doesn't impact their overall intensity at all as sometimes it's not about the loudest dog in the fight but rather the most sincere.    Even if you've never heard of Bloody Knives or SPC ECO before you can kind a certain comfort in these songs which other artists just simply cannot provide.    Simply put: this is the best surprise album of this year and maybe even of all-time.