We first saw this in stores around the holidays and we already had a lot of toys on our wishlist so we decided to wait until after the holidays in case we got gift cards or cash plus our birthdays both come up as well.    It took longer than I expected it to but we did find this once again in Walmart and I knew it had to be mine.   I was just thinking about Casey Jones not that long before this because of his Dimension X figure and how he is only sort of masked.    This vehicle also includes an exclusive unmasked Casey Jones figure, which I would likely have bought had it been single carded.

So, just to break this down by the numbers though, this vehicle with figure goes for about $20 at mass retail.   Walmart had some odd price on it like $19.97 I think.   Most single carded figures are moving back up to the $10 mark- I think they're $10.99 at Toys R Us, $9.99 at Target and $8.99 at Walmart.   In that case, this is about ten dollars for the Slamboni itself then, since the figure would be about half the cost.    That's not a bad deal at all.

There are four discs included which you can shoot out of the front of this and overall this just has a neat design to it.    I think that one of my biggest problems with vehicles for the Turtles is that I want something which they can all ride in together and that's the Party Wagon (or Shellraiser) and since we have the Party Wagon why do I need something else to drive around Mikey or Leo, right?   Plus, buying another vehicle that comes with another Turtle just throws off my balance of fours which is still out of whack.

Any time Playmates wants to make vehicles for characters other than the four main Turtles I am welcome to it.    A motorcycle for Tiger Claw?  Sign me up.   Some kind of beach buggy looking thing for Mondo Gecko?  Show me where and I will buy.    So, yes, this was a good choice simply because of the Casey Jones factor and, well, the Party Wagon can get crowded with four Turtles, April and Metalhead.

Casey Jones comes with a hockey stick and bat and when I put them on his back I noticed he didn't fit in the Slamboni very well.  I saw a part on the left side for the hockey stick and was like, "Well, that's cool" and then Quentin informed me that I could put the bat on the other side because he's a big helper.    Having a place to hold the weapons since they don't really fit on Casey Jones' back while he drives is always a plus.

Something I also didn't realize until after we got home and opened it up is that you can open up the front and put a Turtle or someone in there.   I had Savage Mikey nearby when I took the photos, but Quentin told me that Raph has to go in there because of all the Turtles Casey Jones likes Raph the best and I guess I can see that.

I can only feel our TMNT Universe expanding as Quentin is now about them more than anything else.   This is a nice addition to the collection, something which Quentin has already been playing with (he already lost a disc behind the couch) and it's just oh-so-much fun. 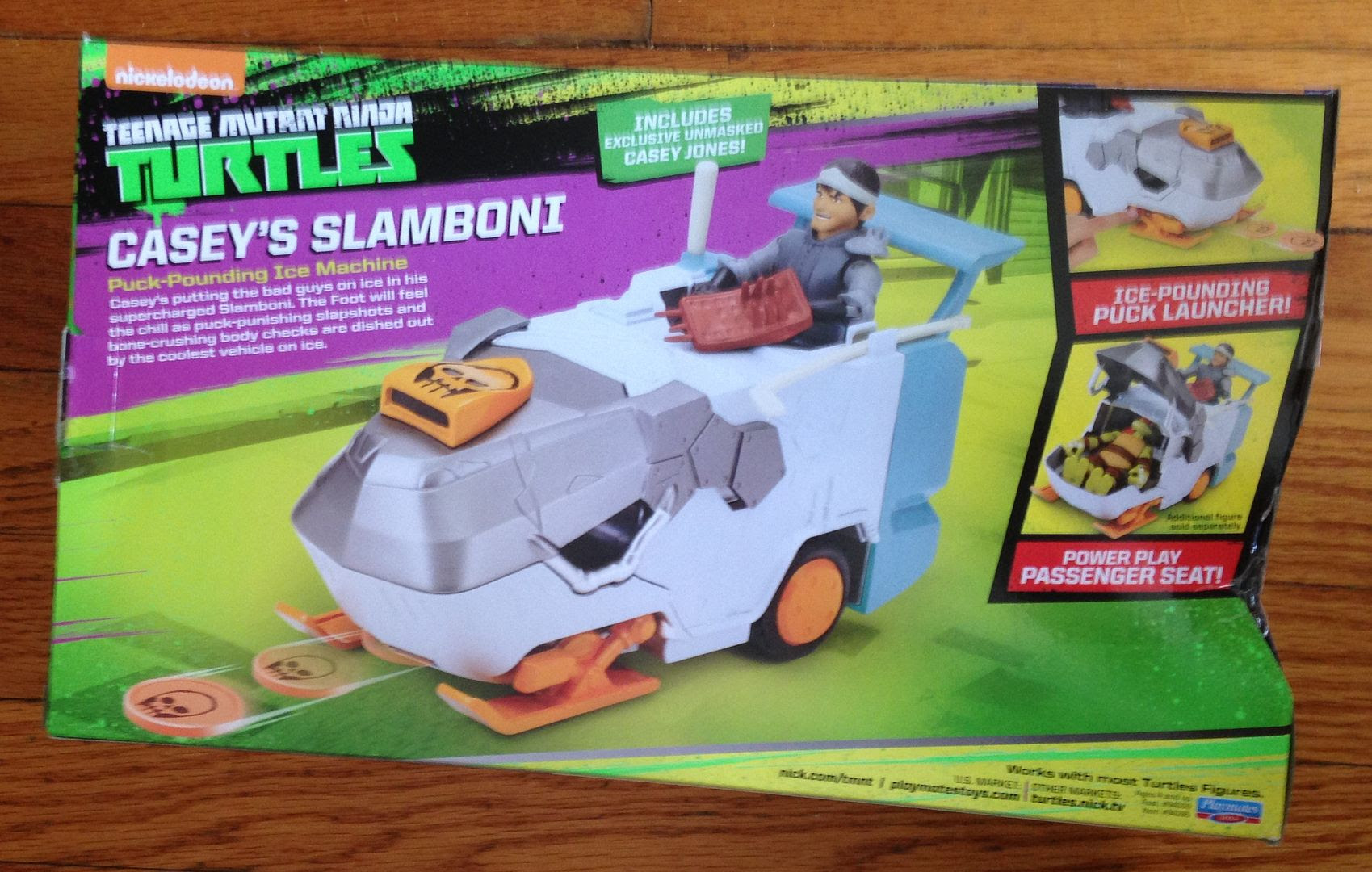 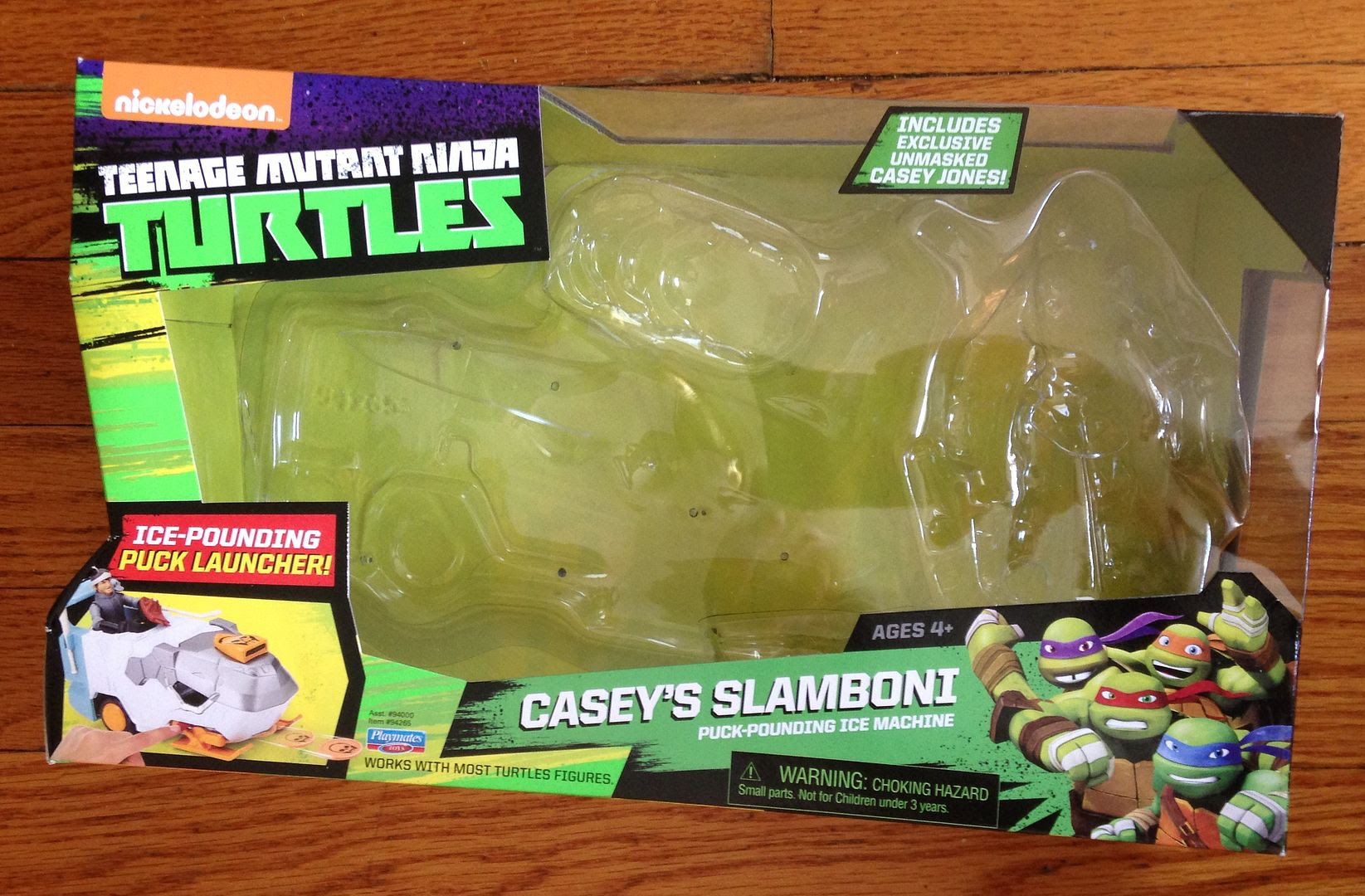 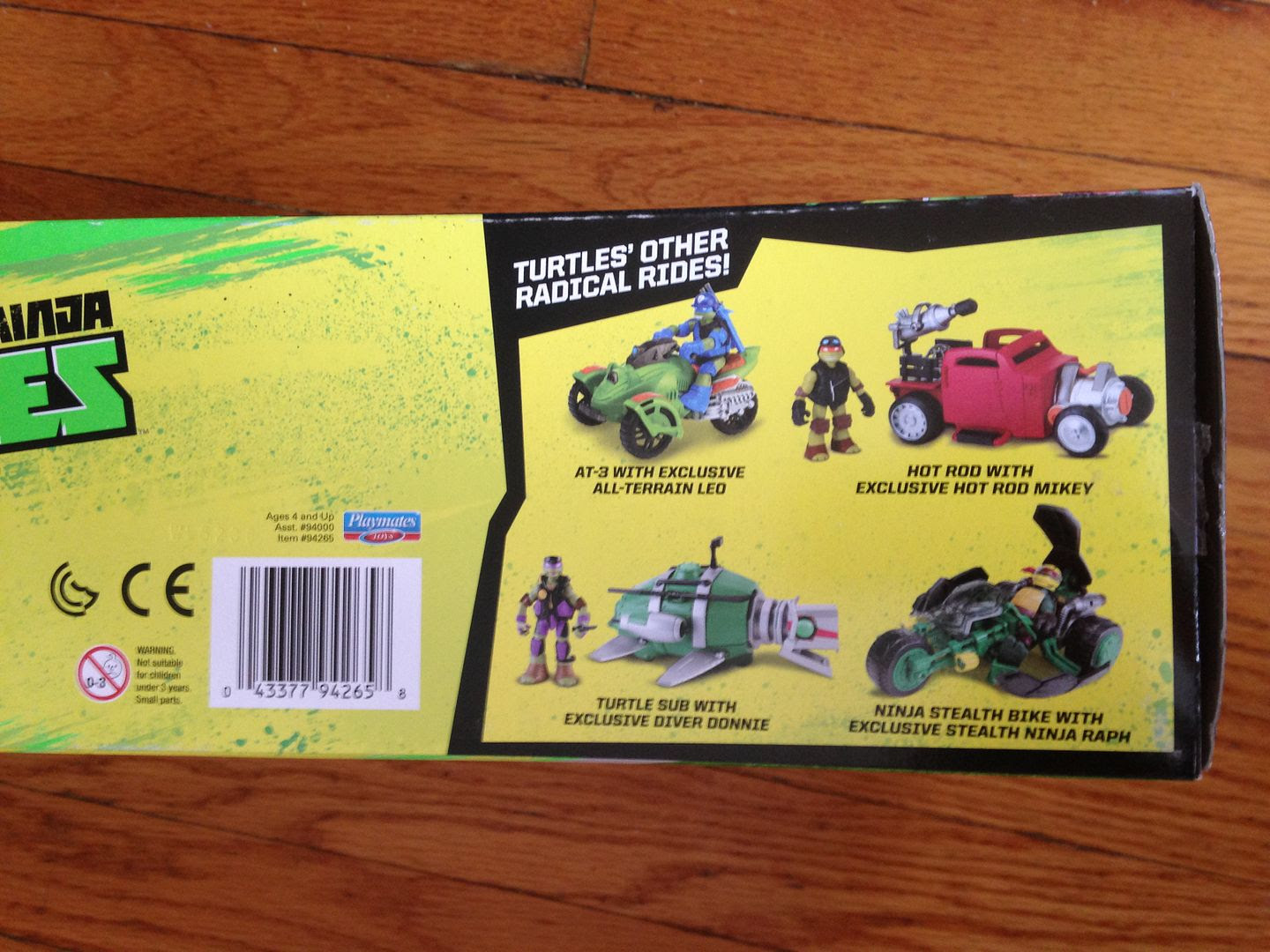 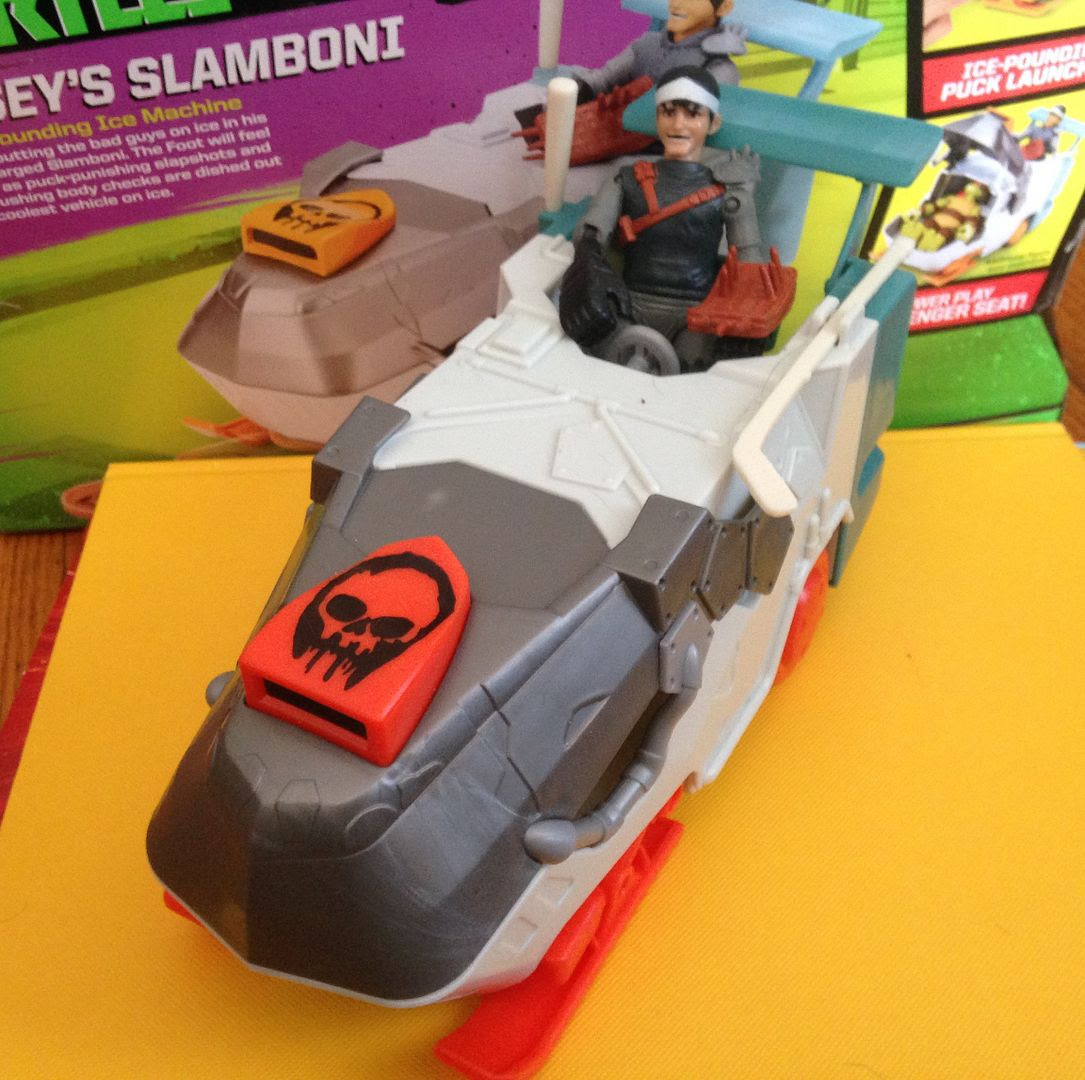 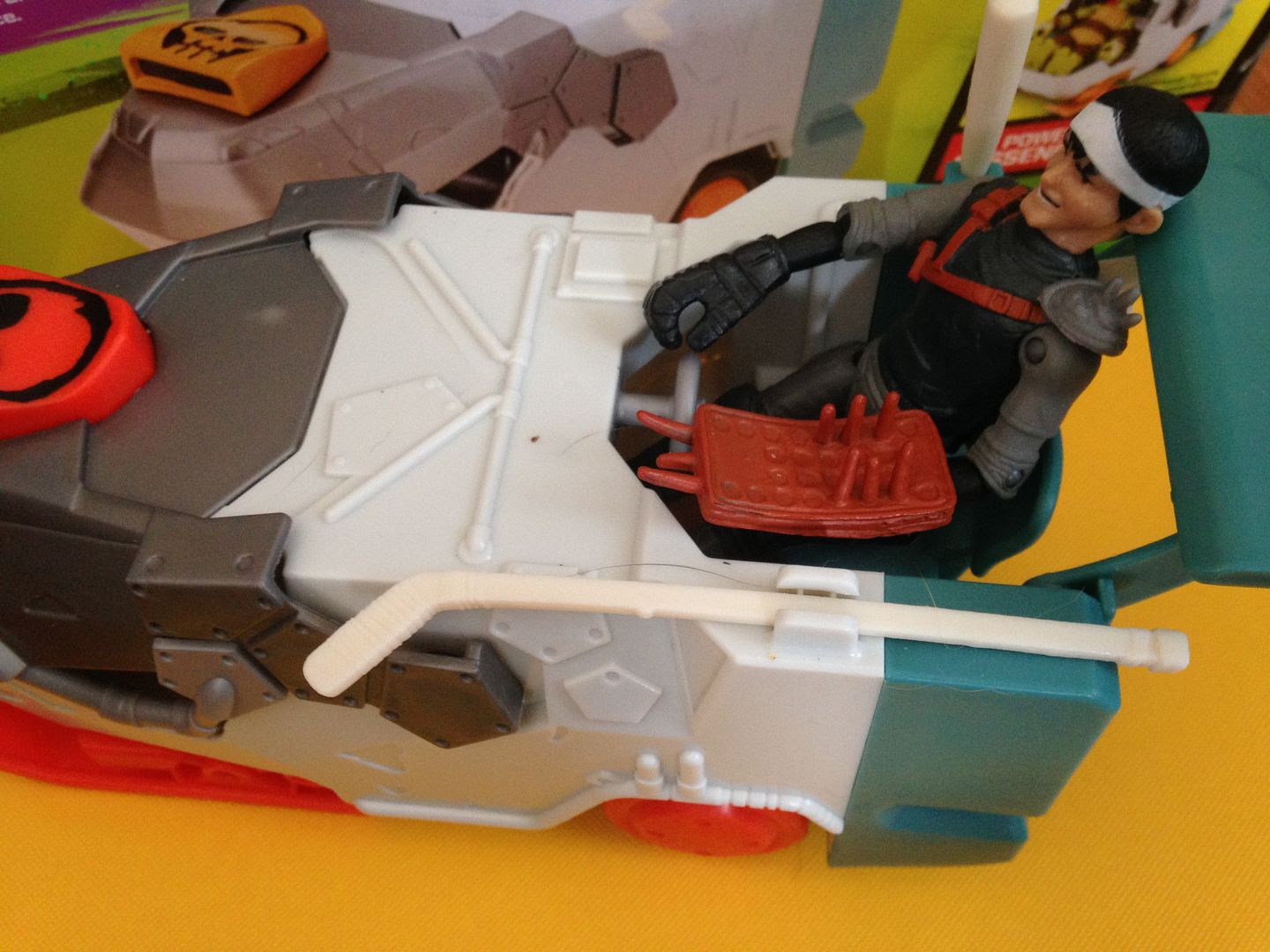 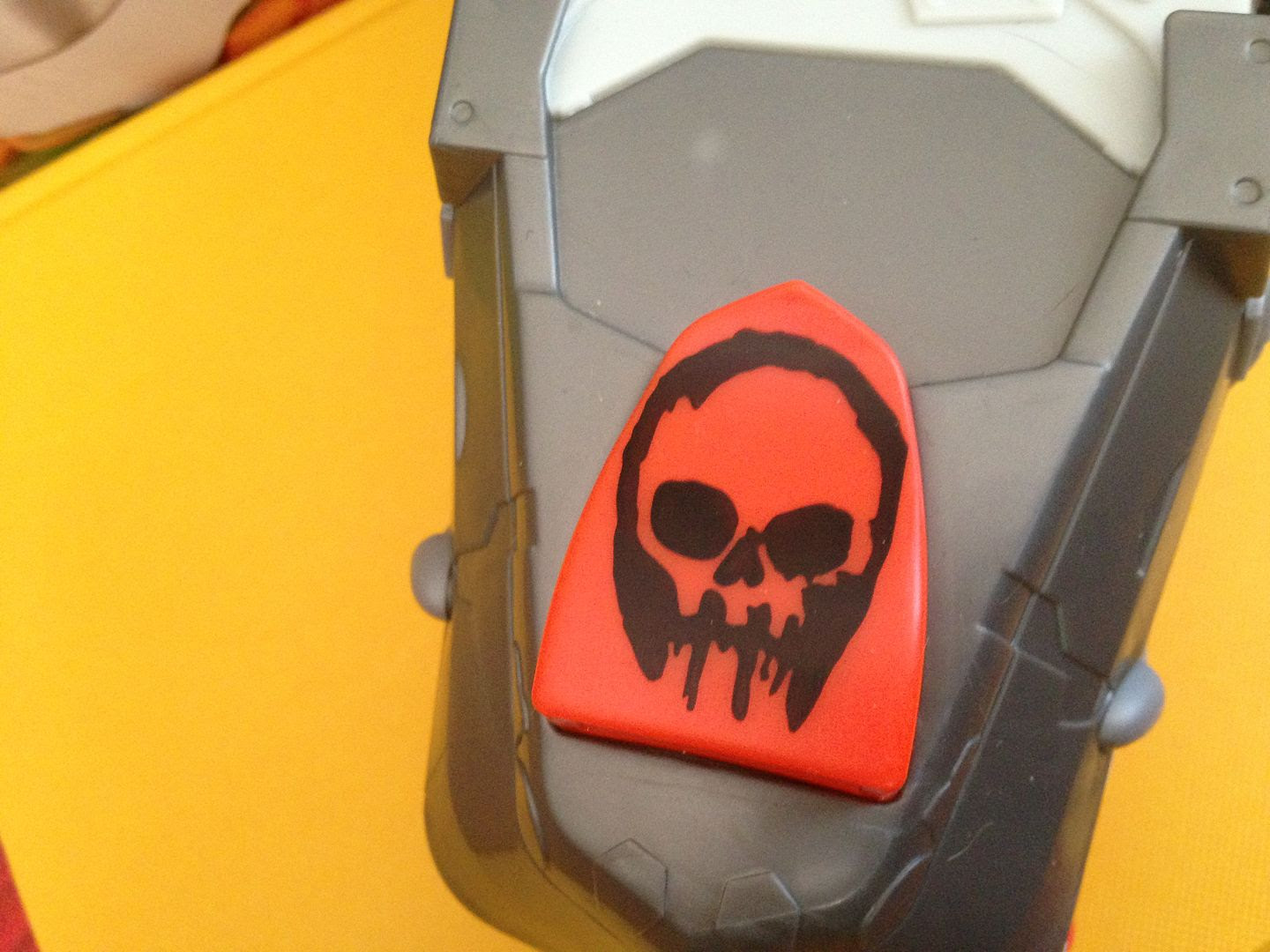 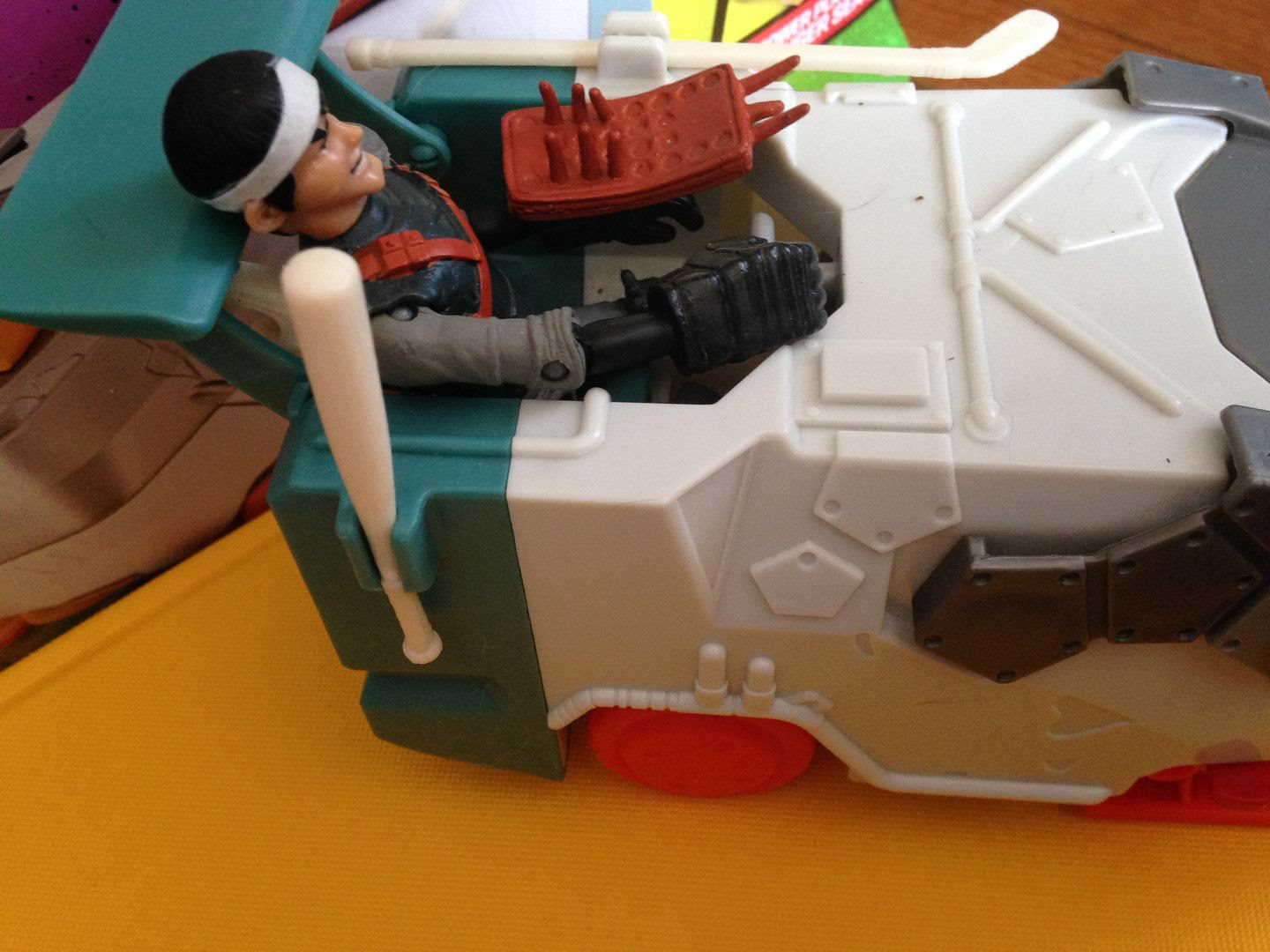 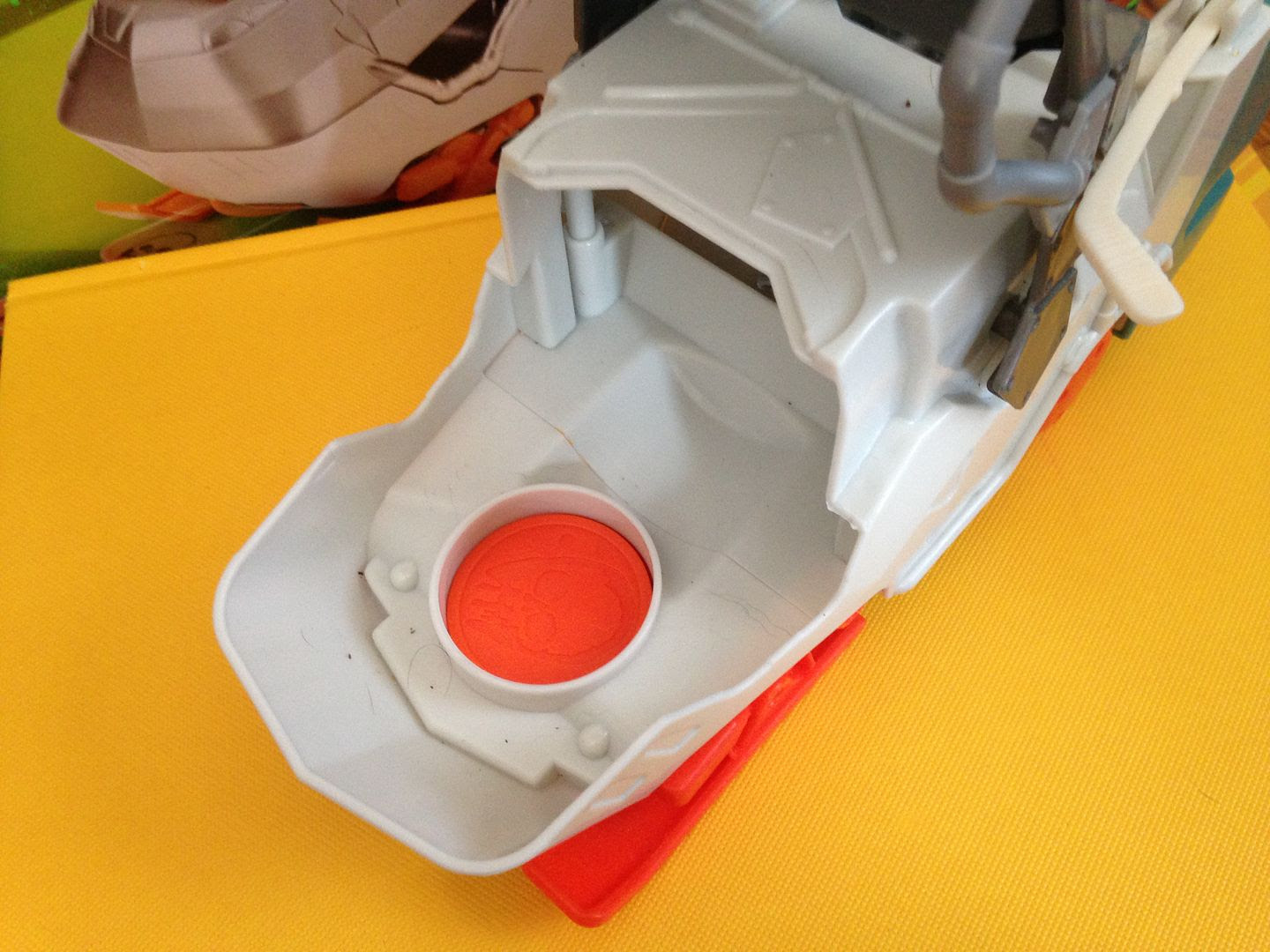 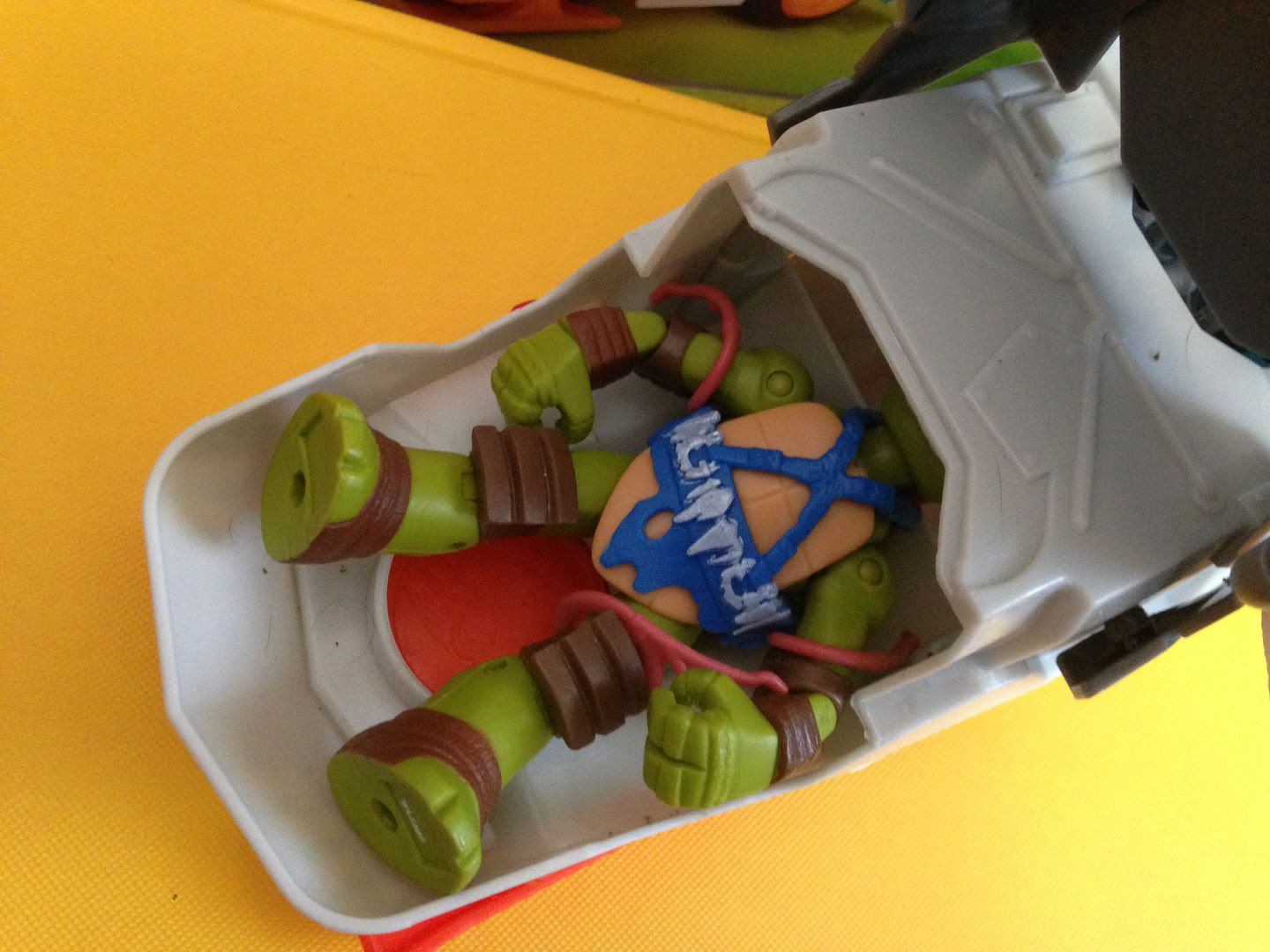 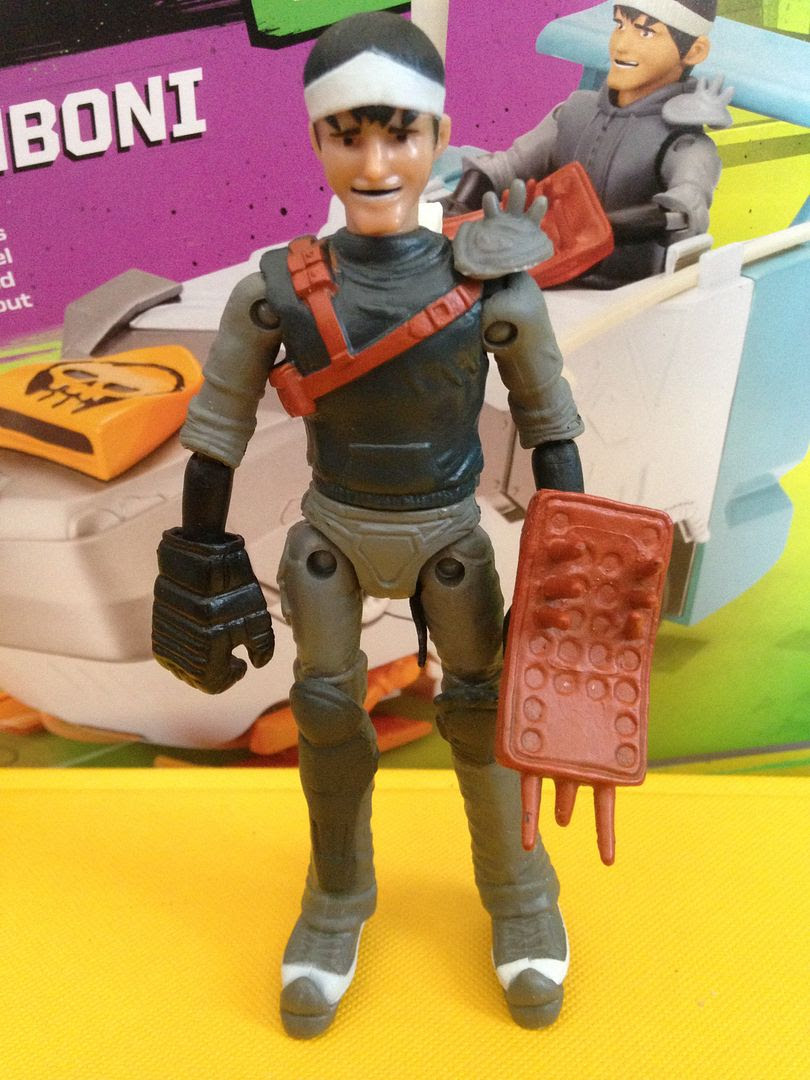 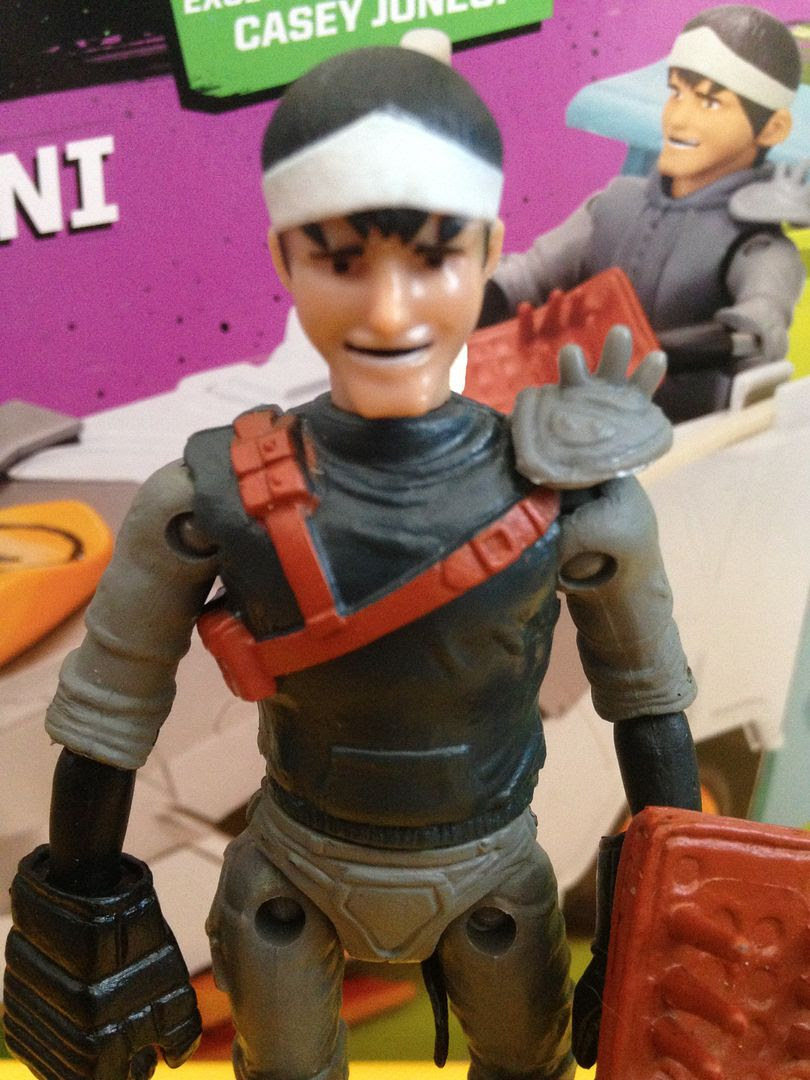