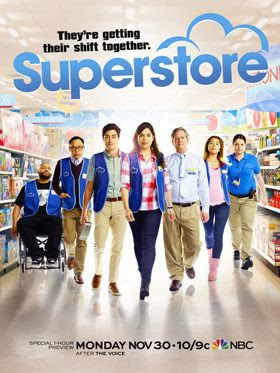 One time when my wife went to do something without me- I believe it was a work related holiday party but it might have been something else- I saw the first three episodes of "Superstore" on Hulu and decided to give it a shot.   It was a nice way to pass the time, with little bits of humor here and there and the sort of characters that you could build many seasons around- not because of the obvious ones in front of the camera all the time but the ones in the background that only occassionally get to chime in.    And then, this past Tuesday, I went to look for a new episode of "Superstore" and it wasn't on Hulu.   I went to iMDB to find out when it'd come back and apparently after the eleven episodes this show has reached its Season One conclusion.

However, my trip to iMDB also provided me with the knowledge that "Superstore" has been renewed for a second season already so that is good considering that they kind of ended on a cliffhanger of sorts.     While the show revolves around people working at a Walmart/Costco type of place, they also have storylines which run from episode to episode.    I know it seems weird to say it, but I remember a time when comedies weren't really supposed to have stories and were just supposed to be funny but this show is both.    It has enough characters and enough stories within all of them to go on for quite some time and it reminds me of anything from "The Office" and "30 Rock" to "Taxi" and "Soap".

Since the first season was only eleven episodes (Though some shows get less), it is best to watch them all in as little time as you can.   I'm not saying to binge watch them all at the same time, but if you have not yet seen the show and have access to watching it I would definitely recommend doing three or four episodes at a time so you can kind of find the groove within it.   I think the lack of anything else to watch by myself at the time is what made me go from the first to the third episode on the same night, but had I only watched the first episode I'm not sure if I would have gone back to "Superstore" or not.

Already having been picked up for a second season will mean more comedy goodness but it will also give the characters and stories a chance to develop.    At the end of the first season when the store manager was fired the rest of the employees staged a walkout and were soon all let go themselves as well and that's going to be as nice a place as any to pick up on next season.    And I think that's what this show is really about and how people can relate to it because even if you've never worked in retail before (And I have, so a lot of the jokes in here are rather personal for me) you probably have co-workers and if not, well, I'll go back to my earlier reference to "Taxi" and admit I've never even so much as been inside a taxi cab before but that is still one of my all-time favorite shows.