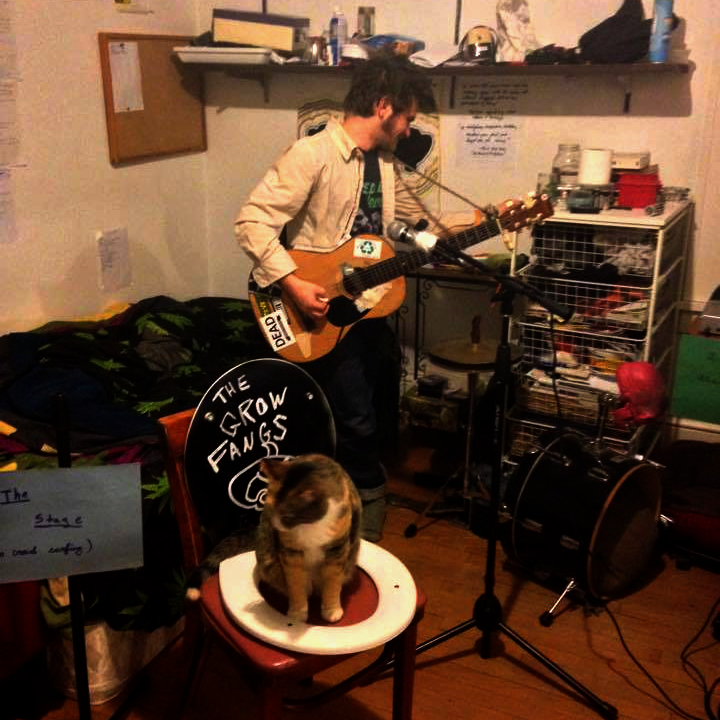 After listening to two different cassettes by The Grow Fangs I immediately recognized the name when searching Bandcamp for recent folk punk releases.   So the singer/frontman type guy from The Grow Fangs took the two guys from Funn Folk Sounds into his bedroom and played these songs for them with an acoustic guitar.    I'm not sure how much of this was "I have a song in my heart and I need to get it out" and how much was improvised on the spot, but I like to think of it as a nice combination of both.

Over these twelve tracks we spend thirteen minutes listening to names dropped such as Charles Bukowski and Ben Weasel, as well as such sing along choruses as "Pizza Hut tastes like butt".    One song actually just says "Yeah!" and is a second long.    That might not be the type of thing you want to listen to and that's fine because I don't really think of this as a "proper release" in the sense that if you'd never heard The Grow Fangs before I wouldn't start by listening to this collection of songs first.  (Though that also isn't to imply I wouldn't want hearing this on cassette, if you can get through the double negatives there)

"Flippin' Out Right Now" is raw and unfiltered.   It is a reminder of the times that we live in because you can just go into your bedroom, record something and then put it on Bandcamp for people to hear.   When I was in my teens I could record music using a karaoke machine, oddly enough, but it went to cassette and I couldn't let other people hear it without giving them a cassette so it's nice to know music can spread this way now and in a lot of ways I wish we always had this technology so other artists in the past could have made something similar to this.