It's been quite a while since I've purchased anything physical from Ring of Honor and that, of course, is going back to the days of when Gabe was booking it.    I'm kind of surprised I haven't even bought so much as a DVD from them since then but it is what it is I suppose.   So when I got the email from RIng of Honor that they were having a sale on autographed items and I saw this baseball I knew I had to have it.   The fact that it was 30% off and regularly priced at $29.99 basically paid for shipping as it came out to about $30 in total.    I'm a huge fan of baseball and collectibles in that sense so this just seemed like something I would have to add to my collection.

One thing that I liked when ordering this is that on the website they give you a list of names of the wrestlers who have signed the ball.   I thought it was a great piece to commemorate the event (even if I wasn't there in person) and also get a number of autographs at one time, such as from Jay Lethal, Trent Beretta, Frankie Kazarian, Adam Cole and others.   To order an 8x10 autographed is usually about $15 and if you should happen to go to an autograph signing to meet one of these wrestlers I feel like they'd charge you a minimum of $10 to sign an 8x10, so I figured at least three autographs paid for this ball and they had more than three names listed.     However, I didn't realize that the description said "included but not limited to" as when I got the baseball it was definitely full of more names than just those listed on the site.   So, yes, bonus autographs are always a plus.

There are only two things which I don't like about this baseball but they aren't deciding factors as to whether or not you should order it.    For one, they tell you on the website that this is a limited edition baseball.   Obviously, to get all of these people together and to make the actual baseball with the ROH logo on it and all-- they don't have an endless supply, let's say.   But it would just be nice to know what it is an edition of, in terms of how many out there actually exist.   Is it 100?  Is it 500?  I mean, I'm not going to complain either way because it's not like "Oh, well, if 10,000 of these exist then they shouldn't cost $30!"  It's not that I even think *that* many exist, but there is no number high enough to make me feel like $30 is too much to pay for this.   If anything, I feel like $30 is a great deal and I just want to know the number for the sake of curiosity.

My second and only other problem with this was that it was shipped in a padded envelope.   Not the bubble mailer, but the one that has garbage inside of it that I dislike so much.   But, yeah, it was just kind of hanging out in the envelope with a paper as a receipt of sorts.   I expected maybe it to be in a box or shipped in a box and have some sort of packaging to protect it, even though it is a baseball and is rather tough.   But they did little to nothing to protect the signatures and that kind of bothered me.   I've purchased baseballs from eBay which were not autographed and the seller still sent them inside a little plastic bag and then inside a small box as well.   I just felt like the signatures could have been smudged the way they shipped it and luckily for me they were not.    You know, this is a collectible item, Ring of Honor, and perhaps you should start treating it as such in your shipping methods.

If you were to look at the names of those who signed this baseball or even just the total number of them you would find this to be worth more than the asking price.   Should you try to collect all of these signatures on 8x10 photos, posters, DVD artwork, action figures, trading cards or whatever have you, then you will spend more on the signatures themselves not withstanding the price of the item than you would on this baseball.   Oh, and um, yeah, you get all of these signatures on an ROH baseball.   As someone who collects autographed baseballs this is pretty cool.   And it's not like you just go up to a wrestler one day and have them sign a baseball either-- it is specific to an event and all of that.    And I know that TNA has done these events at baseball stadiums as well, and if they released something similar I'd likely buy it as well, but the fact that Ring of Honor had the creative mind to put this together really impresses me and, yeah, I'm in love with this baseball.

Look at it this way: if WWE put together a group of talent from Wrestlemania and got them to sign an official Wrestlemania 32 baseball with the WM32 logo on it or whatever, it would certainly cost much more than $30 but it also wouldn't have the same meaning as this because it's not like WWE has that same baseball stadium connection as this baseball does for Ring of Honor.    Additionally, if Ring of Honor (or any wrestling promotion) held an event inside a football stadium or hockey arena or what not and had their wrestlers sign a football, hockey stick, soccer ball, basketball, etc. it just wouldn't have the same feeling for me as this does because I'm all about the baseballs.    So when you have those two factors clicking in such a way it's why when I saw that this was on sale (which was in fact my introduction to realizing this item existed in the first place) I did not hesitate to purchase it right away.   If you're a fan of professional wrestling and baseball then I suggest you do the same.   And even if you're just a Ring of Honor fan then this is somewhat *must own* because you pay $3 for a case and have it on display forever.    Now to wait for the next sale so I can order the DVD to go with this. 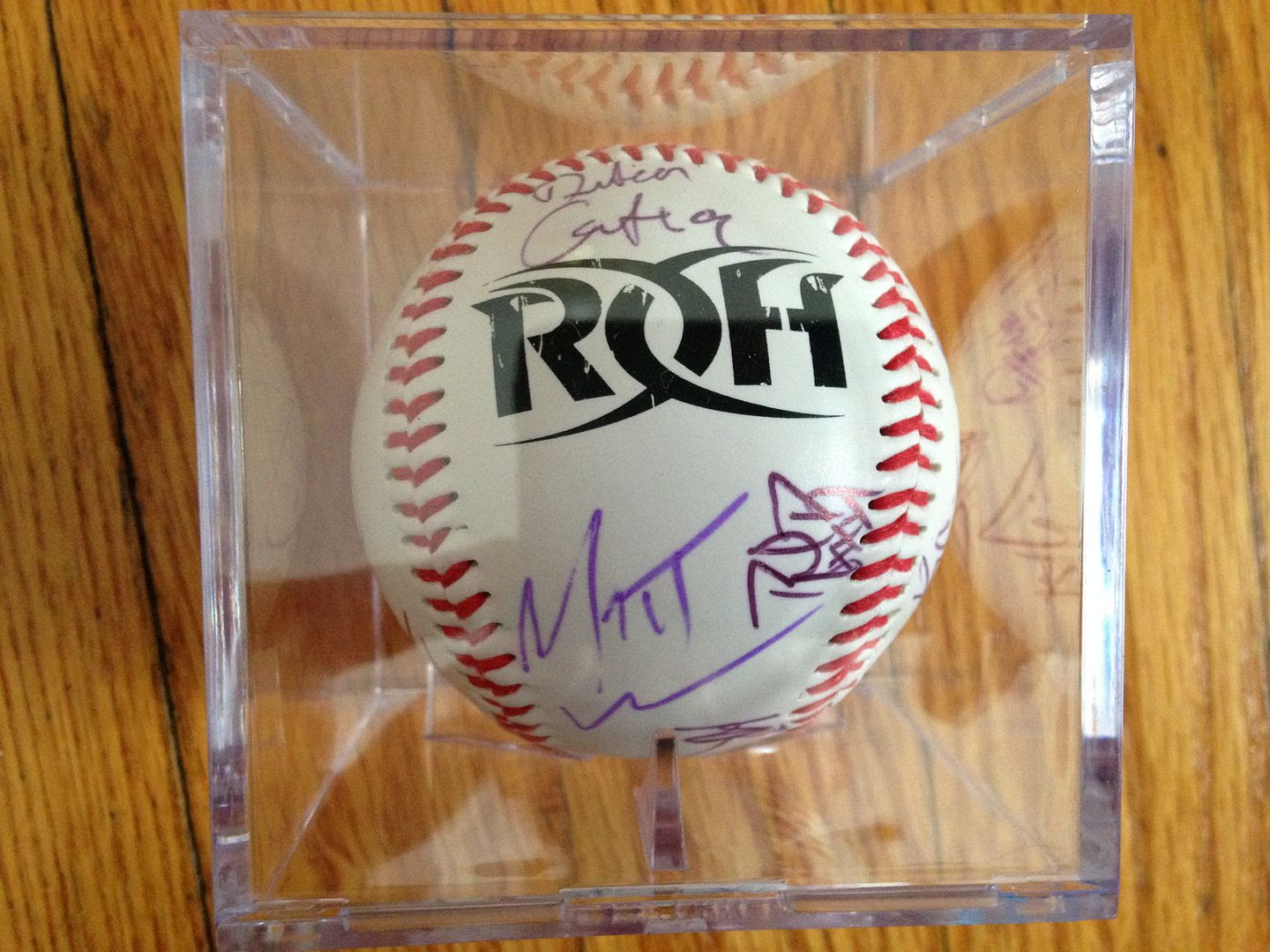 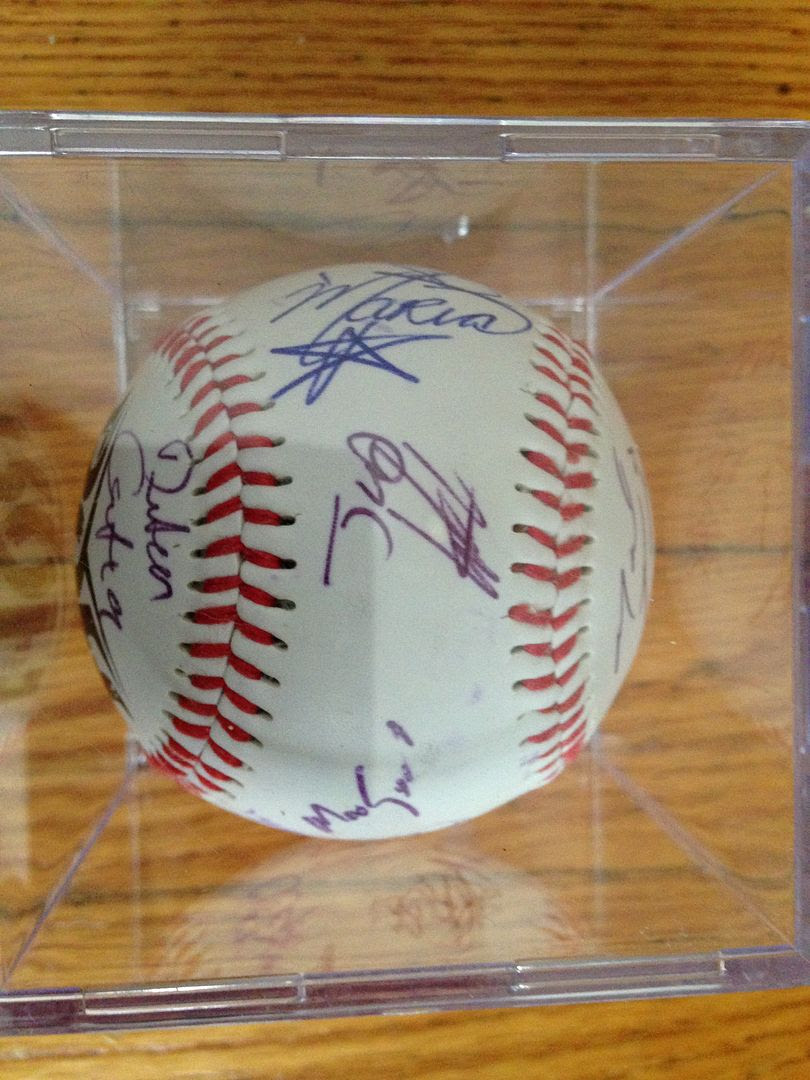 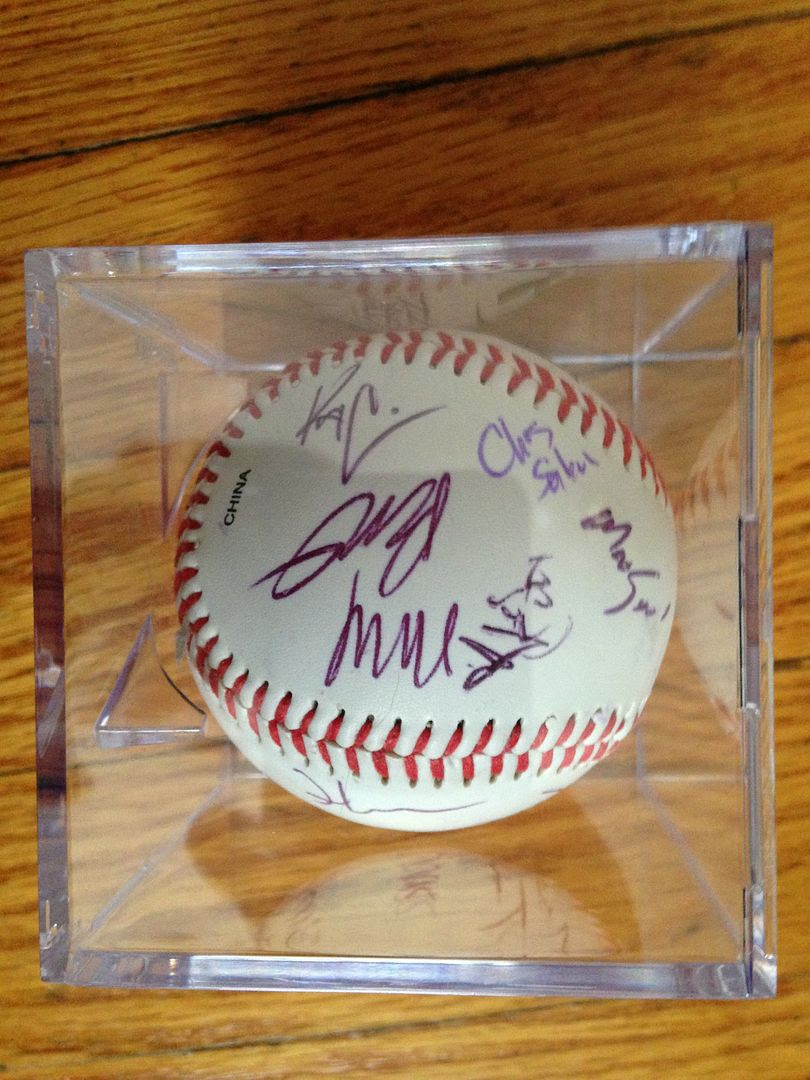 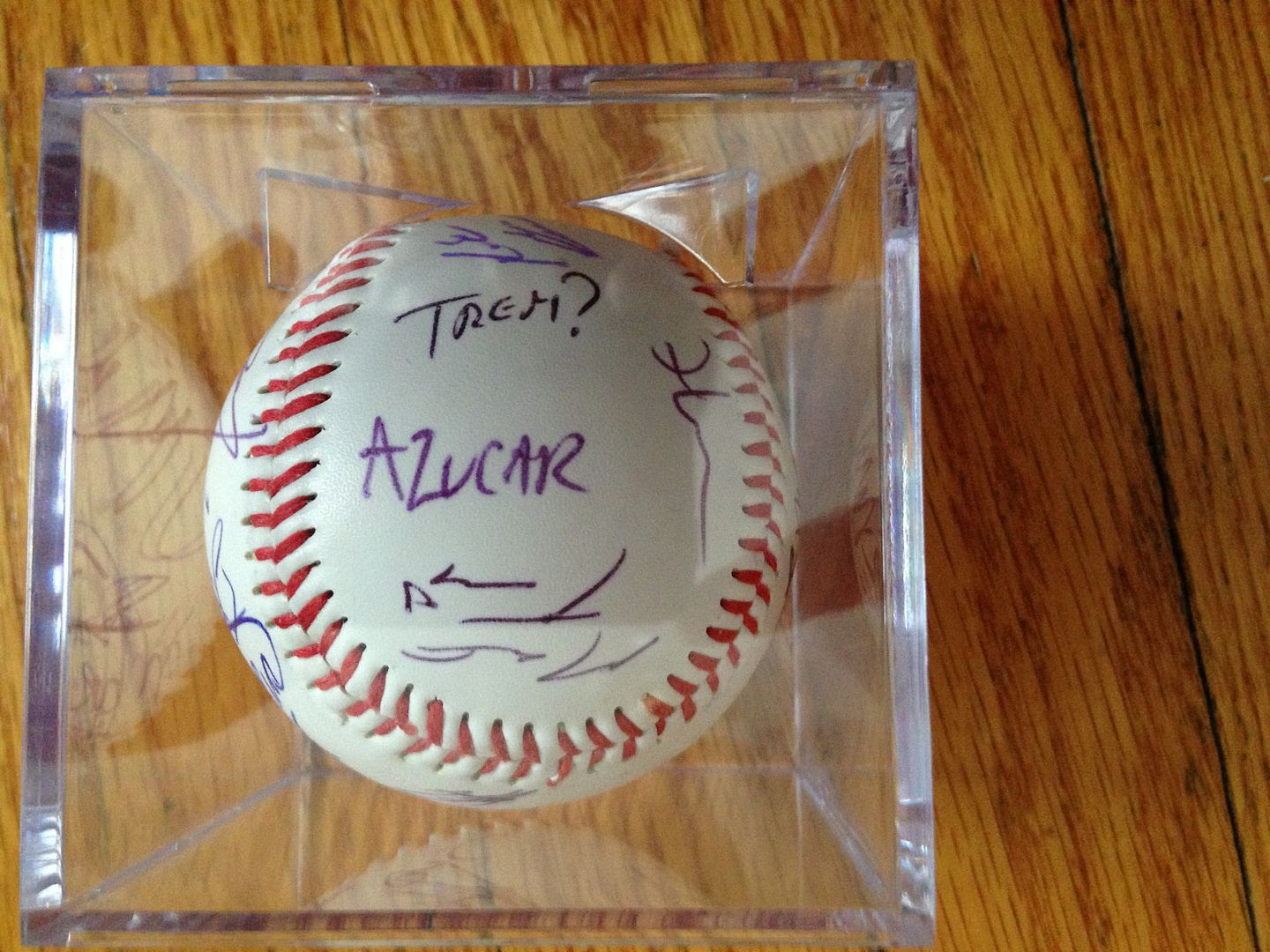 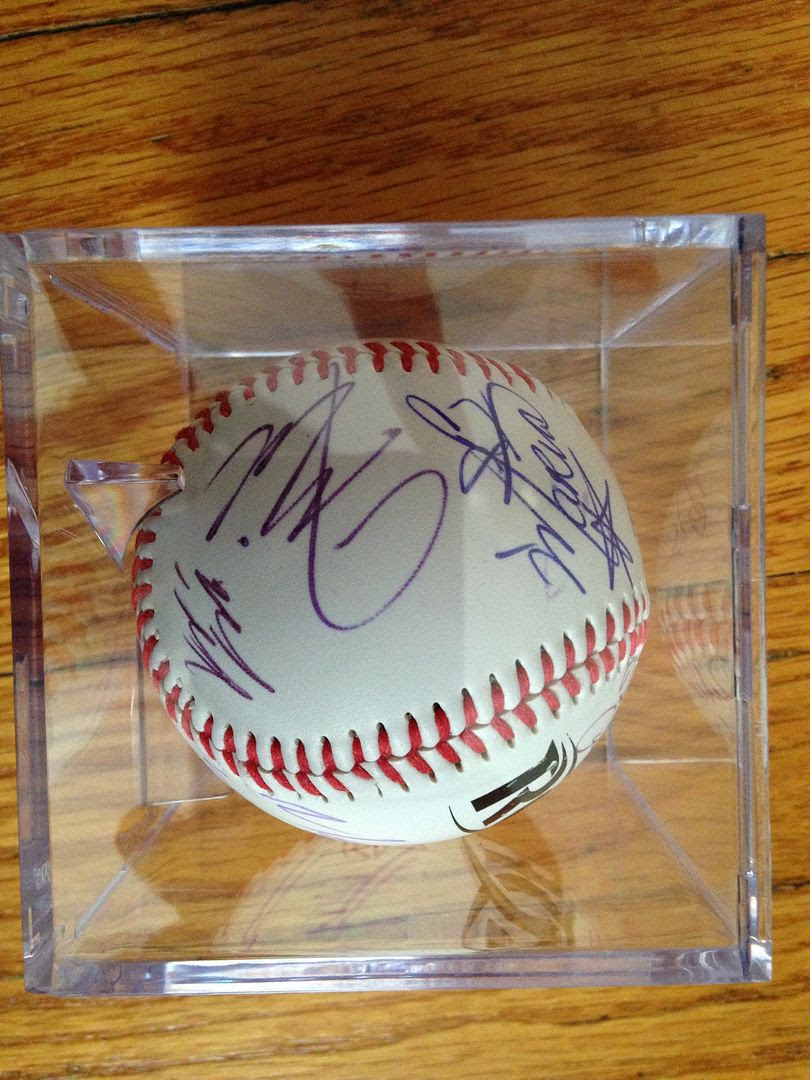 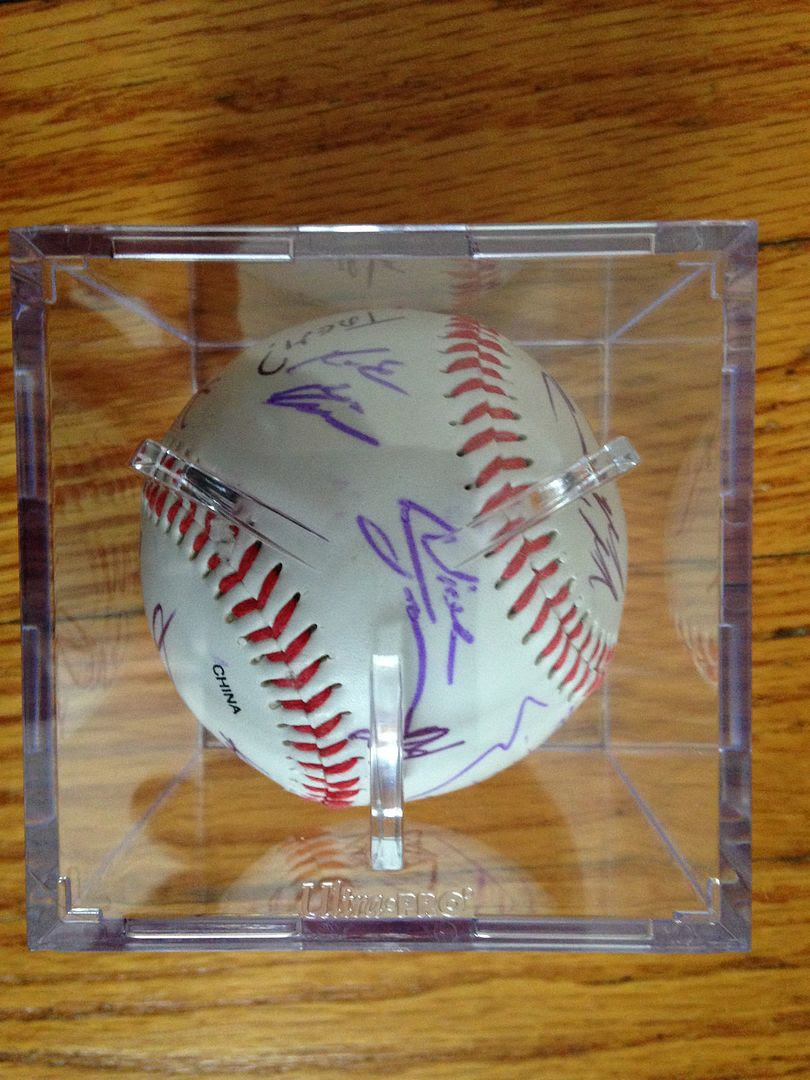 Posted by Joshua Macala at 5:35 AM