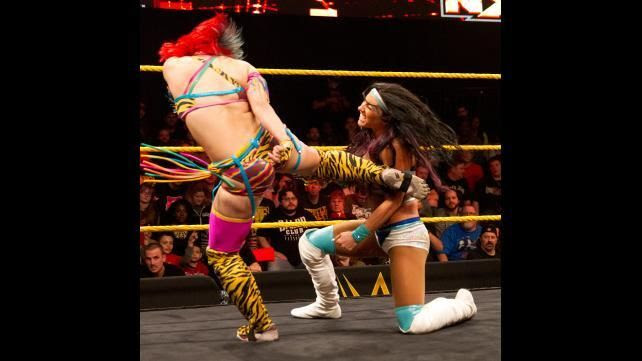 Before I begin this week's review of wrestling it pains me to know that Axl Rotten has died.   I saw him wrestle many times in person as part of ECW and he will be missed.   I don't want to sound cliche but he truly was one of the last of a dying breed.


I actually ended last week with ROH TV # 227 but I'm going to write about it now mainly because I waited until after the long Royal Rumble rant I did.   On this episode we saw Brian Fury win a Top Prospect Tournament match, Cedric Alexander further his feud with Jonathan Gresham and Nigel McGuinness announce the main event of the 14th Anniversary Show with Jay Lethal defending the ROH Title against Adam Cole and Kyle O'Reilly in a triple threat match.   This was all fine and well but they kept building to the main event of Jay Briscoe vs. Michael Elgin and how it would be the first time since these two men went one on one since blah blah blah... Jay Briscoe's undefeated streak as Champion... And all of that... Only to add Moose to the match.   Makes sense.    I'm not really one to be cynical about ROH but the only good thing that came out of this show was the announcement at the end of Elgin & Tanahashi vs. the Briscoes at the 14th Anniversary Show.

I watched pretty much everything else before the next episode of ROH TV but I'll still type about it now as I'm in that ROH zone.   Episode # 228 opened with Roderick Strong defending the TV TItle against MASADA.   For those who don't know, MASADA has been in a lot of death matches and to see him come out first in this episode of ROH was a bit of a surprise.    I also like how they teased the match getting hardcore several times but never actually did it and Roderick Strong just won using his pure wrestling skill.   This also would further the feud between Strong and Bobby Fish, who I expect to face each other at the 14th Anniversary Show.

In another Top Prospect Tournament Match Colby Corino, son of Steve Corino, lost to someone called Punisher Martinez who looked like a bad CAW version of The Punisher, you know, one you could make in a WWE video game but only get so far with because of copyright infringement.    After the match BJ Whitmer attacked Colby Corino and then under the mask of Mr. Wrestling 3, Steve eventually helped his son to the back.   Two points here:  First off, this made the Top Prospect Tournament seem a bit pointless because you know that even though Colby Corino lost his match he's not leaving ROH.    Second, I tweeted Steve Corino and said his son shouldn't be named after cheese and he replied and said "Dumb", so at least I got Steve Corino to tweet to me out of this whole mess.

In the main event it was reDragon defeating Jay Lethal and Adam Cole.   It was as good of a match as it could have been considering that I don't really like matches like this.   When we know Jay Lethal is defending his title against Adam Cole (and Kyle O'Reilly) at the next PPV, what is the motivation for Lethal and Cole to work together?   It just seems so forced and wrong.    But it was some good wrestling at least.


The week in WWE started for me with Raw and that didn't really go so well.   It was a lackluster show only really highlighted by the fact that a) Dean Ambrose got in the face of Brock Lesnar and b) AJ Styles was a guest on Miz TV which set up a match for them on Smack Down!.     If we're truly on the Road to Wrestlemania why does it feel like we've stalled so much?   And, no, for the record, Smack Down! didn't offer up much more than that advertised AJ Styles vs. The Miz match which unfortunately had The Miz in it.


Right now the best WWE show to me is Main Event, which saw the Usos + Prime Time Players vs. The Ascension, Stardust & Tyler Breeze, Jack Swagger vs. Fandango and Naomi + Tamina vs. Natalya + Paige.    If Jack Swagger put his hand on his heart and said "We the people" as a heel and he's a face now, why does he still do it?   Just wondering...


WWE also showcased some of their best talent during NXT this week.     The Vaudevillains defeated The Hype Bros, Carmella defeated Emma and even Enzo and Big Cass defeated some unnamed jobbers.    The match of the night though came from Asuka vs. Santana, who I recognize from SHINE.   Apparently Asuka is so stiff with her kicks the women of NXT and WWE don't know how to take them so they had to bring in someone who could.   Hey, I'm all for it.    Finn Balor and Apollo Crews also had a good main event match.     It was just another solid week of NXT while the main roster felt like it was slowly going nowhere.


Speaking of going nowhere, on Impact Wrestling Matt Hardy challenged Kurt Angle, there was a hardcore brawl and, well, all of the matches and everything on television couldn't distract me from the fact that TNA released Awesome Kong.    Why?   Well, Kong allegedly threw the belongings of Reby Sky out of the women's locker room and may or may not have had a physical altercation with her because of it.   Kong is a veteran not just in professional wrestling but in TNA.   If Matt Hardy wasn't champion and married to Reby Sky you could bet no one would bat an eyelash at this except to maybe show Reby some respect.   Reby hasn't even wrestled in TNA yet, has she?   So why does she want to dress with the wrestlers?   But still, that is something you have to earn and I am siding with Awesome Kong on this one.    But it seems like "TNA" and "pointless release" go together a lot these days, huh?

Oh, and Trevor Lee became the new X Division Champion.    Gregory "Shane" Helms said he was going to get in the ring eventually just not yet.   I'm not sure how that relationship makes sense, but now Trevor Lee is posting photos with the belt like "Suck it, naysayers" but I've never read anyone say anything bad about him.


Following Impact we watched Lucha Underground which is slowly taking off in its second season.    I kind of wish Johnny Mundo didn't come back, but the debut of PJ Black does interest me because he seems like a good fit for the other high-flyers.    Losing to The Mack isn't a big deal either since Lucha Underground doesn't always seem to follow the same playbook as everyone else (See Chapter: "You Must Win Your Debut Match")    Following a tag team main event we saw Rey Mysterio so the question now is just how soon it will be until he is in the ring for Lucha Underground.      I'm more excited for the future of Lucha Underground than I am for these first two episodes of the new season though.   For real.    They don't really seem to be going anywhere yet.  (And Mundo-Cage doesn't count)


Well, Bull Dempsey left NXT with a few others and that's pretty much how I'll end out this week.   I always thought once Bull lost his push on that winning streak when he eventually faced Baron Corbin it was a place where he needed a huge gimmick overhaul.   I still think he could have done well as a monster in a tag team with either Baron Corbin or Rhyno and have them managed by Paul Heyman.     But perhaps Bull will find success in Japan since I assume that is where he is heading.   I wish that is where I was heading but I'm just simply going to eat lunch.

Posted by Joshua Macala at 5:35 AM