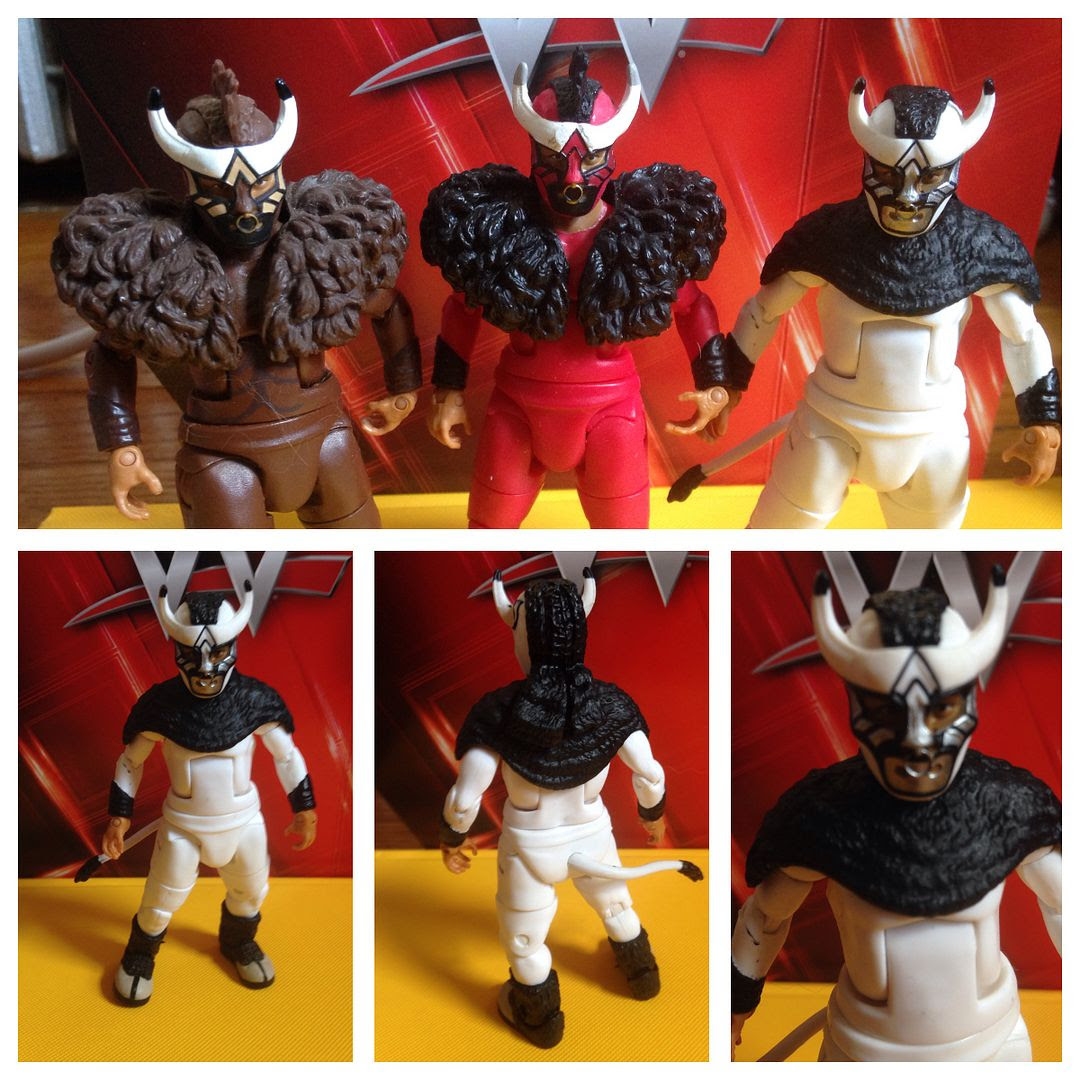 [Editor's Note: While putting together the photos for this review I did notice his collar is different from the previous two releases, something I did not state in here.]

While El Torito might not seem like he is on WWE televison a lot, someone at Mattel decided that they had this body mold made for him and so they were going to use it.    When the first El Torito figure came out he was in brown and it was a singles release (which was also later re-released in a 3 pack at Kmart) and his second figure came in a two pack with Hornswoggle, which was red.    I kind of wanted the second El Torito figure to be in white but since it wasn't I was glad that we then saw a prototype for a white version of him, which became this.

There isn't much to say about this figure because he is just a white repaint of the previous two versions of himself.    I can tell you right now though that there are only a handful of action figures I own more than one of in the WWE Mattel line.    For instance, we have two different versions of Alberto Del Rio and Rey Mysterio... Two Stings now and two versions of Seth Rollins... Two versions of Kane not counting the Create-A-Wrestler (which I also didn't count for Rollins)... But the only figure I can think of off hand that we have three of is Dean Ambrose, because we have the original Shield versions of him as both an Elite and Basic (We got the Basic because it was in the Battle Pack with Seth Rollins and we only have Rollins as a Basic for his Shield gear) and then the new E36 version.    We also have two Dolph Zigglers (both bought at Savers at different times), but isn't it weird to think the only figures we have three of are Dean Ambrose and El Torito?  I feel like based on that knowledge WWE should make them tag team champs or something.

In any case, I'm not sure whether or not I'd buy another El Torito after this.   I enjoy the red version because I never had Hornswoggle before that and like the weapons they came with, but if I see another El Torito as a singles release in a different color I might pass on it.   And what color would it have to be anyway?   Black?  Wasn't there a blue El Torito once?   There is also a version of El Torito in white where he has his chest and abs drawn on his suit but that wouldn't be enough for me to buy a new figure of him (And he did fight once without that deco, so this figure is accurate)  Either way, this should be one of our last El Torito figures and, really, I'm just kind of surprised we got this many versions of him but am totally glad that we did.