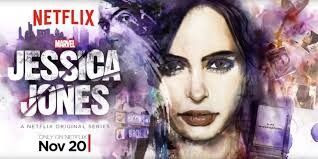 I feel like I started watching "Jessica Jones" after a lot of other people had already finished binge watching it.   I actually read the comic book once because when we lived in Houston- and this was pretty early on, so we're talking maybe ten years or more ago- I saw it at Bedrock City and thought it was about the Jennifer Garner spy show.   When I realized it wasn't I was upset until I actually saw the fractured art and read the story which was just like anything I'd ever experienced from a comic book before.

As a series it doesn't matter whether or not you've read a single comic book in your life: Jessica Jones is the perfect story, pitting bad against evil and it has everything you could want while watching it.    Jessica Jones is the main character, a mutant of sorts with special powers, though she doesn't really use them and instead is trying to go legit as a private investigator.   And, yes, that makes it as much like a pulp story as you might think.   Now this is because someone named Killgrave (Played by the only Doctor Who I like) can control people and he used to control her once which was rather dangerous.

Most of the series is spent trying to catch and kill, um, Killgrave and the characters seem to come and go as those who are alive around Jessica Jones tend to not be for very long.   I'm just saying- don't get attached to anyone in this series.    But Luke Cage is in here and I am happy for that, for his eventual Netflix series and for the fact that "Daredevil" is returning for Season 2 soon as well.
If you're not on this Marvel Netflix original series train then I'm not sure what to tell you.   This is all building towards something, obviously, much like the Avengers did with their movies, but even if you were just a fan of Krysten Ritter or liked shows about detectives this could have that stand alone quality that has you watching it because it's just one of the best shows I have ever seen.

Posted by Joshua Macala at 4:58 AM