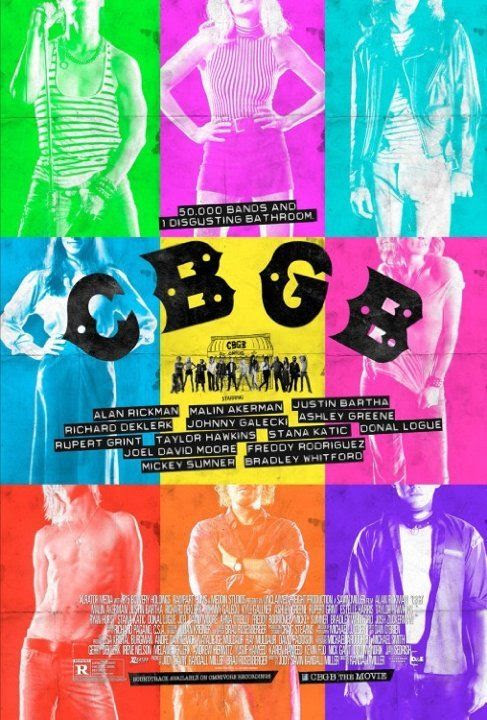 When I watched this movie I never really thought about it being one of Alan Rickman's final films but you have to appreciate his role in it given that it was.   I can't think of another movie like this, where Alan Rickman is the star but the movie isn't really about him.   People aren't going to watch this movie to see the guy who opened CBGB but rather to hear the music, see the bands and all of that.   It's like people are more concerned with who is playing which Ramone than Alan Rickman being involved, you know.    It's like having a movie about The Beatles with Alan Rickman as the star but he isn't playing any of the fab four.

This movie goes out of its way to transition through comic book panels and I do like that about it.    There is also this sense of informing the viewer of every character by having the name written on the screen and I think for the younger viewers that is good as well.   I mean, with Iggy Pop, Blondie, Talking Heads, Dead Boys, Television, Ramones, Police and maybe some others (Who did I forget? Patti Smith?) among the cast how could this have a bad soundtrack?  You have to at least enjoy the music side of it if nothing else, though it does have a nice little story to it.

I'm not sure if I'd watch this movie again but I don't know if it was made for me.   I imagine this movie being made for that awkward teenage kid who isn't sure what's going on in their life but they know that they like Harry Potter and Ron Weasley is in here so they're going to check it out.    Then they start thinking "Did that really happen?  That can't be true!" and since this kid likes Harry Potter of course it's off to the books for the facts.   So while someone is doing all of this research in ways you know it's going to be difficult to avoid the music.

And so I think that's what this music is: not so much a documentary or something to please people of my age- people who lived a short train ride away from CBGB when it was still around and have read about the music through books like "Please Kill Me"- but rather for those youngsters who need something to somehow get them into what punk rock is really all about and not this Hot Topic shit.