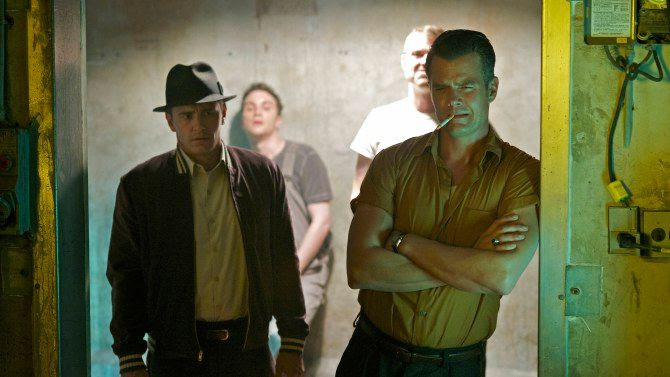 In the second episode, which is only about an hour, Jake spends his time trying to save someone from being murdered by their father.    It's an interesting little story with its twists and turns but Jake eventually does manage to do what he set forth to do in the end.    It's an interesting look just at how life was back then and how different it is now with technology.

Now throughout this story there is a character in the background- a boy- who is convinced that the man Jake wants to kill has killed his sister or something and so he's always kind of poking around and in the end he tries to stop Jake and then finds a scrap of paper from the future and so now it would appear as if when we are left at the end of this episode that Jake is going back onto his saving JFK path.

This really felt like a rookie mistake to me by Jake though.   It was raining outside- downpouring pretty hard- and he's so worried about having a little bit of blood on his hands that he stops to wash it off under a faucet outside and, well, that's when he gets caught by the boy (Though he isn't really a boy I guess, since he works at a bar and all)  If ol' Jakey had just waited until he got back to the present to wash his hands, well, then this one would be over.

As of right now- and I watched the first episode on a Sunday and the second on the Monday it premiered- I kind of feel like whatever you do in the past isn't going to matter.  I mean, when something happens it's for a reason, you know.   If you went back and, say, stopped the assassination of Dr. Martin Luther King Jr then it doesn't mean that there wouldn't be any racism in the United States today.  Furthermore, what if he just instead gets assassinated a few months later?

I believe that time is a straight line and it's not something you can go back to in the way this show wants you to believe you can.   It's like having a glass of water and dumping out the water.  Yes, you can pour new water into that glass but once that other water is gone it's gone.  (And don't start about how you can get the same water back somehow because all of the earth is connected in some way or we might have to build a time machine together)   But I am interested in seeing where this mini-series takes us and if they do prevent JFK from being killed what happens from there.