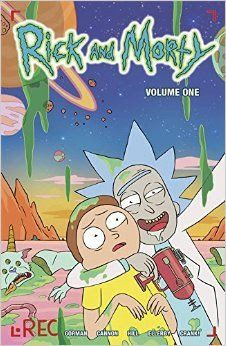 While I've really started getting into comic books again in 2016, it is worth noting that I've recently read comic books about characters from animated shows and while a lot of what was said in those reviews applies here, this is Rick and Morty.   If you're not watching Rick and Morty I don't know what to tell you, but Rick and Morty is one of the single best things going today.   If I had never read a comic book before and thought that they were for nerds and whatever would keep me away from reading them-- I would still read them for further adventures of Rick and Morty.

So, who wants to see Rick die in an alternate universe?

A lot of comic books I've read recently based upon animated shows haven't really had story arcs and have just been an issue-by-issue thing, sometimes even breaking down into more than one story per issue.   But for this collection of Rick and Morty issues there is a story arc and in that sense you want to read to the next issue to experience it all.    It's pretty much like the television show though only on paper instead of your television or however you watch Rick and Morty normally.

I like that this introduces characters we might not otherwise see and also makes good use of characters we already know and love like Scary Terry.   I also like that in the word bubbles they put in sounds for Rick not only burping but also drinking in between thoughts.   I sometimes watch Rick and Morty so much that I feel like I've started pausing in between words when I speak, as if to mimic Rick.

If you only read one comic book based upon an animated series, I totally think it should be Rick and Morty.   But, you should totally read as many comic books and watch as many cartoons as you can.