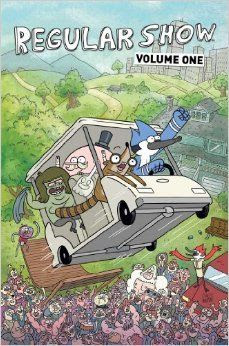 I think at one point in time I had forgotten that I even owned this comic book collection.   I remember when "Adventure Time" first came out as a comic book I was so excited.   Then I got out of comic books for a bit and, well, one day at Walmart I saw this and since it was less than cover price because that's how all books at Walmart are I decided to pick it up.   It ended up on a shelf with some other comic books and I only remembered about it recently though it feels like I've had it for years.

I was actually on the Midtown Comics app when I was looking up something and I started browsing a sale and saw that Regular Show was up to Volume 5 or something like that and it struck me as "Oh yeah, I do have that first one that I never read, don't I?"   Regular Show is something that I liked from Cartoon Network the first time that I saw it and it kind of has been with me since "Adventure Time" in that way.   There are a few other shows on Cartoon Network from the same time, maybe a little later, and I'm just starting to get into "Steven Universe" now but haven't tried "Uncle Grandpa" yet really.

A lot of what I said in my review of "Bob's Burgers" can apply here.   When you have a show which is already animated putting into comic book form just seems to work.   You can give other people not only the opportunity to write stories for these characters (A lot of which here involve Muscle Man getting everyone into trouble somehow) but also the chance to have their own take on drawing them and I just love that.    Is it any wonder that the majority of comic books I read are based upon animated series that I love?  You can hear the characters voices in your head as you read it.

Now unlike "Bob's Burgers" though, these stories found within here actually could be episodes of the animated series.   From a moshpit where a moshpit should not be to staying up all night to a bad haircut these are things which I would expect to see in the show.   It's funny because I own all of the seasons of "Adventure Time" on DVD but not "Regular Show" and though I don't want to compare the two it's difficult for me to decide which one I do indeed like more.    I have various issues of "Adventure Time" as a comic book but should get into the TPBs of them one day as well.   Still, until that all happens one day, I suppose I'm just going to focus on "Adventure Time" as a show and Regular Show as a comic book though, of course, I'll be into both of them in every form I possibly can because they're two of my favorites.