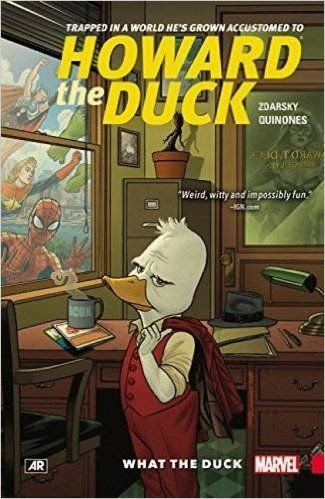 When I found out about this comic book series I purchased a few of the issues at half price from Newbury Comics.   I even wrote a review of the first issue.    My plan was to buy the other issues from Midtown Comics online to fill in the holes I had but then while at Barnes and Noble I noticed that the Marvel and DC graphic novels were buy two get one free.   So in order to take part in that sale (um, twice) I picked up what was the last copy of this at the time.

I will read just about anything which involves Howard the Duck.   For me, Howard the Duck needs his own movie or animated series.    I'm not one to throw out all of these theories about what comic book people should do, but to have Howard the Duck appear in "Guardians of the Galaxy 2" in a larger role and then branch off into his own film would be great.   I would even just love to see a Howard the Duck-Rocket Raccoon team up movie.

Regardless of what happens (and I'd like some more Howard the Duck toys please) this is a fun collection of the first five issues of the new Howard the Duck.   I re-read the first issue and then read numbers 2 and 3 one night and then finished with 4 and 5 the next night.   Though Howard meets a character named Tara, he has adventures with The Collector, Rocket Raccoon, Spider-Man, Human Torch, Dr. Strange and just a host of others in the Marvel Universe who you feel would be connected to those already mentioned (So, yes, the rest of the Guardians of the Galaxy as well)

The stories are a lot of fun and many reference other issues from up to thirty years ago or more and that makes me want to search for such issues just to read these little pieces in the Howard the Duck timeline.   I also am going to possibly track down the Run The Jewels variant cover to frame and put on my wall.    This is a decent amount of branching out from here and also a note of another volume coming out so that just makes me happy.

I'm not sure what makes Howard the Duck one of my favorite Marvel characters but ever since I saw the George Lucas movie about him as a kid I've always been somehow drawn to him.   This collection of comic books though isn't just for fans of Howard the Duck as the writing is full of mystery (because after all, Howard is a detective), action and humor.   It's everything you could want in any story and if you are not a fan of Howard the Duck then this could make you one.