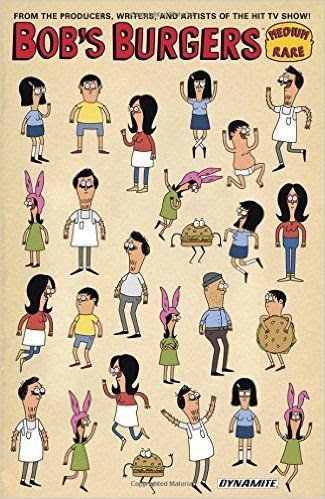 Finding out that there was a comic book for "Bob's Burgers" made me excited because it is one of my favorite shows.   However, what makes Bob's Burgers so great as a show isn't what makes this collection of stories so amazing.   Rather than being a story about Bob himself and his restaurant with subplots about the kids, these are strictly stories about the kids themselves and each issue contains three stories: one from each child.    Tina has her sort of fan fiction while Louise has more of mysteries which are sometimes exaggerated and Gene has rhyming stories which could be songs.

I will find just about anything related to Bob's Burgers and explore it.   I have a Bob's Burgers t-shirt and am strongly considering buying their Pop Vinyl figures from Funko.   In fact, while looking up details for this I found a Mad Libs book on Amazon I kind of want now as well.   But I can see why this might not be for everyone.    If you watch the show really just because you watch the other shows at the same time on Fox then you're definitely not going to like this.   I guess it just takes a certain amount of dedication to Bob's Burgers as a brand to enjoy this comic book but I do feel as if there is an audience for it.

I purchased this for half price from Midtown Comics (such a great place) and if you can find it for whatever price I'd highly recommend reading it if you're in love with Bob's Burgers.    It's one of those fun things though because Bob's Burgers is already a cartoon so sometimes the characters look how they do on television and sometimes they get a slightly different interpretation and I just love that about it-- that such mediums can be crossed in such ways.    The parents aren't actually in here a lot either and I kind of enjoy that this is about the kids more than anything else.   One day, when Quentin is old enough, he will read this and I am sure he will find it most fascinating.