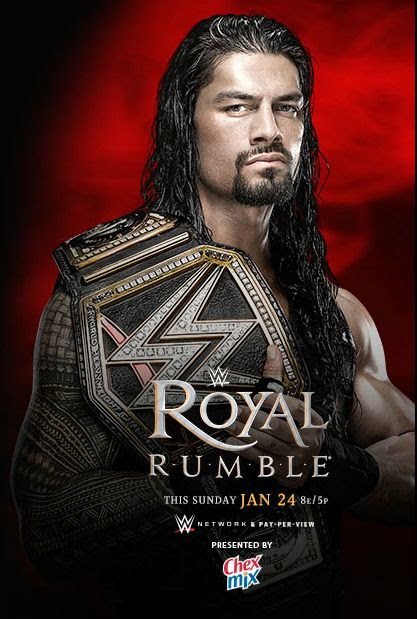 It's that time of year again where I like to think I'm going to write predictions for every WWE PPV and then some time after Wrestlemania I abandon the idea.    Sometimes it's hard to write about these things before the events because it can come up on a Sunday when I haven't even watched that week's episode of Raw yet and so I'll watch the PPV a day or two after it's officially been on live and, yeah, once we get into the lesser PPVs it becomes even more difficult but I shall try.

As I have done in the past (I think) instead of predicting the Rumble match itself by saying "Well, this guy will be eliminated first by this other guy here" and naming off all 30 entrants, including surprise entrants, I'm going to simply give you some different theories as to who could win and how it could shake up things in WWE, which desperately needs to happen right now.

So, as they say in the biz, onto the show!

I don't see why The Usos would win this match.   If anyone is going to take the titles from New Day (and I have yet to see the tag team which should do it on the main roster) it should be at Wrestlemania.   I feel like this is just a way to fill out the card and take up some time.    It could be a decent match, but is anyone really watching this for anything other than the main event?

Becky Lynch really is the least relevant of all the WWE divas.   Paige is apparently injured and so we get this instead of Charlotte defending against Sasha Banks or anyone else for whatever reason.   Could Becky Lynch be sent back down to NXT?  I really don't want to see her back down there, but she really needs to find a new alliance since she's on her own now and after this loss will likely just get lost in the shuffle.

So Kalisto scored an upset victory over Alberto Del Rio in a non-title match.   This set up a title match which Kalisto won on Raw only to drop the title "days" later on Smack Down in the rematch.   I don't think they're going to switch the title again this soon and let's face it, I don't really see any of the titles changing hands on this show because that can further speculate that the WWE Title will change hands in the Rumble match.    These two could have another match before Wrestlemania.    Any matches they have should be good.  But I expect both of them to be involved in a Money In The Bank match at some point as well.   I don't know, if you gave these guys enough time at Wrestlemania they could steal the show.   But would WWE book it?  At this point, I feel like they kind of have to, but that means we'll likely see some League of Nations tag match at Wrestlemania vs. Jack Swagger, Mark Henry, Kalisto and let's say Dolph Ziggler.     Either way, no new champion likely here.

This match is interesting because I don't know how either man is going to stay down long enough for the Last Man Standing rules.     While I don't really think Kevin Owens could win simply because him having the IC Title doesn't make sense since he will either be in the WWE Title picture or simply facing Brock Lesnar at Wrestlemania, the question is can Dean Ambrose somehow survive this?   Ambrose seems more likely to take the loss here, I'm not going to lie about that, but I'm also just not feeling Owens as winning the IC Title back right now.    Could Brock Lesnar somehow win the Royal Rumble and still face Kevin Owens as IC Champion at Wrestlemania-- champion vs. champion?   That'd certainly be interesting.    But I still like my idea as well of no titles changing hands on the undercard because it makes it feel more like the WWE Title will change hands in the Rumble match.    This, of course, will have Dean Ambrose somehow retaining and, well, I'm just really looking forward to this match more than any other on the undercard, so let's just sit back and watch the fun.

With Seth Rollins injured, Brock Lesnar winning could provide the feel-good moment at Wrestlemania this year that Roman Reigns wanted to have last year.  It wouldn't be difficult to book Brock Lesnar as the winner because the dude is a monster and I think in a lot of ways it's going to be harder to book a way for him to be eliminated, but WWE should have this idea on the table as their number one safe plan because it just works.   Brock Lesnar becomes champion while Roman Reigns spends the time after the Rumble fighting his way into the Wrestlemania main event and it's Brock vs. Roman Part 2.    If nothing else, WWE likes to repeat the past and do so while there is still enough time for us to remember it, so I think this could work somehow.   Also, if Lesnar wins the title here and drops it to Reigns at Wrestlemania then Roman Reigns will become a three time WWE Champion.   Let that sink in for a little bit.

In the event that Brock Lesnar does not win the Royal Rumble he needs a back up plan for what to do at Wrestlemania.    When Kevin Owens debuted in NXT I immediately thought what a great, big money fight it would be to have him against Brock Lesnar.   Now, in interviews leading up to the Rumble and Wrestlemania, even Kevin Owens is saying it himself: Owens vs. Lesnar at Wrestlemania.   We don't need any titles on the line.   The fight will sell itself on the basic fact that it's going to be two people just beating the holy wrestling hell out of each other.    So how does this relate to Dean Ambrose?  See his name up there?  Well, Dean Ambrose and Kevin Owens will be involved in a Last Man Standing match earlier on this card but I fully expect them to still be in the Rumble itself.    So you have to imagine that both of these guys are tired from having fought that previous match.   The commentators can really play up that idea because that's what they like to do.    Wasn't there a Rumble once where Bret Hart won after being injured earlier in the night and coming out on one leg?  Or was that the one where he tied with Luger?   Either way, imagine the last four are Dean Ambrose, Roman Reigns, Kevin Owens and Brock Lesnar.    Lesnar and Owens can over power Reigns and throw him out first, sort of working together to take out The Shield brothers.   But when Owens goes to take out Ambrose it backfires and he somehow knocks out Lesnar instead.   Owens doesn't care though, but the mistake gives Ambrose enough time to regroup and toss out Owens.    Lesnar is obviously upset that Owens cost him the WWE Title and so their match is set for Wrestlemania.    Then we reach this interesting concept with Dean Ambrose finally winning the WWE Championship but also Roman Reigns wanting to fight for it.   This could bring about an Ambrose vs. Reigns Wrestlemania match which could quite possibly have more of a backstory to sell than any other match possibility but it's all about whether or not WWE wants Roman Reigns in the title picture still.

In the event that a similar scenario as above occurs, and we can kind of bet on that Final Four for either of these three predictions, there is a chance that Kevin Owens could come out with his first WWE Championship.    This would be a good way for him to win it because all you have to do is dump a guy over the top rope to win.   No pinfalls, no submissions, etc.   So it's kind of a cheap way to give Kevin Owens his first title reign but I'd still take it.     But then the question is, what do we do from there?  I'd go with my theory that they have an Elimination Chamber to see who challenges for the title at Wrestlemania.   Roman Reigns has Brock Lesnar pinned until HHH makes his return and it's Owens vs. Lesnar for the title at 'Mania with Reigns vs. HHH because why not.

I like to think of this one as the "shock theory" simply because Daniel Bryan very easily could come back, win the Royal Rumble and become WWE Champion.   The roof would easily blow off the place.   And it would also put a lot of ideas about what would happen at Wrestlemania up in the air.    Sure, Roman Reigns could simply face Daniel Bryan, but what about Brock Lesnar?  What about Kevin Owens?  What about all of the WWE wrestlers I would like to see face Daniel Bryan?   It'd be crazy to think of some of the possibilities, but what seems to be happening in WWE right now seems fairly formulaic to the extent that we could see it coming from a mile away.   Daniel Bryan coming back would really shake things up and give that boost of excitement I would need heading into Wrestlemania and with most of the other active roster members injured it would probably be in WWE's best interest to try and bring this man back if he is physically able to compete.

Along with the "shock value" of Daniel Bryan returning comes the idea that AJ Styles finishes up his ROH deal the night before this and as such it is thought that he could be in this match.     Given his history from WCW to TNA to NJPW, just imagine if the first match AJ Styles was part of was the Royal Rumble and he became WWE Champion.   That'd be an even bigger main roster debut than Kevin Owens, who defeated John Cena if you don't recall.    But Styles has that history to back it up-- he's one of the few wrestlers out there right now that does.   Plus, AJ Styles debuting in the Royal Rumble match and winning it along with the WWE Championship would certainly shake things up to the point that I'd even be excited to see him face Roman Reigns at Wrestlemania.   Or Brock Lesnar or any other number of active WWE wrestlers.


Any number of wrestlers could win the Royal Rumble match to make for an interesting Wrestlemania season.  I just feel like the least interesting scenario involves Roman Reigns retaining.   Not having him win two Rumbles in a row is one good reason but also just having him not be able to overcome these odds is something WWE should be considering.    I mean, these are odds which are hard for nearly anyone to overcome and if Roman Reigns cannot overcome them I don't think anyone would blame him.   Plus it's better booking for him to spend the time after the Rumble and up to 'Mania fighting for his spot than proving he can beat all of the odds.   I'm not going to say it for sure, but Roman Reigns entering the Rumble at #1 and winning it would make anything he was faced with after that look rather tame.    For that reason alone he needs to lose and, well, the idea of who could become champion is rather intriguing for me.
Posted by Joshua Macala at 9:21 AM