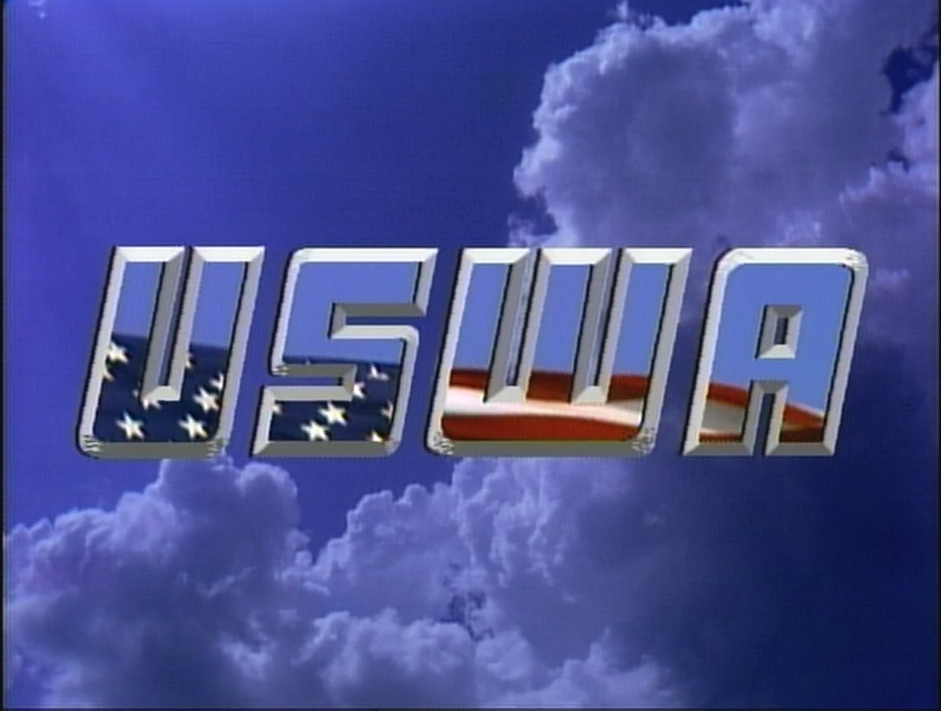 We open with highlights from last week, which was an episode not yet on The WWE Network.   Why wouldn't this be put on The Network from Episode 1 and on?  They really seem to have no idea how to release episodes in any sort of order which makes sense.   We also got the standard WWE Network disclaimer that the views in this don't represent them because this program is being presented in its original format, blah blah blah.

Marc Lowrance makes his introduction as the lead commentator guy and when you search for him on Google you will find that he is a Methodist minister now.   Ronnie P. Gossett comes out as the heel, the Joel Gertner to Joey Styles but in a much worse way, and begins to talk about how he manages Jerry Lawler and the Dirty White Boys and he's bringing them to USWA next week.   So, thus far in the show they have done more to promote last week and next week than their current episode.    Interesting side note: the ring ropes are (from top to bottom) red, yellow and blue.   If this is the USWA and the USA flag is etched in their logo why wouldn't their ring ropes be red, white and blue?

Billy Joe Travis is wearing pink trunks, has hair like Isaac Yankem, DDS and has the face of a long, lost Armstrong brother.    Matt Borne, of course, came to most of his fame as Doink the Clown and though he looks more like "Dr. Death" Steve Williams here he is also wrestling barefoot for some reason.    This is also some kind of tournament match but I'm not really sure what's going on still.    Ronnie P. Gossett stood up at the commentator table and hit Billy Joe Travis with a chain which allowed Matt Borne to make the cover and pin.   Apparently this is some sort of Texas Title Tournament.    Post match, Travis tries to get revenge on Gossett but Terence Garvin and Jerry Lawler come out and everyone is wearing pink.  No, really.   Marc Lowrance tries to make an awkward fat joke as he says this is 3 on 1 unless you count Gossett as two men and then it's 4 on 1.   The way he had to walk us through his math and logic just had it fall so flat it was embarassing.   Lawler works over Travis with a chair and it makes me wonder why they're all wearing pink but still fighting each other.    Just as Marc Lowrance says no one is coming out to help Billy Joe Travis because he doesn't have any friends, Bill Dundee and Jeff Jarrett come running down the "ramp" to make the save.   They clear the ring and while Dundee is in his wrestling attire Jarrett is in a suit not dressed to fight.    Lowrance talks to Bill Dundee as we head to another commercial break, which is funny to see on The Network because if I was WWE I'd throw in some sort of WWE plug even if it wasn't something that'd need constant updating.   Or heck, throw in a classic WWE commercial.   That'd be rad.

This time around they get an official graphic on the screen with both names which I don't recall seeing before the first match.   Lowrance is already talking about how Doink the Clown has advanced to the next round in controversial fashion.   And to think, at a Survivor Series event some years later Jerry Lawler would face Doink the Clown in one of the craziest matches to ever occur at Survivor Series and that is only because of the number of clowns involved.   Kevin Von Erich looks as he normally does.     Lowrance says that Amos Moses is a typical hillbilly type without much education and I'd argue with him but the guy looks like a homeless version of The Sandman.   No, really, if he decided his ring attire should be some ripped up acid washed jeans then he obviously does need some schooling.    Gossett comes back to the commentary table and immediately gets a loud beep over something he says, which I believe was a reference to a professional wrestling magazine and not an actual swear word.   Amos Moses has some pretty awful tattoos and I wonder how Amos Moses got into this tournament.    Gossett confirms my suspicion as he says that Amos Moses isn't even a real wrestler and they just took him from the crowd.   I wouldn't be surprised.    Kevin Von Erich gets the pin rather quickly as Lowrance goes on to state the obvious that if Kevin Von Erich wins the tournament he'd get a title shot against his brother, Kerry.

Back from commercial break and we're into our third match now.    We get an actual graphic like in the previous match.   Skandor Akbar is out as the manager for Austin and that means he's the heel.   Plus, Dundee was opposite Lawler before with the first match, so, yeah, it's pretty clear that Stunning Steve is the heel challenger to the fan favorite champion here.   I really like the outfit Stunning Steve is in and I always wonder why no one has captured this era of Steve Austin in action figure form.   If Mattel is reading this, please give us this USWA era "Stunning" Steve Austin figure.  Please!!  Through some reasons or another, the wrestler in this match who went on to become bigger than Hulk Hogan (That's right, I said it) didn't win and the guy who was mostly known in conversation with Jerry Lawler retained his title.   Whatever.

Some tournament this was.   It lasted all of three matches and less than a half hour.   Shout out to Ronnie P. Gossett for saying he won't be happy until all the Von Erichs are dead.   Bet he came to regret that line years later.    Matt Borne actually won this match, which was more surprising than the brother vs. brother angle I thought they'd go with.    Gossett took the mic and said something to the crowd which was edited (Yup, Gossett was bleeped twice in the same show) only this time I think he did actually say a word that isn't considered PC.    I'm just wondering how the Attitude Era is going to sound on The Network now since I'm pretty sure what Gossett said was the r-word and, well, we all know much, much worse was said during the Attitude Era.


Ah well, this was a fun little show to watch.   A lot of this older footage can once be found on those "early years" DVD compilations found in the dump bins at Walmart, mostly which I remember from Steve Austin, Mick Foley and Jeff Jarrett.   Where is Mick Foley anyway?    He probably should have been in here, but if this keeps up as a regular series (with the episodes in the correct order and they don't skip around a lot, which based on what I saw before watching this I feel like there are going to be HUGE gaps) and if it could have been from Episode 1 to Episode 10 or Episode 20 from the start instead of ten or twenty episodes seemingly thrown on The Network at random... But yeah, I'll still watch it for the wrestling and to wonder "Where is Amos Moses now?"

Posted by Joshua Macala at 7:18 AM