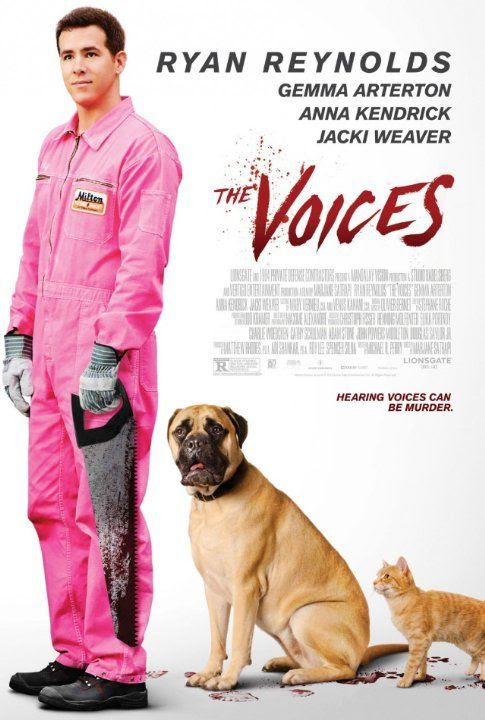 I'm trying to watch more movies in 2016, picking one at random from either the library, Netflix or Hulu to watch on possibly a weekly basis but at the very least on a monthly basis.    I started with "The Voices" because it's from 2014, has Ryan Reynolds in it and the description said that it featured talking pets.   I felt like, though, it wasn't going to be in a "Dr. Doolittle" way, based upon the other ideas the description gave off.    And as this was a somewhat funny movie at times, it was also dark and so you could think of it in that dark comedy way and that's never a bad thing for me to watch.

Ryan Reynolds plays a character named Jerry who has a cat (Mr. Whiskers) and a dog (Bosco) and for reasons which have tramatized him in his childhood he talks to the pets and they talk back.   At least that is to say that he hears them talking back in his head, but really he is supplying their voices himself and so when you see the scenes where someone else outside of the movie magic would it just looks as if Jerry is having a conversation with himself and using different accents.    I did read about how Ryan Reynolds insisted on doing the animal voices himself and I think that is an aspect of this movie which makes it that much better.

So all Ryan Reynolds wants is to be liked and fall in love.   He works in a warehouse but loves Fiona in accounting.   He drives her home one night and is talking about the Angels in Heaven when they hit a deer.   Jerry takes out a knife and ends the life of the deer- seemingly at the request of the deer, but from Fiona's perspective Jerry would have been doing both of the voices.   Fiona gets scared, runs, slips and falls and, well, Jerry, still holding the knife, accidentally stabs her.    This begins a killing spree which I feel like it took a bit long for other people to catch on with at their place of business.   It just felt like the other employees should have been more concerned more quickly and I certainly wouldn't have gone on any dates with anyone else from the office, but you know, the movie had to move along I suppose.

Anna Kendrick was a nice surprise in this movie and though Fiona is played by Gemma Arterton I'm still not sure who she is.    Ryan Reynolds has this way though of making movies that sometimes feel like you just don't want to even give them a shot (Though I did watch that one he did with Sandra Bullock) and then other times he has these movies where they just really work and you don't know why you haven't heard more about them.    Case in point, I remember his voice being in "The Croods" and "Turbo" in 2013 and though I've not seen it I knew he was in something called "R.I.P.D." in 2013 as well, but this was my first time hearing about this movie-- when I saw it in my Hulu listings.    I also feel like everyone should watch "The Nines" at least once.

If you like Ryan Reynolds, movies about strange serial killers and/or dark comedies then I would definitely suggest "The Voices".    On the scale of funny to dark I would place it somewhere between "8 Heads in a Dufflebag" and "Kalifornia", which are two of my favorite movies and as such it just seems to be that perfect combination between the two.    It's not overly funny to the point where you don't even begin to take it seriously after a while, but also isn't going to give you nightmares (probably).   I mean, Jerry does take the heads out of the refrigerator and talk to them, but when he does he imagines them as looking as they did when they were alive so it isn't *too* gross in that sense.    I was really just surprised that I could pick this movie to watch at random and enjoy it so much.

Posted by Joshua Macala at 7:17 AM