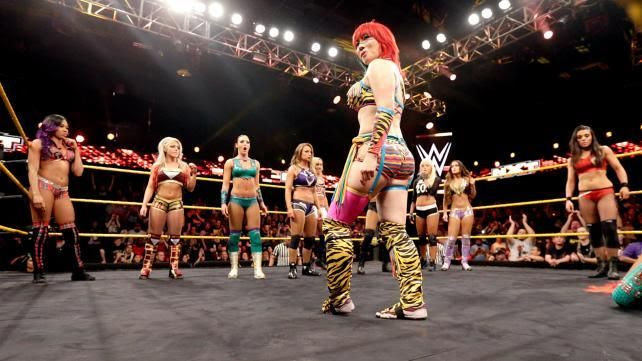 I began this week by watching what I believe to be the first episode of Ring of Honor TV over on their website and during these four matches we saw some really good wrestling on the show.     Last week I was looking for the new episode to be added to the ROH website on Thursday because I think that's when the change takes place but I feel like I couldn't find it all weekend and just kept getting that year in review clip show.    Then on Monday or Tuesday I checked again, saw an episode without Mandy Leon opening it up and so I watched that on Wednesday night because I thought it might go away on Thursday and guess what?   It did.   There is now a new episode of ROH TV on their website as I type this on Thursday, though I won't likely post this until much later.

I don't read any spoilers or results about ROH and just kind of watch their show on a weekly basis or whenever I have the chance.   It's odd because the first match on this show (which was episode 224 and aired on 01.02.16. according to a google search) had Roderick Strong defending the Television Title against a mystery opponent who turned out to be none other than Stevie Richards.     Caprice Coleman and Will Ferrara fought in a No DQ match which looked to be a way to impress Prince Nana who still somehow has a job with ROH after all of these years.   (Seriously, who else has been around as long as him?)   Jonathan Gresham (who is not the popular author John Grisham) scored an upset victory over Cedric Alexander and comparisons were made between Gresham and Daniel Bryan so now I'm just waiting for the underdog kid to start chanting "Yes! Yes! Yes!" (Though I'm pretty sure WWE would sue)  In the main event Michael Elgin defeated Donovan Dijak and when I was watching this I knew he was going to win because this was taped and aired on some television station somewhere prior to Wrestle Kingdom 10 because they kept talking about how Jay Lethal would defend the ROH Title against Elgin at WK10.   Jay Lethal was also on commentary at ringside, which brought out Jerry Lynn to tell Lethal that he is the better man.    Jerry Lynn has really short hair now and looks like he's a referee.

Last year I remember ROH starting off hot, right?   They had this momentum from Wrestle Kingdom 9, I was really getting into reDragon and then Alberto Del Rio made his ROH debut last year around February or so, right?    And they had a big storyline going where Jay Briscoe was ROH Champion and undefeated and, well, it felt like once he lost the title to Jay Lethal things started going downhill.   Samoa Joe used ROH as a pit stop before going to WWE and now you have to wonder who else will be in ROH this year and for how long.   The good news is that Mike Bennett is gone the bad news is I'll still see him in TNA.     While the next episode of ROH TV sits on their website for me to watch I don't know if I will include thoughts on it this week or next week because it just depends upon when I do finally get around to watching it.    Though I kind of want to watch it *now* so I can be caught up on ROH TV, but we'll see.

I was hoping to generate an entire review for TNA's One Night Only pay-per-view, their first of 2016, but there wasn't really enough on it for me to do so.   I watched it *after* this week's episode of Impact but it's strange because TNA is still building up the in ring debut of Mike Bennett, though he fought at the ONO PPV.    They haven't even said it's his "Impact in ring debut", just his overall in ring debut... which makes me feel like even they don't think people are paying $15 for their PPVs.    But what can you do?  One Night Only was what it was, and a few of the matches were good, but I wouldn't go out of your way to watch what felt like an extended episode of Impact.

On Impact the biggest pieces of news were EC3 putting his title on the line against Matt Hardy's career and Eric Young winning the King of the Mountain Title from Bobby Roode.   Now that Beer Money is back together I expect them to feud with the American Wolves for the tag team titles, so this title change made sense, but does anyone else see Matt Hardy winning the title from EC3 next week?   So just to recap: Matt Hardy defeated EC3 for the title.   A lawsuit followed which brought upon a rather long title tournament which came down to EC3 and Matt Hardy and EC3 won just so now he can... drop the title to Matt Hardy.   This really makes no sense to me and makes me feel like TNA doesn't really know what they are doing.

Would it really hurt TNA if they had Matt Hardy lose and leave TNA only to have him return under a mask or have Jeff put his career on the line to bring Matt back?   Imagine this:  Matt Hardy loses to EC3 and has to leave TNA forever.   Jeff Hardy says he's earned his title shot and he defeats EC3 for the title.   EC3 wants his rematch but Jeff Hardy says that for EC3 to get it he has to bring back Matt Hardy if Jeff can defeat him.   Then Matt eould only be back because of his brother, who also happened to be champion which is what Matt wants most of all.   It'd feel a lot less like that "only John Cena can bring back The Authority" storyline in WWE then you might think, but you know, TNA probably will just put the title back on Matt Hardly because, you know, that's usually what happens in these retirement stipulation matches.

On the WWE side of things (and speaking of bouncing around titles) Kalisto had a shocking win over Alberto Del Rio on RAW to capture the United States Title only to lose it back to ADR on Smack Down!, which totally made sense, right?  ... Right?   Why did Kalisto lose it back so quickly?   Would it really have hurt to build up to a Wrestlemania match between the two?   They'll probably both just be thrown into a Money in the Bank match anyway, but a boy can dream.

Brock Lesnar was also made official for the Royal Rumble match which means that either a) he is going to win it and Reigns will somehow face him again like last year only without Seth Rollins cashing in or b) Kevin Owens can eliminate Brock and then they can face each other at Wrestlemania.    Though I would not be opposed to Lesnar winning the Rumble and then Owens somehow winning the right to challenge him for the title at WM32.   Have an Elimination Chamber match where it comes down to Reigns and Owens, but HHH returns, costs Reigns the match and it's Reigns vs. HHH at WM32.    Take Reigns out of the title picture.   But who knows, Daniel Bryan could return in the Rumble and throw a wrench into the works for all I know at this point and that makes it that much more interesting.

Aside from our typical week in WWE and TNA, I was glad to see NXT return this week with actual matches and no longer as simply a recap show.    The show opened with Sami Zayn trying to come back into the title picture only to be stopped by Samoa Joe and then Baron Corbin came out as well, which brings us to an eventually threeway match to determine the number one contender.    It's funny but whether it's Kevin Owens or Samoa Joe I just really look forward to people destroying Sami Zayn.   I'm not sure why, but I really, *really* want to see Brock Lesnar beat the living hell out of Sami Zayn for some reason.   I don't know what it would take to get to that place but it could be amazing.

Tommaso Ciampa seemingly made his "I'm signed now" match debut, tag champs Dash & Dawson defeated The Ascension and Elias Sampson had another boring squash match.    There was a women's battle royal to determine the number one contender to Bayley and it actually counted eliminations when the woman went *over* the top rope (usually WWE has their divas go out any way they can as long as they hit the floor)  A bunch of new women were seen in this match that I was really hoping Asuka would win.   But she was jumped from behind by Eva Marie, who hid outside the ring for most of the match, and then Eva Marie got the double swerve and was dumped out by Carmella.    I'd argue the whole idea of Carmella being a heel for doing the same thing that Eva Marie did, but well, I don't think anyone wants to see Eva Marie in the title picture anymore.

Hopefully we can get some decent Asuka vs. Nia Jax before they're battling over the title.   I'd say it'd be like watching Gail Kim and Awesome Kong in TNA but I think Asuka-Jax is going to be a lot better.    So at least we have that to look forward to, some new female faces in NXT and a big congrats to Deonna Purrazzo as she appeared in both the Knock Outs Gauntlet at the ONO PPV and the NXT battle royal.

Posted by Joshua Macala at 7:17 AM