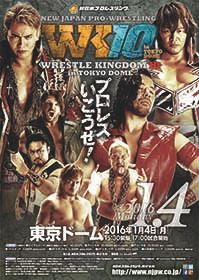 In what was the first full week of 2016, Ring of Honor was still on vacation with only their "Best Of" special being available on their website.   But this week still saw NJPW Wrestle Kingdom 10, the debut of TNA Impact Wrestling on Pop TV and a whole bunch of WWE, though sadly NXT was also in the "Best Of" mode which is something that I admittedly skipped over.    So here are some highlights and other points of the week.

The week- and really the year- kicked off with a bang, as it tends to do, with Wrestle Kingdom 10.   For the first time ever, the ROH Title was defended on WK10 as Jay Lethal retained over Michael Elgin.    As much as I enjoy Jay Lethal (He is a great all around wrestler and entertaining as hell) I'm growing rather tired of his using Truth Martini to get wins thing.   Though the idea that the Book of Truth was translated into Japanese just for that match kind of amused me.     Wrestle Kingdom 10 was a solid show all around, as you'd expect, and I just feel like NJPW is doing some of the best work that they've ever done.   Even if you don't watch NJPW regularly and perhaps this would be your first time seeing it, they have a compelling story to tell with every wrestler in that ring.   It really takes me back in a lot of ways to when I was a kid and I was watching WWE without really being aware of the storylines side of things and just watching people fight in matches which made sense.

If you want to do the math for east coast time to Japanese time you can, but one similarity I found between Wrestle Kingdom 10 and WWE RAW (which were on the same day technically, right?) was the wrestler toss.   On RAW, Bubba Dudley threw Kalisto to the outside on a bunch of the other wrestlers in the match while Cody Hall did the same thing in a match featuring the Young Bucks at WK10.   Did anyone else get that deja vu sense watching that one again?   I actually watched Wrestle Kingdom 10 before I watched WWE RAW, but I watched both a few days after they happened and even I still felt the sense I'd seen it before when Bubba did it.

Speaking of WWE RAW, the big talking points coming out of that are the return of Chris Jericho (again) and Roman Reigns having to defend the WWE Title for the first time ever inside the Royal Rumble match itself.    Chris Jericho's return felt a little flat in the sense that it was like, "Yeah, he's back again" and it didn't have that big feel it maybe should have because Jericho keeps coming and going, you know, sometimes I think he's even on television more than some of the wrestlers currently under full time contract (Where are you Damien Sandow?)   The Royal Rumble-WWE Title idea is interesting but it also kills the idea of WWE creating a new star with the Royal Rumble.    Just think how great it could have been for someone who had never really challenged for the WWE Title to win the Royal Rumble and go on to Wrestlemania 32 to fight for it.    Even someone like Kevin Owens, Bray Wyatt or Dean Ambrose won't be as likely to win the Rumble now because they'd be champion right away.

On the other hand, if you can get past the idea of WWE not wanting to create new stars, the Royal Rumble match has some interesting possibilities now for who we could see in it.   Daniel Bryan returning and winning would be amazing, but I'd even be happy with Brock Lesnar winning the Royal Rumble.   Of course I expect that at the February PPV they will determine who fights for the title at WM32, probably using the Elimination Chamber and if Roman Reigns does indeed lose the title inside the Royal Rumble match that could be his way of getting back into the WM32 main event.   But it is certainly an interesting time for WWE right now as we head into Wrestlemania Season and yet so many of their top stars seem to be injured.

Meanwhile in TNA they had Impact go live for their debut on Pop TV so of course they open with... talking.   Lots and lots of talking.   I know that they had the semi-finals and finals of their World Title series which seemed to go on for-EVER and Bobby Roode issued an open challenge while there was also a Knockouts match but, yeah, it felt like there was a lot of talking on this show and little else.     The World Title series matches were all right and I like the idea of Matt Hardy and EC3 in the finals having no one in their corners, proving that EC3 can do it on his own and is supposed to be called champion.    This also raises an interesting point which I hope TNA addresses in the future, but might not.    If it is EC3 vs. Matt Hardy without Jeff Hardy does that mean that Matt only really won previously because of Jeff?   Doesn't that mean Matt Hardy is indeed not better than EC3?   Things could get interesting if they decide to explore this idea some more, which I think they might after the way Matt Hardy reacted after losing.

I started watching Impact while Quentin was at school and when he came home the match between the Dollhouse and Beautiful People was on.   He asked me "Is this SHINE number two?", which was a fair question.    I actually liked the Dollhouse vs. Beautiful People match and the result with Awesome Kong destroying the BP.  I was kind of hoping she'd beat down the Dollhouse as well, but let's face it, the Dollhouse is one of the most interesting aspects of TNA right now, especially since they no longer have Taryn Terrell.    Sure, it's cool to see James Storm back (though I feel he could have had more potential in WWE for something fresh) and Eric Young always looks good in his cardboard-cutout type vest thing, but you know, if you're not watching Impact for Mia Yim and EC3 then I don't know why you're watching.

Does TNA still have tag team titles?   Are there any titles in TNA that aren't their World Title or that King of the Mountain one I think they created just for Jeff Jarrett who up and left again?   Where is the X Division?   Where is the KO Title?  Does anyone know??  I'm sure it's all on their site, but I'm not bothered enough to look it up right now.   I also feel like it's been a while since I've seen Rockstar Spud but I'm not complaining.

We also saw the debut of "The Miracle" Mike Bennett, accompanied by Maria and, well, I was never a fan of Maria- not in WWE, not in ROH, just never- and so it will be interesting to see how she plays as a heel in TNA.   It is also interesting to note that Christy Hemme and Maria are working together again.   It's like early 2000 WWE all over again.   Someone call Ashley Masssaassaarro or whatever and see if she wants to come hang because that's how TNA is looking right now.

What I've learned from professional wrestling this week- if nothing else- is that Kenny Omega is in NJPW and should be in either WWE or TNA.    Yes, I've read what are *rumors* right now about AJ Styles and others from NJPW signing with WWE, but the fact is, how is Kenny Omega still in NJPW?  I remember him stealing the show last year at Wrestle Kingdom 9 and yet he is not in WWE or TNA how?

While TNA was debuting Impact Wrestling on Pop TV, WWE was moving Smack Down to the USA Network and did so with a special episode that was pretty much more of the same from them.   Though the show should have had some sort of new feel to it (I really try to drown out commentary as much as I can when watching WWE so I didn't notice that factor too much) I guess it didn't really need to since SyFy and USA are under the same banner anyway so it wasn't really that huge of a move.   I just wish for once something exciting would happen on Smack Down! to not make it feel like The B Show.

The Week in Wrestling finished off on Friday night with a special One Night Only pay-per-view from TNA, which will have its own post, and so for the beginning of 2016 the state of professional wrestling isn't looking too bad.    There is a lot of buzz about top NJPW stars coming to WWE, the Royal Rumble is building and, well, we haven't even seen the season premiere of Lucha Underground yet!   This could be the year of professional wrestling-- the year we turn it all around again.