This is our fourth season going to Yale football games which is odd because Quentin will be four in January, when the season is over, and so it seems like he's been going to games since before he was born but really it was just that he was going to them before he was a year old.   In our previous three seasons we have taken pictures with Tyler Varga at least once every season and now he is one of the few Yale football players in the NFL, which is pretty crazy.    As much as I look forward to football season with the NFL (Though not as much as baseball season), I still like that it implies the start of the Yale football season most of all.   This year the Harvard game will be at home but there are only, sadly, four home games in total.   Yale typically has ten games per season and at least five of them are usually at home but last season they did have six so I suppose this is simply their way of balancing it all out.

I didn't get out of work until noon so we had to hussle to the Yale Bowl, where as if I wasn't working we would have left a bit earlier and maybe even made it to the Yale Bowl by noon.   It was also Youth Day so the plan was for my wife and son to go down there when that started at 11 am and then my dad picked me up from work and he and my uncles and me all went together later on.    As it turns out, my wife got stuck in traffic and didn't make it to the Yale Bowl that much earlier than us but that's okay.   We still didn't really miss any of the game.

On our way in we saw an old looking Rocky- yes, the Rock Cats mascot- but he was walking towards behind the box office so we missed any chance of a photo opportunity with him.   The Yale Bulldog was also out and then disappeared about just as quickly, so we didn't get a bulldog picture for this first game either.   I kind of expected my wife would have already taken such pictures before we even got there but what can you do?    We did, however, see the Yale baseball team promoting their game later in the evening against Wesleyan, so I asked them if they would take a picture to which they gladly obliged.   It's kind of funny to think we went to the first football home game of the season and Quentin took his picture with baseball players but life is random sometimes, isn't it?

By the time we got into the game- mainly because my dad and uncle stopped to buy a program while Quentin and I stopped to buy a mini-Yale football that was a bit overpriced but a perfect size for him so how could I resist (I wasn't about to spend $30 on a plush bulldog)- Cornell already had taken the ball near the end zone and by the time we were in our seats they had scored the first touchdown.    In the second quarter, Yale took a bit of a beating as they were down by two touchdowns and losing steam.   A group of college aged kids came in to sit down behind us and one of them said that Cornell was "killing" Yale but I even feel like at the time that might have been a bit of an overstatement.    Still, going into the half Cornell lead Yale 26-13 but Yale did manage to put some points on the board so that they weren't being beaten as badly as they were at first and it looked somewhat hopeful for them.

At half time I had to buy a Coke and pretzel because I didn't have anything to eat prior to that all day.   I need to start eating better, really I do.    And the story of Yale winning this game was them doing essentially what they needed to do all game only within the last half of it and a lot so in the fourth quarter as well.    On one play, Yale intercepted the ball and you would have expected them to score then and rebuild some ground but the fact that they couldn't made it seem like they weren't going to come back at all.  I'm not sure if Yale just figured out how to work Cornell, much like a pitcher finding his groove in later innings, or if Cornell just became too complacent with their lead, but Cornell took a beating from which they could not recover.

The interesting thing to me about football is that the other team always has that chance to score.   In baseball you take turns as well, but it just seems easier to strike out a side or get the side out somehow if you are having a good game and they are not.   For Cornell though, it seemed rather easy for them to put together first downs and work their way down the field and score again after Yale mounted a come back.    But they didn't.   And they couldn't.   Yale stuffed the quarterback and just held Cornell back enough times that they weren't able to score at all.   Think about it.   All of the points scored by Cornell were in the first half.   They were scoreless in the second and that just kind of shows you the type of game that Yale played defensively.    And as much as they needed that defense they also found the offense putting up 17 points in the fourth quarter.

I'll tell you one thing for sure: I thought Cornell would respond after Yale scored.  I didn't think the game was going to be tied.   When Yale did tie it though I expected it not to go to over time but for Cornell to work their way into at least field goal range and take the lead and then win the game that way.   (Which should have been their strategy)  The fact that they couldn't do that just goes to show you why Yale deserved to win.    While working their way into field goal position, Yale managed to instead run in a touch down with under a minute to go.   It took about ten to fifteen seconds for them to do it, so with over thirty seconds left on the clock you knew Cornell could still come back and tie the game.   But they didn't.   And for the final possession, Yale quarterback Morgan Roberts took a knee and let the clock run out.

I read about Yale coming back the week before during their first game of the season but this was just so much more exciting because we were actually there to witness it in front of the home town fans.    There were a lot of penalities- many flags thrown on plays- and I think that delayed the game a bit, but it is also worth noting that this season they were playing music in between plays and also sometimes during the game.   It was strange to hear hip-hop while a kicker was running forward to punt and as such if it doesn't happen over the next three home games I will not complain.    Apparently though, this is going to be the season where the Yale Bulldogs are the comeback kids.

After the game we went onto the field to meet the players, not sure who to take pictures with because of the lack of Tyler Varga.   Quentin said he wanted to take a picture with Kyle Mullen (98) and so we did.   Of course we asked him first and he was very nice about it.   He even gave Quentin one of his gloves.    We also then took pictures with Jason Alessi (19), Candler Rich (7) and Sebastian Little (4) because they all had a fantastic game.   Hopefully this will be the feeling over the next three home games as well, which resume on Halloween.


Upgrade from Last Season: They painted some of the benches.   The keyword there being *some*.

Downgrade from Last Season: In between music nonsense.  I have nothing against hip-hop but there is simply no need for that in the Ivy League and I feel like at times it even became distracting for the players themselves.

Program Cover: A compilation of Yale-Cornell posters over the years.   For the 100th year celebration last season there were no players to grace the program covers.   With only four covers this season it is odd they gave one to not-a-player as I really had hoped to have a Morgan Roberts program cover this season. 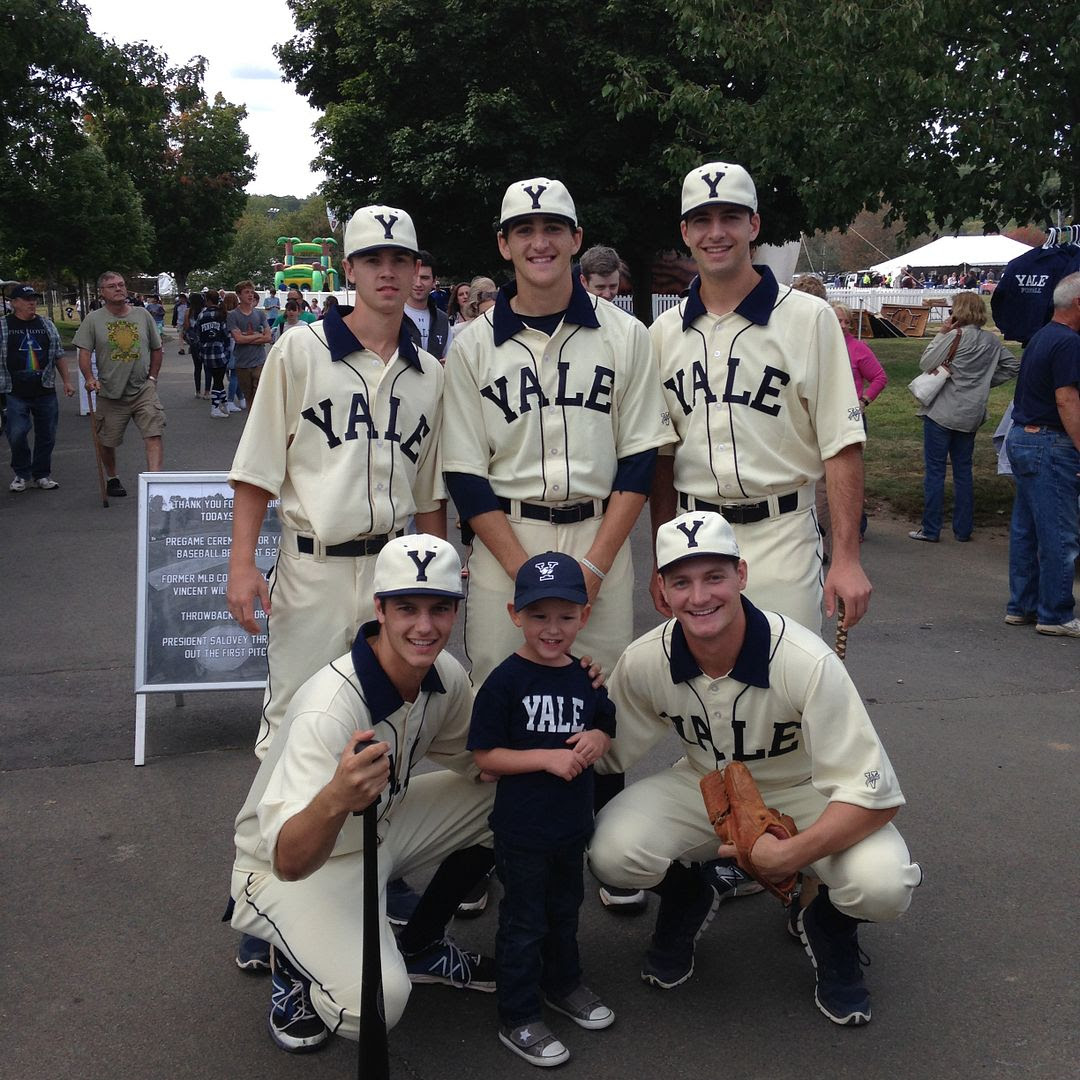 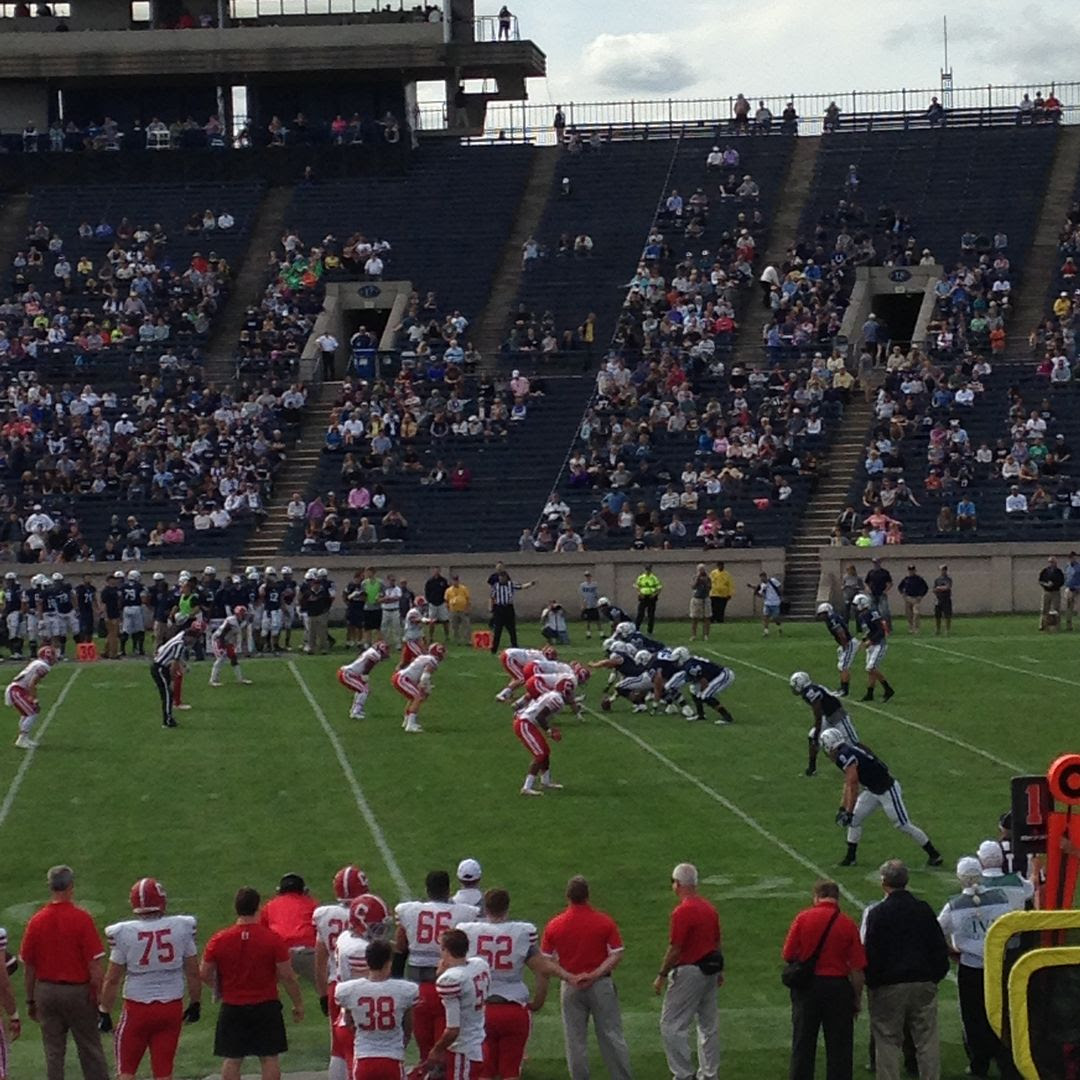 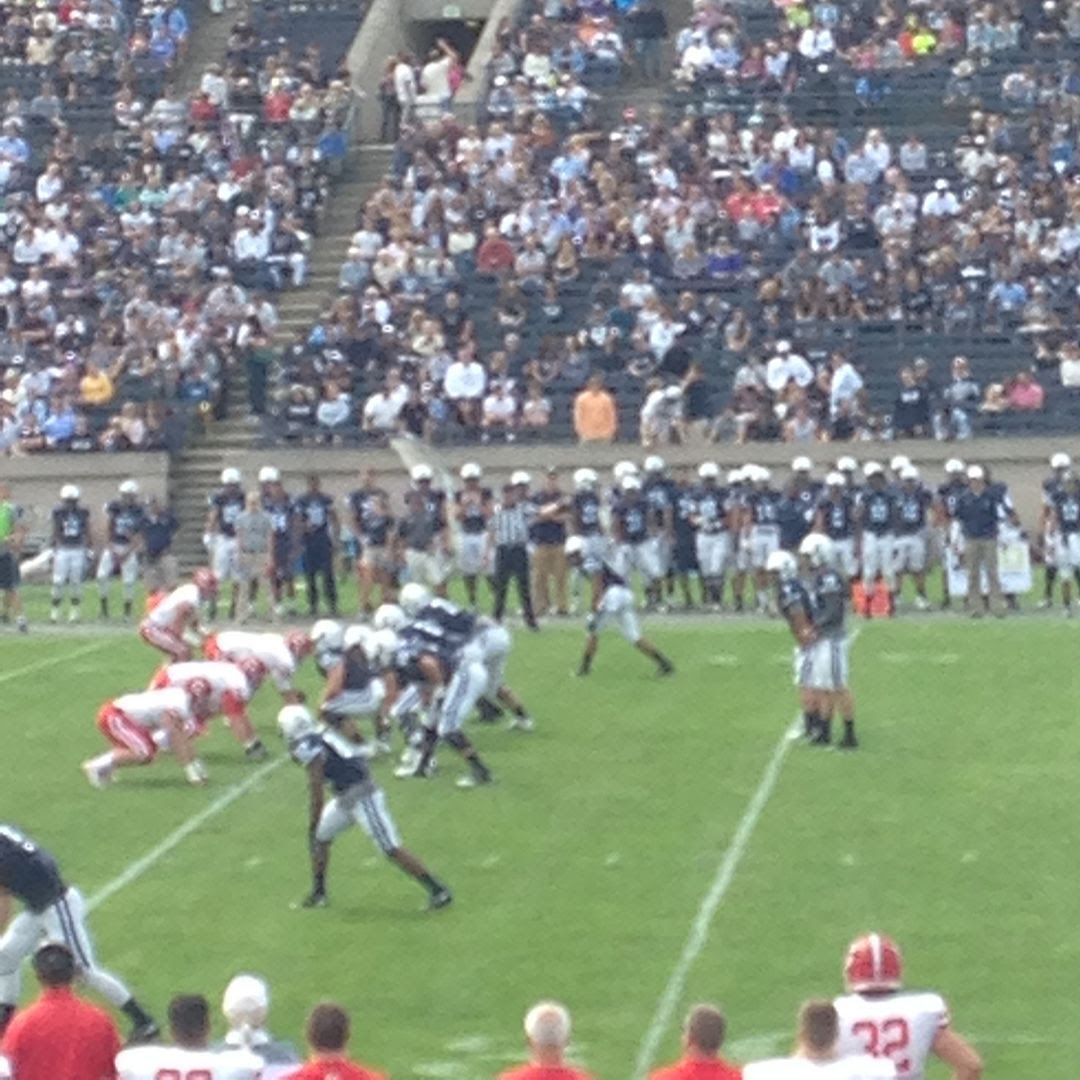 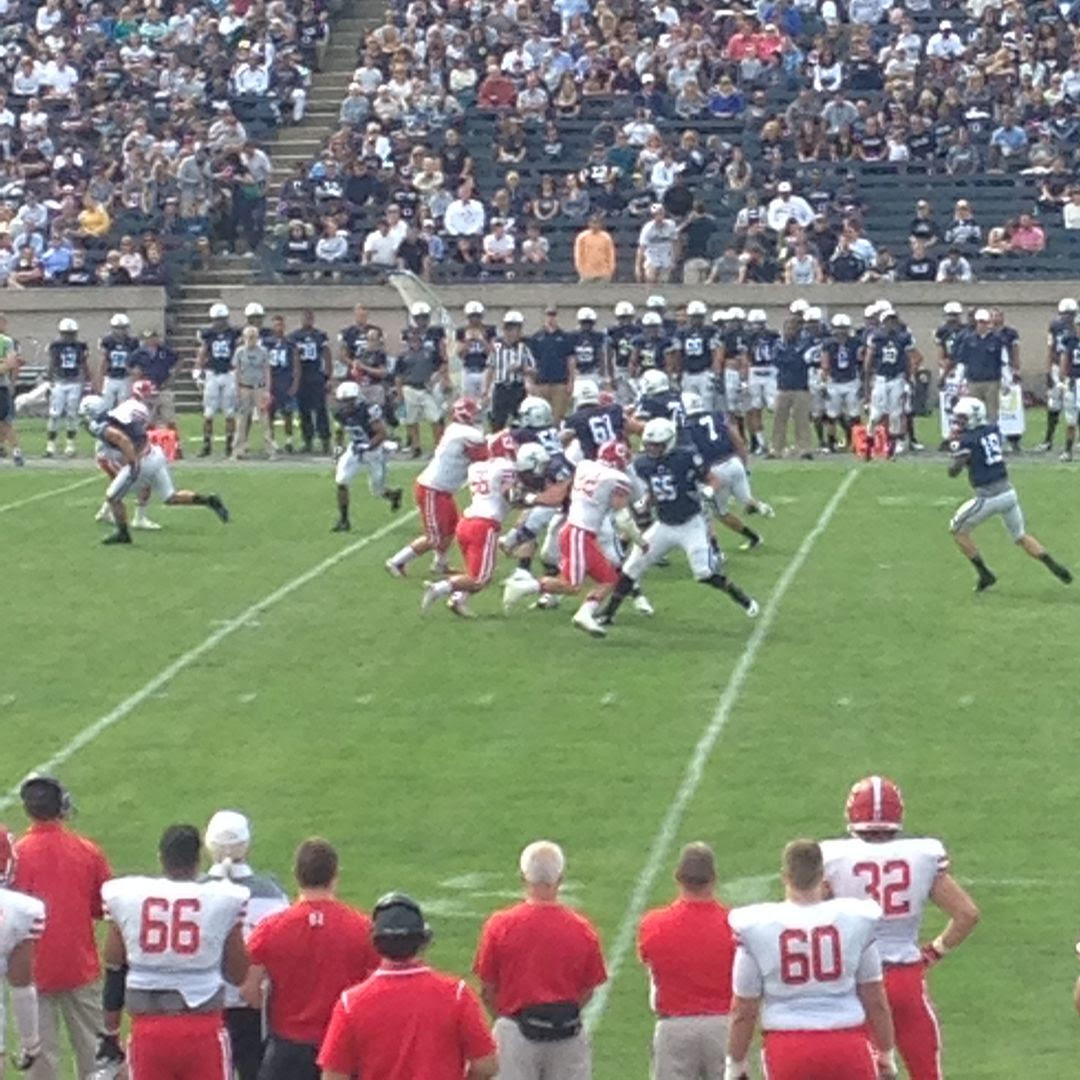 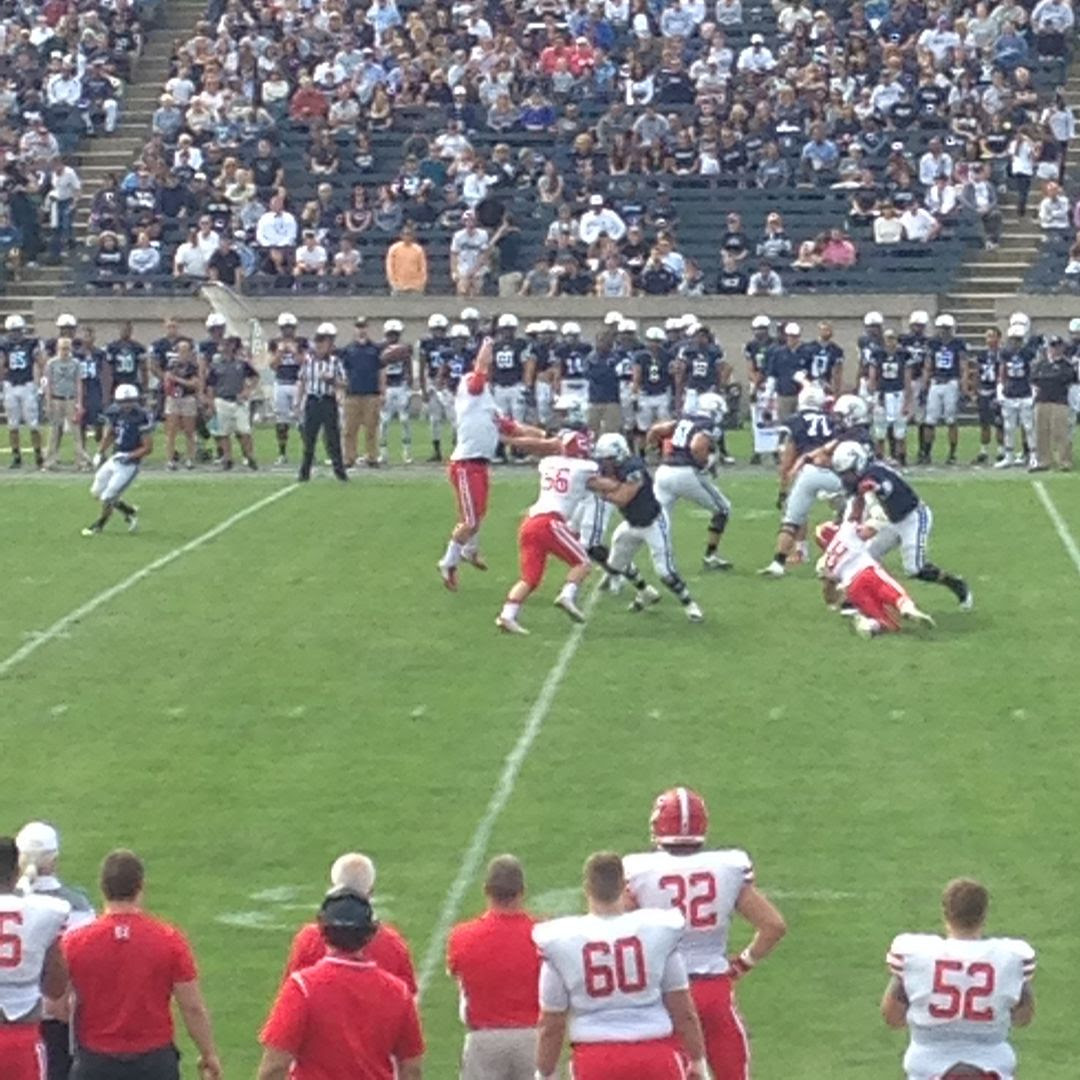 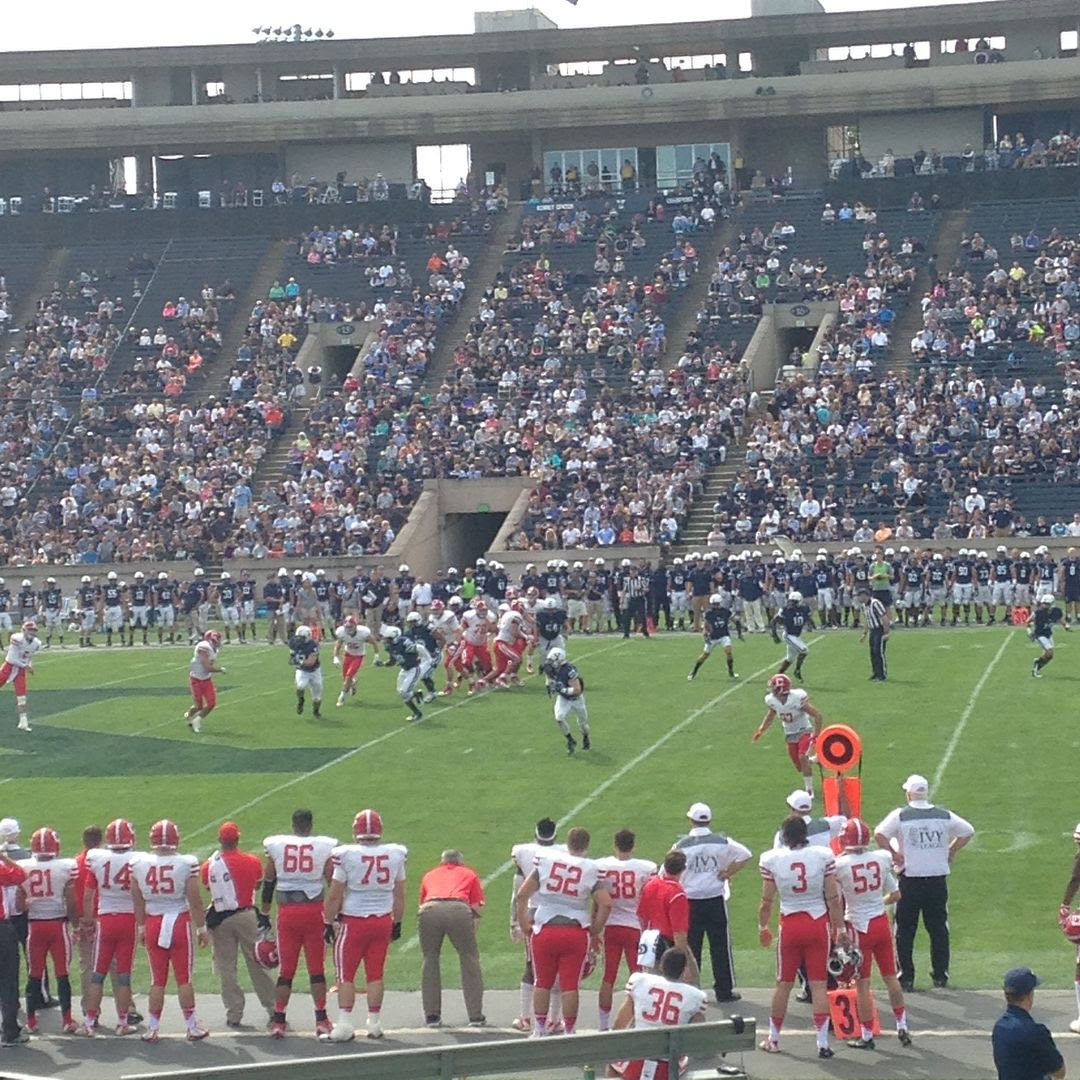 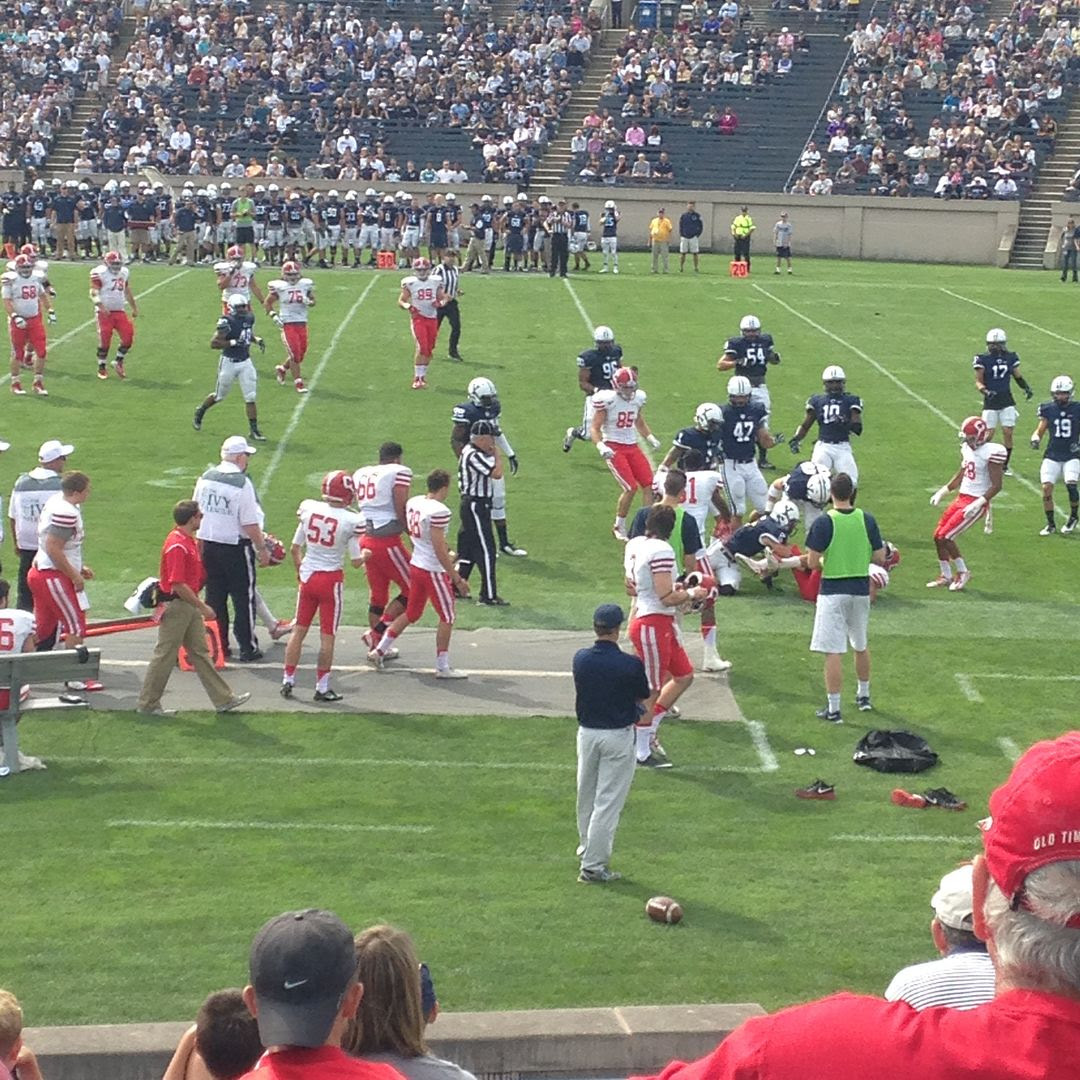 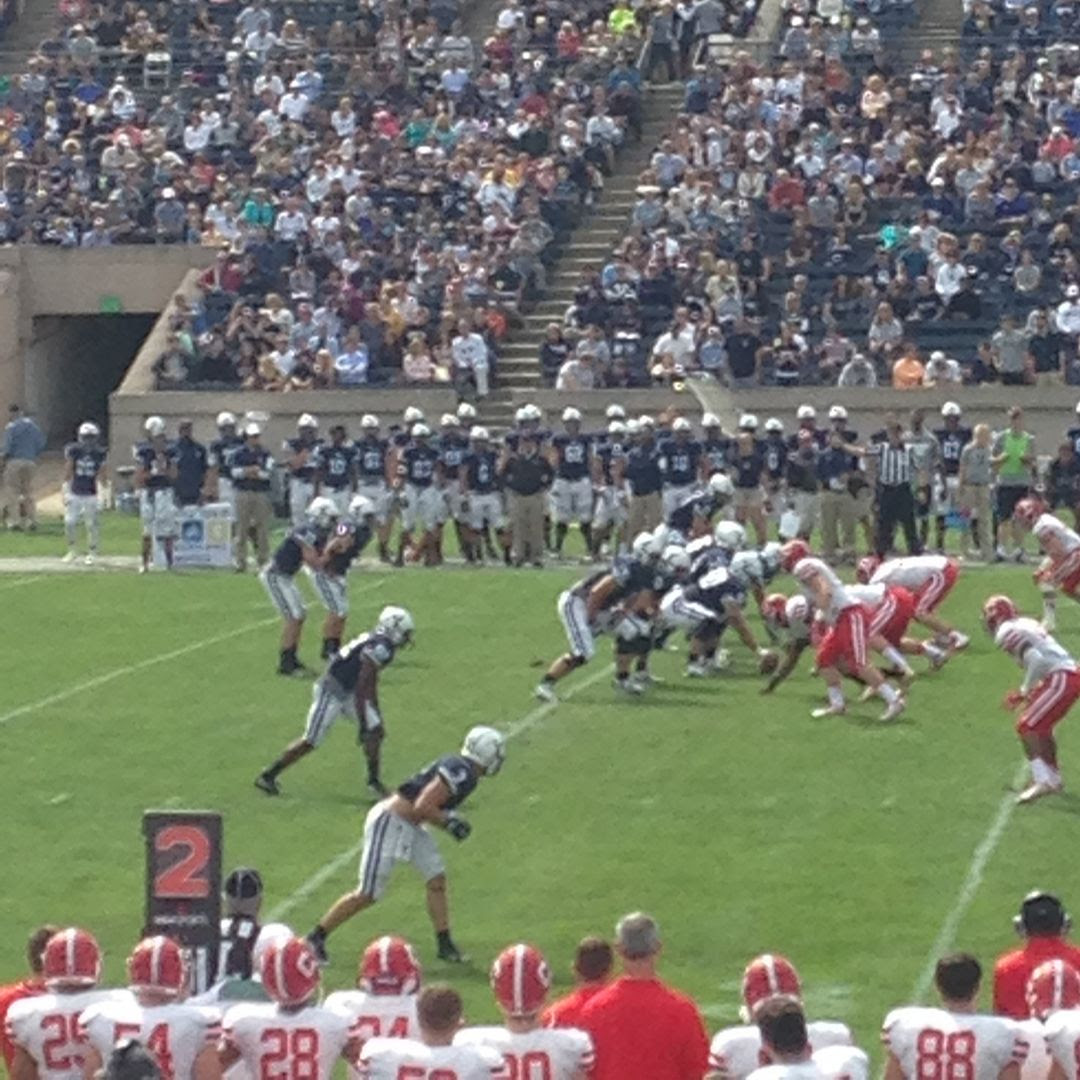 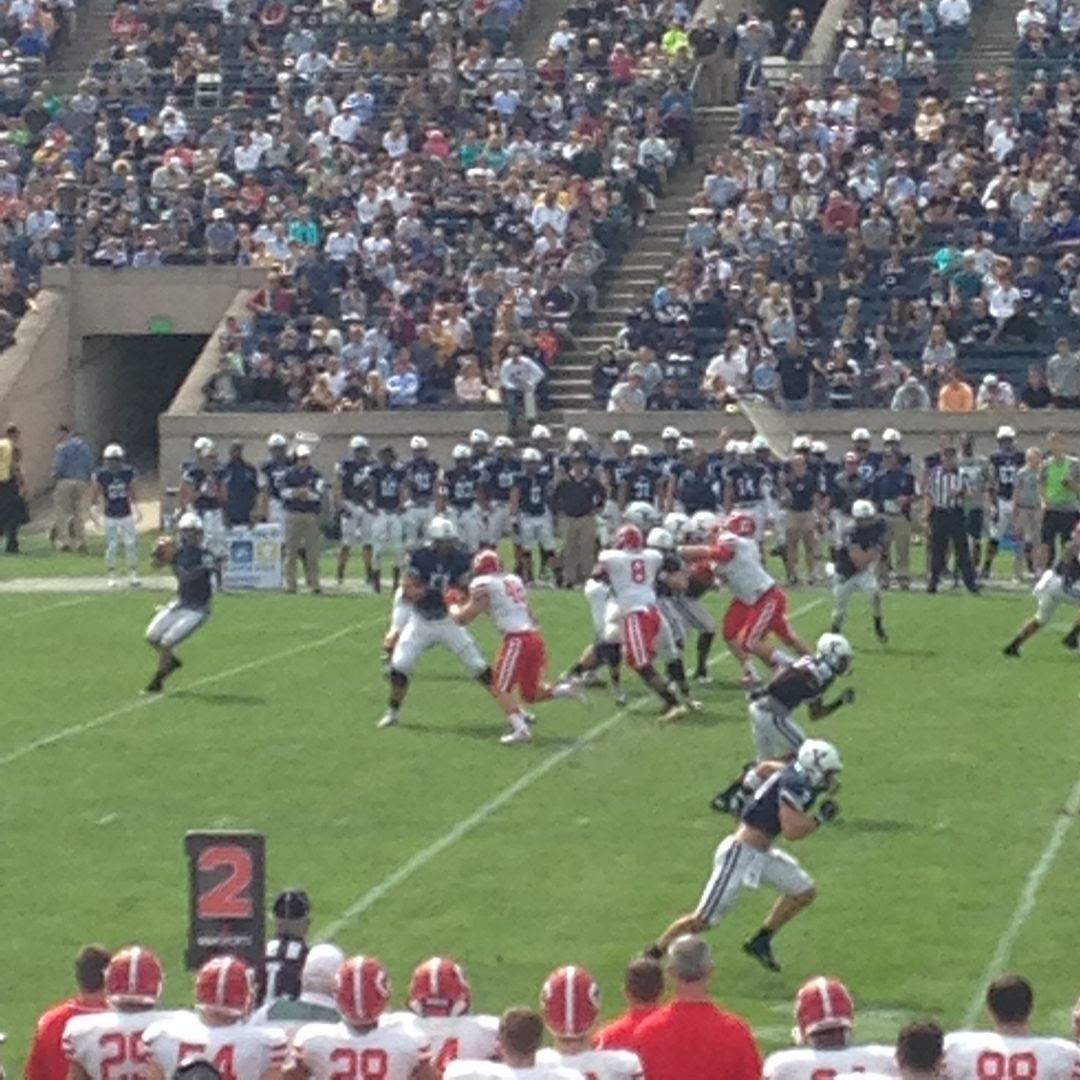 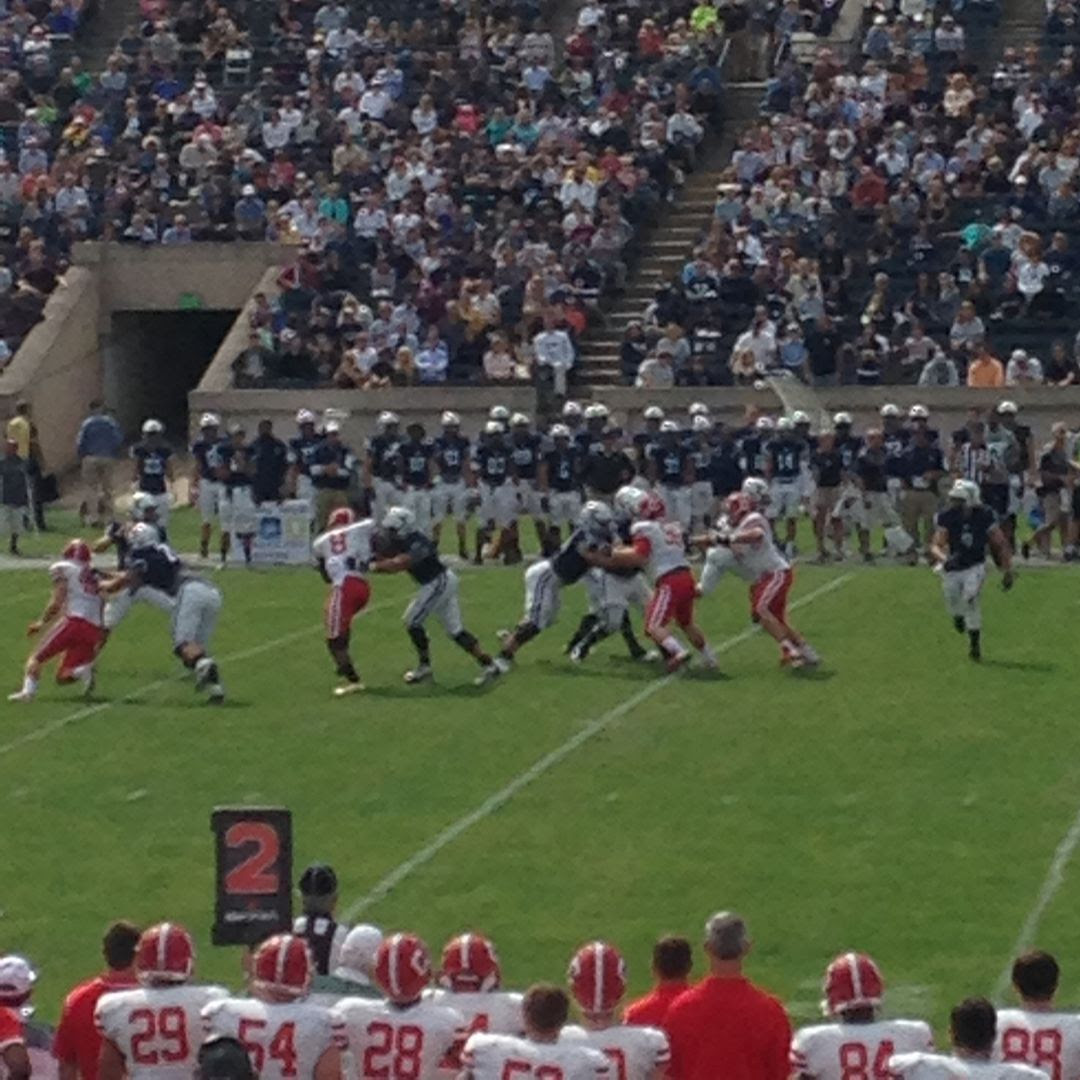 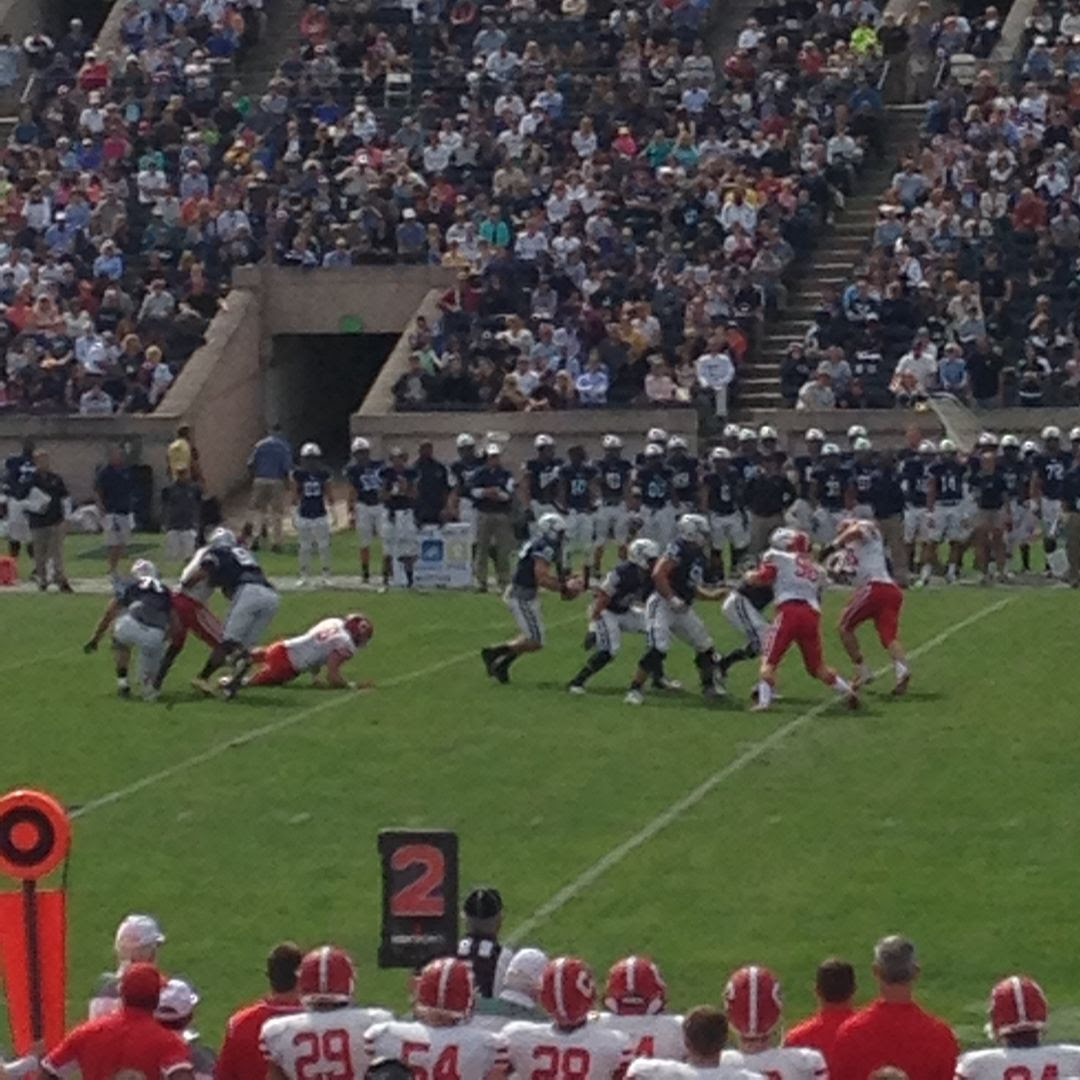 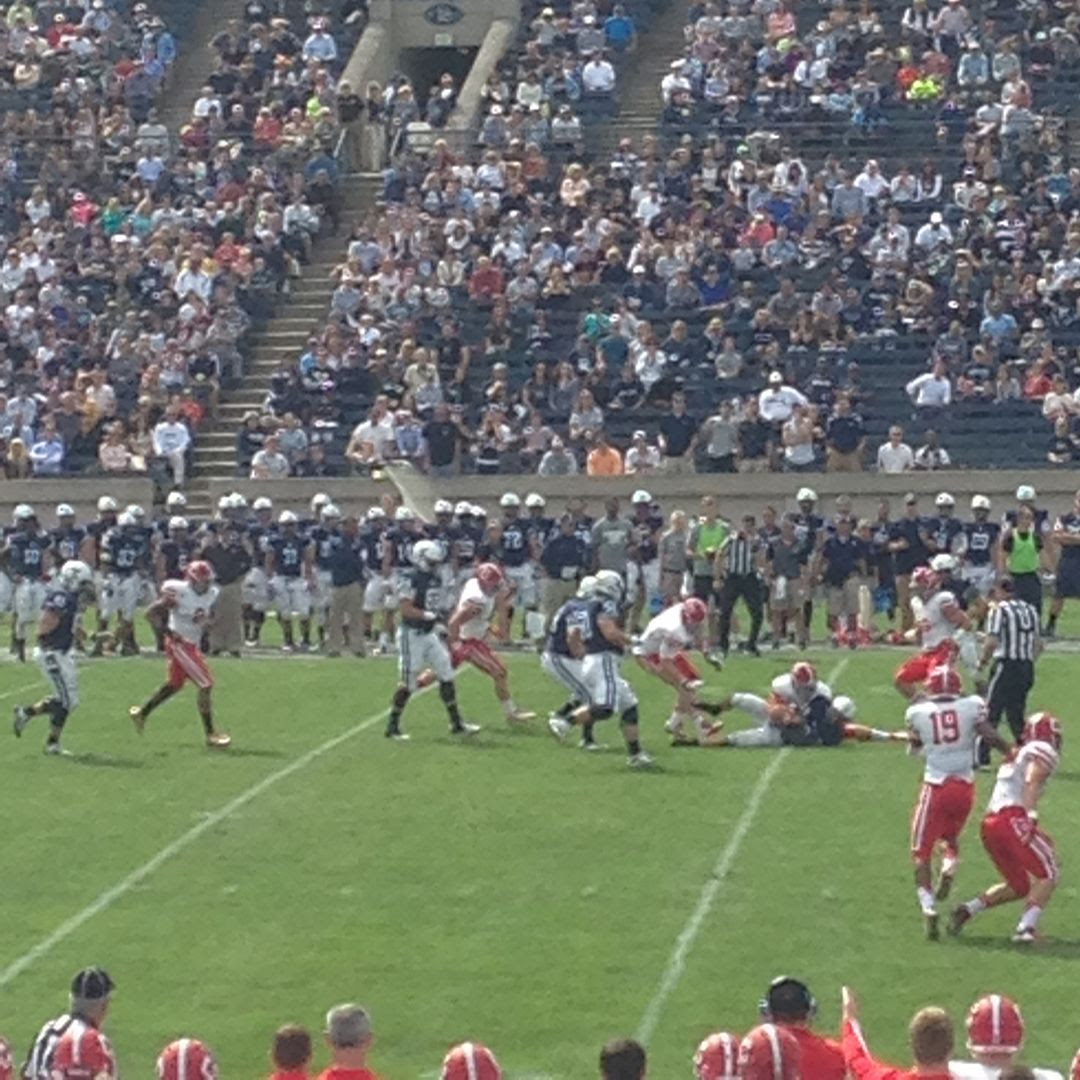 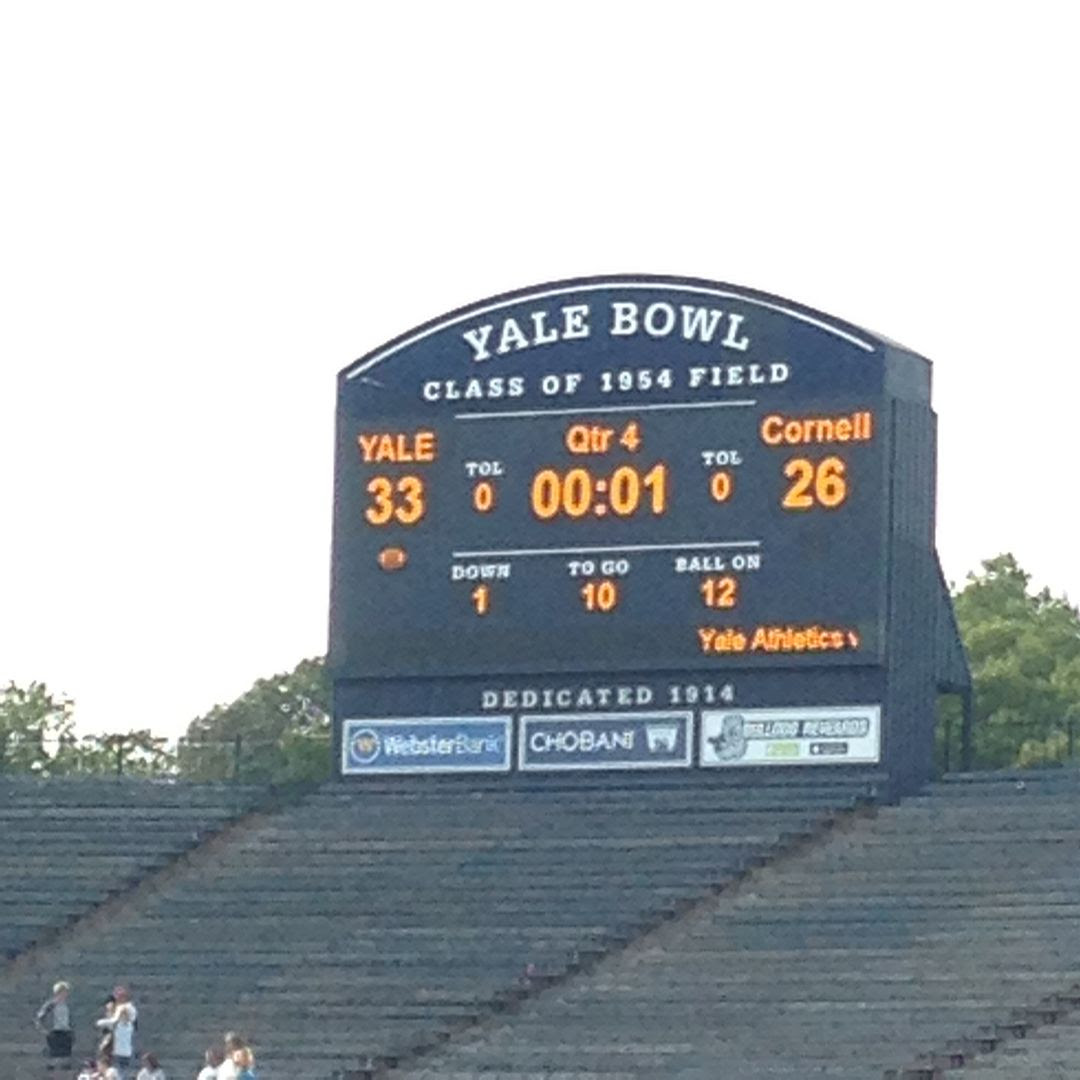 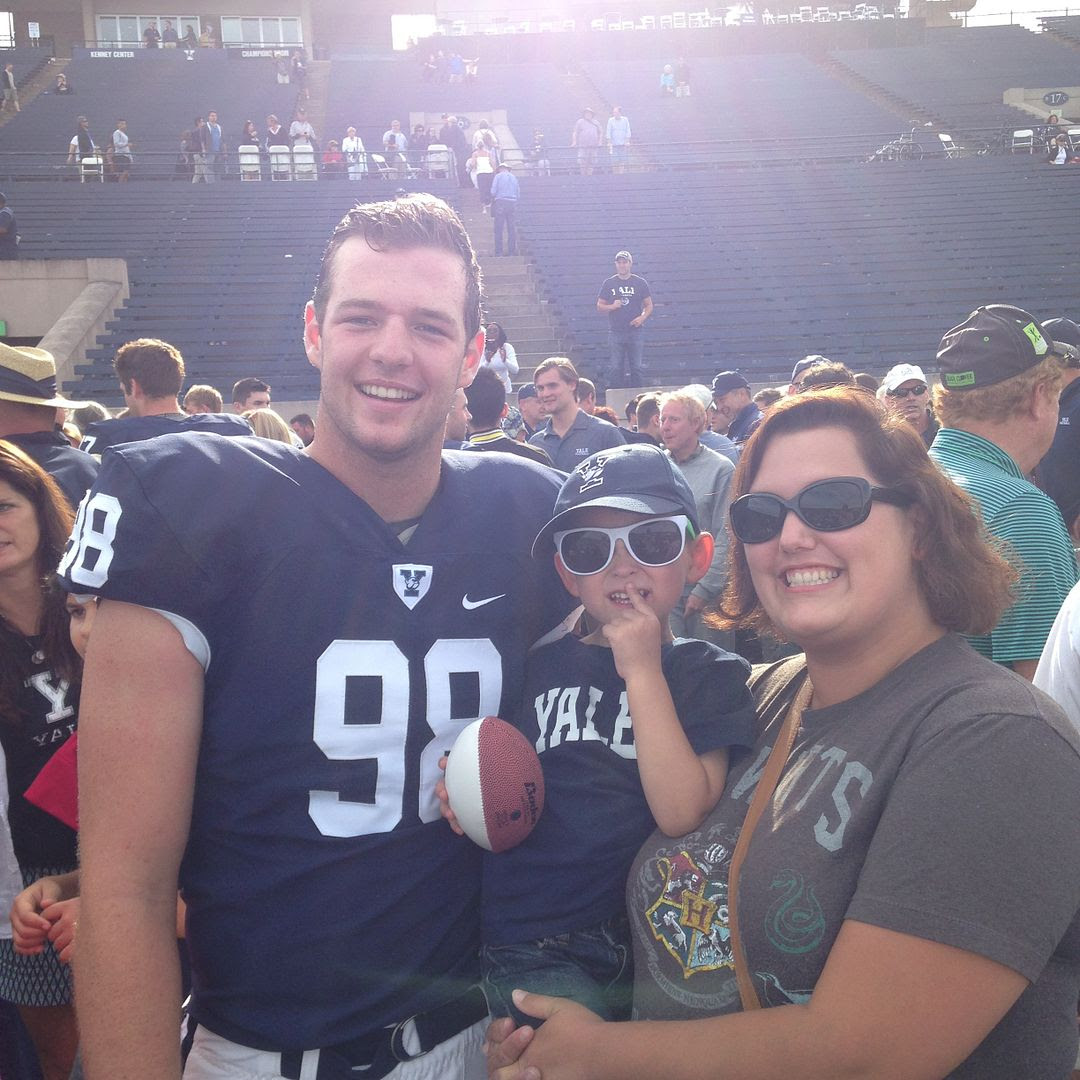 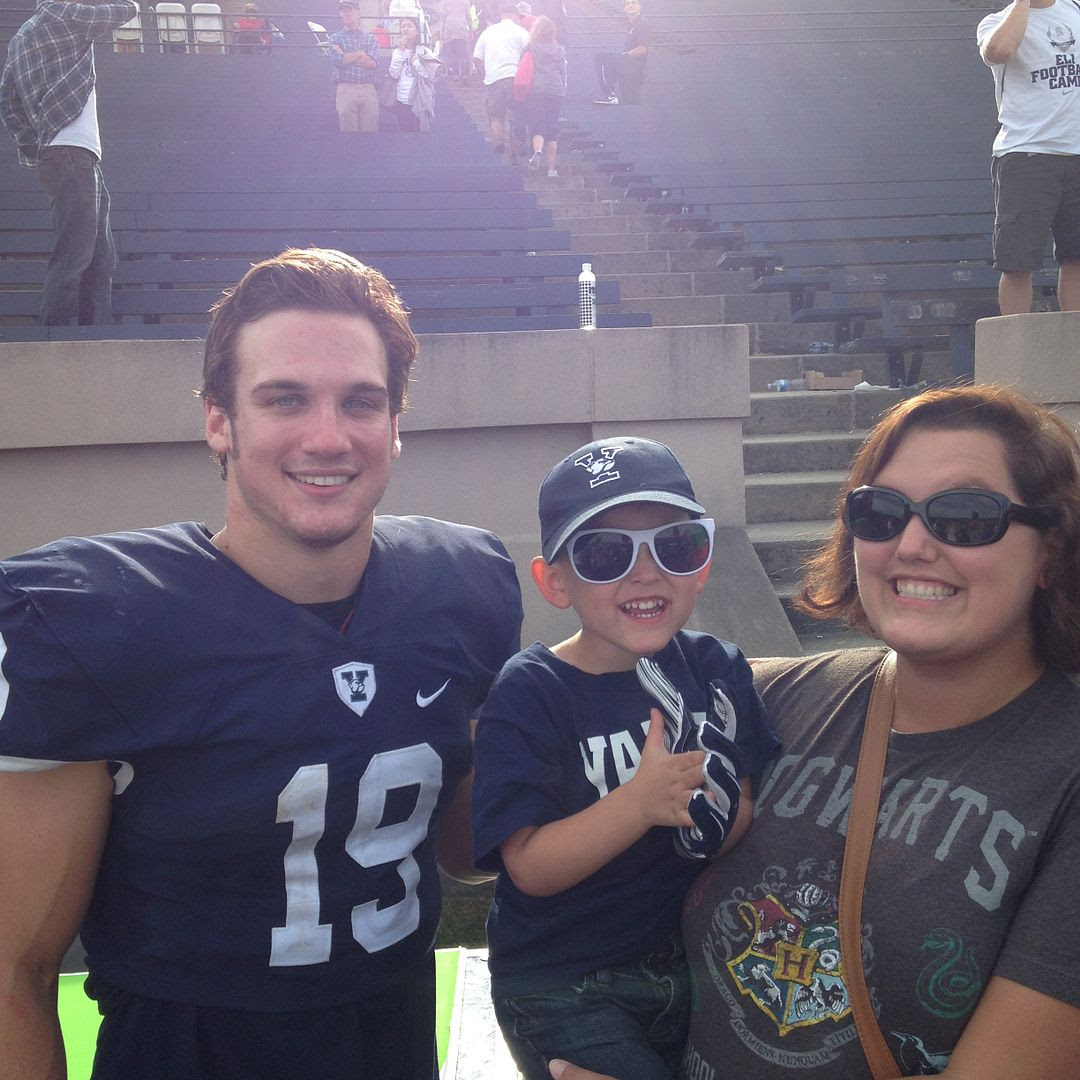 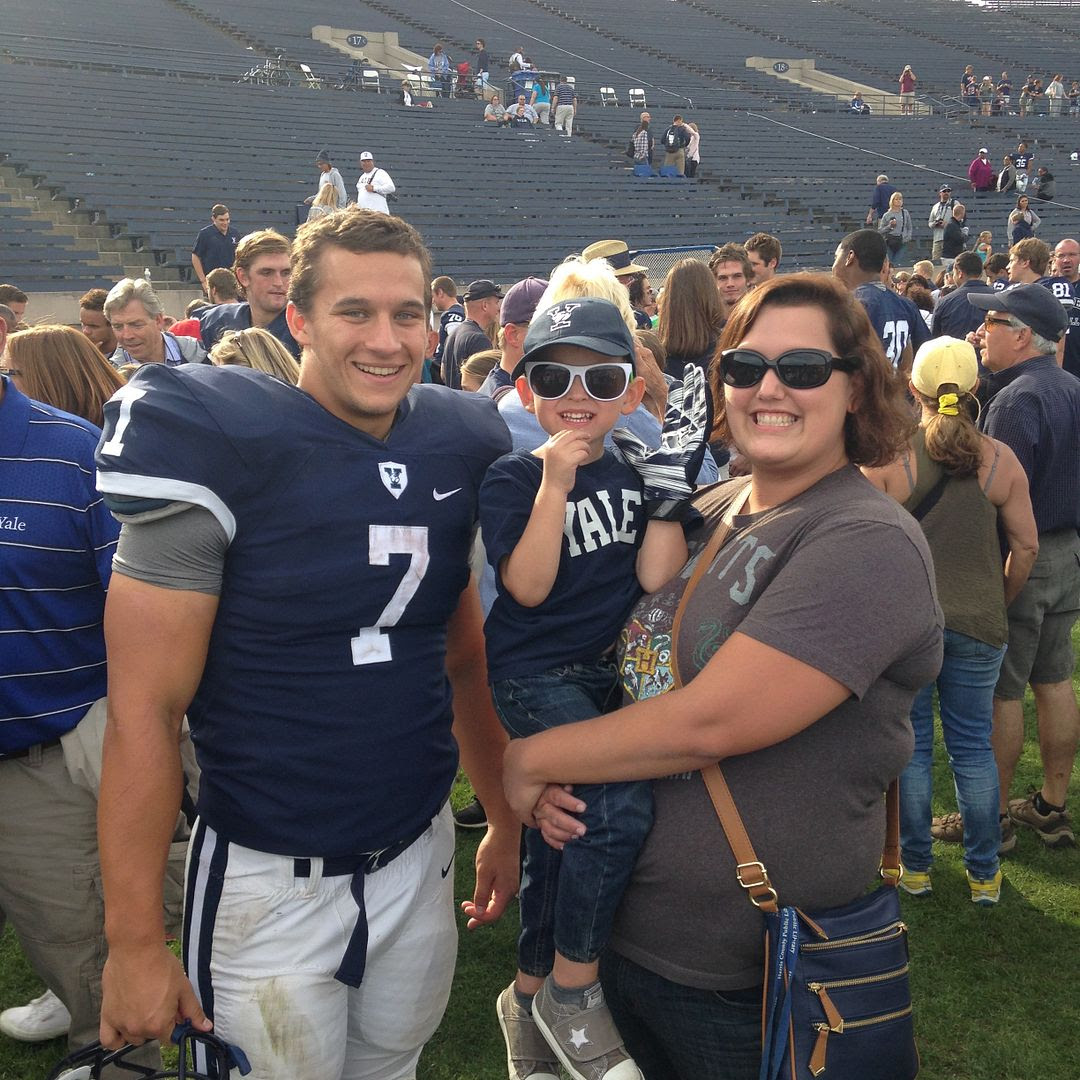 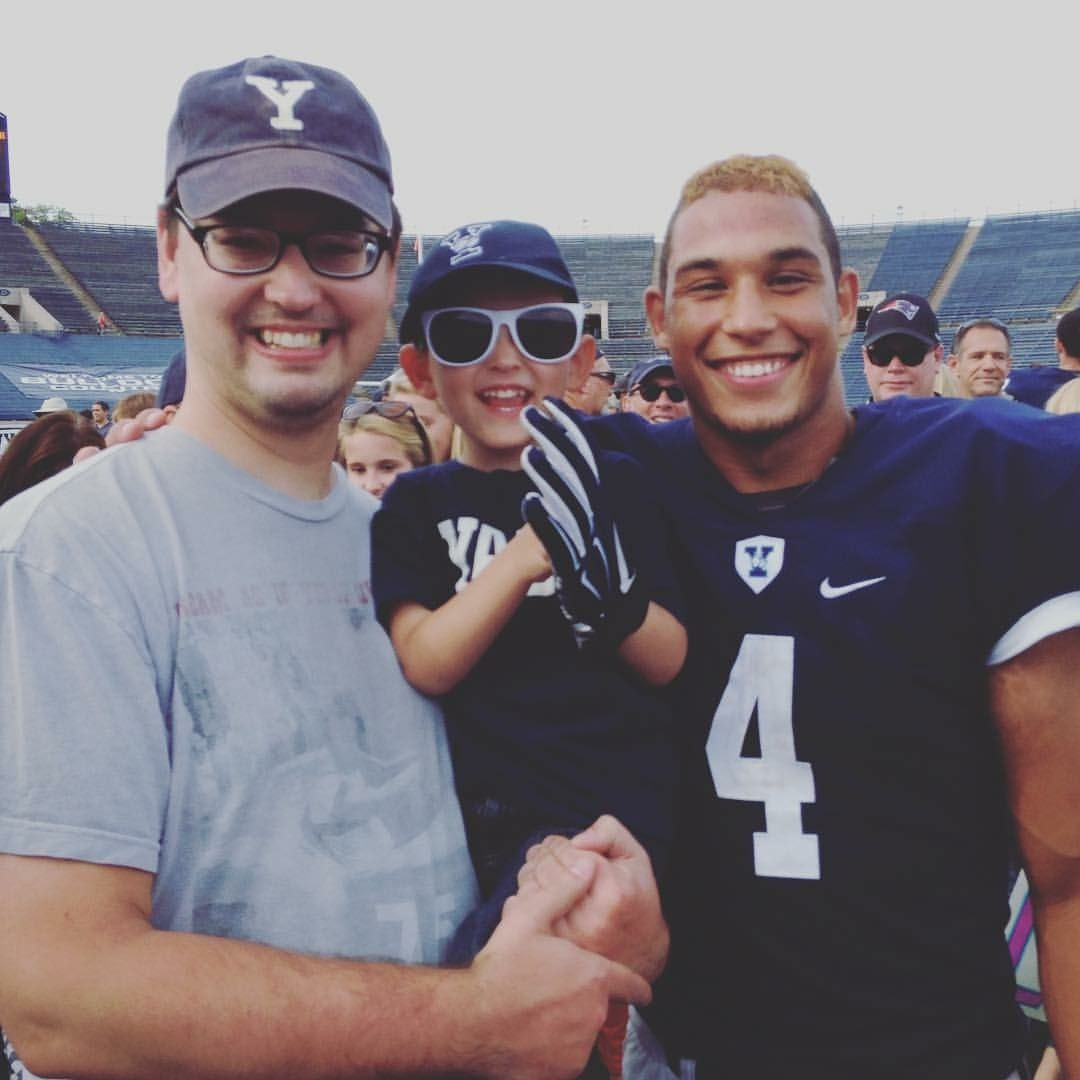 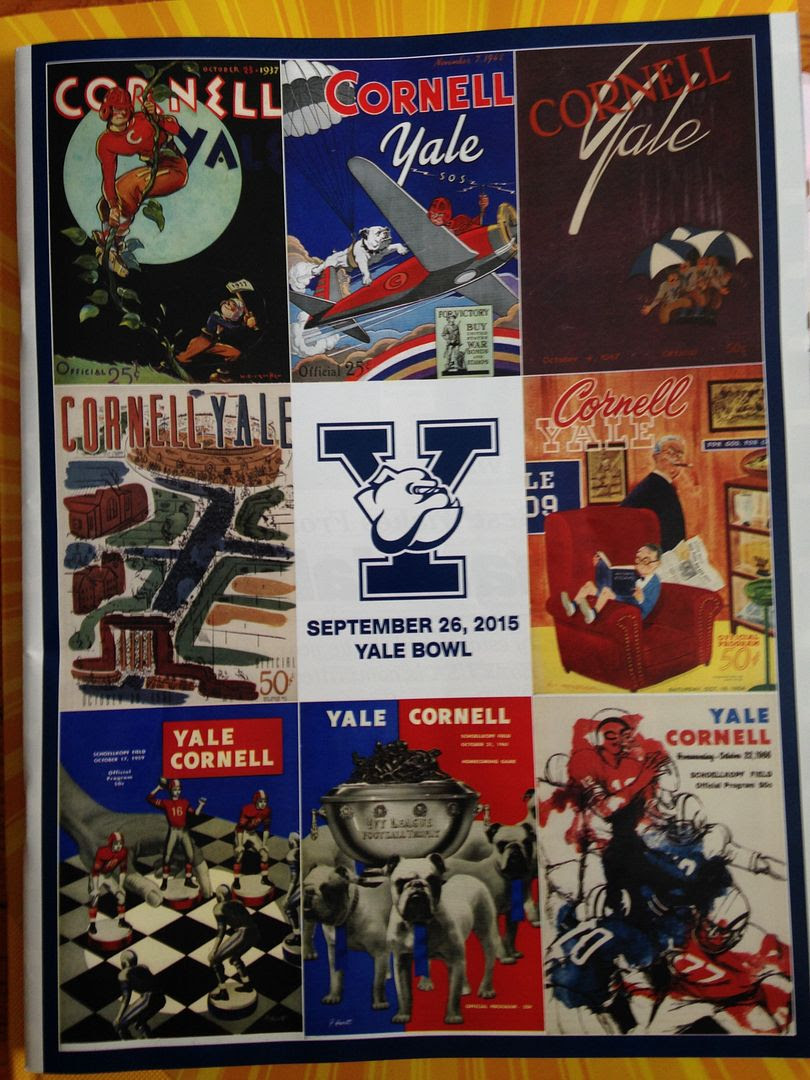