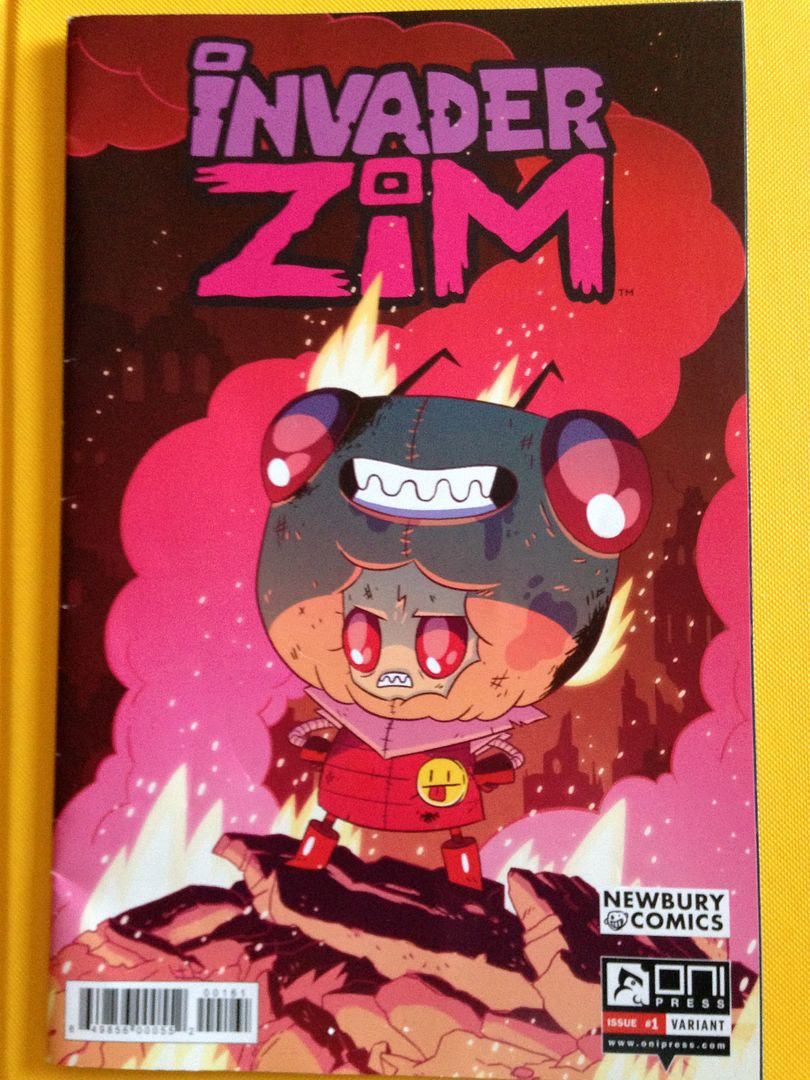 Some months ago, my father, wife, son and I all went up to Massachusetts to book stores.   We've been doing this for years but only recently did I discover that when we go to Raven Books if we walk down the street and to the right a little ways there is a Newbury Comics over there.   This was actually our second time in there and while we looked around at the various novelties they had for sale I couldn't help but notice on the counter, next to the register, was this issue of Invader Zim.    The first one.

Now I knew Invader Zim was getting a comic book series.  I wasn't sure when it was coming out exactly, so seeing it sitting there in the flesh (Does paper have flesh?) made me feel like a little kid again.   Remember before the Internet when we had to find out things by going to the store?  I remember going to the toy store and finding so many stores just sitting there, waiting for me and I never knew they existed before that moment.   Now I'm on the Internet and I go out looking for toys I know I exist, wondering why I can't find them.   It's all backwards.

Anyway, this was an exclusive cover for Newbury Comics which I didn't know at the time was in Connecticut as well, but even in MA this is probably the closest comic book shop to us which would have the exclusive cover unless we went the other way and headed into NYC which I really prefer not to do.    So in some ways it reminded me of being back in Texas because I know that Bedrock City probably got an exclusive cover themselves.   (Side Note: Some time after getting this in MA, we did find the Newbury Comics in the Buckland Hills Mall in CT, which was most pleasing.   It just took a while for me to actually read this and then now to write about it)

"Invader Zim" was one of my favorite cartoons and still remains as such to this day.  I had this girlfriend once, back when it was actually on the air, and she was the one who said I should watch it because it was definitely not for children and yet was stuffed in between other shows and marketed as if it was for children.   It was like "Ren and Stimpy" only, you know, people knew "Ren and Stimpy" were for the older kids (and adults).    When the show came to an end I was sad.   But I wasn't too sad because I just kept watching the same episodes over and over because I'd rather watch "A Room With A Moose" twenty times than a lot of what passes for television these days.

This first issue begins with a brief introduction about the television series- who Zim is, what he's doing, who some other characters are and just that general idea because I guess some people might try and read this without having ever seen the show.   O...K.     When we get into it, the issue picks up as if time has been frozen since the show ended.   Zim has not come out of his house for however many years while Dib has been spying on him, growing fat and smelly from never moving... not even to bathe.

Even though this is the first issue of a series based on a television show which makes it not the first episode it does have this rebirth quality to it as if it is some sort of coming out issue.   Zim returns, ready to start his antics once again.   And Dib has to shower and get back into fighting shape so he can once again try to thwart his foe.    I mean, Invader Zim isn't something that you have mild feelings about.   I don't think I ever met someone who thought "Invader Zim" was just "okay".   You know, either you haven't seen it/didn't like it or you are into it to the point where you welcome the comic book version of Gir just to have a little something else to hold onto.    Really, no amount of reviews will help people buy this or not buy it, but I just wanted to type this to say how glad I am that it is finally back.
Posted by Joshua Macala at 6:26 AM