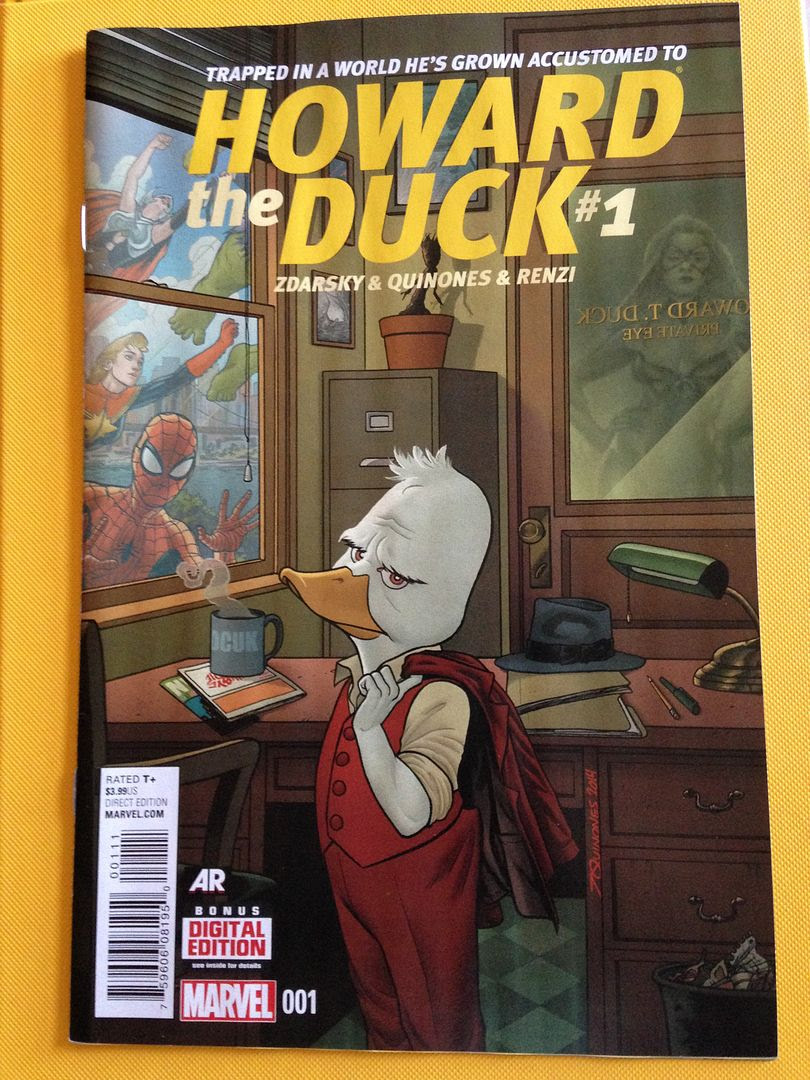 As a kid, I loved Howard the Duck.  I saw the George Lucas movie and fell in love.   I didn't have a Howard the Duck toy back then, so I just pretended Ace Duck from the TMNT line was Howard.   Then back a few years ago when Marvel was at the high of their Legends line they had someone (Was it Silver Surfer?) released with Howard the Duck and though I sold off that particular Marvel Legend figure years ago I kept the Howard the Duck that came with him.   I still own "Howard the Duck" on both DVD and VHS.   If it ever comes out on Blu-Ray I'm sure I will own that as well.    So when we found out that there was a Newbury Comics in Connecticut (Buckland Hills Mall) and their Marvel comics were half price, well, I knew I had to start this series and since my son loves Guardians of the Galaxy I know he'll want to read this one day too.

This first issue seems like it should be an introduction to the main character but I'm kind of glad it's not (Though it does make reference of the George Lucas movie)   Howard the Duck begins this issue in jail and he was is let out so is Tara Tam, who works at a tattoo shop but seems to be sort of like Howard's sidekick.    So Howard the Duck gets put on a mission to retrieve something from the Black Cat but he doesn't know how to find her so we have a guest spot in here from Spider-Man.   Well, then, a Gatherer comes because of course he wants to take Howard to The Collector.   If you remember the "Guardians of the Galaxy" movie you'll remember The Collector and I think that the character is a great way to introduce new characters in GotG2.

Through all of the drama, comedy and making me think I'm watching a 1950's television detective even though he looks like a duck, the first issue ends with Howard the Duck locked up in space jail.   Who does Howard the Duck meet in space jail?   Why, Rocket Raccoon, of course, because apparently these two Universes crossover the most in Marvel.   True, Spider-Man was in this issue but I don't think we'll be seeing him in a Marvel movie any time soon (such as GotG2) so it is kind of strange that I never knew where Howard the Duck quite fit into the Marvel Universe and now it seems to be somewhere with GotG.

I'm excited to see where this goes mainly because I like reading stories about Howard the Duck.   It could just become a vehicle for another GotG storyline, but I'm hoping that a talking duck adds something to it that a talking raccoon does not and, well, the interaction between the two characters of Howard and Rocket has already been worth it to the point where I can only imagine this series getting better by the issue.   I hope at least, because I bought what I could up until the fifth issue so it better not become bad before then at least.   Nah, I'm sure it will be good.  I don't think I could ever stop reading a comic book series about Howard the Duck so long as someone kept making them.