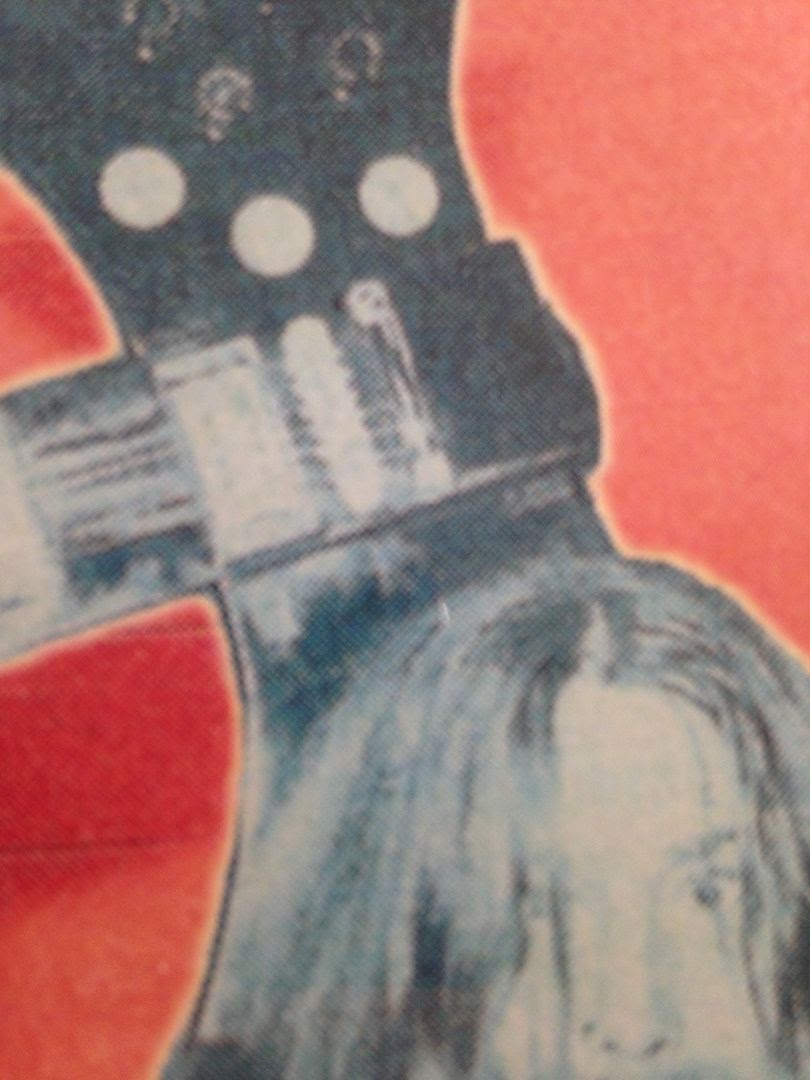 Whenever I get the occasional split CD I like to make note of how I feel like a cassette or record is best when doing the split thing because then each artist takes a side.    In the case of the CD it's hard to tell sometimes when one artist ends and another begins, but you know, for the life of me the only split CD I really remember which has really stuck with me throughout all these years was from the label Jade Tree and Hot Water Music and Alkaline Trio covered each other.   I'm sure many other split CDs exist out there because "splits" were still a thing even when CDs were dominant but that's just always been the one that I've kind of held onto the most for whatever reason.    And now to tell you about music that sounds nothing like either of those two artists.

Frankgoshit is a mad genius.   I've listened to this split CD a number of times now, not sure whether he was indeed smart or idiotic, and the more that I listen to it the more that I see he does indeed seem to know what he's doing and exactly why he's doing it.   Also, if he was creating garbage I probably would have dismissed it after the third or fourth (or tenth) listen and I wouldn't be writing about it, but that goes to show that whenever I typically wonder whether something is good or not it tends to be good.  (I have a way of writing off the bad music within seconds)   In addition to being a play on words perhaps related to Frank Gorshin, the man I will always associate with the Batman villain "The Riddler", Frankgoshit has such a unique sound that I can't even begin to describe it to you.

What starts with screaming and growling has sounds of a harmonica and what appears to be someone typing on a typewriter at the same time.   There are also these background voices, as if while this is all being recorded someone in the background is having a conversation about something, although it mostly sounds one-sided.    The second of his five songs is merely pained screams and crying, while the third brings about the sound of running water, pots and pans clanking around and so I do believe he is in fact doing the dishes during track 3 even though he might be in the shower just as well.   But it still comes with those sort of primal grunts and growls which could be taken as field recordings from the zoo where the gorillas live but I know it's actually him making them because...

This music has had me search Google for anything and everything I can find about Frankgoshit.   He seems to be a part of splits and such here and there more than on the steady releases, but any time he has a track somewhere I'm going to find it and listen to it because this man is brilliant.   In fact, for the first time ever, I have actually found some videos on YouTube when I was searching for more information on him and when one of them said "Fun with a box" of course you know I had to watch that.   I don't think I've ever been so enthusiastic about watching a video relating to a piece of music I've heard before, but here it is if you'd like to experience it as well: https://www.youtube.com/watch?v=jWxQKIgFIqY

Though Frankgoshit makes up the first five tracks of this split CD, Big Fist Johnny is responsible for tracks 6 through 67.    And, no, that is not a typo.    If you're looking for some songs which hit hard, fast and are often times short (under a minute) then Big Fist Johnny is for you.    The songs often open up with "Song number 82" or the such, though the numbers never match the track numbers on the CD so I'm not sure whether they have a meaning or are just random.    There are times though where they will throw out a song title with a number which seems to be legit.

For all of the songs which make up the Big Fist Johnny portion of this split, they aren't all
singing and playing as fast as possible, some are simply weird little instrumental numbers and so you need to go through and hear them all to get the full effect.    With a sound which never sticks around long enough for me to grow tired of, Big Fist Johnny is perhaps the best pairing for the primatecore of Frankgoshit.    These two artists couldn't be more different and yet they are still connected somehow to where they have similarities as well.    Definitely something you should be listening to, if only to first be exposed to Frankgoshit and then to stick around for Big Fist Johnny. 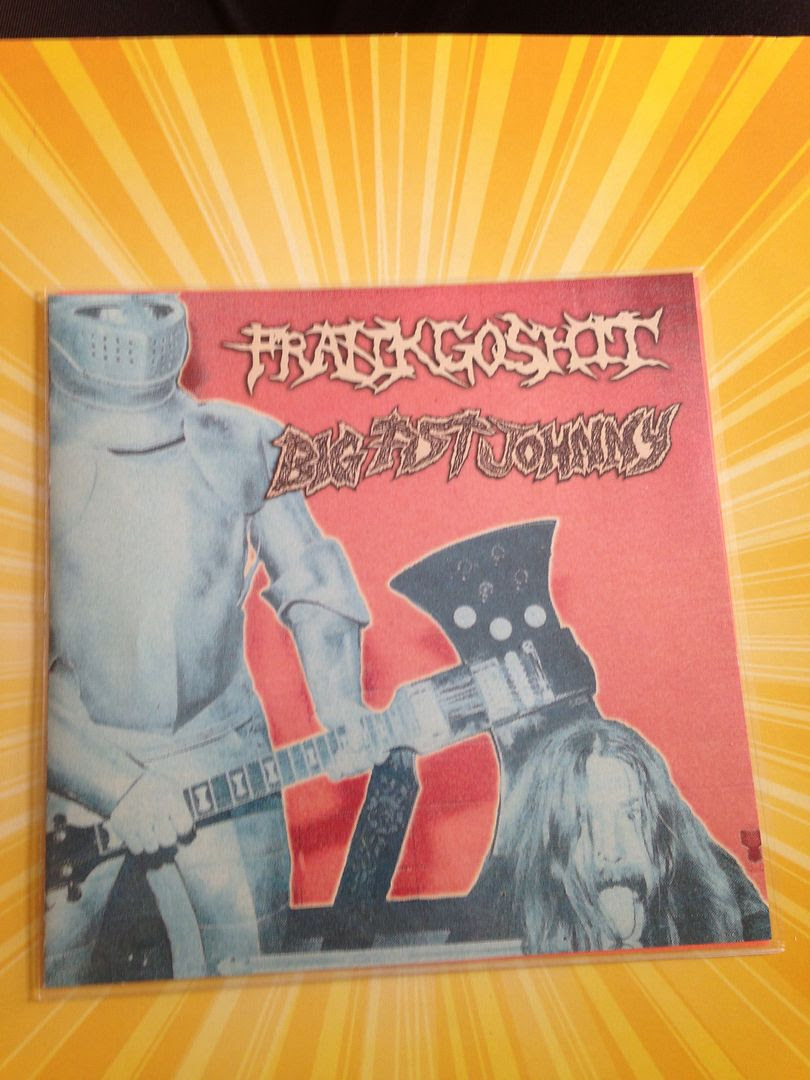 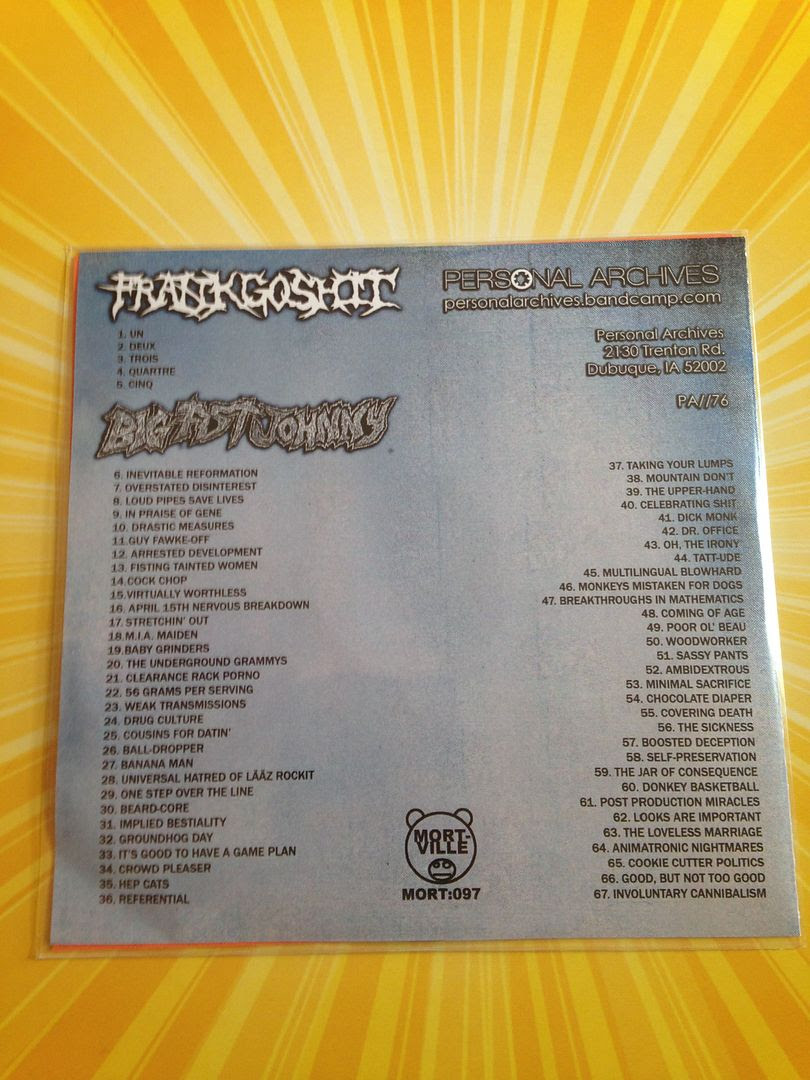 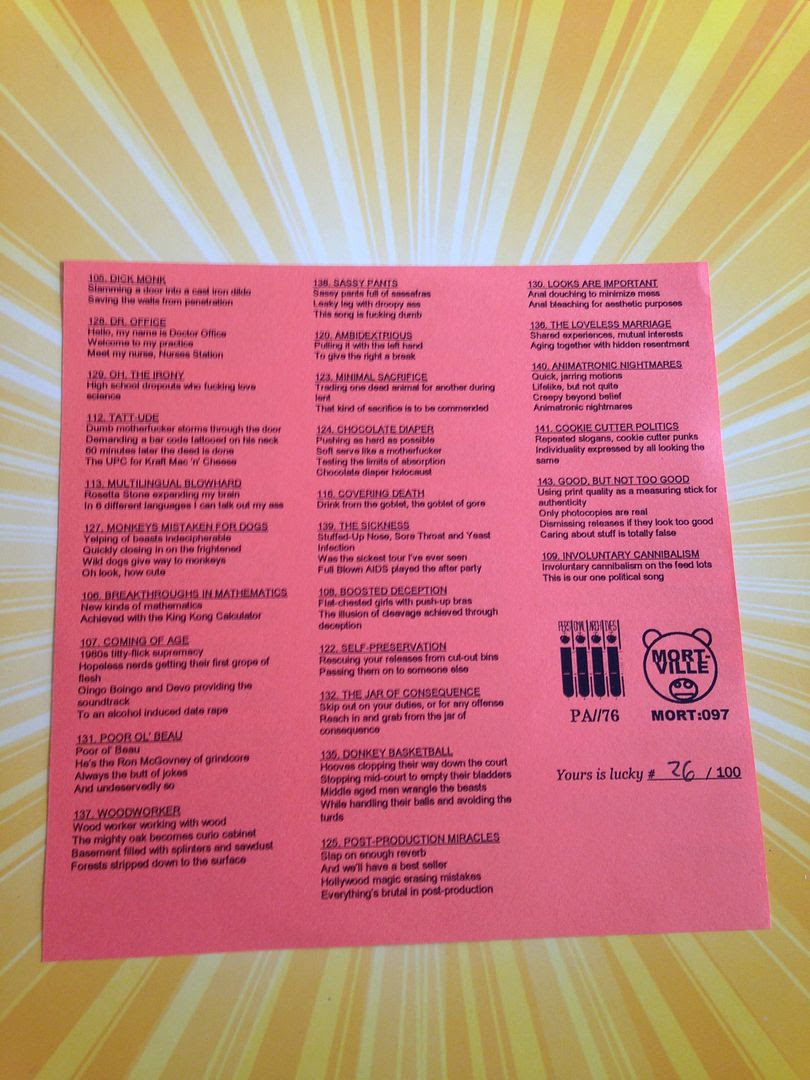 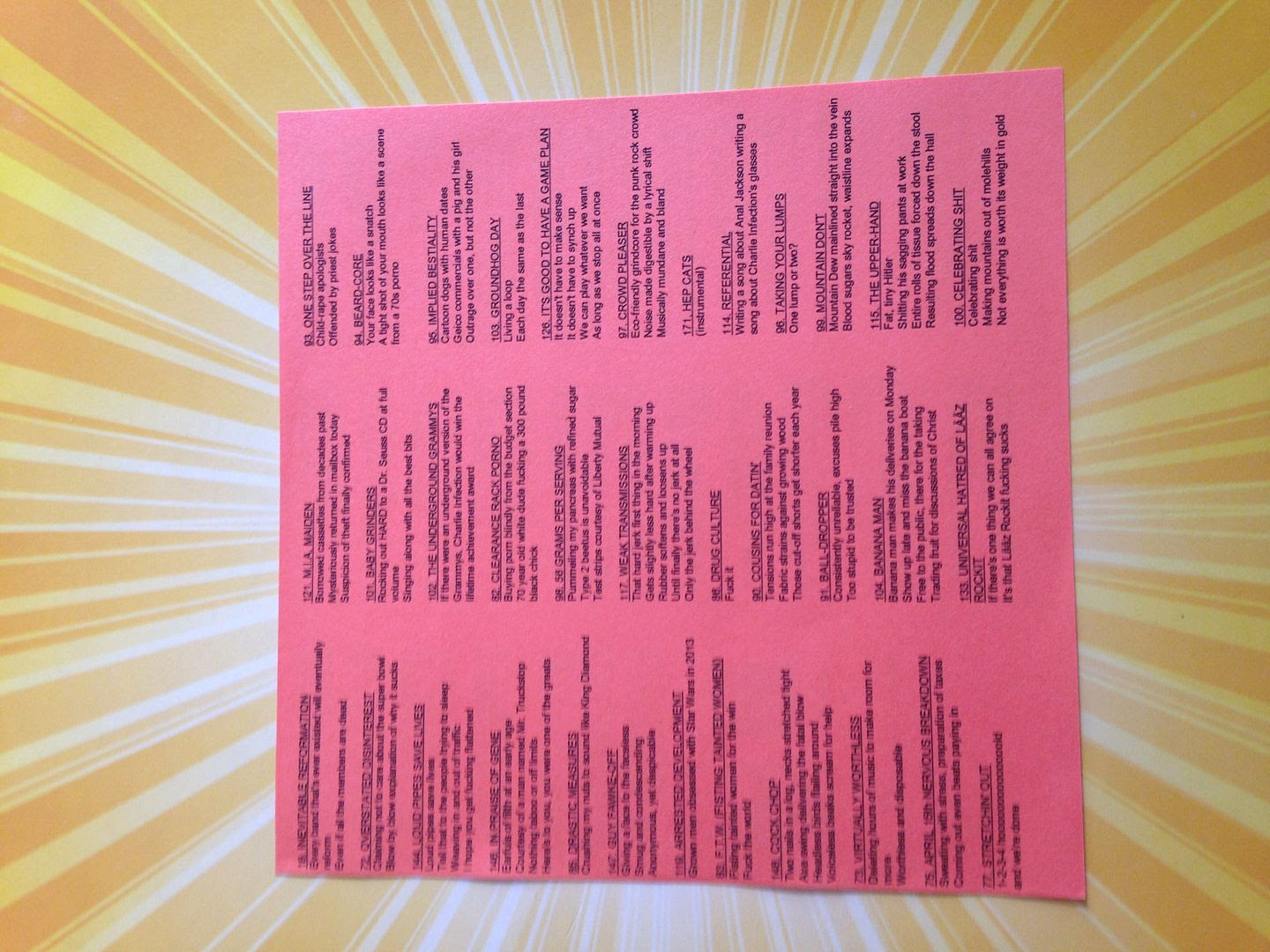 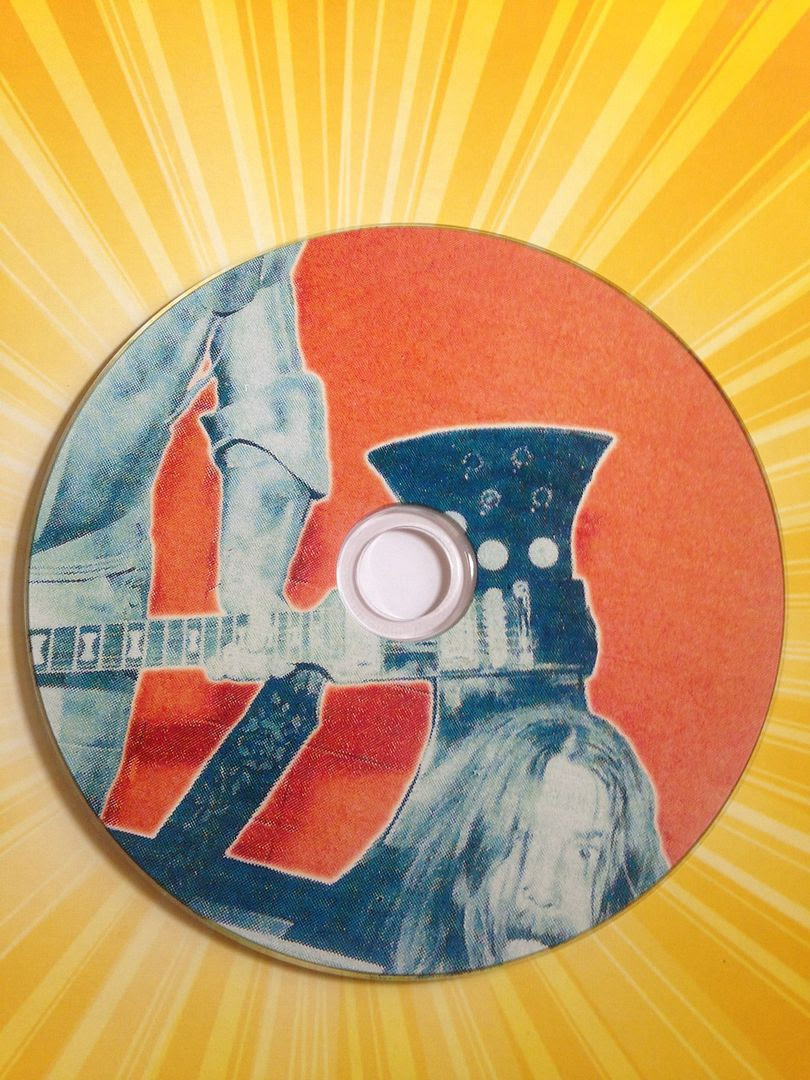 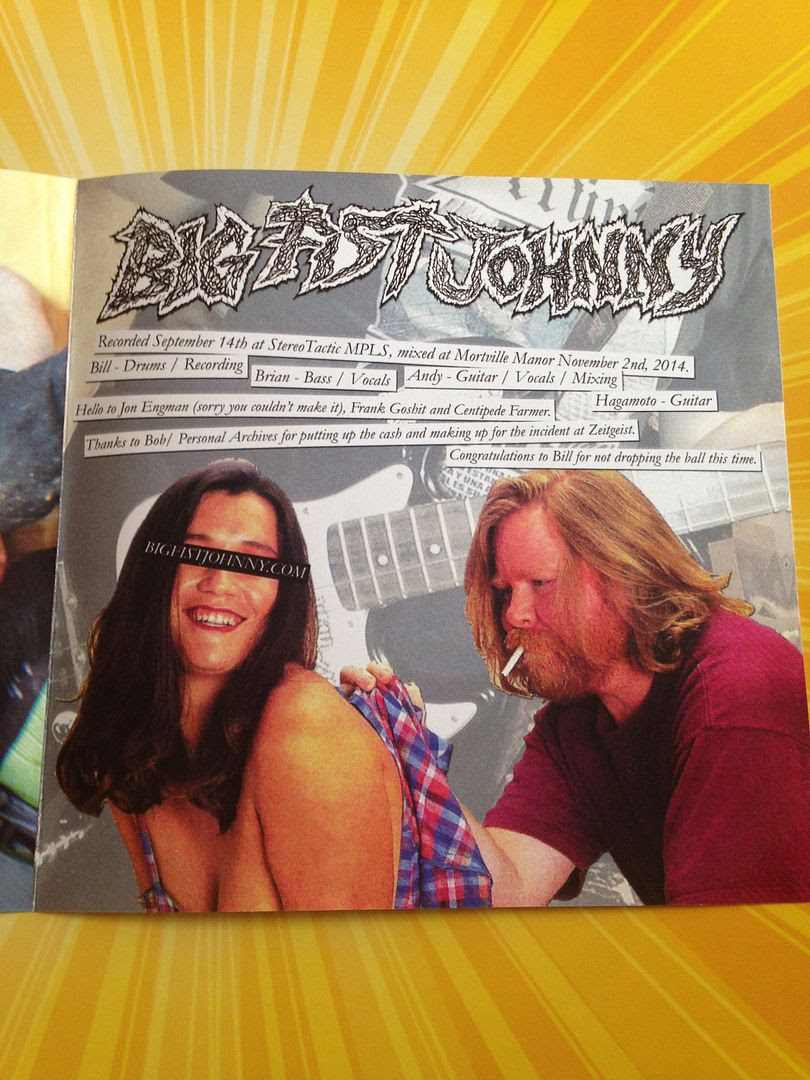 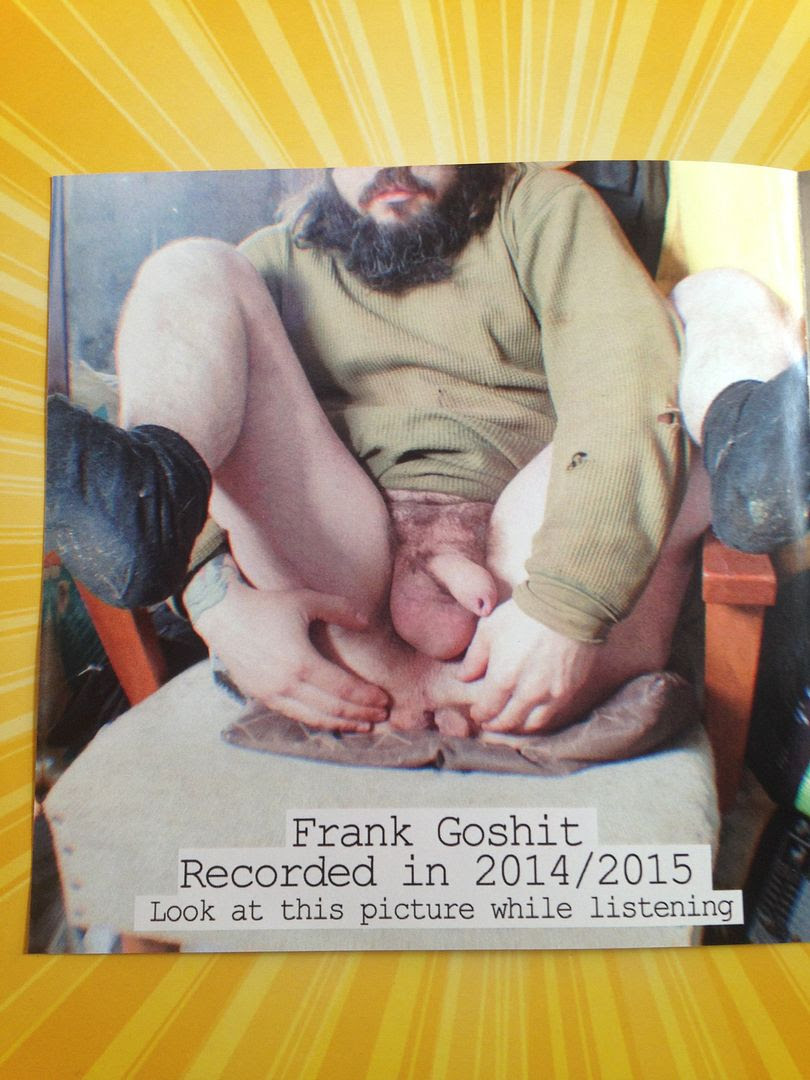