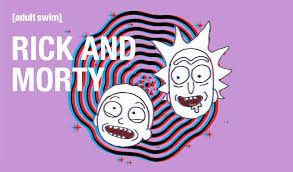 The first time I heard anything about "Rick and Morty" it was only because I saw it listed on a Sunday night on Adult Swim.   When Hulu decided to start putting on more Adult Swim shows this was one of the first I decided I needed to watch and so I did just that.    For those who have not seen it before, "Rick and Morty" is the perfect example of an inappropriately funny show.   There are things within the show which you just should not be laughing at but can't stop yourself from laughing at.    Co-created by Dan "Community" Harmon was one of the reasons I decided to watch this show as well but it's just unlike anything else on television right now or that has ever been on television and thankfully it is also animated.

Morty is a kid who goes on time travelling adventures with his often drunk grandpa Rick.   The names are based loosely upon the "Back to the Future" series (Rick and Morty, Doc and Marty) but it isn't really for kids or "family friendly" at all.    From other timelines to other planets and even just aliens invading Earth, "Rick and Morty" has what every sci-fi fan wants to see but delivers it in such a manner that you will be intrigued by the alien life forms and yet entertained by the comedic value as well.   It might just be me, but I feel like often times shows and movies sacrifice one for the other.   If you're funny than your aliens probably don't seem too realistic.   "Rick and Morty" sacrifices nothing as it brings about the best of both worlds.

"Rick and Morty" is also a nice reflection of our current society.   The oblivious father, trying to be cool and relate to his kids who also remind me of how teenagers act these days.   Aside from the genius grandpa who has crazy inventions in the garage this has quite a bit of accurate social commentary that I find both humorous and disturbing at the same time because, yeah, our culture does seem to be rapidly fizzling out.   Perhaps if you find this series to be a bit crude it is simply because that is how life seems to be now, the socially acceptable side of our existence revealed.

While I have other cartoons to watch, countless "Adventure Time" episodes to watch on repeat and a second season of "Bojack Horseman" waiting for me on Netflix, I would like to one day watch these episodes of "Rick and Morty" again because I do feel as if a lot is going on within each episode and so repeated viewing would bring out things I might have missed the first time around.   Plus, I can start pulling out more amazing quotes such as this: