These are autographs from the Rock Cats as part of their 2015 season which did not appear in the Card Set which was framed (here) and the Ball Case (here) posts. 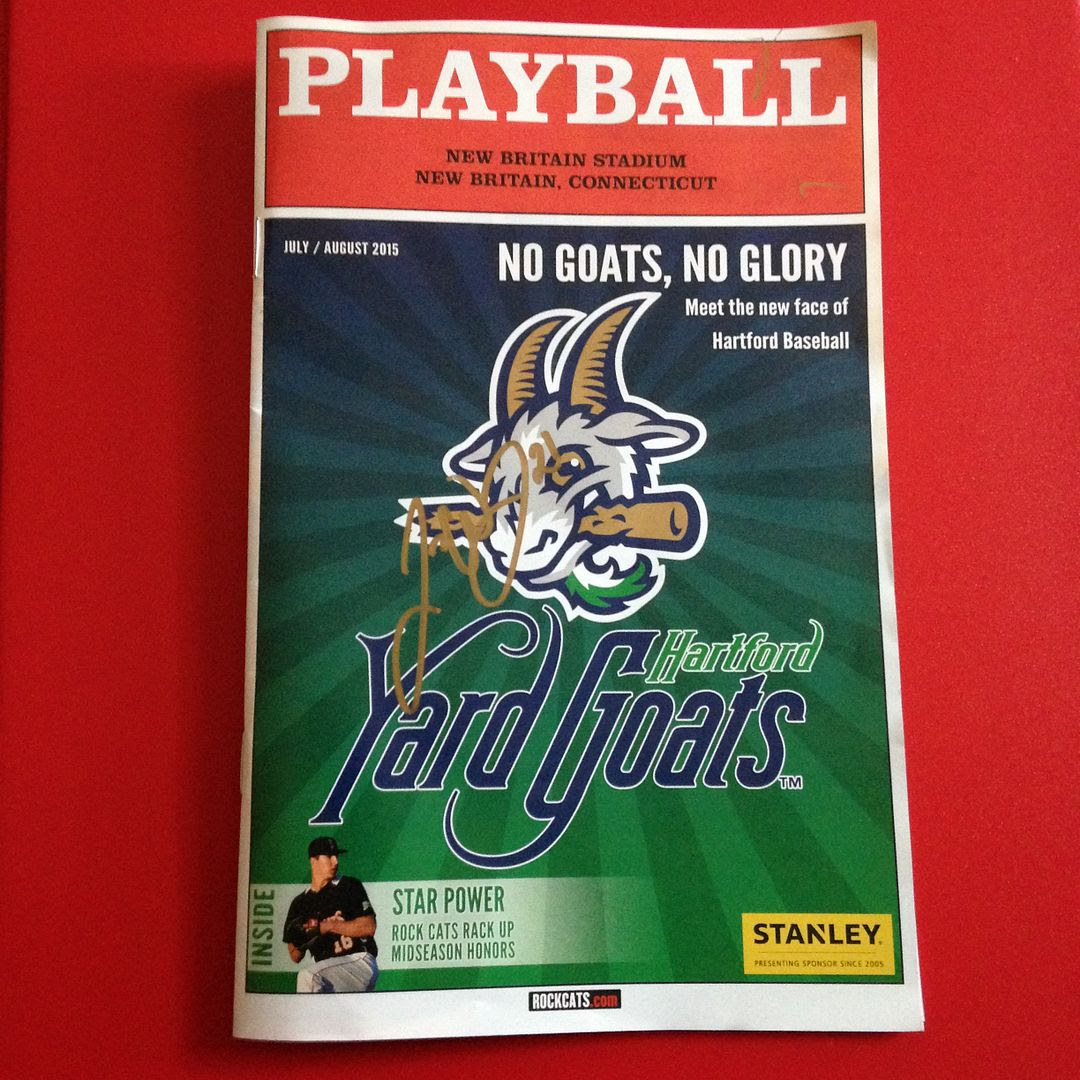 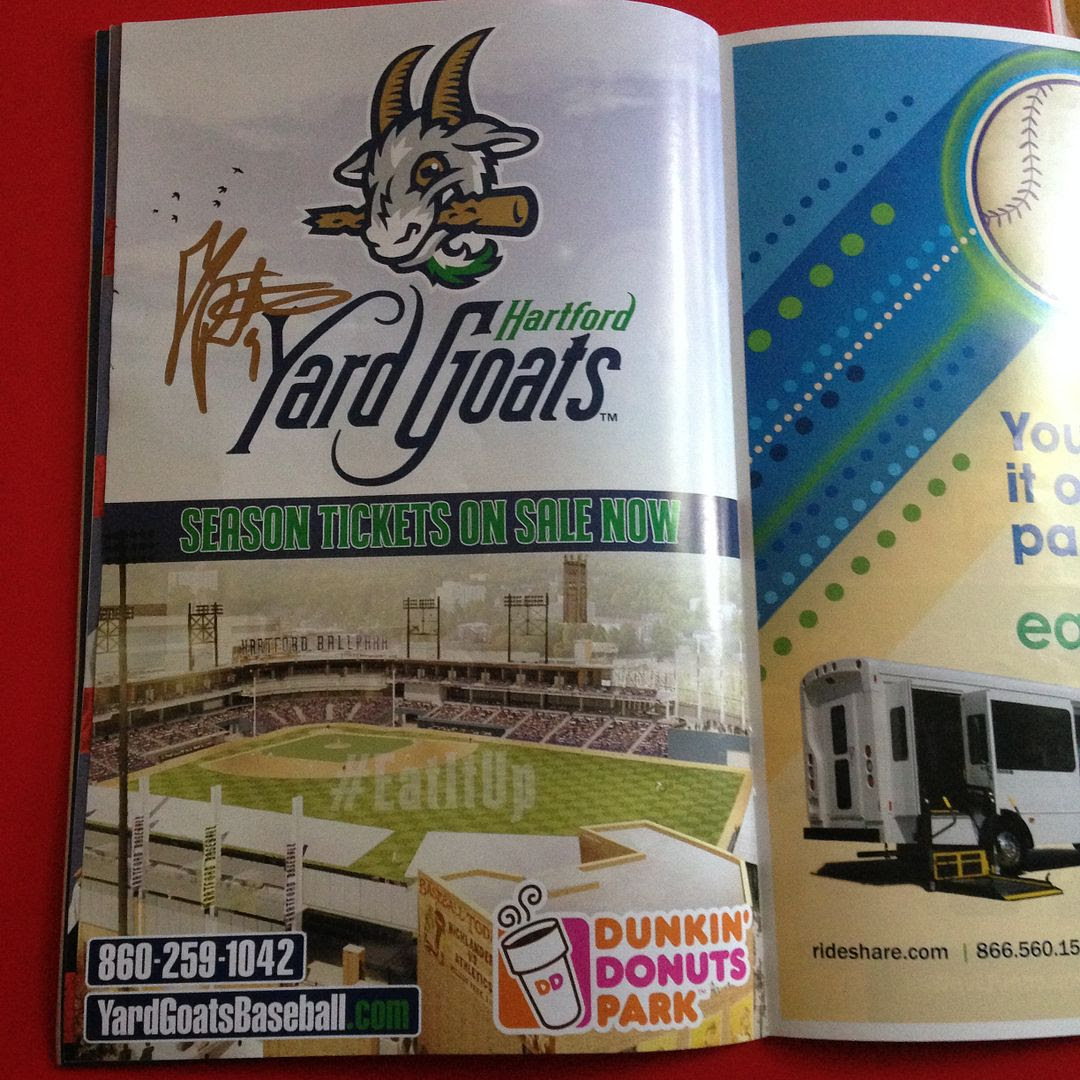 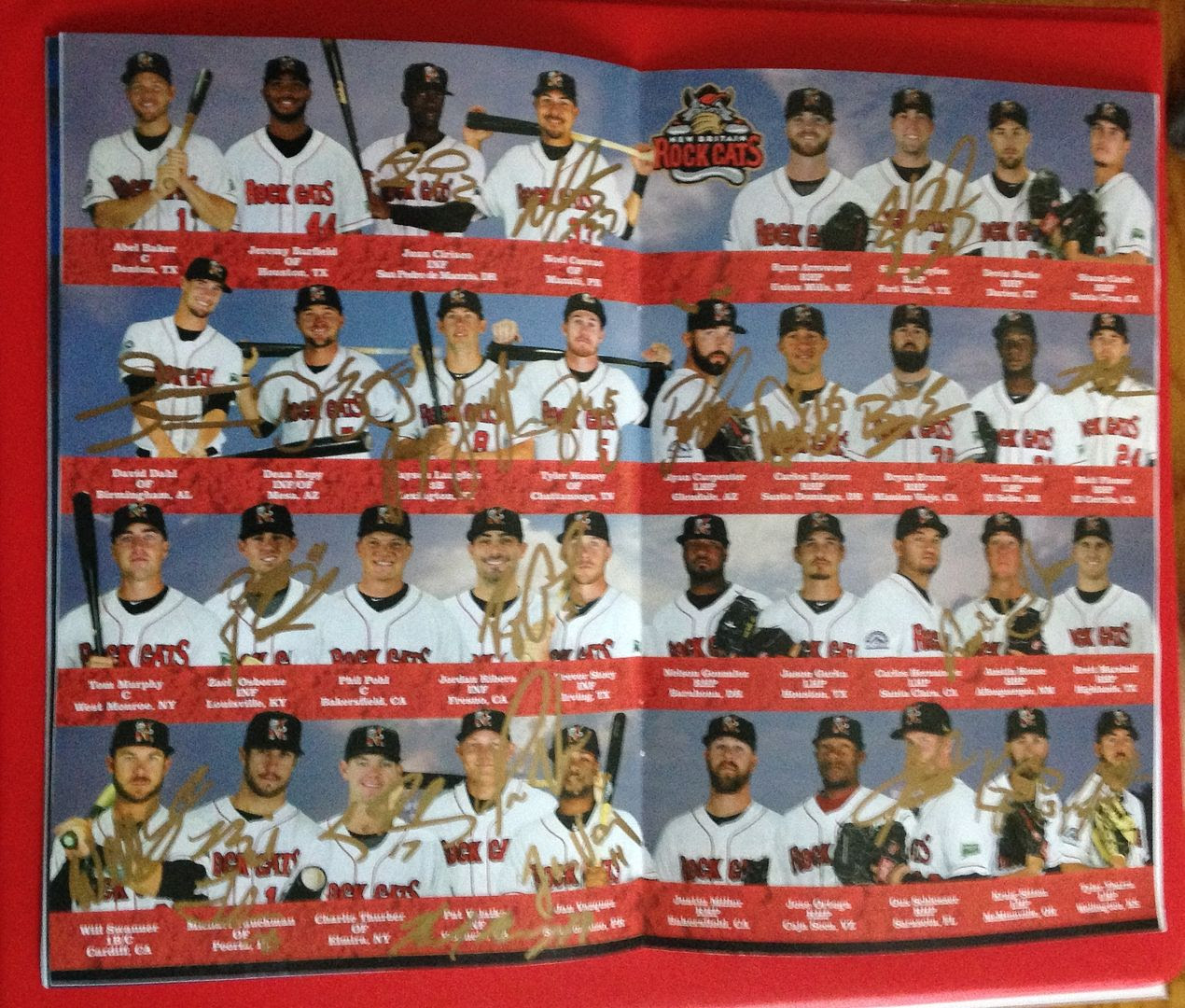 While trying to complete my team set of cards with autographs (waiting on Austin House) Quentin had every Rock Cat he could find sign this program for him.  Since Joey Wong was not in the book we had him sign on the front right over the goat. (First Image)   Jordan Patterson was also not in the book but signed the page behind it because he couldn't refuse Quentin.  (Second Image)  Everyone pretty much signed over their face, but since this book can be a bit hard to read I'll give you the Left to Right of it here:
Top Row - Juan Ciriaco, Noel Cuevas, Shane Boyles
Second Row - David Dahl, Dean Espy, Jason Langfels, Tyler Massey, Ryan Carpenter, Carlos Estevez, Bryan Evans, Matt Flemer
Third Row - Zach Osborne, Ryan Arrowood (signed over Jordan Ribera and Trevor Story), Austin House
Fourth Row - Will Swanner, Mike Tauchman, Charlie Thurber, Pat Valaika, Jan Vazquez, Harrison Musgrave (signed underneath Valaika and Vazquez), Gus Schlosser, Kraig Sitton, Tyler Ybarra 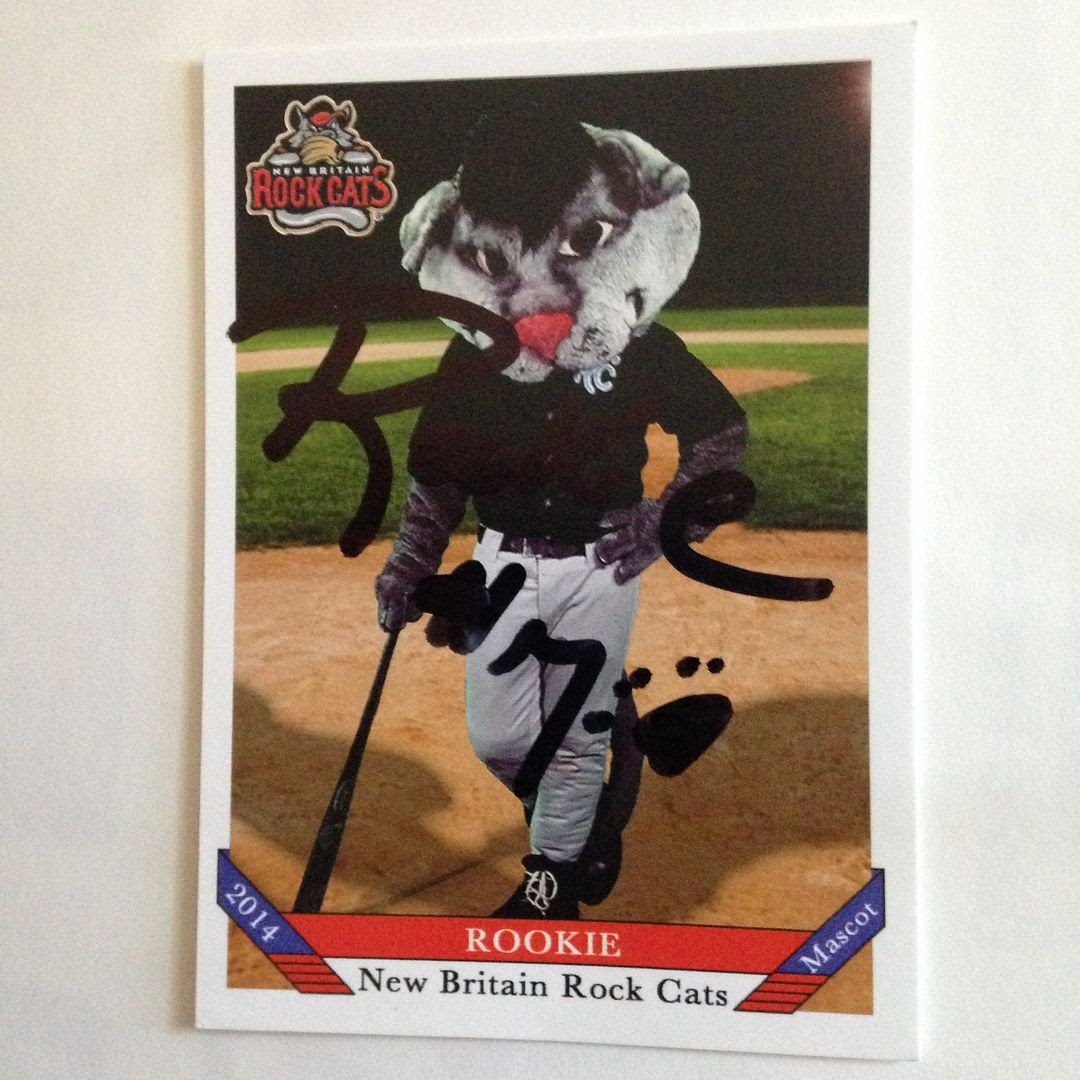 This card was actually in the 2014 set as no mascot was in the 2015 set (I would have preferred at least Rocky over the coaches, but whatever)   We had Rookie sign it at the game which was Rocky's Birthday Party because we knew we'd see him there but wasn't sure about the other games as he sometimes comes out and other times doesn't.  He seemed rather excited when Quentin presented him his card to sign. 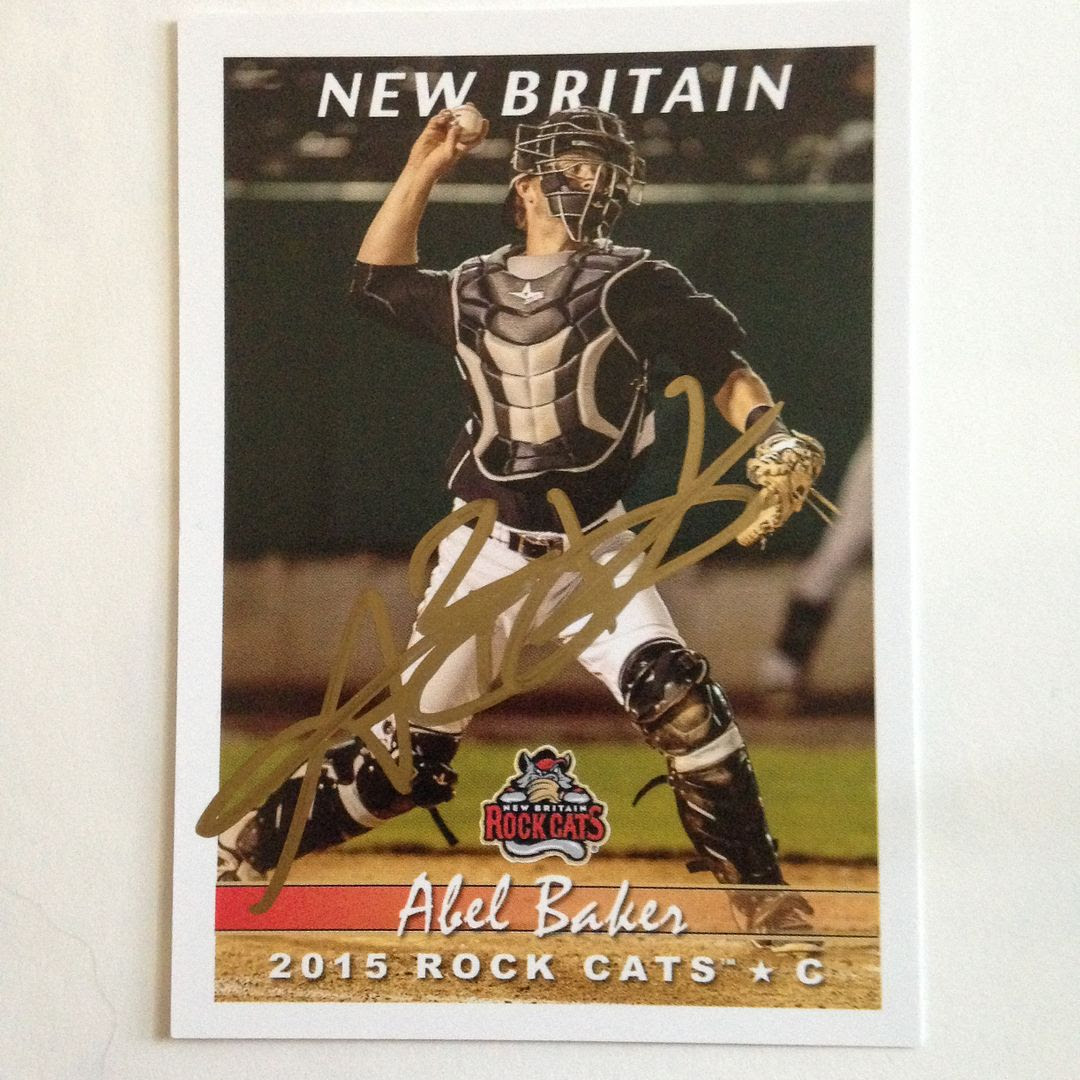 For those who don't know, the story with Abel Baker is that he was on the Rock Cats earlier this season and then by the time that the team set of cards came out he was moved up to Triple A.   He was one of the few players not on the team when the set came out, which was sad, but just as I had completed the signing of the team set he was moved back down and I had one more card left to get signed. 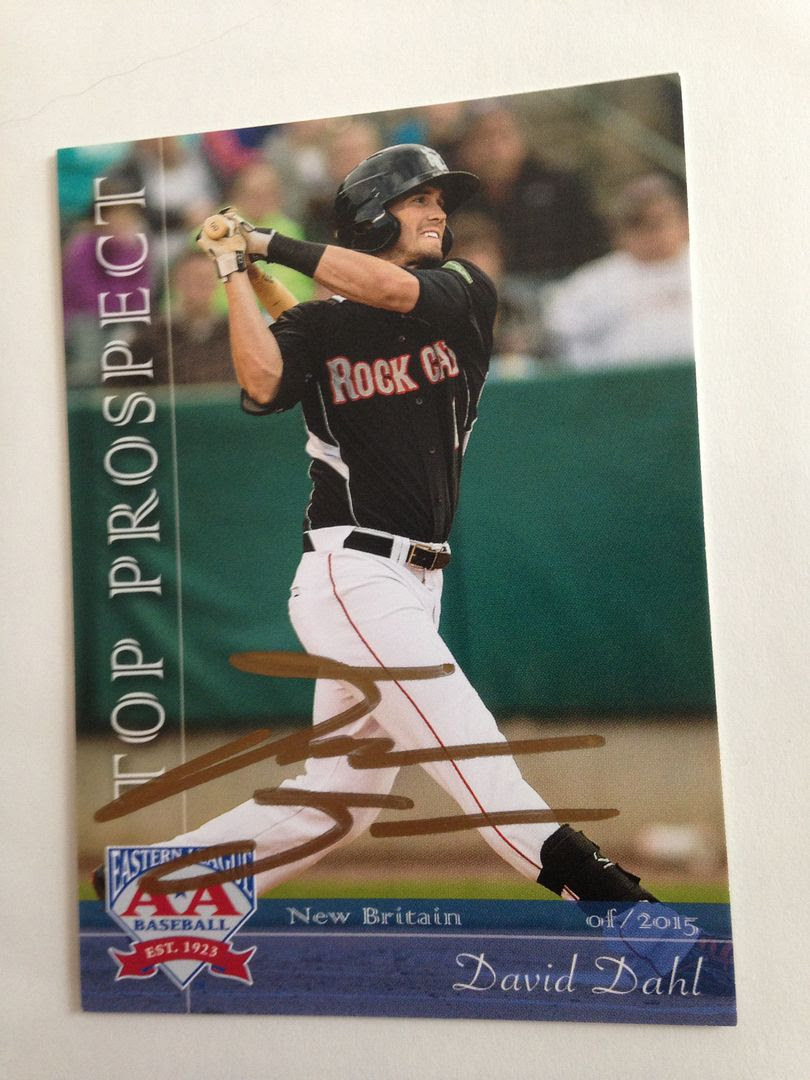 This is the Top Prospects card for David Dahl.  Yes, we have four different autographs from David Dahl- two cards, a baseball and The Playbill.   This card is not in the frame with the others simply because his card from the team set is in there instead and I didn't feel it was fair to have two cards of the same player in there since space was already limited. 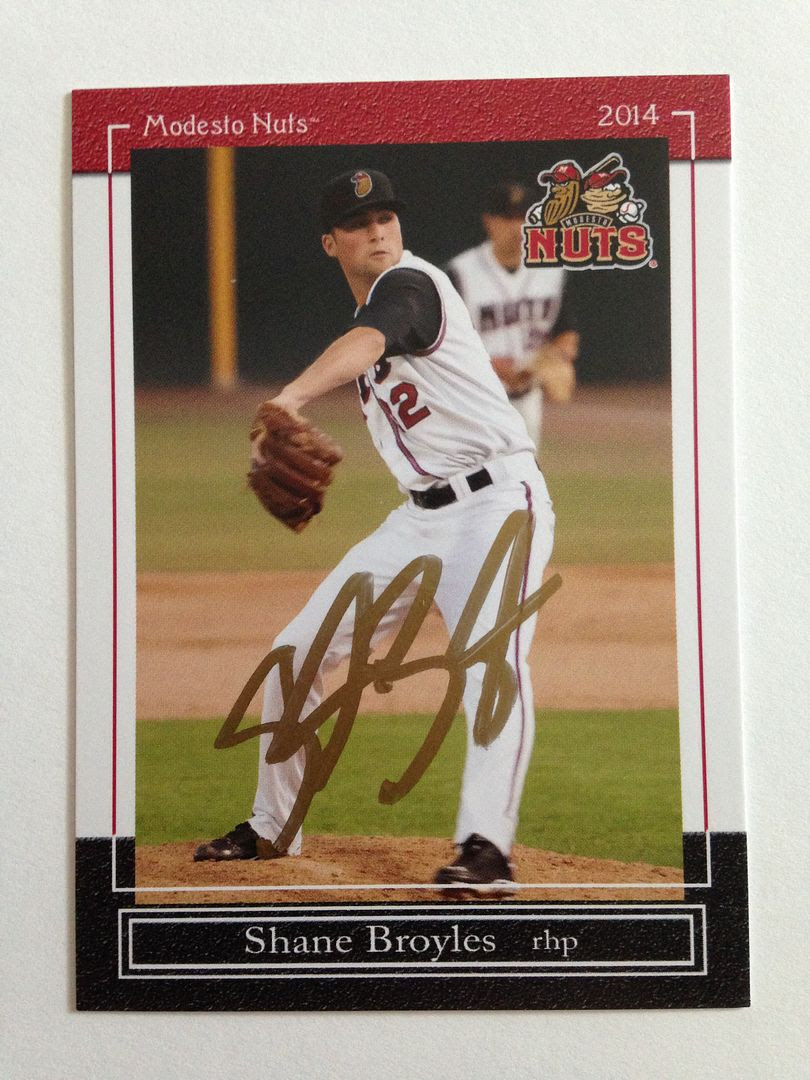 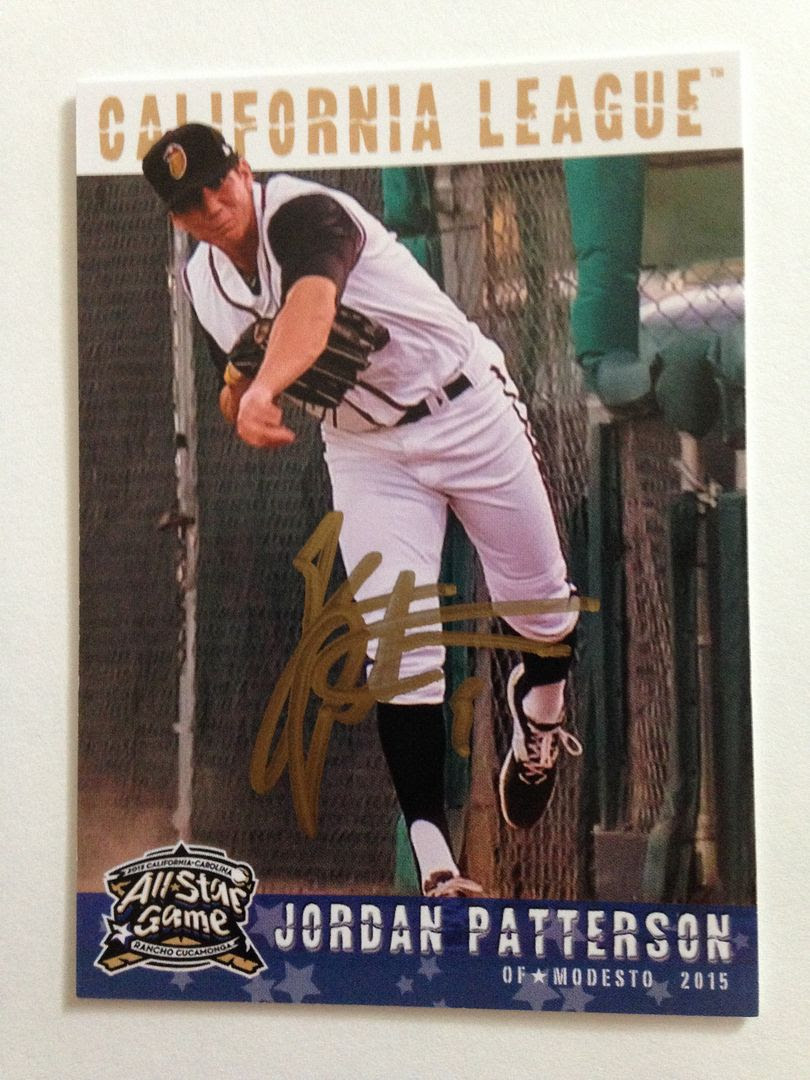 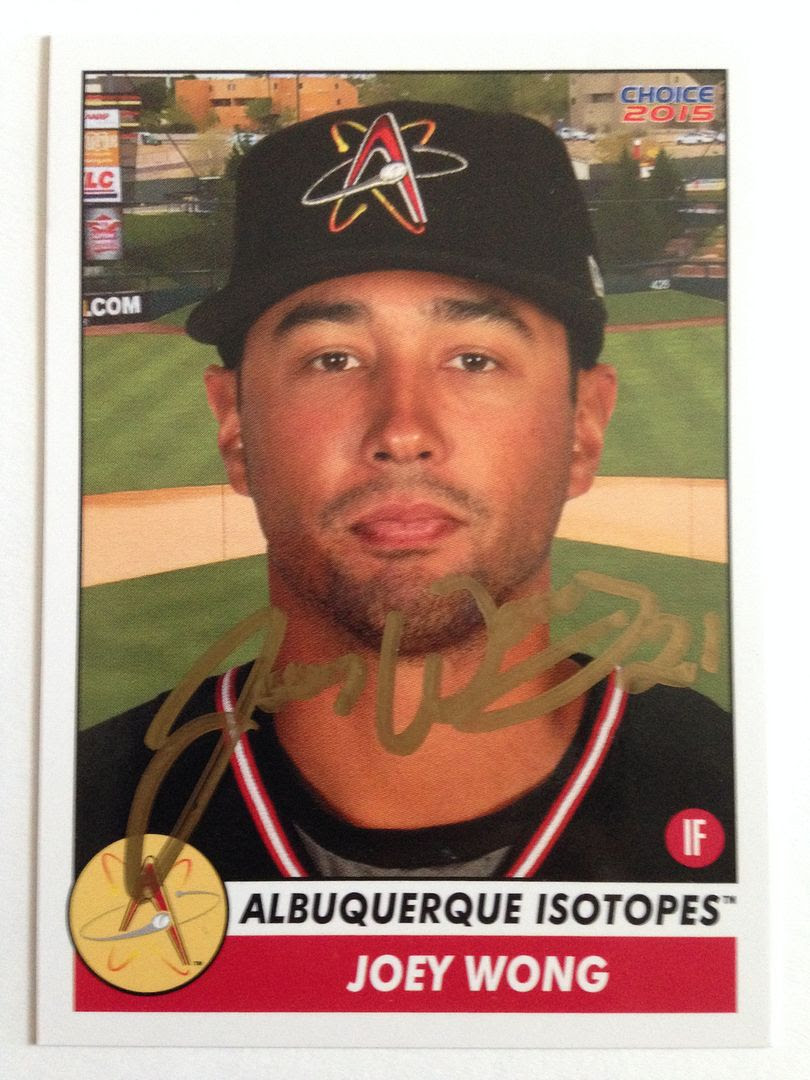 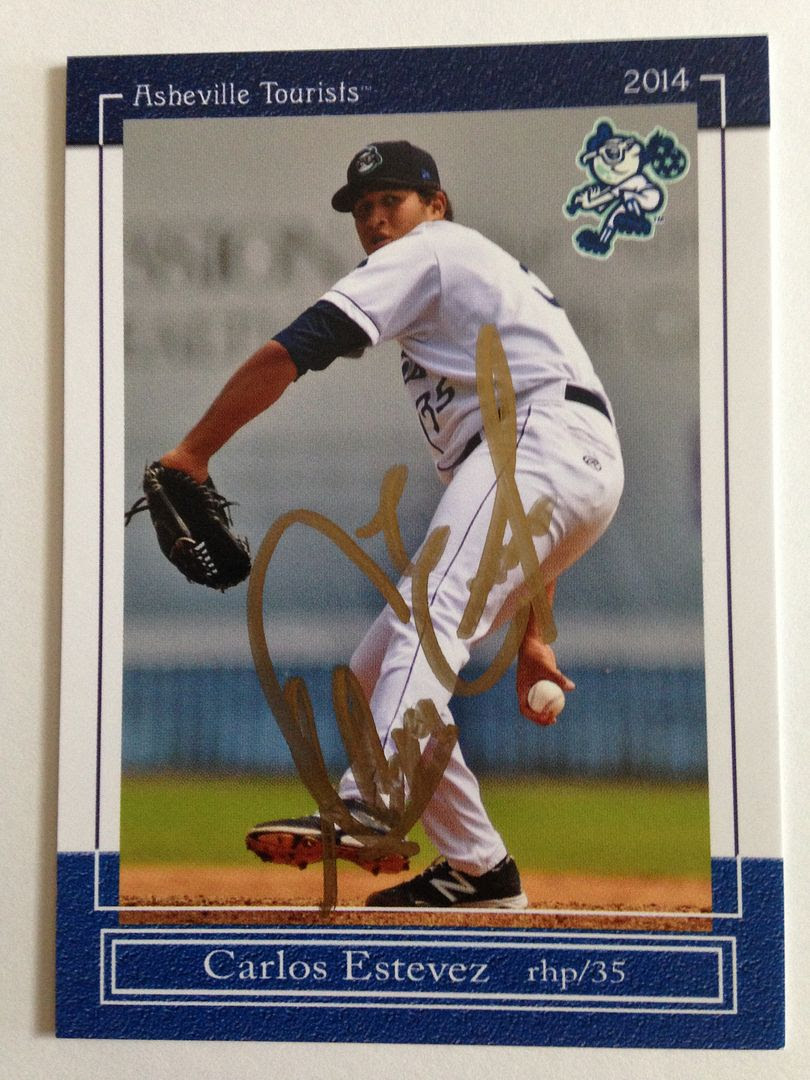 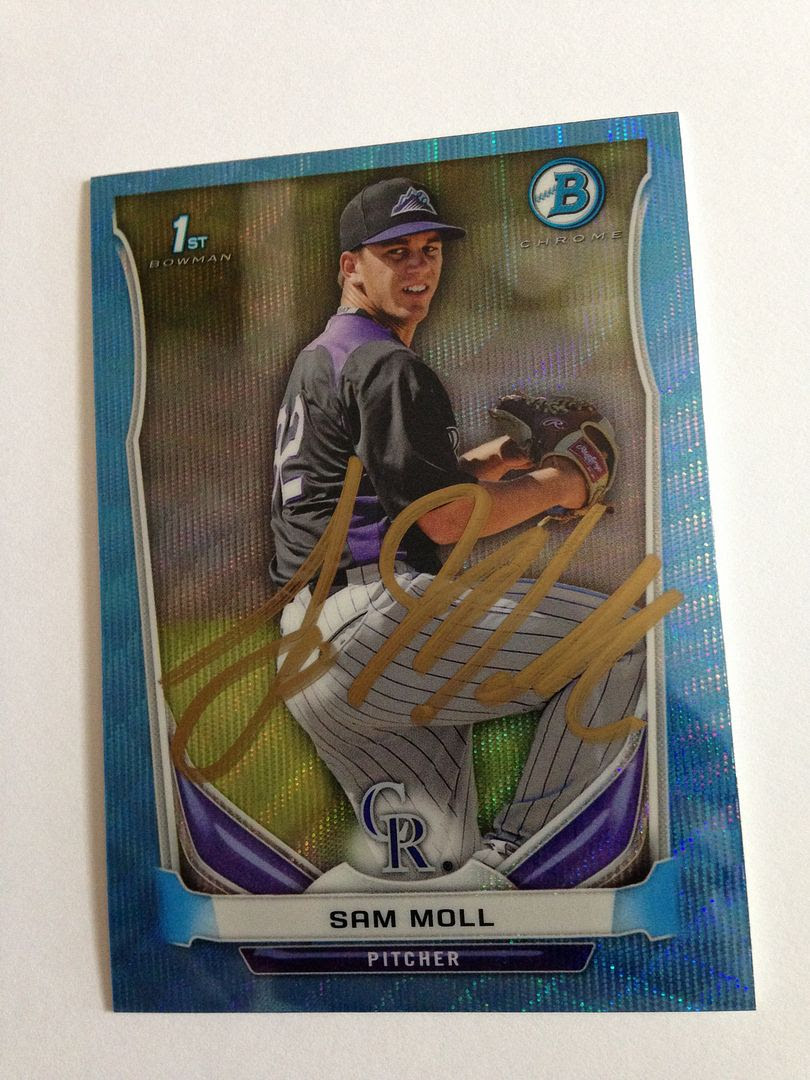 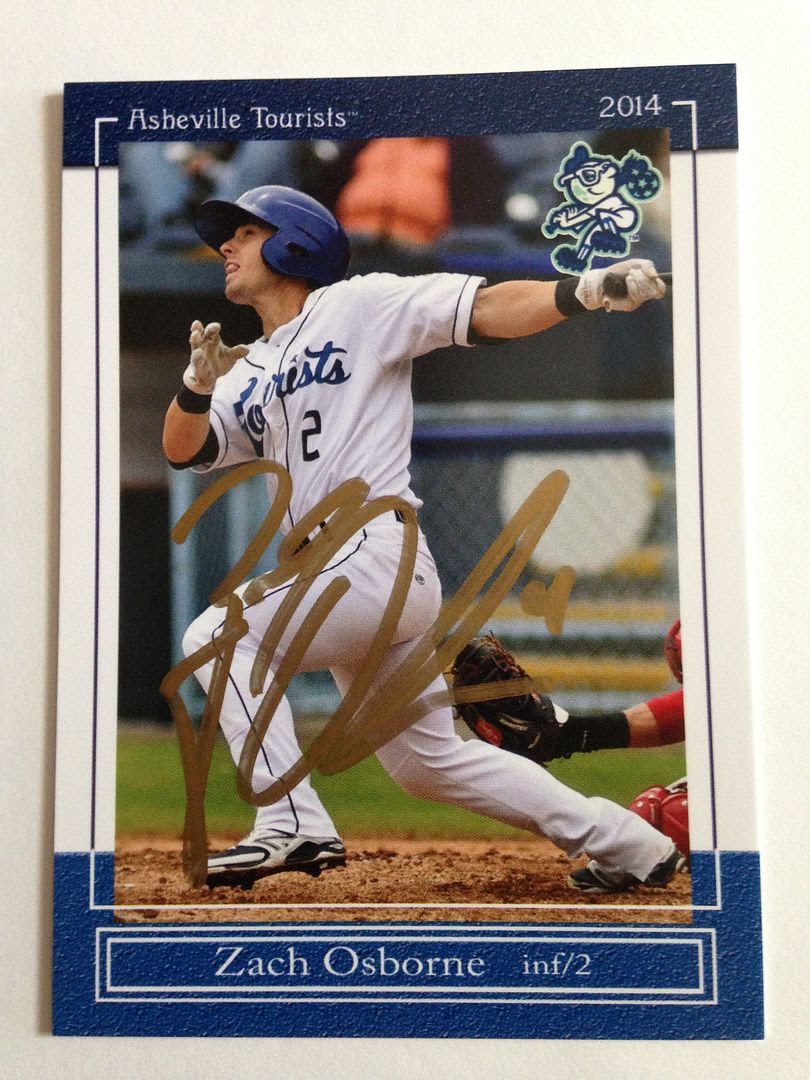 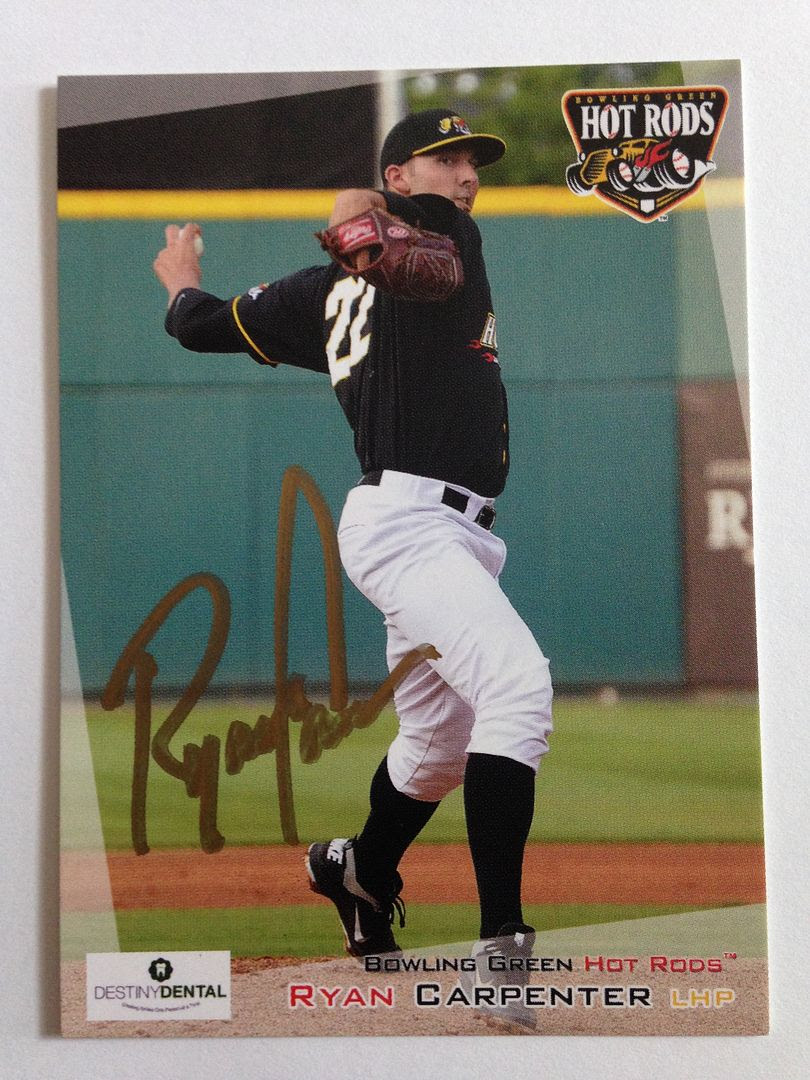 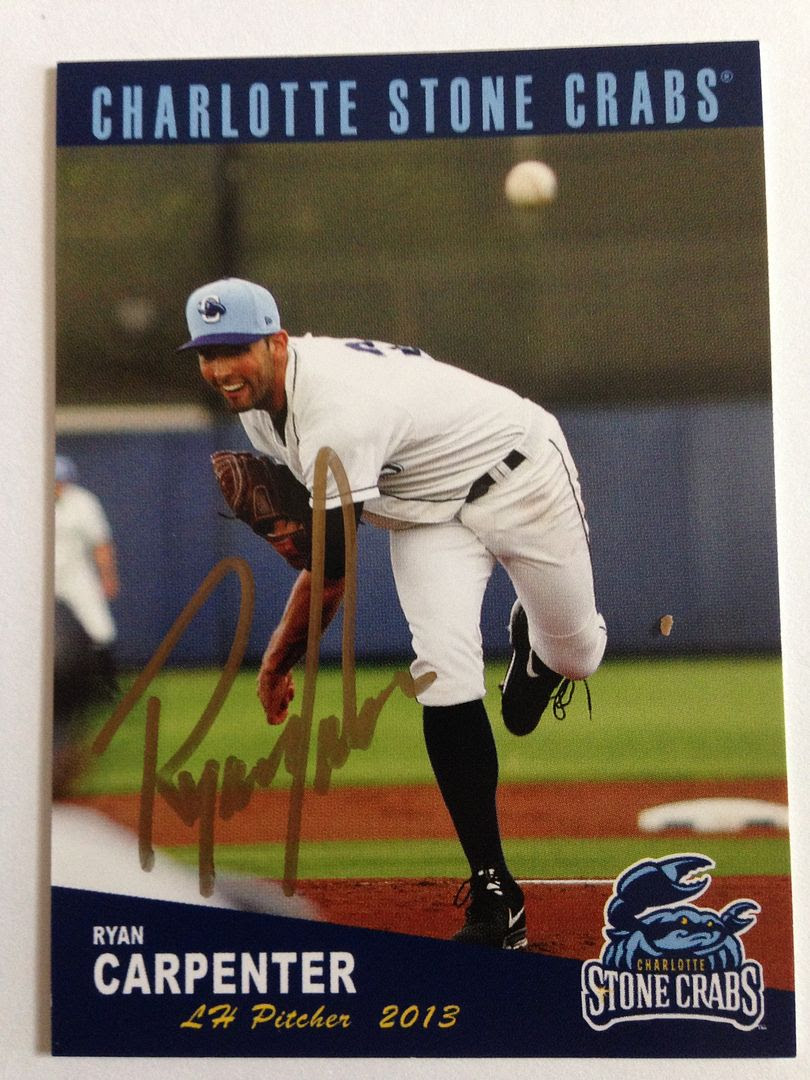 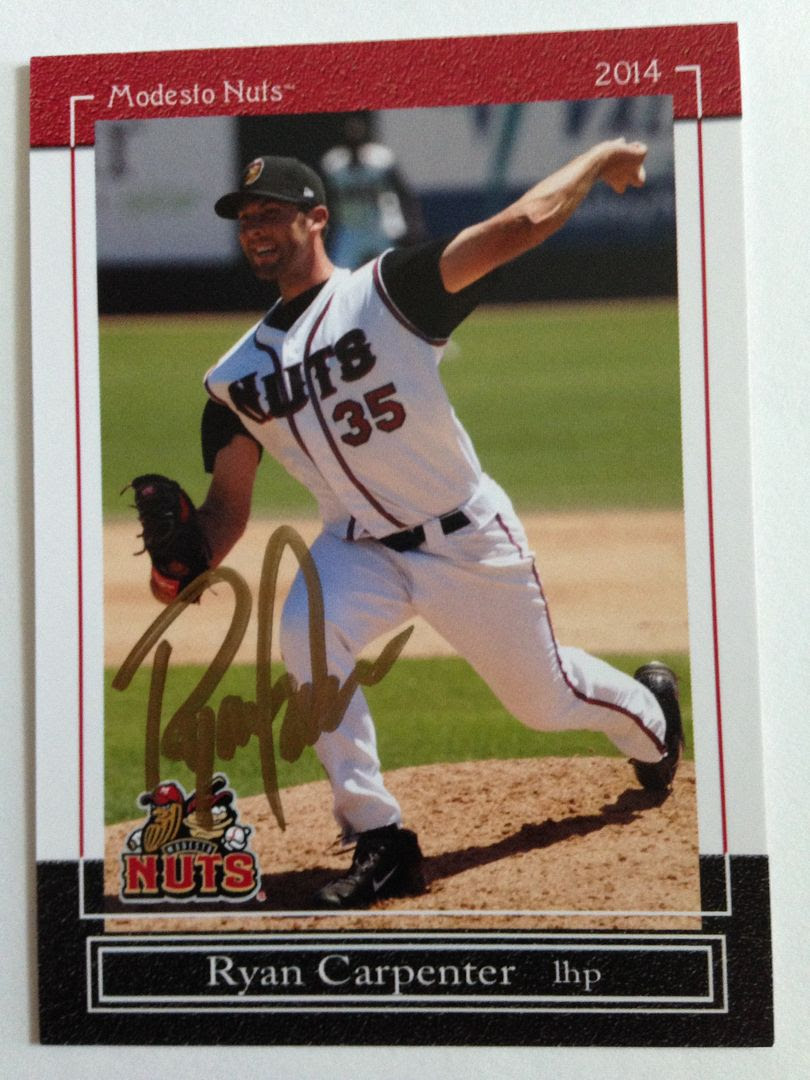 This card is also from the 8/25/15 game but it is home made for Harrison Musgrave, 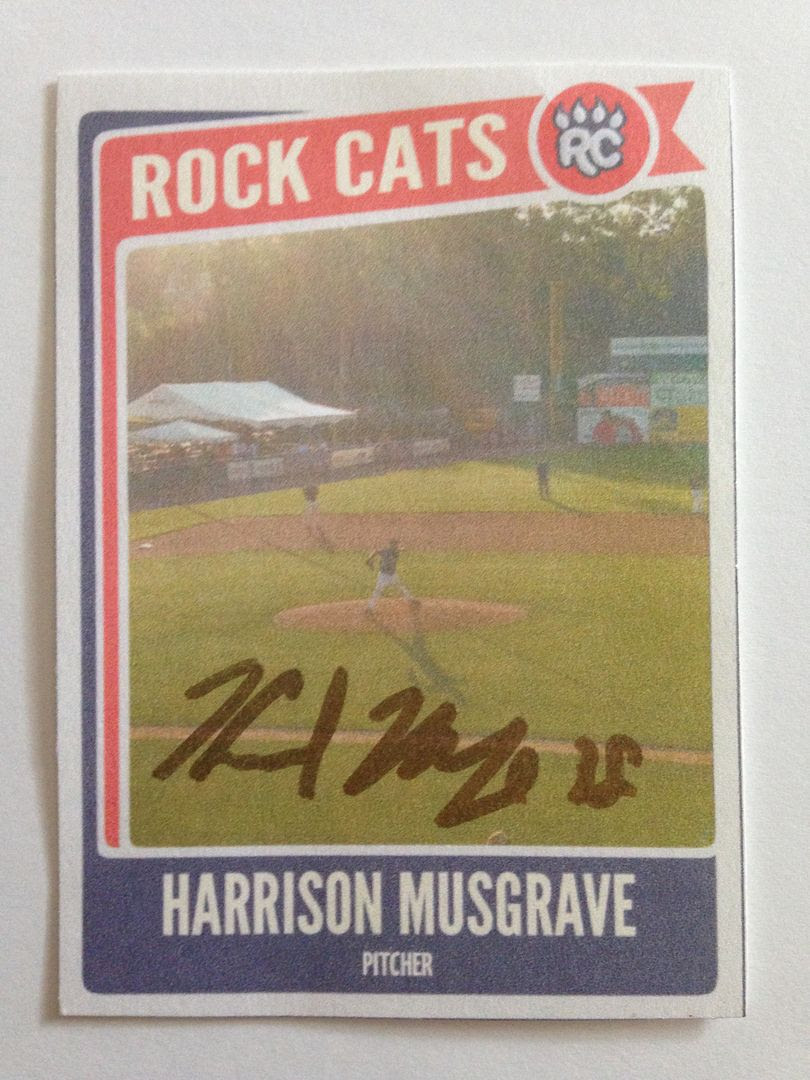