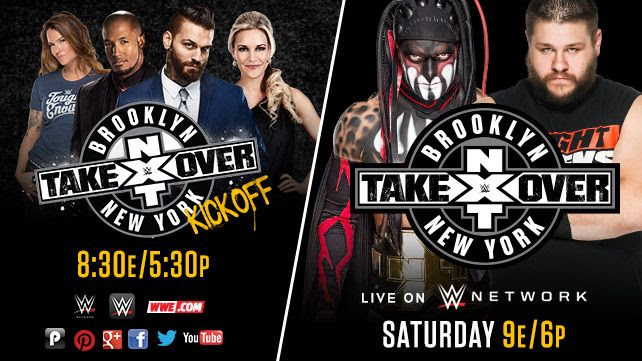 I always thought I could get by without the WWE Network by watching NXT on Hulu.   As it turns out, this special will likely not be replayed on Hulu- I think- and so thus the WWE Network becomes something I must have so that I can see this.    WWE has essentially done what I've challenged them to do and that is make their Network something that I needed.    Since we recently purchased a Blu-Ray player as our old DVD player went bye-bye, we can now stream the WWE Network to our television as well and that does make a big difference for me.    The theme of this show though- and the weekend in general- is that WWE is going to be putting on a show Saturday night with high expectations and then they are going to have to attempt to outdo that show the next night which just doesn't seem as likely.

For those who are unfamiliar with the former Uhaa Nation go watch some of his matches in Dragon Gate or just watch whoever he beats in his debut here.    The man can do a standing moonsault and though I've typed before I'll type it again- he is the build of a Titus O'Neil but with the high flying capabilities of someone such as Evan Bourne/Matt Sydal.    In my opinion, Apollo Crews could be the first African-American man to hold the WWE Championship once he makes it to the main roster because he has all of those facets in terms of looks, charisma, etc. that someone like Ahmed Johnson had back in the day and yet he doesn't seem like he will be injured nearly as much and he also has more than just the power moves in his arsenal.    Watching Apollo Crews in action is going to be great and it only leaves me excited for the future of both NXT and WWE.

Remember when Baron Corbin had that feud with Bull Dempsey?   Look at where Bull is now and hope that Samoa Joe doesn't end up somewhere similarly.    There is only one way for this match to end and that is with a Samoa Joe victory.   Some may say that Samoa Joe is the veteran and in a sense he's like Rhyno where he should be coming in here to help put over the newer talents like Baron Corbin.   I don't see it that way though because Samoa Joe is on the same journey to the main roster as Baron Corbin only Samoa Joe hasn't had and doesn't need the same speed bumps that are plaguing Corbin.    With this win, Samoa Joe will be closer in line to a shot at the NXT Title and then eventually going up to the main roster.    The loss will also hopefully send Baron Corbin somewhere to be off of television for a while so that he can be given a new character as the one he has now clearly isn't working and hasn't been working for some time.    Losing to Samoa Joe and being re-branded, if you will, could be the best thing to happen to Baron Corbin right now and thus it becomes a win-win all around.

The very fact that WWE got Jushin Liger to appear on an NXT show is a big deal.   Forget about the fact that it takes away from ROH and NJPW and all of that, but just the fact that he's here in NXT is a big deal.    It gives you that idea that anything can happen in NXT and I'm not just talking about guys who have debuted like Kevin Owens and Samoa Joe or those guys who have had spots here and there like Rhyno and Brian Kendrick, but the fact that Jushin "Thunder" Liger is here does make it feel like anything can happen in NXT.    This is the closest I've ever felt to that old school ECW vibe in quite some time and I love it.     While a great match is expected there is no reason for Jushin "Thunder" Liger to lose as Tyler Breeze will get enough rub just by being in the same ring as him.   Plain and simple, soak in the moment while it lasts because it's going to be amazing and keep me on the edge of my seat the entire time.  I. Am. So. Excited.

The Vaudevillains lost their chance to win the tag titles recently because of interference by Alexa Bliss.   I'm still not sold on Blake & Murphy as a tag team, but the fact that they won the first match is okay because it was at a taping and I'd rather not have titles change hands when taped.    This is going to be live though and so now The Vaudevillains can win it when it counts.   If you look back at the history of the NXT Tag Team Titles, they were dropped by the Lucha Dragons- who went up to the main roster- and when it seemed like The Vaudevillains would have taken them then it didn't happen for some reason.   I don't know what that reason was, but putting the titles on Blake & Murphy felt rushed and they always kind of felt like placeholders until the Vaudevillains figured out whatever was going on with them (It almost seemed as if one of them had an injury)  So, yes, I do believe that the Vaudevillains should and will win this match as they have something up their sleeve to thwart Alexa Bliss.   On Twitter I made a joke that their secret weapon would be Bill Cosby, but in reality I have no idea what they've got planned so, here's to surprises!

This seems pretty easy to predict, right?   Sasha Banks is on Raw and Smack Down! now, so let her be up on the main roster going for the WWE Divas Championship and have Bayley become the NXT Women's Champion and defend the title in NXT against the new group of women coming through.   I think this show should serve that sort of purpose where we not only see Sasha Banks but Becky Lynch, Charlotte and Kevin Owens make the full transition to the main roster and stop appearing in NXT so that the newer talents can take the spotlight.    For a lot of people, Sami Zayn winning the NXT Title was emotional as he was supposed to be the underdog and all of that and I never got that emotionally invested in Sami Zayn.   But, for me, Bayley winning the NXT Women's Title is that big of a deal.   I'm not saying that they wouldn't keep the title on Sasha Banks because she's on the main roster now, but I'm saying that I want Bayley to win regardless of what Sasha Banks is doing.   Sasha Banks hasn't held the title that long, but she can go onto bigger things on the main roster and Bayley can be the leader among a new crop of females which includes Dana Brooke, Emma, Alexa Bliss, Blue Pants, Carmella, Eva Marie (unfortunately) and some of the other younger talents coming up.    I think it's finally time.

Kevin Owens is an essential part of every WWE show right now and soon enough he might get to be too much.   He needs to be off of NXT now and focus on the main roster and so I really don't see him winning this rematch.   I'm also not entirely sure how they would go about it, but I would love to see a series (not just one, but a series) of matches between Finn Balor and Hideo Itami for the NXT Championship.   Remember when Hideo Itami was written out of storylines with an injury by some mysterious attacker and everyone thought it was Kevin Owens?  Imagine if that person was revealed- somehow- to be Finn Balor.   Think about it: Finn Balor had the most to gain by attacking Hideo Itami.   Finn Balor was frustrated because he won a tournament to get a shot at the title and then lost that match at a set of tapings, which most people have since forgotten about.   Hideo Itami was scheduled to be in a match with Balor and Tyler Breeze.   What if Balor knew he could beat Breeze on his own but didn't think he could defeat Itami in the same match?   What if this was simply Balor's insurance policy to see that he became number one contender again?   Yeah, the same Finn Balor who debuted in NXT with Hideo Itami and their first matches together as a tag team.   It would certainly make for the most interesting storytelling and so that is where we need to go.   Not quite yet, but eventually.