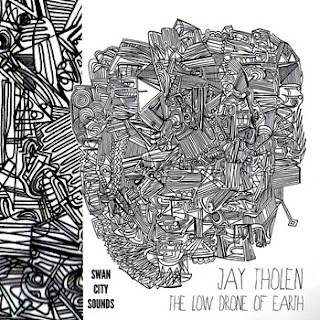 Jay Tholen is a strange dude.   I say that only as a reflection of his music mind you; I don’t know him personally.    These songs could be the Flaming Lips, only they’re not.   They cross borders from Blue October (at least vocally on the titular track) to the song “Before the World Began” being about Jesus.

This is such an interesting take on the redefining of pop music and Jay Tholen even manages to bust out an instrumental number.    “The Low Drone of Earth” is an album that no matter what end of the spectrum your taste might fall on there is truly something for everyone on here.

At times, some of the songs that lean closer to pop might not translate as well on cassette, but overall I’m going to have to say that I feel like they probably will.
Posted by Joshua Macala at 6:25 AM