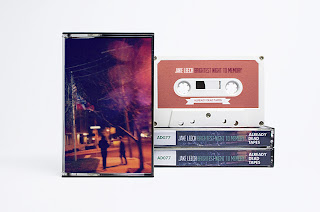 On “Brightest Night to Memory”, Jake Leech displays the powers of instrumental ambient music that have a tendency to favor the FNL.

Not only is this more perfect cassette music (I’m trying to decide on “cassettecore” or “tapecore”), but it is just very well crafted in the overall ambient sense.   There are waves crashing at times behind pianos, synth, church organs and other variations to create a mood.

During interviews recently, I’ve been asking people what their thoughts on ambient music is, in terms of what the word “ambient” means to them.   To me, it’s not about being boring so much an evoking a feeling in someone.

Now, granted, if you’re hopped up on drugs and singing songs about much you hate everyone and everything, it’s going to be pretty easy to bring out the ire in someone.   Ambient music, to me, is a little bit trickier in that it doesn’t go for that cheap heat.

While these songs could be calming, I also see a lot of turmoil in them.  I see someone who is conflicted and that battle is going on within themselves.   I think we can all relate to that on some level, as I’d almost be so bold as to compare this to a Jekyll and Hyde type of piece.

http://alreadydeadtapes.bandcamp.com/album/ad077-jake-leech-brightest-night-to-memory
Posted by Joshua Macala at 6:23 AM