<1> “Moon” – And we begin with a distorted guitar riff ala L7.  And now the vocals kick in, along with some feedback.   This does have a bit of a Delta Dart feel to it, which I really like.  It’s kind of a snotty or bratty rock.   She’s speaking in ways too, about eating popcorn and watching the world pass us by.  This isn’t necessarily metal, but it is quite heavy and loud.  Of course riot grrl sounds come out as well.   And just before the three minute mark, we get a nice little guitar breakdown.   Those notes are pretty.   But then the feedback returns with the chords and it’s a distorted mess right now as she’s practically screaming.   This is so good.  I’d love to see Roberta Bondar live after just hearing this one song.   She almost sounds like she’s screaming through a megaphone. 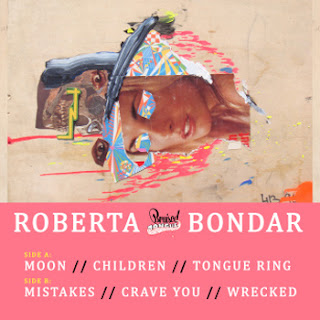 <2> “Children” – Here comes a fun little guitar riff.   I just heard drum sticks, right?   It certainly seems to be building.   And now we come in with some almost post rock guitar sounds.  The distortion from the first song is sadly gone.   And now she sings.   This has some layers to it, huh?  I like this song even though it isn’t distorted yet… Oh wait, now it’s getting there.  The music also reminds me of Local H in ways, just the way this song is structured.
<3> “Tongue Ring” – We’ve got a nice drum beat starting us off here with some beeps.   So far this is instrumental.  Oh, and after the 1:30 mark we’re kicking in.   You know, I’ve been listening to a lot of female fronted rock from when grunge was popular, and so far Roberta Bondar seems like she would fit right in with those tapes and CDs in my collection.   Being next to Juliana Hatfield is never a bad thing.  Unless you’re a McCoy.  Get it?  Ok, moving on.   This is a drum beat you can dance to and it is the closest anyone should get to making a comparison with the Donnas.   And now I hear video game noises.  I wonder if she was recording and someone just came in and started playing Atari and she was like, “Oh well, fuck it, here we go”.   Not too much is happening aside from the constant drumming, some faint vocals and the video games being played.   And now the tempo just picked up.  We might be onto something here.  Oh, and a piano.  This just got kind of scary in ways, but I love it.   Back to my Delta Dart/riot grrl thoughts.   At the six minute mark and my head is spinning.   I feel like I’m in that boat with Willy Wonka and we’re going through the tunnel.   And now making myself dizzy made my head hurt.  I forgot what I was supposed to be writing about.   Monkeys?

<4> “Mistakes” – Onto “Mistakes” aka “Mixtapes”.   Now there is a guy singing with her.  This has that Silversun Pickups sound to it musically.  Kind of like Smashing Pumpkins only not.  This could be the closest that this comes so far to being a song like some other band out there, but I still can’t a basis to compare it with.   And sometimes it can make a difference.   Near the three minute mark we take on an interesting drum turn.   And apparently we are going out western piano style.    I’m going to hit the saloon and be back to finish this review after I win some money and spurs.

<5> “Crave You” – We now begin a bit slower and a bit quieter.    Definitely a change from the previous tracks, so this is probably the ballad of the album.   From what I remember on the track listing, this song is pretty long so I wouldn’t be surprised by a “Bohemian Rhapsody” type turn at some point, but we’ll see.   Three minutes in and it’s still a pretty ballad.   “We had it all and we wasted it”.  Damn straight.    Approaching the 4:30 marker and we’re into a piano bridge.   Five minutes and the piano carries on.  If the tempo picks up with the piano, we could get heavy real soon.   Now we’re drowning out in reverb approaching the 5:30 mark.   And this is probably going to take us all the way to six minutes.    6:30 and we’re still reverb drone.   Seven minutes even.  Is this song coming back or is this how it ends?   Two full minutes of this reverb so far.   Eight minutes and it appears this is how we will end.   Oh, and now I hear some faint beeping coming on, which I totally thought was coming from somewhere outside of the song.  I seriously thought my wife had put on music or something.   And then we get all wiped clean and are barely making noises at the nine minute mark.  And at 9:46 we are done.

<6> “Wrecked” – We’re beginning with a distorted guitar riff.  Can I reference Hole now?  And now the vocals are kicking in and I’m thinking Sharon Van Etten for some reason.   “Things are gone, but you ask for more”   I really do enjoy these lyrics, all around on these six songs.   Oh, and now going into two minutes we’re getting this great static fuzz on the hyper guitar riff.   If The Donnas and/or Yeah Yeah Yeahs want me to listen to them and take them seriously then they should start taking notes from Roberta Bondar.    “Unlike those girls you never found”.   The guitar riff is almost like The Vines, which is sad that I remember The Vines.   How does this song rock so freaking hard?  “I like you out of control”.   Meet too.
Posted by Joshua Macala at 6:56 AM