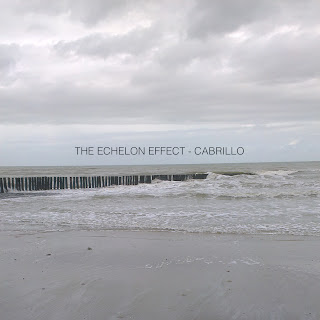 <1> “Shoreline” – And the record begins dreamy.   Then we kick in with some piano notes.   Just past the minute marker, the bass drum beat comes in to join the piano.   And now around a minute and a half we get another addition to the musical family which actually sounds like a keyboard.   And as we approach the two minute mark, some strings come in.   This song is very much FNL right now.  It’s building up.   It’s the great build.   Nearing the three minute mark and we’re pulling back to just strings.    At 3:16 the drum beat and piano return.  We back to where we similarly started.   Right before the four minute mark we get the big beautiful kick in.   This is what it was all building to, this entire song, and now it’s all coming out.   It’s five minutes in and I’m just going to enjoy this.

<2> “Cabrillo” – We begin now with some quiet piano.   This song was actually streaming prior to this EP being released, so people should be somewhat familiar with it by now.   And the bells are coming in.   Ah, the bells.   This remains instrumental post rock, but it is very light and soothing in many ways.  The bells have taken over this song and it is something I want to play while swimming in a pool by myself.

<3> “17 Mile Drive” -  We slowly ease our way into a piano line.   And now the static strings join us.  There is a drum beat, but it sounds more like a foot stomping.   This still has the FNL elements in it, but it definitely picks up where the first song left off, as opposed to the second.   In ways, it feels like the title track was just a little break in between the two main movements on this EP.   It’s either a keyboard or guitar coming through now, I’m not sure.   Now it’s not climbing so much as it’s marching.   The strings just add to this bittersweet overture.   And we fade out.
Posted by Joshua Macala at 7:56 AM