Upon first listening to Ummagma, I actually listened to their self-titled album and then this album, “Antigravity”, back to back.   I do believe I began listening to this one a bit more than the self-titled one, but then I feel like the self-titled one was released first so I did the review first.  (Is that right?  Minions, look that up for me!  Oh, right.  Not Gru.) 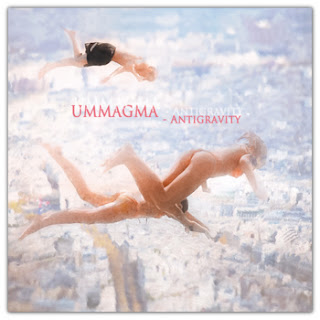 I hear a lot of synth and guitars in these songs.   There are telephone-like noises and what I can best make out to be loops.   It’s not that far of a departure from their self-titled album, but it does have some differences.

I do feel as if “Antigravity” has more male vocals than the self-titled album.  We even get a little bit more acoustic vibes on this album.   Still, you could easily release these two albums side by side as a double vinyl set and I’d be first in line to buy it.  (I know double vinyl exists, so why hasn’t anyone done it yet?)

The most important thing in making more music as a band is to find balance.  You want to keep enough of the sound that made people to like you to begin with, yet not keep it so much similar that people write it off as being merely more of the same.   Also, the second album doesn’t need to necessarily be better than the first so much as that it needs to be different than the first but still equally as good.

I once had a theory about how a follow up album was the hardest album for any band to create and regardless of which came first- the self-titled album or “Antigravity”- they are both good but for different yet similar reasons.   They are everything a pair of albums should be and perhaps the third album will be the toughest challenge for Ummagma.
Posted by Joshua Macala at 8:35 AM